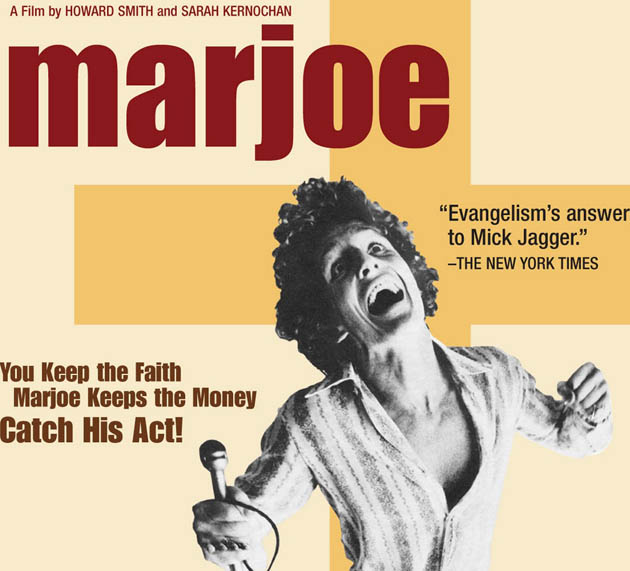 Marjoe Gortner, “Evangelism’s answer to Mick Jagger,” as seen in the poster of the 1972 documentary Marjoe. Sarah Kernochan and Howard Smith’s Oscar-winning film about Evangelical Christian scammers shows how religion, show business, and con artistry have a whole lot in common, as millions of people – whether due to despair, stupidity, and/or madness – are not only willing but eager to be deceived by the industrious snake-oil sales force of God, Inc. A former child preacher, Gortner went on to have a two-decade career in films and on television, including a key role in Mark Robson’s 1974 all-star disaster blockbuster Earthquake.[1]
Contents hide
1. An evening with Sarah Kernochan: ‘Marjoe’ exposes Evangelical Christian crooks
1.1. ‘You Keep the Faith … Marjoe Keeps the Money’
1.2. Marjoe Gortner
1.3. ‘Thoth’: Scantily clad divine inspiration in Central Park
1.4. ‘Mondays Nights with Oscar’
1.5. ‘Earthquake’ cast

“Oscar’s Docs: An Evening with Sarah Kernochan” will kick off the Academy of Motion Picture Arts and Sciences’ 2007 “Monday Nights with Oscar” film series. Kernochan’s two Academy Award-winning documentaries, Marjoe and Thoth, will be screened on Jan. 8, at 7 p.m., at the Academy Theater at Lighthouse International in New York City.

Hosted by historian and journalist Perry L. van der Meer, the Sarah Kernochan evening will include a post-screening chat with the filmmaker.

‘You Keep the Faith … Marjoe Keeps the Money’

When not heard singing hymns such as “Oh, How I Love Jesus” and “Are You Washed in the Blood of the Lamb?” non-believer Marjoe Gortner candidly discusses the tricks of his trade in Marjoe – thus demonstrating that religion is not infrequently indistinguishable from both show business and chicanery. The film’s apt tagline, in fact, was “You Keep the Faith … Marjoe Keeps the Money.”

That may help to explain why this exposé of fraudulent divine messengers was reportedly kept away from movie houses in the obsessively religious – and ungodly profitable – American South.

Update: Sarah Kernochan discusses Marjoe and Evangelical Christian crooks in the December 2014 Vice article/interview “A Look Back at Marjoe, the 1972 Documentary About Evangelical Con Men.”

Born on Jan. 14, 1944, in Long Beach, California, Marjoe Gortner began his Evangelical Christian career as a child preacher, when he was tagged as “The World’s Youngest Minister.”

In the mid-1970s he became a Hollywood actor, going on to appear in about 20 television productions – e..g, the series Fantasy Island and Falcon Crest; the movies The Marcus-Nelson Murders (Kojak pilot) and Mayday at 40,000 Feet! – in addition to low-budget, low-grade big-screen efforts such as Acapulco Gold, The Food of the Gods, Starcrash, Mausoleum, and Hellhole.

Gortner’s most important feature film role was in Mark Robson’s 1974 all-star blockbuster Earthquake, in which he plays Los Angeles store manager/National Guard member Jody Joad, a tough guy with a thing for firearms and bodybuilders.

Thoth spotlights Stephen Kaufman, a.k.a. S.K. Thoth, a performance artist in New York City’s Central Park. To the accompaniment of a violin, the scantily dressed Thoth acts out one-man operas, a.k.a. “prayformances,” in an attempt “to bring divine inspiration and healing to the world.”

The name Thoth refers to the ancient Egyptian deity, a master in divine law generally represented as either an ibis- or a baboon-headed man.

“Monday Nights with Oscar” is a monthly series showcasing “high-quality prints” of Oscar-winning and/or -nominated movies.

The Academy Theater at Lighthouse International is located at 111 East 59th Street in New York City. Tickets cost $5 for the general public and $3 for Academy members and students with a valid ID.

For more information on the “Monday Nights with Oscar” film series, visit www.oscars.org.