Long before Russell Crowe made his first film, Marlon Brando pocketed a reported $3.7 million for two weeks of work on the Richard Donner-directed 1978 version of Superman. Brando’s wages made headlines at the time, being reported as the highest amount (per day) ever paid a performer. As Jor-El, Brando is briefly seen in a few sequences set on Krypton, before his baby boy Kal-El is sent away from the doomed planet. Susannah York played Lara, Kal-El’s mother.

Russell Crowe is in talks to play Jor-El, Superman’s father in Zack Snyder’s Man of Steel. Henry Cavill will play Clark Kent/Superman in this reboot of the story about an alien orphan adopted by earthlings (Kevin Costner and Diane Lane), and who goes on to romance fellow journalist Lois Lane (Amy Adams).

Of late, in addition to getting embroiled in Twitter fights over male genital mutilation (a.k.a. circumcision), Crowe was seen in two 2010 releases: Ridley Scott’s Robin Hood, a box office disappointment in North America but a hit overseas, and Paul Haggis’ The Next Three Days, a box office dud pretty much everywhere.

Crowe will next be seen in RZA’s The Man with the Iron Fists, an action drama set in feudal China.

Correction: A previous version of this post stated that Crowe had reportedly been signed for the part. Not yet. 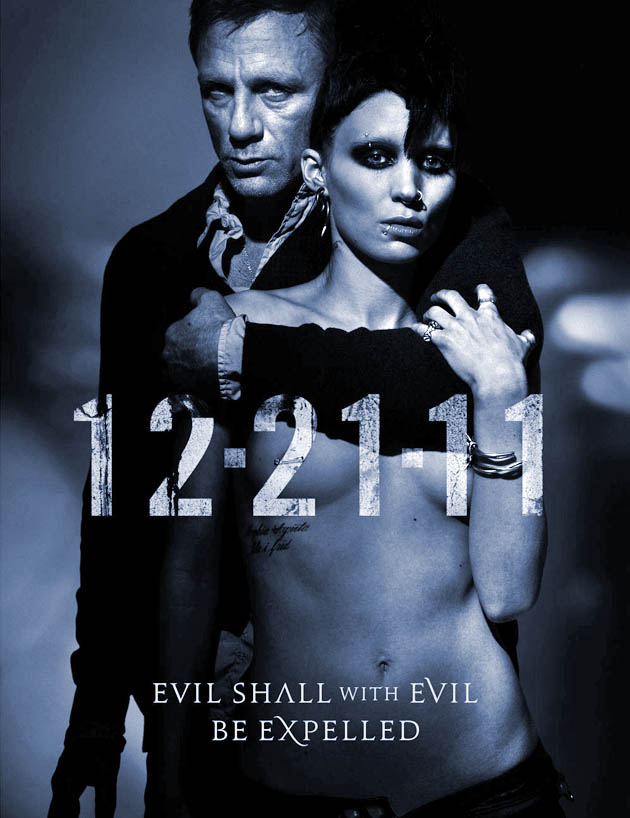 And above you can see what has been described as the film’s “international poster,” which could be titled “The Girl with the Nose Ring and Bare Breasts.”

Of course, one would assume this is not the “international poster” to be displayed in every territory. Hard to imagine something like this being allowed at bus stops in Malaysia or Egypt. But then again, stranger things have happened, so who knows…

Now, I may hate nose rings, but I have nothing against bare breasts or nudity or eroticism. Much to the contrary.

Having said that, I can’t understand how the nearly nude Lisbeth Salander featured in this particular The Girl with the Dragon Tattoo poster is supposed to convey the story’s complex, brooding, deeply wounded woman who uses her brain and her skills to solve crimes.

I should add the “international” The Girl with the Dragon Tattoo poster is actually in black and white. We’ve added a pale blue tint to it to enhance Rooney Mara’s pierced eyebrow…

Huang Jianxin and Han Sanping’s Beginning of the Great Revival

Political propaganda has always been a movie staple, from Rupert Julian’s The Kaiser, the Beast of Berlin, made during World War I, and Leni Riefenstahl’s Nazi-glorifying Triumph of the Will (“Nineteen months after the beginning of the German renaissance, Adolf Hitler once again flew to Nuremberg to review the columns of his devoted followers,” reads one introductory title card) to Leo McCarey’s anti-Red My Son John and Huang Jianxin and Han Sanping’s pro-Red Beginning of the Great Revival.

Featuring an all-star that includes John Woo, Andy Lau, Daniel Wu, Zhou Xun, Chow Yun-fat, and Curse of the Golden Flower‘s Liu Ye as Mao Zedong, Beginning of the Great Revival had its premiere today as part of commemorations for the 90th anniversary of the Chinese Communist Party.

Two years ago, The Founding of a Republic – about how the Communists won power in 1949 – became a major hit in China, collecting $61 million at the domestic box office. Beginning of the Great Revival, which traces the early stages of the revolution that would eventually topple the Chinese emperor, is expected to perform just as well.

Curiously, also in the Beginning of the Great Revival cast is Lust, Caution‘s Tang Wei, who was temporarily blacklisted by the China’s prudish government following her appearance in Ang Lee’s sexually provocative drama.

Sacha Baron Cohen as ‘The Dictator’: Shades of Charles Chaplin?

Sacha Baron Cohen is both a talented, chameleonic comedian and a shameless, relentless, indefatigable ham. (Eminem would surely agree with the second half of the previous sentence.) I can’t help but wonder what it would be like to spend time actually talking to him. Would he be hilarious or tragic? Would he drive one utterly insane after a few minutes?

In the picture above you get to have a “first look” at Sacha Baron Cohen in character as The Dictator in the concisely titled The Dictator: Augusto Pinochet uniform, Fidel Castro beard, Muammar Gaddafi sunglasses, and the hair… Is that an afro, or just his beard upside down?

Either way, there are surely shades of Charles Chaplin in the Adolf Hitler/Nazi Germany parody The Great Dictator (1940), also featuring Jack Oakie in a supporting role as a Benito Mussolini-esque leader. Both Chaplin and Oakie were shortlisted for Academy Awards.

Sacha Baron Cohen’s Borat (a.k.a. Borat: Cultural Learnings of America for Make Benefit Glorious Nation of Kazakhstan) was a major worldwide hit. Brüno, though no flop, was considered a commercial disappointment, taking in about $100 million less than Borat.

Pablo Neruda’s Body May Be Exhumed

Pablo Neruda’s body may be exhumed in Chile following an investigation to reveal whether or not the left-wing poet and author was poisoned by agents of right-wing dictator Augusto Pinochet, reports the Los Angeles Times. Neruda officially died of prostate cancer in 1973, though there have been conflicting reports about the cause of his death.

Last month, the Chilean government ordered the exhumation of the body of former president Salvador Allende. Authorities want to find out whether or not the Marxist Allende committed suicide (the official story) or was murdered by Pinochet and his cohorts in the 1973 coup that deposed the democratically elected president.

The Brave One Box Office: Jodie Foster Thriller Is Weak-Kneed No. 1

Well if this person even red the book you would know that although she is smart and one of the best hackers she ia very sexual. That is why in one book she gets breast in plants and gets naked and goes on top of blomviski in the middle of the night. Lol

Pablo Neruda was a communist activist who caused a lot of damage to the political and economic wellbeing of Chile. He agitated class warfare between chileans and he was a great admirer of the late communist rusian dictator Joseph Stalin, going to the extrems of dedicating a whole poem to the murderous communist tyran. Although he won the Nobel Literature Prize, he was a divisive element in chilean society causing a lot of pain and upheaval among the chilean people. As a chilean of 63 years of age, I do not have any admiration or respect for Pablo Neruda who promoted hate among the chilean people and he was a hard line stalinist communist sympathiser.

In complete agreement with Born Free.

Why, in a free nation, dedicated to the premise of freedom and equality, would we every allow a communist proganda film to be aired in American movie theaters
No matter how subtle, or boring the film, it is still propaganda.
Would we have allowed the Nazi party to show their propoganda films in America during WWII?
Every american should be outraged and write their Congressman.

Born free in the USA