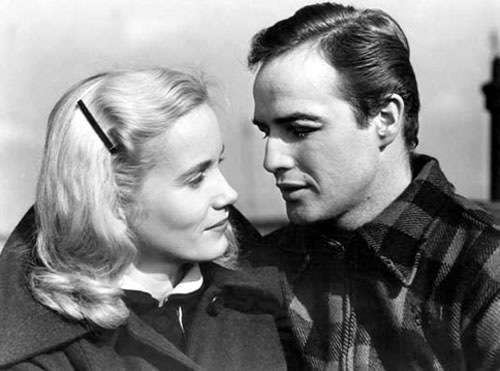 Some find Brando the greatest film actor ever. One assumes those people have never watched a movie with Edward G. Robinson, Pierre Brasseur, Claude Rains, or Max von Sydow.

Anyhow, Brando could be effective – even highly effective. He was excellent in A Streetcar Named Desire and did capable work in Queimada, The Godfather, and Last Tango in Paris.

He could also be godawful: Désirée, The Young Lions, Viva Zapata!, and, especially, as the biker in dire of a reality check in The Wild One.

He delivers a mannered performance as the longshoreman hero in On the Waterfront, the film that earned him his first Best Actor Academy Award. (The second one was for The Godfather.) On the Waterfront, about the aforementioned longshoreman and his fight against corrupt union bosses (he must come out and accuse them), also won Oscars for Best Film, Best Director (Elia Kazan, who’d denounced alleged Communist sympathizers to the House Un-American Activities Committee), Best Story and Screenplay (Budd Schulberg, who’d also named names), Best Supporting Actress (Eva Marie Saint, who delivers the film’s best performance), Best Black-and-White Cinematography (superb work by Boris Kaufman), Best Black-and-White Art Direction (Richard Day), and Best Editing (Gene Milford).

In Pictures Will Talk, a biography of Joseph L. Mankiewicz, author Kenneth L. Geist writes that when “Brando finally invited Mankiewicz to his apartment […] to play him the tape-recorded results of a month’s intensive study of every recorded Shakespearean actor from Barrymore to Olivier,” Mankiewicz remarked that the actor sounded “exactly like June Allyson.” It’s too bad that Brando didn’t retain Allyson’s throaty inflections when Julius Caesar was made; had he done so, his Oscar-nominated Mark Antony would have been more memorable.

The Chase is a heavy drama that was despised by critics at the time. Unsurprisingly, Brando delivers a mannered performance, but Jane Fonda and Robert Redford are surprisingly good. Director Arthur Penn would bounce back the following year with Bonnie and Clyde.

Guys and Dolls is proof positive that Brando was no singer (his role had been intended for Gene Kelly) and that Joseph L. Mankiewicz was no director of musicals.

The Formula is a pedestrian – if timely – mystery melodrama about giant corporations, greed, and gas; while Francis Ford Coppola’s Apocalypse Now is one of those Greatest Films Ever Made that left this viewer hugely disappointed. Martin Sheen, however, is a revelation as the American military man who, while losing his mind, hunts down an American military man who had long lost his mind after gone native in Vietnam. Based on Joseph Conrad’s Heart of Darkness.

Lol! Having June Allyson as Mark Anthony is indeed an irresistible proposition — it’s keeping a big smile on my face.

I promise I’ll take another look at “Julius Caesar.” Though I still think that June Allyson would have made a darn good Mark Anthony.

Let me disagree vehemently on “Julius Caesar” - I thought Brando’s Mark Anthony was powerful to the point of raising your hair (during his speech to the romans). On most of the other counts, well, I’d agree. Especially on “The Wild One” (what were they thinking??) and “Guys and Dolls”, where I’ve eliminated from my memory that it was directed by one of my all-time favorites, Joseph L. Mankiewicz.