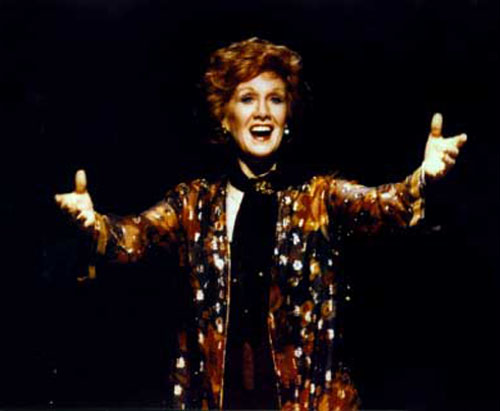 Marni Nixon, the voice behind, among others, Deborah Kerr in The King and I and An Affair to Remember, Natalie Wood in West Side Story, and Audrey Hepburn in My Fair Lady, will be honored at New York City’s Film Forum on Monday, Feb. 23 at 7:30 pm. Nixon, who turns 79 the day before the tribute, will be present for an onstage interview about her seven-decade career. The interview will be conducted by musical theater writer Stephen Cole, co-author of Nixon’s autobiography I Could Have Sung All Night, and Film Forum’s Director of Repertory Programming Bruce Goldstein. Admission is $20 ($10 for Film Forum members).

Every time Marni Nixon’s name comes up I think of the Singin’ in the Rain finale, in which Debbie Reynolds, hiding behind a stage curtain, dubs cockatiel-voiced silent film star Jean Hagen. After all, Nixon worked in (semi)anonymity in Hollywood, as studio contracts reportedly forbade her identity from being revealed.

In addition to the aforementioned actresses, Nixon, dubbed by Time magazine “the ghostess with the mostest,” provided melodious singing voices to the likes of Margaret O’Brien in The Secret Garden and Jeanne Crain in Cheaper by the Dozen. She also hummed for Janet Leigh, provided angelic voices for Ingrid Bergman to hear in Joan of Arc, and dubbed the coloratura parts of Marilyn Monroe’s “Diamonds are a Girl’s Best Friend” number from Gentlemen Prefer Blondes.

On screen, she sang as Sister Sophia in The Sound of Music. (Despite stories to the contrary, Nixon wrote in her autobio that Margery McKay was the singer who sang “Climb Ev’ry Mountain” for Peggy Wood.)

In recent years, Nixon appeared on Broadway in James Joyce’s The Dead, Follies, Nine, and in the City Center’s concert version of Jerome Kern and Oscar Hammerstein II’s Music in the Air.

Not surprisingly, she also happens to be a popular vocal coach.

Copies of I Could Have Sung All Night will be available for sale at Film Forum; Nixon and Cole will be on hand to sign copies in the lobby following the event.

Gene Tierney ‘Leave Her to Heaven’ at Film Forum

I’ve already written about Leave Her to Heaven when it was screened in Los Angeles a couple of years ago, so I’ll just add here that this psychological thriller-melodrama should be watched on the big screen and that the stunningly beautiful Gene Tierney – as a woman who loved too (pathologically) much – was a much better actress than people give her credit for.

Call it a “woman’s film” if you wish, but in its own trash-novel style Leave Her to Heaven is cooler, tougher, and more disturbing than The Maltese Falcon, To Have and Have Not, The Big Sleep, or any other tough-guy Humphrey Bogart movie I’ve seen.

Directed by John M. Stahl, who’d been around since the mid-1910s and who was better known as a director of weepies (Back Street, Only Yesterday, Imitation of Life, Magnificent Obsession), Leave Her to Heaven also features Cornel Wilde, Jeanne Crain, Vincent Price, Ray Collins, and Darryl Hickman. Screenplay by Jo Swerling from Ben Ames Williams’ novel. Superb Technicolor cinematography by Leon Shamroy. Music by Alfred Newman.

Restored by the Academy Film Archive in cooperation with 20th Century Fox, with funding provided by The Film Foundation. Approx. 110 min.

Martha Stewart Not Dead Despite Reports to the Contrary - UPDATE: Stewart died in February...