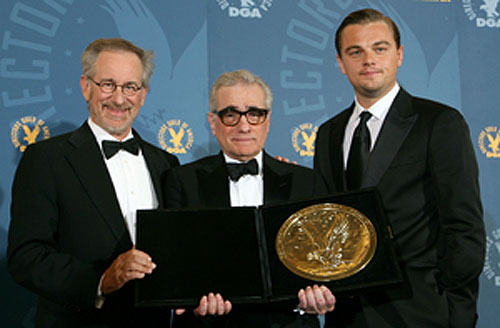 Well on his way to his first Academy Award, last night Martin Scorsese received the Directors Guild of America’s feature-film top honors for The Departed, Scorsese’s way overrated I-can-smell-a-rat gangster flick that the director himself has referred to as his “B-movie.” (And despite the presence of stellar names such as Leonardo DiCaprio, Matt Damon, and Jack Nicholson, that’s really what The Departed is – though without the flair of some of the better crime B’s of the 1940s and 1950s.)

Needless to say, Scorsese’s DGA win – much like his by now inevitable Oscar win – should be seen as a career award instead of recognition for a single achievement. It was Scorsese’s seventh DGA nomination, his first win for an individual film (he had previously won a Lifetime Achievement Award in 2003); at the Oscars, it’s Scorsese’s sixth nod, and it will be his first win.

“I was just trying to make a good picture,” the director told the crowd at the Hyatt Regency Century Plaza Hotel in Los Angeles. “I didn’t think I’d be standing here tonight. … But it is the first movie I have ever done with a plot.” (A strange remark, considering that most of Scorsese’s films do have some kind of – however meandering – storyline.)

Scorsese also thanked 1950s crime directors Samuel Fuller, Robert Aldrich, and Don Siegel. (As an aside, Fuller’s 1953 Pickup on South Street is a B-movie that works beautifully. Why can’t Scorsese remake it with Leonardo DiCaprio in the old Richard Widmark role, Matt Damon all made up to look like Jean Peters, and Jack Nicholson in drag as bag lady Thelma Ritter? That would be one for the ages.)

Among the evening’s other winners were: best documentary director Arunas Matelis, for the little-talked about Before Flying Back to the Earth (above), which depicts the plight of leukemia patients at a children’s hospital in Vilnius, Lithuania, and best TV-movie director Walter Hill, for the miniseries Broken Trail, starring Robert Duvall and Thomas Haden Church as two cowboys who unexpectedly find themselves in charge of five abandoned Chinese girls.

Matelis’ victory was quite a surprise, as his documentary beat two much-touted Oscar nominees, Amy Berg’s Deliver Us from Evil, about a pedophilic priest, and James Longley’s Iraq in Fragments, a portrait of the Iraq War hell as seen through the eyes of ordinary Iraqis.

Beyoncé Knowles will perform “Listen” (music by Henry Krieger and Scott Cutler, lyric by Anne Preven), one of three Original Song nominees from the musical Dreamgirls.

Jennifer Hudson will be singing “Love You I Do” (music by Henry Krieger and lyric by Siedah Garrett), also from Dreamgirls.

Melissa Etheridge will perform “I Need to Wake Up” from the global-warming documentary feature An Inconvenient Truth. Etheridge wrote the music and lyric for the nominated song.

Accompanied by singer-guitarist James Taylor, Randy Newman will perform his own “Our Town” from the animated feature Cars. Newman wrote both the music and lyric for “Our Town,” and also composed the film’s score. Cars is up for a best animated feature Academy Award.

The Oscar ceremony will be held next Sunday, Feb. 25, at the Kodak Theatre at Hollywood & Highland Center. It will be aired live by ABC at 5 p.m. PST (8 p.m. EST), beginning with a half-hour red-carpet arrivals segment during which you can watch both the interviewers and the stars make fools of themselves.

AMPAS has announced the – supposedly complete – roster of presenters at the upcoming Oscar ceremony, which will be held next Sunday, Feb. 25, at the Kodak Theatre at Hollywood & Highland Center.

As per the above list, no one who began working in films prior to 1970 will be giving out any awards. The veteran-est of the presenters is Diane Keaton, whose first film, Lovers and Other Strangers, came out in 1970.

Update: With the addition of Helen Mirren, Jack Nicholson, and Catherine Deneuve to the list of presenters, there will be three pre-1970 film veterans handing out awards or introducing film clips next Sunday. Mirren (though mostly a stage and TV actress) started in films in 1967; Nicholson in 1958; and Deneuve, now the veteran-est, in 1957.

Mexican-born Emmanuel Lubezki, one of filmdom’s top cinematographers, became the third non-American in a row to win the American Society of Cinematographers (ASC) feature-film award for his work in the Anglo-American production Children of Men.

According to Variety, Lubezki’s win “further establish[es] the internationalization of a body that started doling out its own kudos partly in response to the large number of overseas cinematographers, many British, who were winning Oscars.”

The trade magazine also names Mexico “as a hotbed of cinematic talent.” Both Rodrigo Prieto (whose work on Babel has been highly praised) and Guillermo Navarro (who’s up for an Academy Award for El Laberinto del fauno / Pan’s Labyrinth) also hail from Mexico.

The 21st ASC award winners were announced at the Hyatt Regency Century Plaza Hotel in Los Angeles on February 18, 2007.

Filmmaker of the Year: Quentin Tarantino

The Academy of Motion Picture Arts and Sciences will for the first time present the 2007 Oscar nominees in the make-up category at a special symposium at 2 p.m. on Saturday, Feb. 24, at the Academy’s Linwood Dunn Theater in Hollywood.

The Make-Up Symposium will be hosted by Make-Up Branch Governor Leonard Engelman, whose film credits include The Witches of Eastwick, Batman Forever, and How the Grinch Stole Christmas.

The event will screen clips of each nominated film, and audience members will be able to ask questions to the nominated make-up artists (subject to availability), who will also take part in a panel discussion.

The 2007 nominees for Achievement in Make-Up are:

Free advance tickets to the Make-Up Symposium are necessary to secure admission. There is a two-ticket per person limit. Tickets will be available beginning February 1 at the Academy’s ticket office. For ticket order information, call (310) 247-3600 or visit the Academy’s website.

Doors open at 1 p.m. All seating is unreserved. The Academy’s ticket office is located at its headquarters at 8949 Wilshire Boulevard in Beverly Hills.

The Linwood Dunn Theater is located at the Academy’s Pickford Center for Motion Picture Study at 1313 North Vine Street in Hollywood. Free parking is available behind the building through the entrance on Homewood Avenue. For more information, call (310) 247-3600.

The Academy Awards ceremony will be held on Sunday, Feb. 25, at the Kodak Theatre at Hollywood & Highland Center.

The New York City version of the Academy of Motion Picture Arts and Sciences’ annual “Shorts!” program, featuring the year’s Oscar-nominated narrative short films, will be presented on Saturday, Feb. 17, at 12 p.m. and 4 p.m. at the Academy Theater.

The screenings will be hosted by none other than Robert Osborne, Hollywood Reporter columnist, Turner Classic Movies host, and official biographer of the Academy Awards.

The screening films are:

Tickets for “Shorts!” are $5 for the general public and $3 for Academy members and students with a valid ID. All seating is unreserved. Tickets may be reserved by calling 1-888-778-7575. Depending on availability, tickets may be purchased the day of the screenings. Doors open at 11:30 a.m. The Academy Theater is located at 111 East 59th Street in New York City.

On the small-screen side, Ed Greene, a sound mixer for TV shows and the winner of 19 Emmys, will receive the Career Achievement Award.

Update: The 2007 Cinema Audio Society winners were announced on Feb. 17 at the Biltmore Bowl in the Millennium-Biltmore Hotel in Los Angeles. The winning feature was Dreamgirls, courtesy of re-recording mixers Michael Minkler and Bob Beemer, and production mixer Willie D. Burton.

With special effects provided by Industrial Light & Magic, Pirates of the Caribbean: Dead Man’s Chest won in six categories at the 2007 Visual Effects Society awards ceremony held at the Kodak Grand Ballroom at Hollywood and Highland in Los Angeles. Massacred by critics, the adventure tale starring Johnny Depp and Orlando Bloom was a big box office hit nonetheless. Perhaps presenter John Landis was thinking of the night’s big winner while remarking about the difference between old and new movies with special effects. Landis said that when he started working in movies, effects-oriented films were often quite good until the monster or spaceship showed up on-screen. “Today, you see absolutely amazing [VFX] work. The difference is the movies are shit.”

† Category dropped after it was decided that entries were ineligible.

Yes, I’ve not seen the film, but from the reviews his declension from Gangs to Aviator to this is likely. I smell a career win coming.