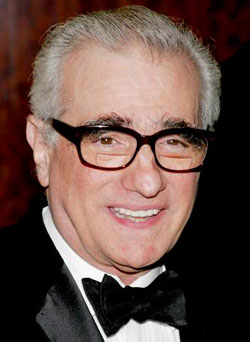 Unless things change dramatically (apart from environmental chaos and apocalyptic wars), 30 or 40 years from now Martin Scorsese is going to be the best-remembered name of the current top-five Oscar directors for actors. (The others being William Wyler, Elia Kazan, George Cukor, and Fred Zinnemann.)

In addition to having the most recent career – cultural amnesia is invariably a factor – Scorsese is the single director among the top five whose films can been categorized as belonging to a particular genre. Better yet, Scorsese’s forte is that much-revered tough guy cinema.

His first male muse, Robert De Niro, becomes a hero after slaughtering unsavory figures from the New York underworld in Taxi Driver. In 1980, De Niro was back as brutish boxer Jake LaMotta in Raging Bull, in my humble opinion one of the most overrated movies of the 20th century. And in 1991, De Niro was it again as a psychopathic ex-con in Cape Fear.

Even Jerry Lewis comes across as a tough guy in The King of Comedy, while Matt Damon and Tom Cruise almost come across as such in, respectively, The Departed and The Color of Money.

Willem Dafoe’s conflicted Jesus in The Last Temptation of Christ and Griffin Dunne’s hapless office worker in After Hours are a couple of exceptions to this rule.

As for the quality of the performances of them tough guys, those range from the terrible (Nicholson in The Departed) to the terrific (Day-Lewis in Gangs of New York).

Women, when they actually have roles in Scorsese’s films, can be either highly effective (Jodie Foster in Taxi Driver, Vera Farmiga in The Departed, Catherine O’Hara in After Hours) or highly ineffectual (Cameron Diaz in Gangs of New York, Winona Ryder in The Age of Innocence, Kate Beckinsale in The Aviator).

On the bright side, the actresses’ generally underwritten roles leave them less room to ham it up à la Nicholson, De Niro, Keitel, et al. A glaring exception to this particular rule, however, is Cate Blanchett’s mimicry of Katharine Hepburn in The Aviator.

Scorsese’s performers earned a total of twenty Academy Award nominations, including five wins. Somewhat surprisingly, ten of the nominees and two of the winners are women. But then again, of those ten female nominees, eight were in supporting roles, whereas seven of the male nominees were leads.

It’s unlikely that Scorsese will ever beat William Wyler’s record (36 acting nominations), but in the next few years he could easily become No. 2 on the list.

Note: A version of this Martin Scorsese article was initially posted in January 2007.

* Paul Newman, The Color of Money

FYI, Scorsese has directed Oscar winning performances in all 4 acting categories; I think William Wyler and Elia Kazan are the only other directors who have accomplished that.

Maybe I’m weird, but as great as it was when Scorsese won his Oscar, I kind of didn’t want him to win. Why? Because it put him in the same category as Hitchcock, Kubrick, and Welles - greats who never won the director Oscar, yet three whose work is considered among the greatest of all time.

That, and I always felt that the Oscars are a kind of popularity contest, anyways.

True, “The Age of Innocence” offers two strong women, though I wasn’t crazy about Ryder’s performance.

I haven’t watched “Casino,” yet, but from what I’ve heard Sharon Stone is quite good in her role.

And you can add me to the list of those who’d like Scorsese to offer more strong roles for women (foaming-at-the-mouth or no) in his films.

Re: Soares’ article: There some excellent and funny assessment’s of Scorcese’s characters (I especially liked the “deranged thug” label)! Speaking of those, how could he have left out Ray Liotta as Henry Hill in “Goodfellas”? It always mystified me that Pesci (whom I like, but not nearly as much as in “Casino”) got the Oscar nomination and not Liotta. But then, the latter has been overlooked far too often.

As for the lack of female roles that match those for males, I basically concur, but NOT when it comes to their strength. First of all, Sharon Stone, as Ginger in “Casino”, “hammed it up” and was every bit as crazed, demanding and in her own way, thug-like (yet pathetic) as most of Scorcese’s male bad-asses!

Her husband, DeNiro’s Ace Rothstein, is actually afraid of her, no matter how much he controls her with money and idle threats. During one of her rages, that lasts for hours, Rothstein actually calls for back-up (Don Rickle’s character, toting a shotgun, and then the police!).Stone’s performance is a powerhouse, right up until her tragic end.

Cate Blanchett as Katherine Hepburn, was a BIT too much (sounding more like she came from New Orleans than Connecticut, in her attempt to capture the Yankee, upper-class drawl). But her character’s sense of self, her vanity and assurance humbled and emasculated DeCaprio’s Hughes, just as much as Ginger’s coke-fueled tirades and assaults did to Rothstein!

In “The Age of Innocence”, there are actually TWO powerful women, Michelle Pfeiffer’s Ellen Olenska and Winona Ryder’s May, but powerful in a very different way. Though, through the lens of 19th Century manners, they SEEM demure and powerless, make no mistake; they war over the witless, gutless Newland Archer’s soul like two lionesses disguised in corsets, silk and lace! Their very propriety, especially May’s icy determination, delude the prey (Daniel Day Lewis’ Archer) into finally succumbing, out of sheer exhaustion.

This just goes to show that, when Scorcese WANTS to, his women are just as thuggery and “foaming at the mouth” as are his male characters. I, for one, would like to see more of this!