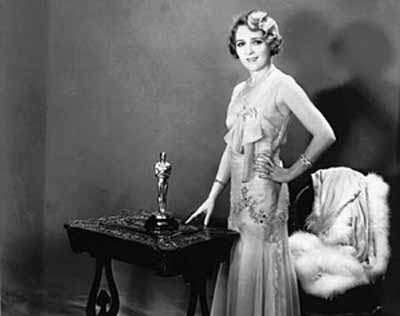 Mary Pickford and Oscar statuette – at the time known only as “Academy Award.”

This week, the Academy of Motion Pictures Arts and Sciences sued the heirs of actor Charles “Buddy” Rogers’ second wife. The point of contention is Mary Pickford’s best actress Oscar, the first for an actress in a talkie, which she won for the 1929 release Coquette.

The case is a bit complicated.

At the time she won her Oscar, Pickford, one of the Academy’s founding members, was the wife of Douglas Fairbanks, living in the couple’s fairy-tale mansion in Beverly Hills. After her un-fairy-tale-ish divorce from Fairbanks in the 1930s, Pickford married Buddy Rogers, whose film career was then in the doldrums. (Pickford herself retired from film acting in 1933.) They remained married until Pickford’s death in 1979.

In the early 1950s, the Academy instituted a bylaw stipulating that Oscar winners would be able to sell their statuettes only after offering them back to the Academy for US$10. This bylaw was not retroactive, meaning that previous Oscar winners were free to sell their Oscars to the highest bidder. (According to a Seattle Times article, prices have ranged from $50,000 to $1.5 million. )

And here’s the glitch:

At the 1976 Oscar ceremony, Pickford was given a special Oscar for her contributions to the art of motion pictures. When she accepted her honorary Oscar at her Beverly Hills home, the actress, then in her eighties, seemed not only quite frail but also a bit incoherent. According to the Academy, at that time Pickford signed an agreement stating that neither of her statuettes could ever be auctioned.

After Pickford died, Rogers remarried. Following Rogers’ death, his widow inherited his belongings. The second wife died last January, and in her will she requested that Pickford’s Oscar for Coquette be sold and proceeds (estimated by a family member to be around $500,000) be given to the Buddy Rogers Youth Symphony in Palm Springs, Calif., and to other charities dedicated to the welfare of young actors.

And the winner will be decided at the Los Angeles Superior Court.

Pickford’s Oscar, by the way, was for what must have been one of the worst performances in the pioneer actress’ distinguished career. Her shrill Southern belle in Coquette, in fact, may well be the very worst performance to result in an Academy Award win in the best actress category.

As a teenager in the late 1970s, I was invited to Pickfair by Buddy and my friend, Valerie SoRelle, who was Mary and Buddy’s long-time friend and spent a lot of her childhood at Pickfair. I remember having picnics by the swimming pool, viewing Chaplin’s graffiti on the changing room walls, checking out Valentino’s swords in the basement, etc. It was a beautiful place and I got a piece of Mary’s hair as a momento! Mary, by the way, wasn’t drunk and I don’t think she is incoherent when she received the honorary Academy Award. I thought she did pretty good. The staff at Pickfair loved working there: I talked a lot with Margaret Granger — Mary’s cook since the 1920s, and heard a few good stories in the kitchen. Mary and Buddy seemed geniunely kind caring and generous people. Too bad they’re gone now.