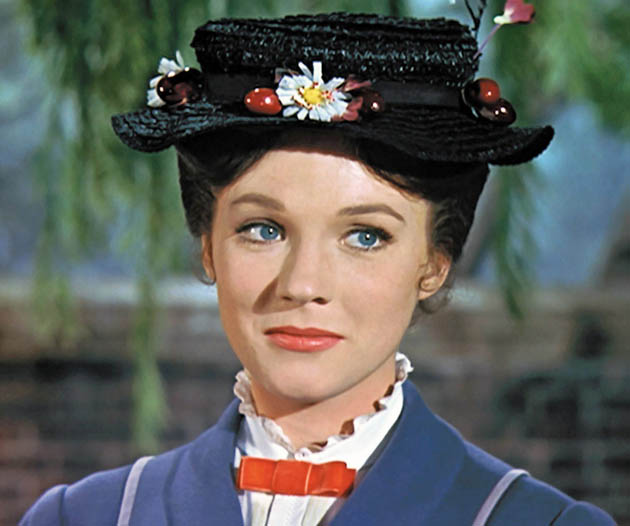 The powers-that-be at the United States’ Library of Congress have chosen to give the Walt Disney Studios a little support. Directed by John Lee Hancock (of the “family” blockbuster The Blind Side), and starring Tom Hanks as Walt Disney and Emma Thompson as Mary Poppins author P.L. Travers, Saving Mr. Banks opened to solid – though hardly outstanding – box office numbers at 15 North American venues last Friday, Dec. 13.

On Wednesday, Dec. 18, the Library of Congress announced that Mary Poppins (1964) – the tale of a mysterious nanny/governess who cures the ails of a dysfunctional, upper-class, early 20th century London family – had been included among the 25 movies added to the National Film Registry “to be preserved as cinematic treasures for generations to come.”

Directed by Robert Stevenson, Mary Poppins remains one of the biggest blockbusters ever, along the way earning Hollywood newcomer Julie Andrews a Best Actress Academy Award.

Now, will public money be used to help “preserve” – the currently pristine-looking – Mary Poppins? If so, does that mean “preserved” Mary Poppins prints will fall into the public domain?

You must be out of your mind if you think so. That’s not quite how intellectual property law works.

What’s more, you’ll be dealing with Disney, which, despite all the “public’s interest” b.s. found in Saving Mr. Banks, protects its own properties with the fierceness of a Mama Cobra. (This Boing Boing article on Disney’s Christmas Spirit is worth a read. Check out: “Disney’s Rights to Mickey Mouse Questioned.”)

Also worth noting, Mary Poppins turns 50 next year. Expect Disney to come up with 50th Anniversary Blu-ray editions featuring the tagline “National Film Registry Inductee” or some such.

And here’s wondering what P.L. Travers would have thought of Mary Poppins being added to the list. She hated Walt Disney’s movie adaptation of her story.

Besides Julie Andrews – who got to play the flying nanny after being bypassed for the role of Eliza Doolittle in Warner Bros.’ My Fair Lady – Mary Poppins features:

Bill Walsh and Don DaGradi were credited for the screenplay adaptation. Robert B. and Richard M. Sherman wrote the song score.

Only a handful of titles truly in need of preservation

Curiosities on this year’s National Film Registry list include:

According to a report issued by the Library of Congress itself, approximately 70 percent of all American silent feature films have been lost, destroyed, or left to rot.

Don’t expect this year’s token inclusion of Daughter of Dawn, The Virtuous Vamp, and Ella Cinders to stem the very real threat to that key segment of early 20th century American culture.

By the way, will the Universal-owned, hard-to-find King of Jazz become available for viewing, now that it’s a National Film Registry inductee?

Less politically correct is the (unsurprising) absence of any gay/lesbian/bi/tri/etc.-themed film, unless you consider Charles Vidor’s Gilda to be one such, what with good-looking Glenn Ford torn between former flame Rita Hayworth and her husband, Buenos Aires casino owner George Macready.

Or perhaps Pulp Fiction, which features a minor character who happens to be a (gay?) security guard, a same-sex rapist, and who, much to the delight of audiences, gets shot – with what looks like a handheld cannon – in the stomach by his victim.

Gilda with Rita Hayworth as the glove-throwing, Mame-blaming title character. Charles Vidor’s 1946 romantic film noir Gilda stars Rita Hayworth as a woman like no other: Gilda Mundson, the ravishing new wife of a corrupt Buenos Aires casino owner (George Macready) who also happens to be a Nazi on the side. All the while, she pines for her real love, former flame Johnny Farrell (Glenn Ford), now her husband’s much too devoted right-hand man. Two years after Gilda, Orson Welles would attempt to demythologize the Rita Hayworth screen persona in his box office flop The Lady from Shanghai. Not coincidentally, Hayworth was Welles’ wife from 1943–1947.

Below is the near-complete list of 2013 National Film Registry additions. Mary Poppins has been left out, as its director/cast can be found elsewhere in this article.

The movies – only seven of which are pre-1950 feature films – are listed in chronological order.

Bear in mind that movies must be more than ten years old in order to qualify for the National Film Registry. So, Saving Mr. Banks, for instance, will have to wait until 2024 to be able to join Mary Poppins.

Check out: The Library of Congress’ Packard Campus’ Jan. 2014 movies.