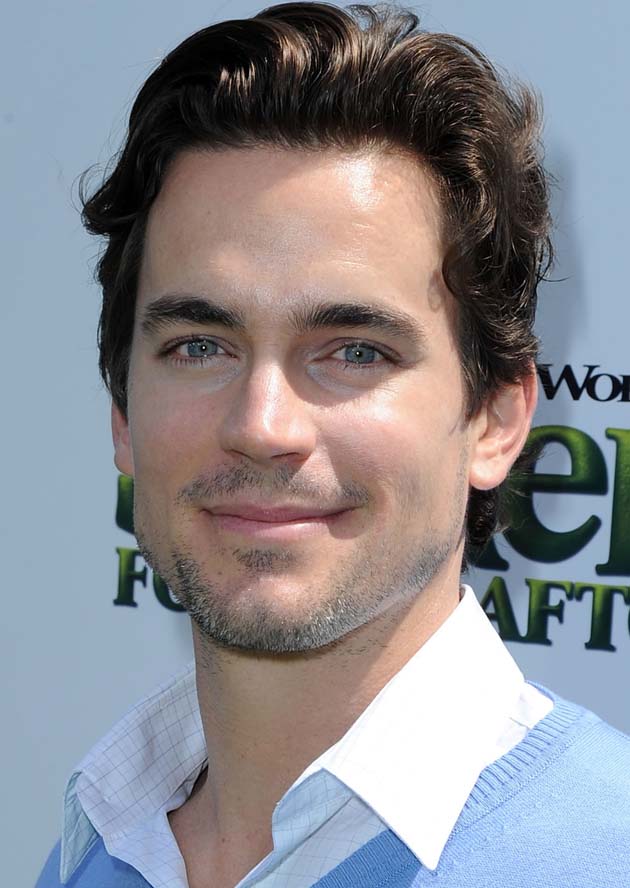 Chuck and White Collar actor Matt Bomer is pictured above at the premiere of DreamWorks Animation’s soon-to-be blockbuster Shrek Forever After. The premiere was held on May 16 at the Gibson Amphitheatre in Universal City, not far from downtown Los Angeles.

Matt Bomer has no role in Shrek, but he has kept himself busy this past decade, chiefly on television. See below.

There aren’t really any “Matt Bomer movies” – in other words, Bomer has never actually starred in a feature film. His only two movie credits to date consist of a minor role in Robert Schwentke’s Flightplan (2005), starring Jodie Foster, and in larger one in Jonathan Liebesman’s The Texas Chainsaw Massacre: The Beginning (2006).

On the small screen, Bomer has been featured in about a half dozen productions. Besides Chuck and White Collar, these include the series Tru Calling and Traveler, and Todd Holland’s TV movie Amy Coyne (2006), toplining Ashley Williams and Tom Berenger.

2016 update: In recent years, Matt Bomer has been featured in more big-screen releases – invariably in supporting roles. See list below. 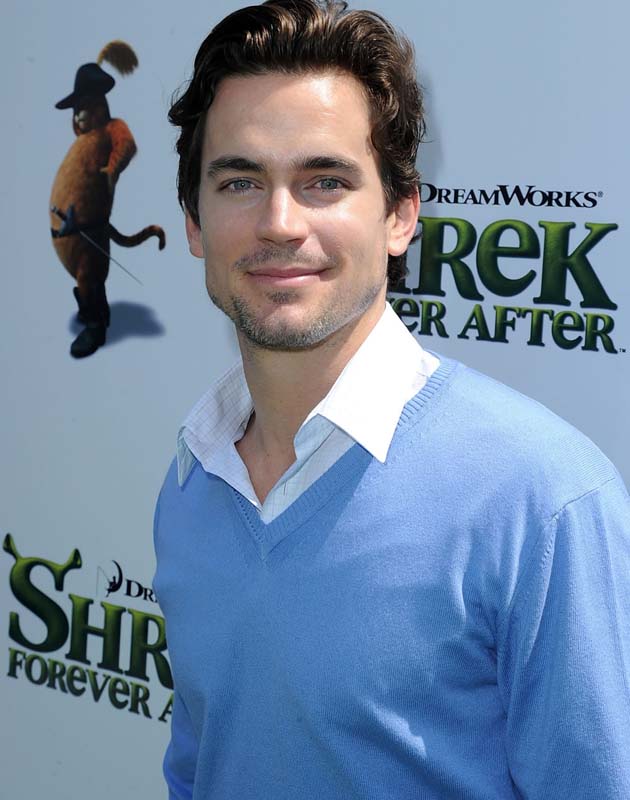 Upcoming Matt Bomer movies – with the actor now featured in larger roles – include:

Additionally, Matt Bomer took home a Golden Globe for Best Supporting Actor in a Series, Mini-Series, or Motion Picture Made for Television for his performance in Ryan Murphy’s The Normal Heart (2014), also featuring Mark Ruffalo, Taylor Kitsch, and Julia Roberts.

And finally, Matt Bomer reportedly almost got to play Superman in what was to have been a Brett Ratner project in the early 2000s. The reasons why Bomer failed to land the title role of what eventually became Man of Steel remains fuzzy. Was that because he was gay? (Or so claimed Jackie Collins using an unnamed studio executive as a source.) Or was that because Ratner was ultimately replaced by Bryan Singer? (Or so claimed another unnamed source “in the business.”)

And never mind the fact that Singer (The Usual Suspects, Valkyrie) also happens to be gay.

“I actually screen-tested for Superman, and there was a time when Brett Ratner and I were going to work together on it,” Bomer explained to MTV. “That particular incarnation of that franchise sort of fell apart, and then it became a whole different beast.”

Brandon Routh starred in that reincarnated “beast,” which was disappointingly received by U.S. critics and (in relation to its exorbitant cost) U.S. audiences, though Man of Steel did fare remarkably well internationally. 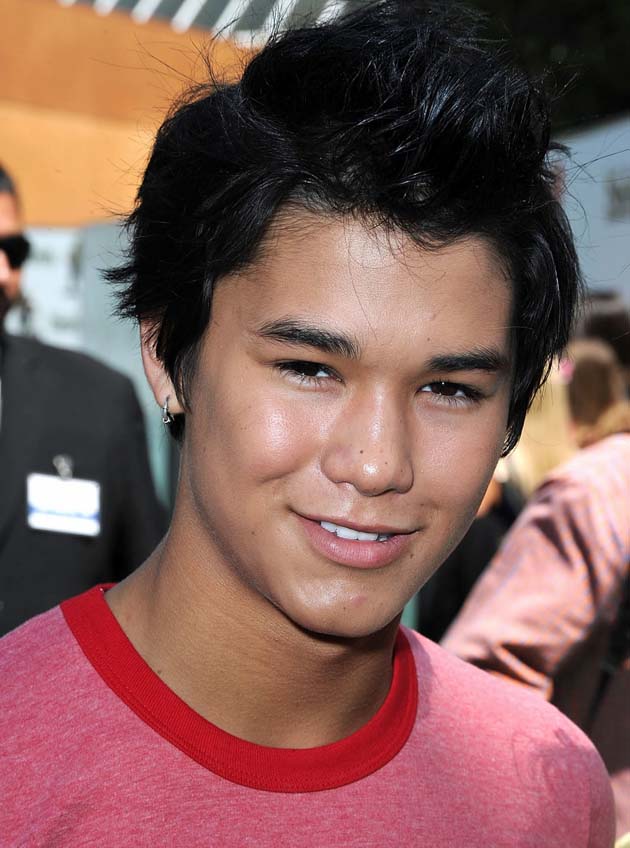 Booboo Stewart, who plays Seth Clearwater (one of the young werewolves) in David Slade’s upcoming The Twilight Saga: Eclipse, arrives at the premiere of DreamWorks Animation’s Shrek Forever After at the Gibson Amphitheatre on May 16, ’10, in Universal City, north of downtown Los Angeles.

Shrek Forever After – along with Christopher Nolan’s Inception, M. Night Shyamalan’s The Last Airbender, and Eclipse, which stars Robert Pattinson, Kristen Stewart, and Taylor Lautner – is one of Hollywood’s most eagerly awaited summer 2010 releases.

Beyond the Twilight Saga franchise, Booboo Stewart’s film credits include the following:

In case the info found on the IMDb is accurate, Booboo Stewart will be seen in a few thousand movies – both shorts and features – in the next year or so. Titles include: 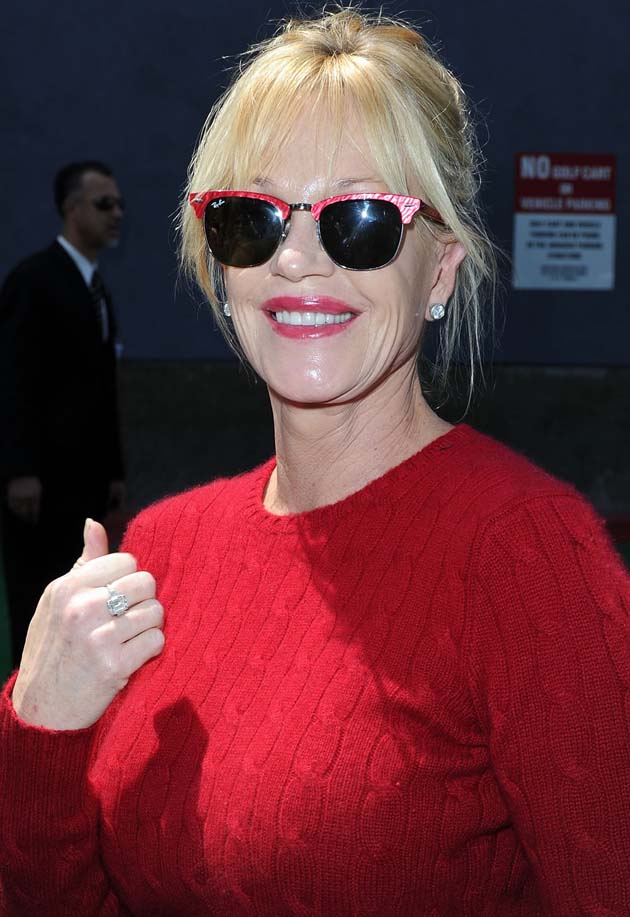 Pictured above is Best Actress Academy Award nominee Melanie Griffith (Working Girl, 1988) arriving at the premiere of DreamWorks Animation’s Shrek Forever After at the Gibson Amphitheatre on May 16, ’10, in Universal City.

In the animated feature, Griffith’s husband, Antonio Banderas, provides the voice of the character Puss in Boots.

Listed below is a quintet of eclectic and notable (for different reasons) Melanie Griffith movies:

Whereas the first three movies were well received by U.S. critics and/or audiences, The Bonfire of the Vanities and Born Yesterday were both critical and box office duds.

One of Melanie Griffith’s Born Yesterday co-stars, Don Johnson, was both her first and third husband. The couple were briefly married in 1976; they were remarried in 1989 and divorced once again in 1996.

In-between the two marriages to Don Johnson, Griffith was married to actor Steven Bauer (Scarface, Thief of Hearts) from 1981–1989.

Working Girl earned Melanie Griffith not only a Best Actress Oscar nod but also a BAFTA nod, a Golden Globe for Best Actress in a Motion Picture Comedy or Musical, and a Boston Society of Film Critics Best Actress Award.

The Oscar winner that year was Jodie Foster, playing a gang rape victim in The Accused.

Update May 2016: Griffith and Don Johnson are the parents of actress Dakota Johnson, whose film credits include 21 Jump Street and Fifty Shades of Grey. 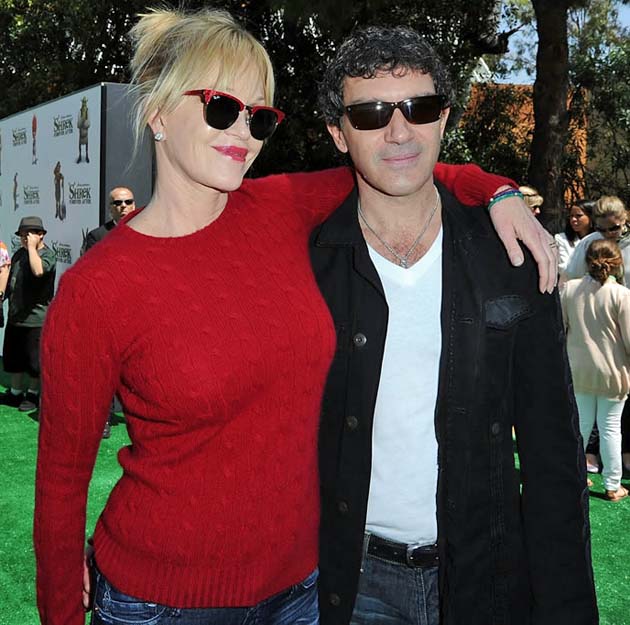 Melanie Griffith and Antonio Banderas were married in 1996. They co-starred in Fernando Trueba’s poorly received, Miami-set comedy Two Much (1995). Additionally, Banderas directed Griffith in the 1999 comedy-drama Crazy in Alabama.

May 2016 update: Melanie Griffith and Antonio Banderas were divorced in 2015.

The fourth feature in the Shrek franchise – following Shrek (2001), Shrek 2 (2004), and Shrek the Third (2007) – Shrek Forever After is one of 2010’s most eagerly anticipated summer releases. Besides Antonio Banderas, the DreamWorks Animation production also made use of the vocal cords of the following performers:

Directed by Mike Mitchell, and written by Josh Klausner and Darren Lemke, Shrek Forever After is scheduled to open in the U.S. on May 21.

Besides Shrek Forever After, fans of mainstream Hollywood fare are also waiting with bated breath for the following summer 2010 releases: 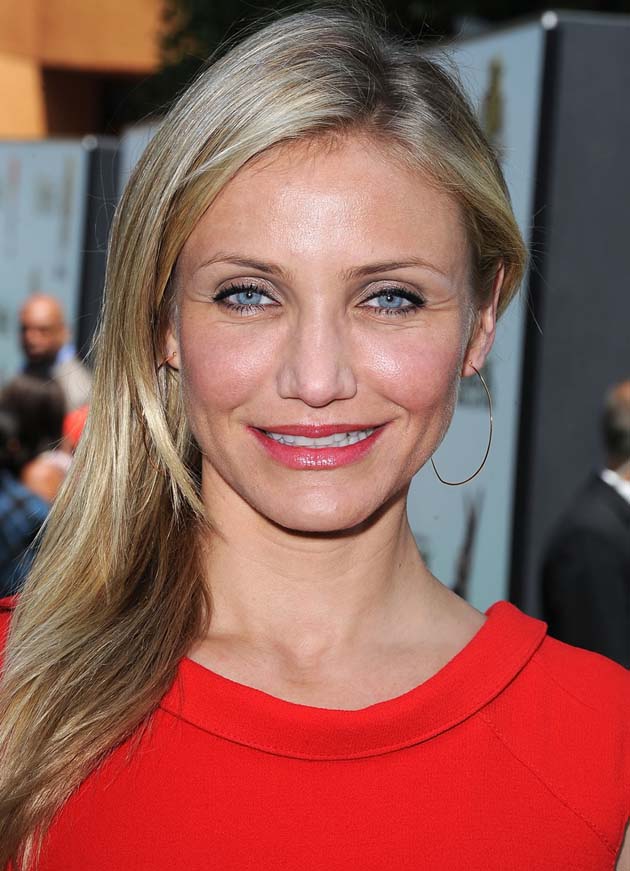 Cameron Diaz, who will next be seen opposite Tom Cruise in James Mangold’s comedy-adventure-thriller Knight and the Day, arrives at the premiere of DreamWorks Animation’s Shrek Forever After at the Gibson Amphitheatre on May 16, ’10, in Universal City.

Diaz provides the voice of Princess Fiona in the animated film directed by Mike Mitchell from a screenplay by Josh Klausner and Darren Lemke.

Listed below are a handful of notable films starring the San Diego-born (Aug. 30, 1972) Cameron Diaz. 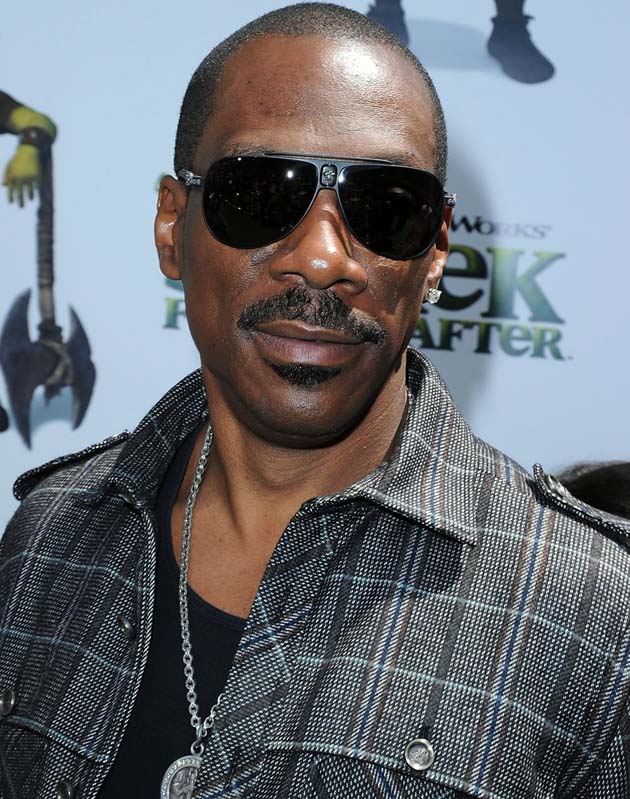 Eddie Murphy, whose movie career has gone from 48 Hrs. and Beverly Hills Cop in the early ’80s to Norbit and Imagine That in the late 2000s, is seen above at the Shrek Forever After premiere.

Other notable Eddie Murphy films include the following:

Jerry Lewis and Rex Harrison starred in the the 1960s originals of, respectively, The Nutty Professor (1963) and Doctor Dolittle (1967).

And see below a couple more images featuring Shrek Forever After cast members at the film’s Los Angeles premiere. 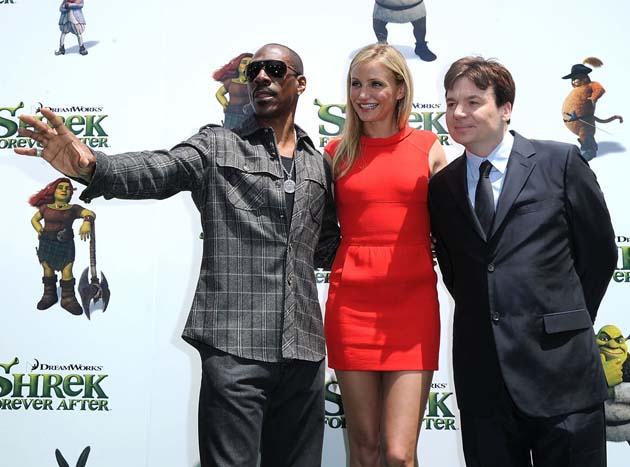 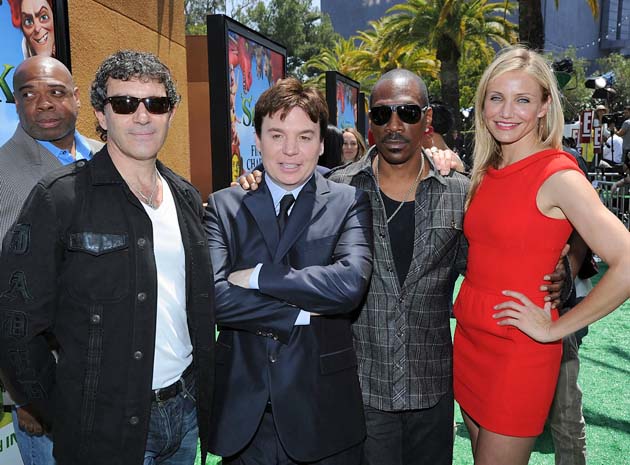 The fourth feature in the Shrek movie franchise – trailing Shrek (2001), Shrek 2 (2004), and Shrek the Third (2007) – Shrek Forever After is one of the year’s most eagerly awaited summer releases, along with:

Besides those of Cameron Diaz, Eddie Murphy, Mike Myers, and Antonio Banderas, Shrek Forever After features the voices of:

Shrek Forever After opens in the U.S. on May 21. 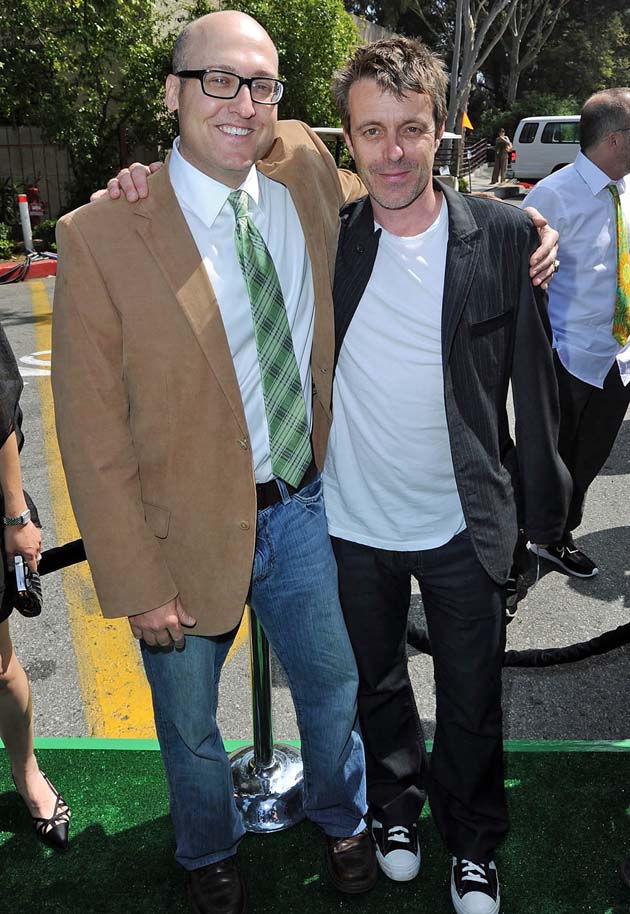 Shrek Forever After director Mike Mitchell and composer Harry Gregson-Williams are seen above as they arrive at the premiere of the DreamWorks Animation feature.

Movies featuring the British-born Harry Gregson-Williams’ music – working solo or with co-composers – include the following:

Harry Gregson-Williams was nominated for a British Academy Award (BAFTA) for Shrek (with co-composer John Powell) and for a Golden Globe for The Chronicles of Narnia: The Lion, the Witch and the Wardrobe.

After a somewhat slow start in North America, DreamWorks Animation’s costly 3D feature How to Train Your Dragon, featuring the voices of Jay Baruchel, Gerard Butler, and America Ferrera, performed quite well at the worldwide box office, becoming one of the biggest hits of the year.

Written by Josh Klausner and Darren Lemke, Shrek Forever After features the voices of:

Shrek Forever After is scheduled to open in the United States on May 21. 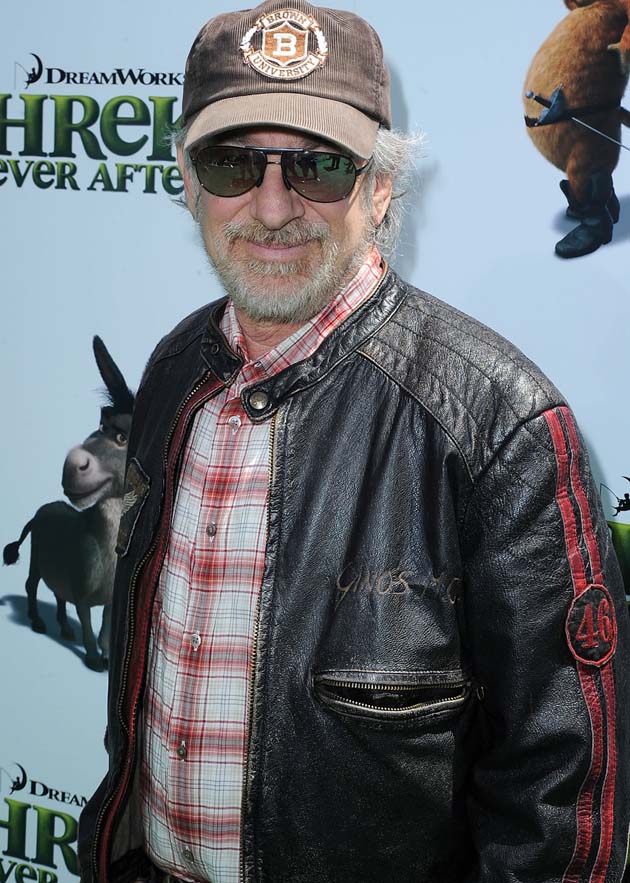 Director/producer Steven Spielberg (Jaws, The Color Purple), whose The Adventures of Tintin: The Secret of the Unicorn is currently in post-production, is seen above as he arrives at the premiere of DreamWorks Animation’s Shrek Forever After. Spielberg, of course, is one of the founders of DreamWorks, now part of Paramount Pictures.

After a somewhat slow start in North America, the costly DreamWorks Animation 3D feature How to Train Your Dragon, featuring the voices of Jay Baruchel, Gerard Butler, and America Ferrera, performed quite well at the global box office, becoming one of the biggest hits of the year.

The fourth feature in the Shrek movie franchise – after Shrek (2001), Shrek 2 (2004), and Shrek the Third (2007) – Shrek Forever After is one of the most eagerly awaited summer releases, along with:

As for Steven Spielberg, he has taken home two Best Director Academy Awards:

Both Schindler’s List and Saving Private Ryan had a World War II setting, though only the latter was a de facto war movie. Besides earning Spielberg the Best Director Oscar, the former also won Best Picture; the Academy of Motion Picture Arts and Sciences’ surprising 1998 Best Picture winner turned out to be John Madden’s Shakespeare in Love, distributed by Miramax. 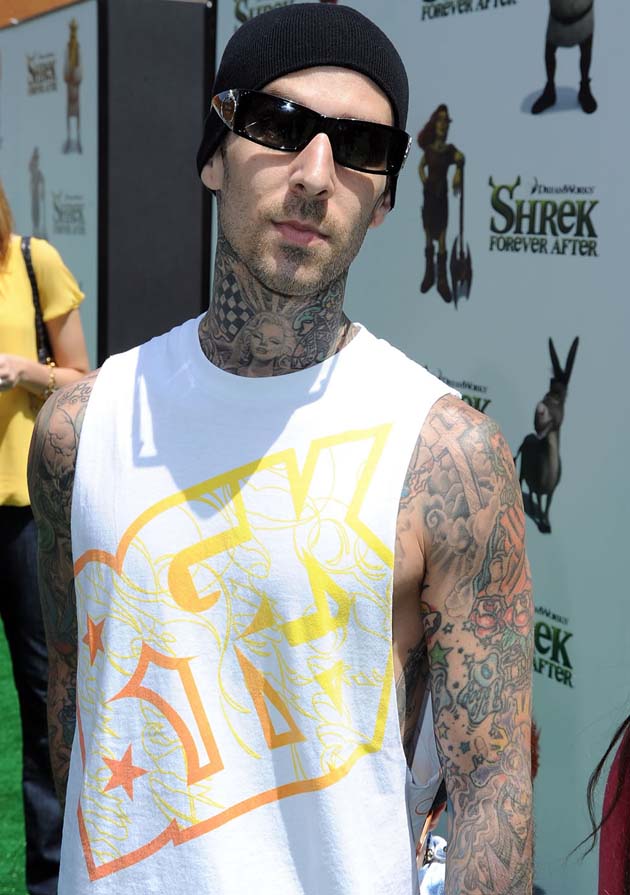 Pictured above is heavily tattooed musician Travis Barker while arriving at the Shrek Forever After premiere.

Barker’s songs have been featured in several motion pictures, among them American Pie, American Pie 2, John Tucker Must Die, and G-Force.

Shrek Forever After features the voices of:

Shrek Forever After opens in the U.S. on May 21.

Box Office: Hellboy II & Journey to the Center of the Earth Desperately Need Some Foreign Aid

Oh! Matt really has to stop wearing that gorgeous shade of blue which brings his eyes out so well - I’m not productive if I’m all melted! <3

Cammie D. is looking old. Is she even 40 yet? It’s too bad because her looks were all she had. Everyone knows she can’t act. Shrek may do well. Knight and Day will flop. Tom Cruise and Cameron D. is like box office poison. They were hot 15 years ago but now they’re not. At least Tom has a studio.