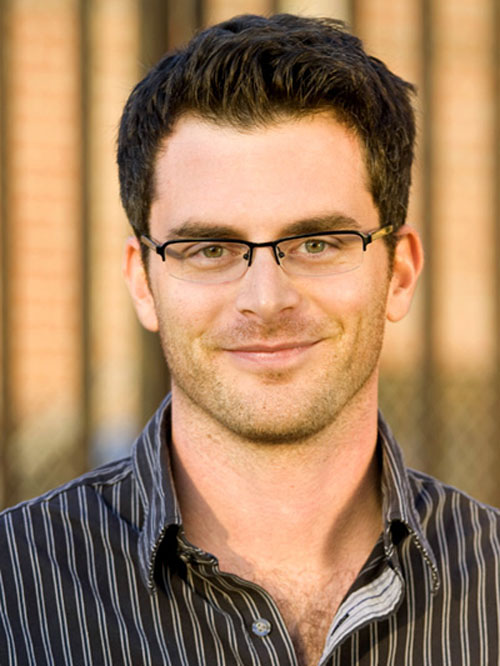 There are few web series that I’ve enjoyed watching; of those, Matt Koval’s “The Fuplers” is probably my favorite. The series chronicles the table-time interactions of your typical Mondo Bizarro family, with Koval playing Mom, Dad, Teen Son, and lithping, pig-tailed Little Daughter.

According to Koval’s profile on his website, in one year his 20-video YouTube channel has grown from 50 to 50,000 subscribers, while “The Fuplers” has been averaging 300,000 views per episode. Additionally, earlier this year Koval wrote and directed a web series for Fox Digital Studios.

The Los Angeles-based filmmaker has also done work away from the Internet. Among his film credits are Ryan Craig’s feature Small Town Saturday Night, starring Star Trek‘s Chris Pine, which Koval shot and co-produced; and a couple of shorts he wrote and directed: Tenth (2002), described as “a story of chance encounters, random acts, and the strangers who drift in and out of our lives,” and the drama The Militant (2006).

Matt Koval (a.k.a. Matt Kovalakides) has kindly agreed to take part in a brief q&a about his webwork for Alt Film Guide. See below.

How did you get started on filmmaking?

It’s the old cliche. I found my grandfather’s Super-8 movie camera in the hall closet when I was 13. I messed around with that, then started making countless short films on video. This is well before the Internet, of course. I was the only teenage filmmaker around. Now they’re everywhere!

“The Fuplers.” How did that come about? How long does it take to write/act in/direct/produce/edit each episode? And any chance of “The Fuplers” evolving into something beyond the YouTube sphere?

The first “Fuplers” was made as an entry into a video contest held by Klondike Bar. I didn’t have time to cast actors in a regular commercial, so I decided to try my hand at playing multiple characters. At the time, it wasn’t meant to be an ongoing series at all … but after uploading the video to YouTube, people demanded more.

It takes about a week to produce one episode. I shoot the characters on different nights.

As for the show evolving into another medium, I’m not sure. I’m really not an actor, so the thought of trying to be the next Tyler Perry or Eddie Murphy seems rather lofty. I’d much rather be sitting in the director’s chair.

Would you say youtube is a solid venue for young filmmakers to “pitch” their talents? What kind of response have you gotten for “The Fuplers”?

I absolutely encourage all filmmakers to get their short films on YouTube. I actually think it’s better exposure than film festivals. I mean, if you get your short accepted into the Slower Lower Delaware Film Festival, you might get what, 200 people to see your work? If so, 199 of them will probably be the other filmmakers and their families, and the 200th guy will be the projectionist.

On the other hand, if you put up the same short online and engage in the YouTube community, it won’t be long before you get 200 views every day. And one of them eventually might be a producer or talent agent.

You’ve said you’re giving the Fuplers a vacation. Do you have any other projects in the works?

Now that I’ve created a successful brand online, I’m putting some of my energy back into mainstream content. I’m writing a TV pilot, and searching for a good comedy script to direct.

Dear Matt,
This is just for you -not the whole internet world out there, please.
You have created something so special with the Fuplers. Each character is unique and memorable. The scripts, though only about two minutes in length, are little masterpieces of humor. There are teenagers creating their own little Fupler skits in homage to you -and that sure says a lot. After watching nearly all that you have done, I always come back to the Fuplers and have repeatedly watched those episodes. You are a talented actor and that’s no ‘lofty’ statement. Write your t.v. pilot and direct your comedy script since that will bring you satisfaction and happiness, but please considering keeping the Fuplers alive for those of us who have received so much happiness from getting to know them.

Go Matt! this is great, hope to see you rising to fame someday.