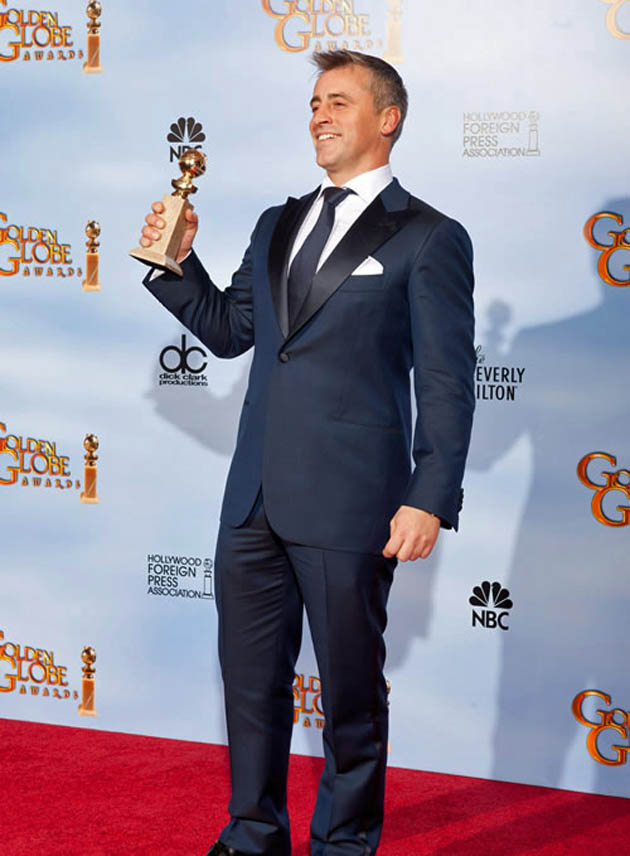 Matt LeBlanc poses backstage in the press room with his Golden Globe Award at the 69th Annual Golden Globes ceremony, held at the Beverly Hilton hotel in Beverly Hills on Sunday, Jan. 15. LeBlanc topped the Best Actor in a Television Series Comedy or Musical category for his performance in the Showtime series Episodes.

LeBlanc’s competition consisted of the following:

To date, he has been featured in only a handful of feature films – none of which did much for his career, and the last of which came out in 2003. Among them are Bill Couturié’s Ed (1996); Stephen Hopkins’ Lost in Space (1998), in Mark Goddard’s old TV role; McG’s Charlie’s Angels (2000) and its sequel, Charlie’s Angels: Full Throttle (2003), opposite Drew Barrymore, Cameron Diaz, and Lucy Liu. 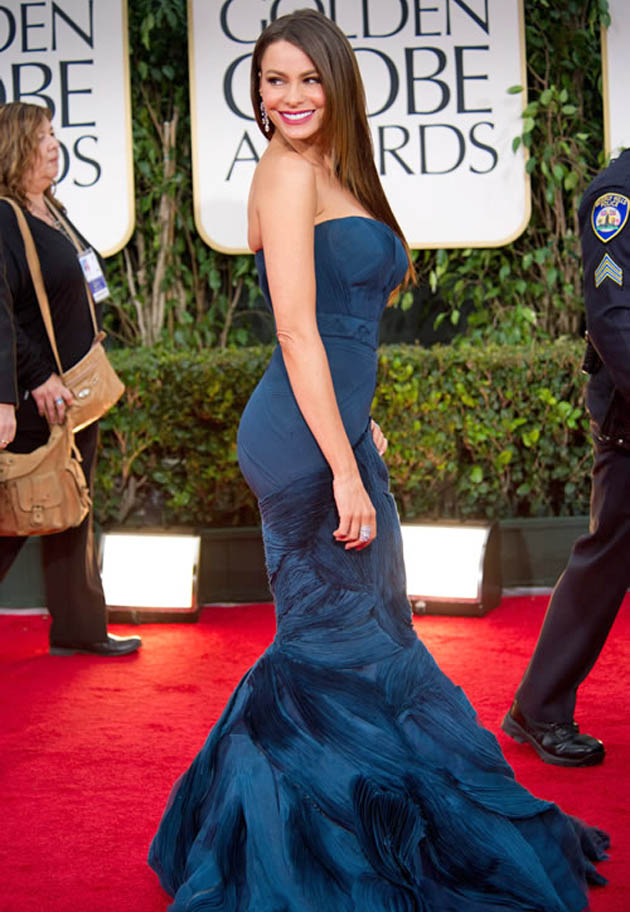 Colombian-born actress Sofia Vergara, nominated for Best Supporting Actress in a Television Series, Miniseries, or Movie for her performance in the ABC comedy series Modern Family, is seen above on the 69th Annual Golden Globes Awards’ Red Carpet outside the Beverly Hilton hotel in Beverly Hills, on Sunday, Jan. 15.

Speaking exuberant Spanish – it made little difference whether or not one could understand her – while doing the greatest Lupe Velez imitation on record (or so says our editor), the Barranquilla native (born on July 10, 1972) stole the Golden Globes show when Modern Family was voted the year’s Best Television Series – Comedy or Musical.

Besides becoming a U.S. household name thanks to Modern Family, Sofia Vergara has also been appearing in movies since 2002 (Barry Sonnenfeld’s Big Trouble). Recent big-screen efforts include:

In addition to Modern Family, since 1995 Sofia Vergara has been seen in more than a dozen television shows, including Colombian, Mexican, and American productions. Titles include:

April 2016 update: To date, Modern Family has been the acme of Sofia Vergara’s acting career, earning her:

Singer, songwriter, actress, director, producer, screenwriter, provocatrice, and all-around showwoman Madonna displays her Golden Globe backstage in the press room at the 69th Golden Globes ceremony on Sunday, Jan. 15 at The Beverly Hilton in Beverly Hills. She won her Golden Globe in the Best Original Song – Motion Picture category for “Masterpiece” from W.E., which she also directed.

“Masterpiece” has music and lyrics by Madonna, Julie Frost and Jimmy Harry.

Elton John’s less than ecstatic reaction – upon hearing Madonna’s name as the Best Original Song winner – was priceless. Less entertaining was Ricky Gervais’ joke (see above) referring to the openly gay (and, admittedly, outrageously flamboyant) singer as a pop music “queen.” The double entendre of sorts was that the pop music queen who was going to present the next award was not Elton John, but Madonna.

Responding to Gervais’ lame joke implying that her sex life didn’t quite reflect her hit song “Like a Virgin,” while on stage Madonna took her own (well rehearsed?) revenge on the Golden Globes ceremony host by referring to him as a “girl”; one who theoretically could take care of her virginity. “If I am still just like a virgin, Ricky,” she began, “why don’t you come over here and do something about it?” She then added, “I haven’t kissed a girl in quite a few years. [pause] On TV.”

Although best known for her songs, concerts, and sound bytes, Madonna has been featured in about 20 films, most of which have flopped with critics and audiences alike.

Among these are Jim Goddard’s Shanghai Surprise, with Sean Penn; Warren Beatty’s Dick Tracy (1990), with Beatty and Al Pacino; Woody Allen’s Shadows and Fog (1991), with Allen and Mia Farrow; Alan Parker’s Evita (1996), with Antonio Banderas and Jonathan Pryce; and John Schlesinger’s The Next Best Thing (2000), with Benjamin Bratt and Rupert Everett.

More recently, Madonna’s voice was featured in the 2006 animated feature Arthur and the Invisibles. 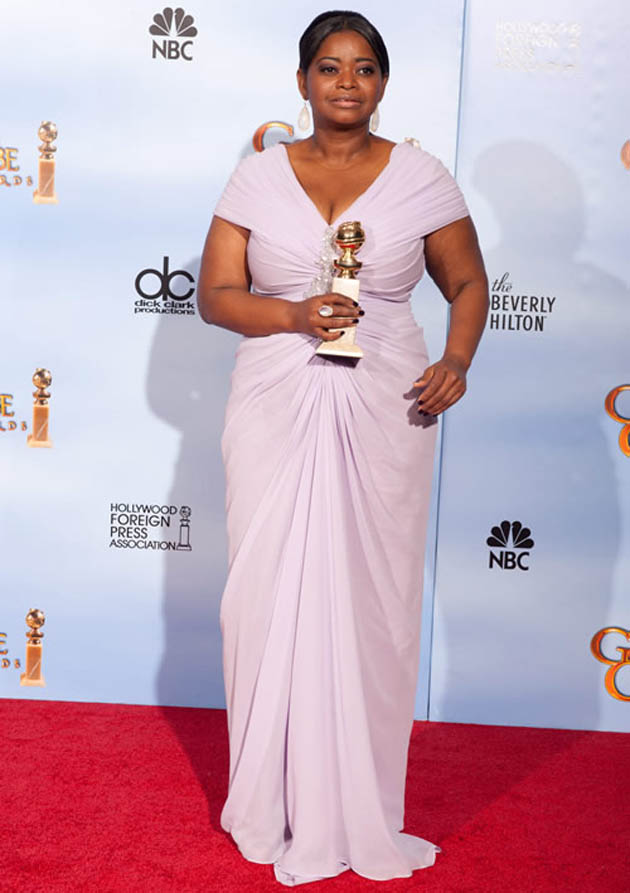 Octavia Spencer took home the Best Supporting Actress in a Motion Picture Golden Globe for her work in Tate Taylor’s socially conscious The Help, a sleeper box office hit in the U.S. Spencer’s competition consisted of the following:

Octavia Spencer is currently the favorite to take home the Best Supporting Actress Oscar, though nothing is certain at this stage.

In addition to Octavia Spencer and Jessica Chastain, The Help features the following performers:

Cicely Tyson, for her part, was nominated in the Best Actress category for Martin Ritt’s drama Sounder (1972). She lost to Liza Minnelli in Bob Fosse’s Cabaret. 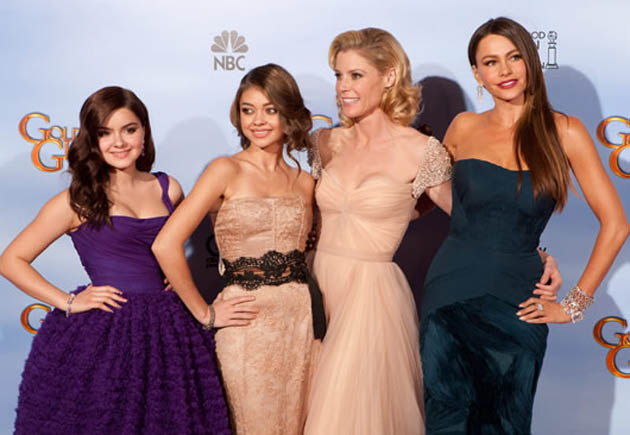 Produced by 20th Century Fox Television, Modern Family was chosen as the Best Television Series – Comedy or Musical at the 2012 Golden Globes. Posing for the camera in the above photo are Modern Family cast members Ariel Winter, Sarah Hyland, Julie Bowen, and Sofia Vergara in the press room at the Beverly Hilton. 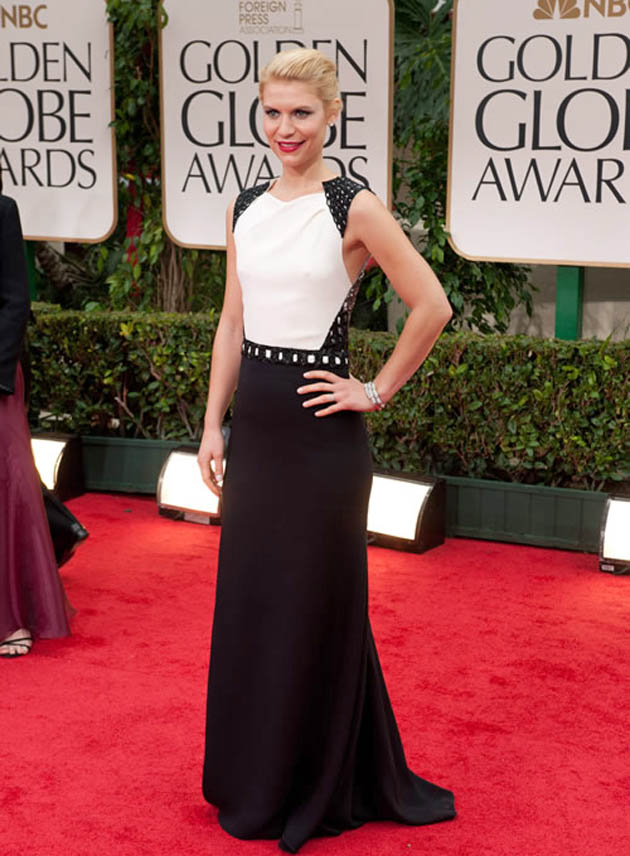 Claire Danes, Golden Globe winner in the Best Actress in a Television Series Drama category for her performance in the Showtime hit Homeland, is pictured above on the Globes’ Red Carpet. Danes’ competition consisted of the following:

Besides this year’s win, Claire Danes has taken home two other Golden Globes: 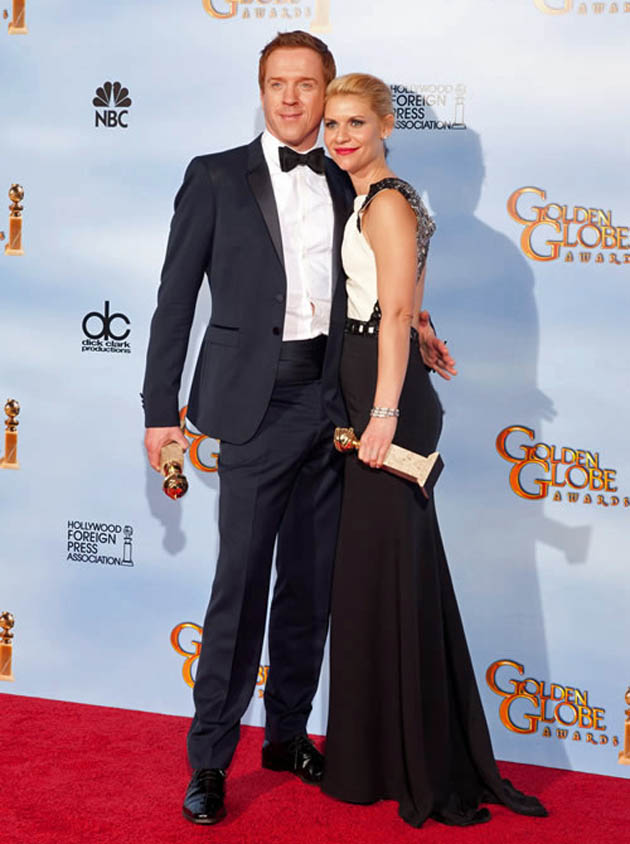 Damian Lewis, for his part, was a nominee for Best Actor in a Television Series Drama. His competition consisted of:

Damian Lewis (born Feb. 11, 1971, in London) has been featured in about a dozen films in the past 15 years. Among them Lawrence Kasdan’s Dreamcatcher (2003); Gareth Lewis’ The Baker (2007); and David Gordon Green’s Your Highness (2011), starring James Franco and Natalie Portman.

Among those presenting Golden Globes at the 2012 ceremony were: 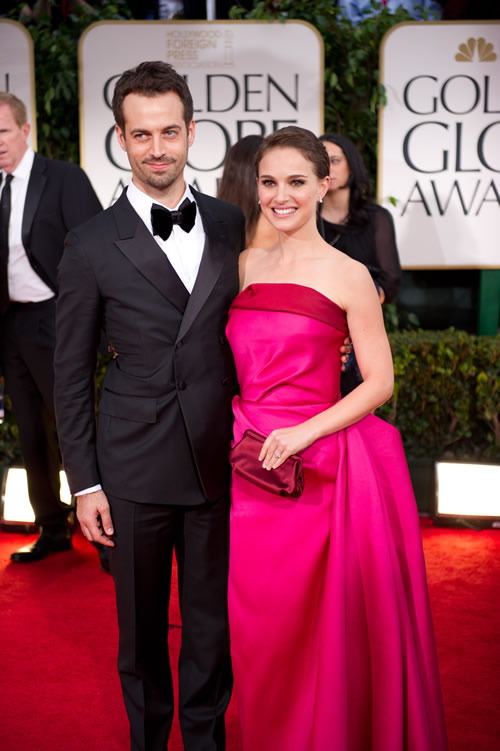 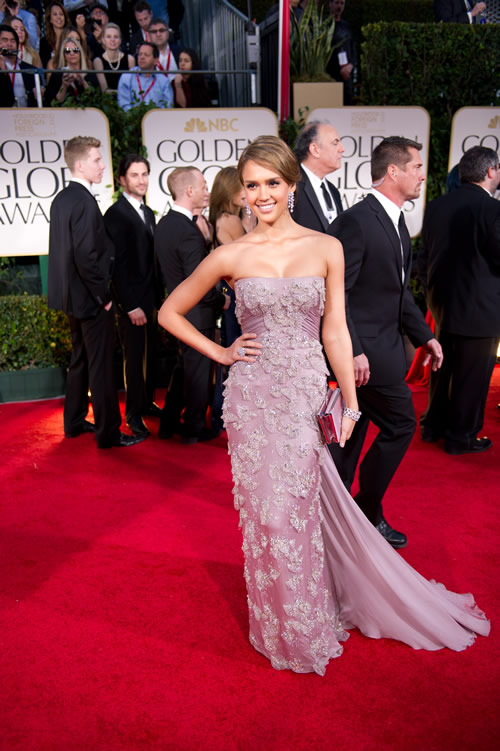 Jessica Alba attends the 69th Annual Golden Globe Awards at the Beverly Hilton in Beverly Hills, CA on Sunday, Jan. 15, 2012. One of the presenters at the 2012 Golden Globes, Alba was also the official blogger of the awards ceremony, as announced on Facebook.

Alba wasn’t nominated for anything this year, but she did receive a Golden Globe nomination in 2005 in the Best Performance by an Actress in a TV Series – Drama for her role in Dark Angel. Among Alba’s latest movies are Spy Kids: All the Time in the World in 4D, Machete, Valentine’s Day, The Killer Inside Me, The Love Guru, and Little Fockers. Additionally, her voice will be heard in the upcoming Escape from Planet Earth. 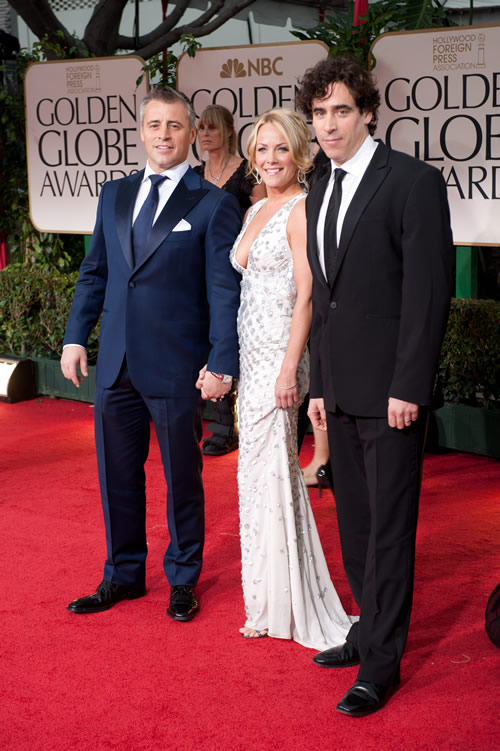 Matt LeBlanc, nominated for Best Actor in a Television Series – Comedy or Musical for his role in Episodes, arrives at the 2012 Golden Globes with Andrea Anders and Stephen Mangan at the Beverly Hilton in Beverly Hills, CA on Sunday, Jan. 15, 2012. LeBlanc was the eventual winner in that category. In his acceptance speech, he thanked the series’ writers for creating a Matt LeBlanc that is much more interesting than the real one.

LeBlanc’s competition in the best sitcom category consisted of Alec Baldwin in 30 Rock, David Duchovny in Californication, Johnny Galecki in The Big Bang Theory, and Thomas Jane in Hung. Inevitably, presenters Jane Lynch and Tina Fey came up with a penis joke during the proceedings.

excellent!
i really adore jessica. so i ask you to send me her email, and i wana takl to her. i’m from asia, so i cant communicate with her face to face. please send me it to my e mail adress. yhank you.

I CAN NOT believe that Damien Lewis didn’t win for best actor! His portrayal of a POW returning home to his family after eight years in captivity…. (and who may or may not have been “turned”….is beyond AMAZING. There aren’t enough words to describe how incredible he is in this profoundly complex roll. It’s a shame he didn’t win. He should have.

It’s really a great injustice that Damian Lewis did not win a Golden Globe!
He is sensational in Homeland and has a huge talent! I no longer trust the Awards!!