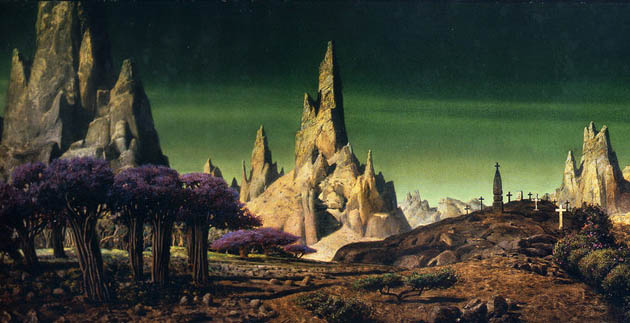 Matte painting tecniques displayed in Forbidden Planet. A Metro-Goldwyn-Mayer release, Fred M. Wilcox’s 1956 science-fiction classic Forbidden Planet was seemingly inspired by William Shakespeare’s The Tempest. Cyril Hume was credited for the screenplay, from a “story” by Irving Block and Allen Adler. In the cast: Walter Pidgeon as a version of Prospero, Anne Francis as his daughter, Leslie Nielsen as the outsider and the young woman’s romantic interest, and Robby the Robot as the Lost in Space plant.
Contents hide
1. ‘The Magic and Mystery of Movie Matte Painting’ to explore cinema’s pre-CGI ‘virtual sets’
2. ‘Playing God: The Art and Artists of Matte Painting’
3. Robert Mitchum interviews available on Roger Ebert website
4. Robert Mitchum vs. Steve Cochran
5. At his best when cast against type
6. Robert Mitchum quotes
7. ‘The Night of the Hunter’: James Agee & Stanley Cortez

This December 2007, the Academy of Motion Picture Arts and Sciences’ Science and Technology Council will be presenting “Fantastic Reality: The Magic and Mystery of Movie Matte Painting,” on Monday, Dec. 10, at 8 p.m. at the Linwood Dunn Theater in Hollywood. Oscar nominee and Academy Visual Effects Branch governor Craig Barron (Batman Returns, 1993) will host the evening.

According to the Academy’s press release, “The Magic and Mystery of Movie Matte Painting”

“will explore the long history of the traditional method of creating ‘virtual sets,’ in which oil paints are brushed and daubed onto a few square feet of glass or wood to be composited later with live action footage. The recent transition into the new frontiers of software and pixels will also be examined.”

‘Playing God: The Art and Artists of Matte Painting’

In conjunction with “The Magic and Mystery of Movie Matte Painting,” the Academy will open the new exhibition “Playing God: The Art and Artists of Matte Painting” in the foyer of the Linwood Dunn Theater.

The exhibition will profile the lives and works of Peter Ellenshaw (20,000 Leagues Under the Sea), Albert Whitlock (The Man Who Would Be King), Matthew Yuricich (Ghostbusters), and others, with displays of their “tools of the trade,” including several of the matte paintings created for such films as Victor Fleming’s The Wizard of Oz (1939), Fred M. Wilcox’s Forbidden Planet (1956), Stanley Kubrick’s Spartacus (1960), and Alfred Hitchcock’s The Birds (1963).

Tickets to “Fantastic Reality” are $5 for the general public and $3 for Academy members and students with a valid ID. “Playing God: The Art and Artists of Matte Painting” is open during Academy events at the Dunn Theater only. Admission is free. The Linwood Dunn Theater is located at 1313 Vine Street in Hollywood. For additional information, visit www.oscars.org or call (310) 247-3600.

Robert Mitchum in The Night of the Hunter. Directed by Best Actor Academy Award winner Charles Laughton (The Private Life of Henry VIII, 1932–1933), the dark thriller The Night of the Hunter stars Robert Mitchum as a psychopathic murderer who finds his way into the home of unsuspecting small-town widow Shelley Winters and her two children (Billy Chapin, Sally Jane Bruce). As the demented love/hate Christian preacher (look at his knuckles), Mitchum was perfectly miscast; i.e., physically, he’s ideal for the part, yet his performance is so unsubtle that, no matter how dastardly his deeds, it’s impossible to take him seriously.[1]

U.S. film critic Roger Ebert affirms that Robert Mitchum, best remembered for a series of films noirs and thrillers from the 1940s and 1950s, was both his favorite movie star and favorite interview subject.

“He would tell you anything,” Ebert explains. “He fearlessly maligned his directors, co-stars, even actors he had never worked with. ([Steve] McQueen? ‘He doesn’t bring much to the party.’) He was once called ‘the embodiment of film noir,’ and that was about right.”

On his website’s “From the Archives” segment, Ebert has posted four of the interviews he conducted with Mitchum, three of held around the time he was starring in David Lean’s Ryan’s Daughter (1970), and the fourth a tribute that came out about two decades later.

“You get a sense of his irreverence,” Ebert notes, “his refusal to take himself seriously, and also, beneath the surface, a constant intelligence. Nobody can be that funny and not know what he is doing.”

Unlike most Old Hollywood fans, in this movie watcher’s view Robert Mitchum is hardly at his most memorable as a film noir antihero.

Jacques Tourneur’s mind-boggling Out of the Past is an intriguing entry in the genre, but mostly because of femme fatale Jane Greer. Angel Face is all about Jean Simmons, while Crossfire is chiefly a Robert Ryan showcase. When it comes to The Locket and The Racket, Laraine Day and Lizabeth Scott are, respectively, the performers that comes to mind.

Heresy, perhaps, but I believe that Steve Cochran (White Heat, Il Grido) would have been much more effective in any of Mitchum’s noir roles. Cochran was more handsome, more brooding, more sensual, more menacing, and, at least on screen, a more convincing ladies’ man.

Besides, the sameness of Mitchum’s somnolent approach to acting is detrimental to many of his movies.

At his best when cast against type

There are, however, a few glaring exceptions – invariably when film noir’s cynical, tough guy was cast against type.

Poor accent or no, he is quite good as an affable and somewhat “weak” sheepman in Fred Zinnemann’s Australian outback-set The Sundowners (1960), in which he is paired with the even more eminently watchable Deborah Kerr, also cast against type as his wife and fellow hick.

Mitchum is also memorable in another non-virile role: the schoolmaster and cuckolded husband in Ryan’s Daughter. This may well be his finest performance, even though David Lean’s uneven, Irish-set romantic/political drama actually belongs to eventual Best Actress Oscar nominee Sarah Miles as the schoolmaster’s adulterous wife.

As for his interviews, Robert Mitchum could indeed sound unabashedly caustic when discussing other people he knew and/or had worked with. Entertaining reading (or watching) for some, perhaps, but a number of his harsher, crueler remarks place him in a less flattering light than the people he is putting down.

“But I don’t give a damn, I must be good at my job; they wouldn’t haul me around the world at these prices if I weren’t. I remember one picture – [The] Wonderful Country [1959], I think it was – where the character comes across the border from Mexico. Parrish was the director and he wanted me to gradually lose my Mexican accent and then pick it up again when I went back to Mexico.

“Parrish is essentially a cutter, not a director. There are several of those. Wise, for example, couldn’t find his way out of a field without a choreographer. Bobby even times a kiss with a stopwatch. He marks out the floor at seven o’clock in the morning, before anybody gets there. Lays it all out with a tape measure. True. It’s very difficult to work that way. I worked with him and Shirley MacLaine [on Two for the Seesaw, 1962] and Shirley said, ‘Why doesn’t he go home? He’s just in the way…’ ”

In this same 1969 interview, you get the full Robert Mitchum quote regarding Steve McQueen:

“I never saw [Robert Wise’s 1966 Best Picture Oscar nominee] The Sand Pebbles. Of course that was a problem picture out in front, with [Best Actor Oscar nominee] Steve McQueen in it. You’ve got to realize a Steve McQueen performance just naturally lends itself to monotony. Steve doesn’t bring too much to the party.”

‘The Night of the Hunter’: James Agee & Stanley Cortez

Besides Robert Mitchum and Shelley Winters, The Night of the Hunter‘s other notable cast member is silent era veteran Lillian Gish (The Birth of a Nation, Broken Blossoms, The Scarlet Letter), in what is probably her most effective talkie role.

The thriller was beautifully shot by two-time Oscar-nominated cinematographer Stanley Cortez (The Magnificent Ambersons, 1942; Since You Went Away, with Lee Garmes, 1944), brother of silent era/Pre-Code leading man Ricardo Cortez.

Unfortunately, The Night of the Hunter turned out to be Laughton’s sole directorial foray.

Robert Mitchum The Night of the Hunter image: United Artists.

Do you know where I can purchase the top one?

Robert Mitchum carried with him, a strong but “quite” independence, depth, intelligence and mystery, in touch with himself…..Never Trying ……………” just being .” Always eluding to a savvy view of the world around him, and those “so-called” uncooperative answers when interviewed, was his effective way of “not” being exploited as an actor or as a person. Hollywood is made up of 99% backside kissers and self glorification, on and off the screen. Mitchum was neither.

Robert Mitchum had great talent but his genius was in his powerful sense of who he was, never telling people who he is, Robert Mitchum lived who he was…. and he did it better than most anyone. He really owned himself and that is something most find an elusive goal in themselves.

A quintessential, one of a kind original.

Robert Mitchum is a most under rated actor. He always had my full attention ever since I first saw him on screen - I was about 8 years old. He has never lost his allure.

Mitchum wasn’t on my radar for about two decades. Recently I went through a noir phase and really came to like him in these movies. Especially in Out of the Past. I appreciate his thoughts on Robert Wise.

I also used to dislike Bogart (whom I thought had no range) but his noir movies persuaded me he was a strong presence in his movies. People rise to stardom for all sorts of reasons, only one of which is acting talent.

My selection for an actor with no range would require you to view any Bette Davis movie. She seems to have only mastered ‘sullen’ and ‘contemptible.’

A clarification: I’m not “anti-Mitchum” and have no desire to be perceived as a “maverick.”

I do like Steve Cochran, and I think he was an underrated and underused actor. Michelangelo Antonioni got some good stuff out of him in “Il Grido.” I’d recommend a look at that one to those who find Cochran a predictable performer.

Regarding your statement regarding Robert Mitchum,
How can you justify saying that Steve Cochrane is better, sexier than Robert Mitchum? Although I like Steve Cochrane as a secondary player he’s pretty thin as a personality or perhaps see through is a better word and if you pardon me kind of a dummy. In that I mean, for example, Jane Greer in Out of The Past would of taken him for a ride and plugged him by the end of the first reel. An actor a little too in love with himself, for example in Best Years of Our Lives. Good a being a creep and too aware of his looks. Mitchum on the other hand had the attitude, real or not, of ” So what, so I look good, are we done?” Also Mitchum could move “B” material up to an “A” just by showing up and not tripping over the furniture. Either you’re trying to be anti Mitchum in order to show what a maverick you are or you just don’t have any sense. To me the reason Mitchum excelled in his acting, whether in noir films or almost any other type of film he took on, was his ability to play it low key and be natural but he also had something going on inside. Intelligence, depth, maybe just plain old experience with the real world, something many actors of the past and especially of todays movies, have very very little of. Also if you can deny Mitchums sex appeal then this may just be your own personal taste or problem. How about Steve Cochrane in Night of the Hunter think he could have pulled one that off too? Oh and referring to Mitchums attitude or style being described as somnambulistic is pretty tired as of the 1950’s.