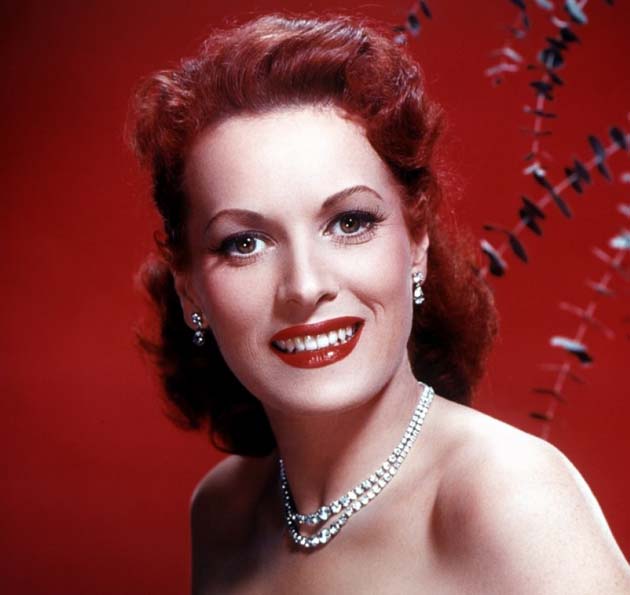 Veteran actress and Honorary Oscar recipient Maureen O’Hara, who died at age 95 on Oct. 24 in Boise, Idaho, will be remembered by Turner Classic Movies with a 24-hour film tribute on Friday, Nov. 20.

At one point known as “The Queen of Technicolor” – alongside “Eastern” star Maria Montez – the red-headed O’Hara (born Maureen FitzSimons on Aug. 17, 1920, in Ranelagh, County Dublin) was featured in more than 50 movies from 1938 to 1971 – in addition to one brief 1991 comeback (Chris Columbus’ Only the Lonely).

Setting any hint of modesty aside, Maureen O’Hara wrote in her 2004 autobiography (with John Nicoletti), ‘Tis Herself, that “I was the only leading lady big enough and tough enough for John Wayne.”

Wayne, for his part, once said (as quoted in ‘Tis Herself):

There’s only one woman who has been my friend over the years and by that I mean a real friend, like a man would be. That woman is Maureen O’Hara. She’s big, lusty, and absolutely marvelous – definitely my kind of woman. She’s a great guy. I’ve had many friends and I prefer the company of men. Except for Maureen O’Hara.

O’Hara found this remark the greatest compliment she ever received from her Rio Grande and The Quiet Man co-star.

Now, in all fairness Wayne shared the screen with several other tough, no-nonsense actresses during his nearly five-decade movie career. Jean Arthur, Claudette Colbert, and Claire Trevor, to name three, not only kept him in his place, but made the jumbo-sized actor look so tiny as to be all but invisible in, respectively, A Lady Takes a Chance, Without Reservations, and Stagecoach.

And of course, one can only wonder whether Wayne would have been equally flattered had O’Hara said, “There’s only one man who has been my friend over the years and by that I mean a real friend, like a woman would be. That man is John Wayne. … He’s a great gal. I’ve had many friends and I prefer the company of women. Except for John Wayne.”

Either way, the Maureen O’Hara and John Wayne duo remains one of the best known in film history – despite the fact that they were featured together in only five movies: John Ford’s Rio Grande (1950), The Quiet Man (1952), and The Wings of Eagles (1957), plus Andrew V. McLaglen’s McLintock! (1963) and George Sherman’s Big Jake (1971), in which O’Hara has what amounts to a cameo.

One key reason for the lasting fame of the O’Hara-Wayne pairings is probably the fact that John Ford is one of the few well-remembered auteurs of Old Hollywood; one chiefly associated with the male-oriented Western genre – always a plus as far as most film historians are concerned. Although neither The Quiet Man nor The Wings of Eagles is a Western, both are Ford movies featuring Big & Strong macho characters.

TCM will be airing those two, in addition to both McLintock! and Big Jake. I’ve yet to check out McLintock!, a Westernized version of Shakespeare’s The Taming of the Shrew, but of the four other Maureen O’Hara-John Wayne movies, The Quiet Man is by far the best. 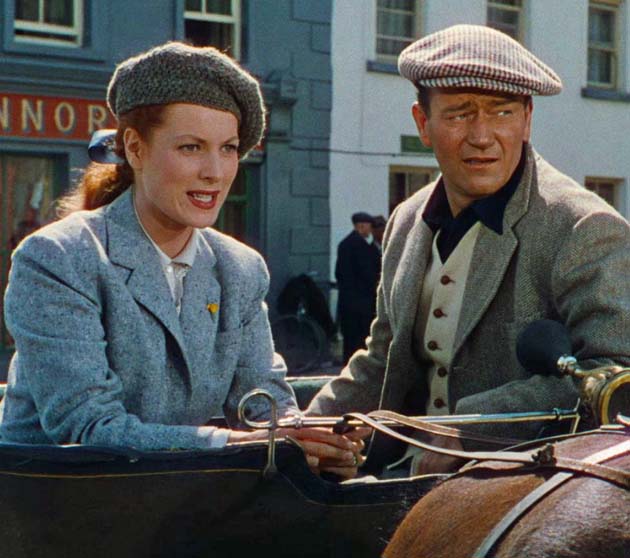 Maureen O’Hara in ‘The Quiet Man’ with John Wayne.

Adapted by frequent John Ford collaborator Frank S. Nugent (Three Godfathers, The Searchers) from a story by Maurice Walsh, The Quiet Man follows an American former boxer (John Wayne) who returns to the Irish village of his birth, where he decides to marry the local fiery, red-headed beauty (Maureen O’Hara). But first, the ex-boxer must prove his manhood by coming to blows with the woman’s big, boisterous brother (Victor McLaglen, ravenously chewing on the Irish scenery).

Some find The Quiet Man one of the greatest Hollywood movies of the ’50s. I wouldn’t go that far – not even close, what with its celebration of violence and (eventual) taming of its strong-willed heroine by a man who just happens to be bigger than she is.

Yet the film is undeniably gorgeous (courtesy of Oscar-winning cinematographers Winton C. Hoch and Archie Stout) and it features what may well be the most memorable characterization of Maureen O’Hara’s career: the tough but vulnerable and slyly humorous Mary Kate Danaher. (“I have a fearful temper,” Mary Kate warns Wayne’s boxer. “You might as well know about it now instead of findin’ out about it later.”) It’s lamentable that O’Hara wasn’t shortlisted for that year’s Best Actress Oscar.[1]

The Quiet Man did, however, earn John Ford his record-breaking fourth (and last) Best Director Academy Award,[2] being also notable as the first and only Republic Pictures production to have been nominated for Best Picture. It ultimately lost to Cecil B. DeMille’s all-star color extravaganza The Greatest Show on Earth.

The Quiet Man, I should add, was O’Hara’s own personal favorite among her films, which include Ford’s Best Picture Oscar winner How Green Was My Valley (1941), Jean Renoir’s World War II drama This Land Is Mine (1943), Walter Lang’s romantic melo Sentimental Journey (1946), George Seaton’s Christmas perennial Miracle on 34th Street (1947), and Carol Reed’s crime/spy comedy-drama Our Man in Havana (1960).

As for the turkey The Wings of Eagles, it must be one of the worst movies in John Ford’s career. O’Hara is wasted in a subordinate role as the wife of pioneering aviator-turned-writer Frank “Spig” Wead (John Wayne). Former Betty Grable leading man Dan Dailey co-stars.

Queen of Technicolor shines in black and white

Despite the Queen of Technicolor label, Maureen O’Hara was equally resplendent in black and white. TCM will be presenting (unfortunately only) two of her most prestigious monochrome efforts on Nov. 20: 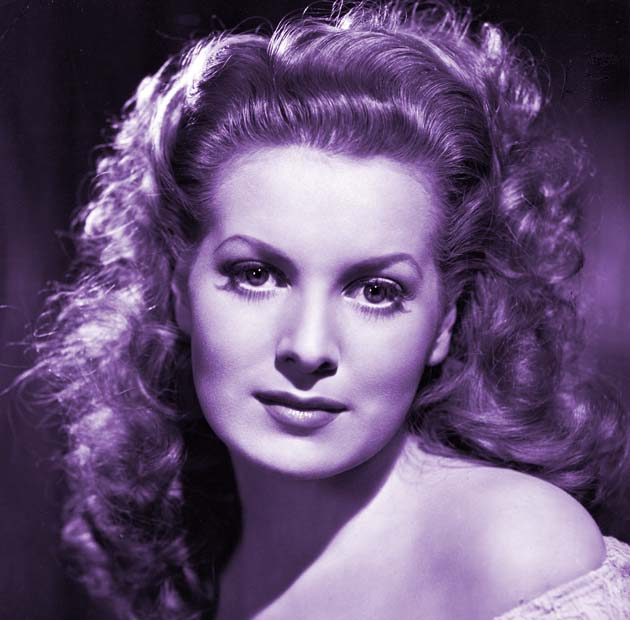 Also worth a look is Delmer Daves’ The Battle of the Villa Fiorita (1965), an unusually old-fashioned romantic drama for the time. Based on a Rumer Godden novel, the film stars Maureen O’Hara as a British woman who leaves her husband to attempt a new life with Italian musician Rossano Brazzi.

Beautiful to look at (courtesy of cinematographer Oswald Morris), the mistitled The Battle of the Villa Fiorita features a series of soap-operaish skirmishes pitting the middle-aged lovers against their obnoxious children, who don’t like the idea of being presented with new parents.

The melodrama is made tolerable thanks to its two personable stars, Mischa Spoliansky’s excellent score, and the superior supporting performances by veterans Richard Todd and Phyllis Calvert, who steal the show from the two leads.

And finally, the Queen of Technicolor looks radiant opposite Paul Henreid in Frank Borzage’s The Spanish Main (1945) and opposite Douglas Fairbanks Jr. in Richard Wallace’s Sinbad the Sailor (1947). Yet these glossy color adventures are only for big-time Maureen O’Hara fans – in that vein, Henry King’s The Black Swan (1942), starring O’Hara and Tyrone Power, is far superior (but it’s not on the schedule). Having said that, The Spanish Main offers an enjoyably feisty Binnie Barnes as the real-life-inspired, sword-fighting pirate Anne Bonney (also spelled as Anne Bonny).

Below is the full list of movies to be shown during TCM’s Maureen O’Hara movie marathon.

[1] For the record, the 1952 Best Actress Academy Award nominees were:

Except perhaps for Julie Harris’ tomboy in the Fred Zinnemann-directed drama, I find Maureen O’Hara’s performance in The Quiet Man far more effective than those of that year’s Oscar-nominated lead actresses.

Only How Green Was My Valley also took home the year’s Best Picture Oscar. The Informer lost to Frank Lloyd’s Mutiny on the Bounty; The Grapes of Wrath lost to Alfred Hitchcock’s Rebecca.

Image of John Wayne and Maureen O’Hara in The Quiet Man: Republic Pictures, via the Center for Creative Media website.

THE WINGS OF EAGLES is an American Eagle; not a turkey. A tragic true story with outstanding, full-bodied performances from both THE DUKE & HIS FAVORITE LEADING LADY!