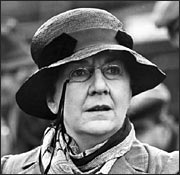 Maureen Stapleton, whose career in film, on stage, and on television spanned more than five decades, died of chronic pulmonary disease on March 13 at her home in Lenox, Mass. She was 80.

Born Lois Maureen Stapleton in Troy, N.Y., on June 21, 1925, she was educated at Troy High School. Her childhood was beset with family problems that eventually led her alcoholic father to leave home when Maureen was five.

Movie houses, where everybody on screen “was beautiful, rich and happy,” were her escape from her home life. In 1965, she explained her choice of profession: “I thought if you got to be an actress, you automatically ended up looking like that – thin and beautiful.”

At the age of 18 she moved to New York City, where she studied at Herbert Berghof’s acting school and at the Actors’ Studio. During her struggling years, she made ends meet by working as a waitress and as a nude artists’ model.

One of the few performers to win top acting awards for stage, film, and television work, Stapleton made a career out of playing matronly, unglamorous parts. She won her first Tony for her tour de force as the overripe Serafina delle Rose in the 1951 production of Tennessee Williams’ The Rose Tattoo. (Williams had written the role with Anna Magnani in mind, but feeling that her English was too poor Magnani balked at appearing on Broadway. Despite her still tentative English, she did star in the 1955 film version, for which she won an Oscar.)

Later on, Stapleton starred in Williams’ Orpheus Descending (as Lady Torrance), opposite Janice Rule and Cliff Robertson, and in The Glass Menagerie (as Amanda Wingfield).

She also appeared in the 1960 film version of Orpheus Descending, The Fugitive Kind, directed by Sidney Lumet, and starring Magnani, Marlon Brando, and Joanne Woodward. Magnani took over the role of Lady Torrance, while Stapleton was given a supporting part. The film was not a success.

Also onstage, Stapleton was widely praised for playing three roles in the Neil Simon comedy Plaza Suite. (In the 1971 film version, directed by Arthur Hiller, and starring Walter Matthau, Stapleton plays only one character; the other two key female parts were given to Barbara Harris and Lee Grant.)

Another Simon play, the 1970 comedy The Gingerbread Lady, brought her her second Tony. And in 1981, she scored another Broadway success as the distraught Birdie in a revival of Lillian Hellman’s The Little Foxes, starring Elizabeth Taylor.

On the big screen, Stapleton’s impact was more limited. She was never a motion picture star, appearing only sporadically in supporting roles. Nevertheless, she did receive an Academy Award in addition to three other nominations.

The first of those was for her film debut in the 1958 melodrama Lonelyhearts, which former MGM honcho Dore Schary adapted (from a play and novel) for the screen. With director Vincent J. Donehue having eyes only for star Montgomery Clift, Stapleton developed a good rapport with her very ladylike co-star Dolores Hart (now Mother Dolores). “One always trying to shock,” recalls author and Hart’s friend Richard DeNeut, “the other giving the impression she wasn’t shocked.”

Twelve years later, Stapleton received her second Oscar nomination for her performance as a distraught woman whose demented husband (Van Heflin) is about to blow up a plane in George Seaton’s highly successful Airport. (She lost the award to stage and screen veteran Helen Hayes, who plays a stowaway in the same film.) In 1978, Stapleton’s outstanding turn as a no-nonsense other woman in Woody Allen’s Bergmanesque Interiors brought her a third Oscar nod. For that role, she also won best supporting actress honors from the New York Film Critics Circle.

She finally won the coveted statuette – plus awards from the British Film Academy, the Los Angeles Film Critics Association, and the National Society of Film Critics – for playing the anarchist/feminist writer Emma Goldman in Warren Beatty’s 1981 politics & romance epic Reds. Upon winning, Stapleton thanked “my inspiration, Joel McCrea,” and later told the press, “I hope this is only the beginning. Next I want to win as Best Actress, then Best Supporting actor, Best Actor, all of it.”

Also in 1981, she did a hilarious turn in the little-seen thriller The Fan, as musical star Lauren Bacall’s take-no-prisoners secretary. Her best known film role, however, is probably as one of the senior citizens – Jessica Tandy, Hume Cronyn, and Don Ameche among them – who find themselves young again, at least in spirit, in Ron Howard’s 1985 comedy-fantasy Cocoon.

In later years, Stapleton could be seen in Griffin Dunne’s 1997 romantic comedy Addicted to Love, starring Meg Ryan and Matthew Broderick. Her last film role was in Doug Stone’s 2003 dramatic comedy Living and Dining, which, as per the IMDb, has thus far only been screened at the Ashland International Film Festival.

Stapleton’s Emmy win came for the 1967 teleplay Among the Paths to Eden, based on a Truman Capote story about a lonely New Yorker who hopes to find Mr. Right at the local cemeteries. She received six other Emmy nominations, including one for the popular 1975 TV movie Queen of the Stardust Ballroom, in which she plays a recent widow who finds love – in the person of Charles Durning – one last time.

An autobiography, Hell of a Life, came out in 1995. In the book she revealed that while preparing for Reds she tried to read Emma Goldman’s memoirs, but gave up on the book because she found it too boring. “There are many roads to good acting,” she explained. “I’ve been asked repeatedly what the ‘key’ to acting is, and as far as I’m concerned, the main thing is to keep the audience awake.”

Stapleton was equally frank about her years of alcoholism and her many phobias, including the fear of flying, elevators, trains, and heights. She was also paranoid about being shot during one of her theatrical performances, though she managed to conquer that phobia by constantly moving about on stage.

Her marriage to Broadway stage manager Max Allentuck, with whom she had two children, ended in divorce in 1959. That was followed by a 1963 marriage to screenwriter David Rayfiel – best known for his work on Three Days of the Condor and Havana. That second union was dissolved in 1966.

Additionally, the actress was involved with playwright George Abbott, one of the creators of On Your Toes and The Boys from Syracuse, who was almost twice her age. Their ten-year relationship ended when he left her for a younger woman.

Never known for being a glamorous Broadway or Hollywood star – though well known for having a sharp (and quite risqué) tongue – Stapleton once remarked, “People looked at me on stage and said, ‘Jesus, that broad better be able to act.”

The Loss of a Teardrop Diamond: Q&A with Director Jodie Markell