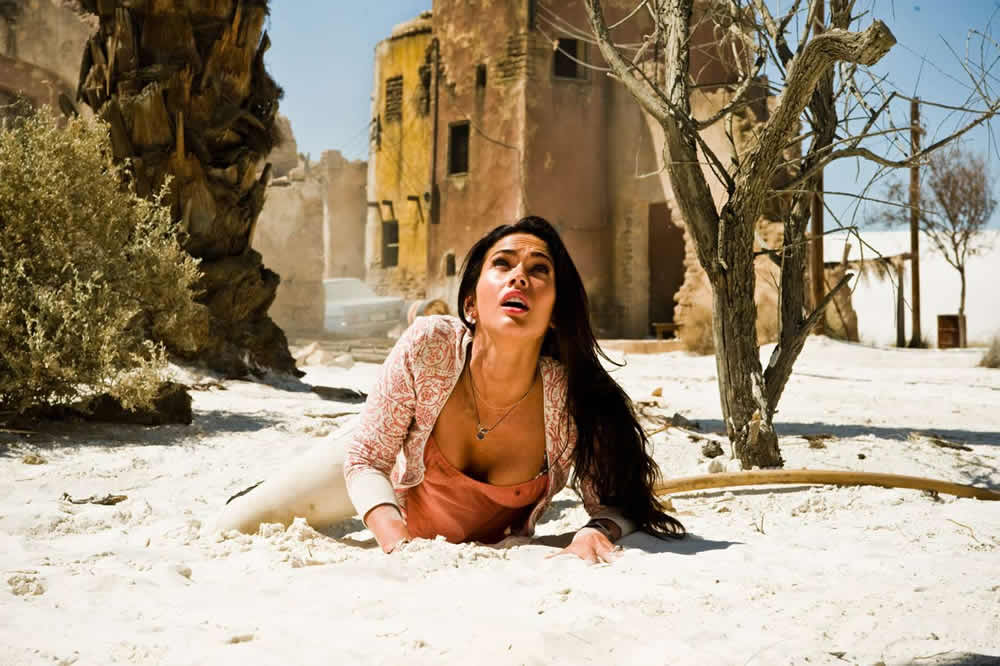 Megan Fox as Mikaela Banes in Michael Bay’s Transformers: Revenge of the Fallen

Well, in case he himself is to be believed, Michael Bay does take orders from at least one person: Steven Spielberg, one of the executive producers of the Transformers franchise. And according to Bay, it was the Hitler comparison that did Megan Fox in.

Megan Fox was summarily fired and Victoria’s Secret model Rosie Huntington-Whiteley was brought in to replace her as Shia LaBeouf’s love interest in Transformers: Dark of the Moon, which opens June 29. Fox and her reps said at the time that it had been Fox’s decision to leave the Transformers franchise.

Megan Fox’s Hitler comment was made to Wonderland Magazine in 2009:

[Michael Bay is] like Napoleon and he wants to create this insane, infamous mad-man reputation. He wants to be like Hitler on his sets, and he is. So he’s a nightmare to work for but when you get him away from set, and he’s not in director mode, I kind of really enjoy his personality because he’s so awkward, so hopelessly awkward. He has no social skills at all. And it’s endearing to watch him.

Bay, for his part, told GQ:

I wasn’t hurt, because I know that’s just Megan. Megan loves to get a response. And she does it in kind of the wrong way. I’m sorry, Megan. I’m sorry I made you work twelve hours. I’m sorry that I’m making you show up on time. Movies are not always warm and fuzzy.

Regarding the Megan Fox vs. Michael Bay Transformers 3 controversy (which now also involves Steven Spielberg), below is what Shia LaBeouf had to say about the matter to the Los Angeles Times a while back. LaBeouf’s version of the story doesn’t exactly matches what Bay told GQ – the director all but said he was merely obeying orders from Steven Spielberg when he fired Megan Fox from Transformers 3, a.k.a. Transformers: Dark of the Moon.

LaBeouf, I should add, probably isn’t concerned about getting fired by Bay, Spielberg, or anyone else, as he says he’s done with the Transformers franchise. But then again, he probably would like to work with Spielberg one more time, as a new Indiana Jones movie seems to be in the works.

Megan developed this Spice Girl strength, this woman-empowerment [stuff] that made her feel awkward about her involvement with Michael, who some people think is a very lascivious filmmaker, the way he films women. Mike films women in a way that appeals to a 16-year-old sexuality. It’s summer. It’s Michael’s style. And I think [Fox] never got comfortable with it. This is a girl who was taken from complete obscurity and placed in a sex-driven role in front of the whole world and told she was the sexiest woman in America. And she had a hard time accepting it. When Mike would ask her to do specific things, there was no time for fluffy talk. We’re on the run. And the one thing Mike lacks is tact. There’s no time for [LaBeouf assumes a gentle voice] ‘I would like you to just arch your back 70 degrees.'”

“I love Megan and I miss the girl,” Shia LaBeouf tells USA Today‘s Anthony Breznican. “But Sam and Mikaela became one character, and here … you have discovery again from a new perspective.”

“Sam” is Sam Witwicky – did Groucho Marx think that one up? – “Mikaela” is Mikaela Banes, Megan Fox’s bosomy, ultra-tanned character. The “discovery” is Rosie Huntington-Whiteley.

Either Fox was let go by Paramount or she let go of Paramount / Michael Bay / Transformers 3, depending on whose story you choose to believe. Huntington-Whiteley, a Victoria’s Secret model with no acting experience, was chosen as Fox’s replacement. Fox, for her part, will next be seen in Jonah Hex, which opens June 18. Josh Brolin and John Malkovich co-star.

According to the USA Today piece, the Transformers 3 plot remains a top-secret affair, “but it delves into the space race between the U.S.S.R. and the USA, suggesting there was a hidden Transformers role in it all that remains one of the planet’s most dangerous secrets.” 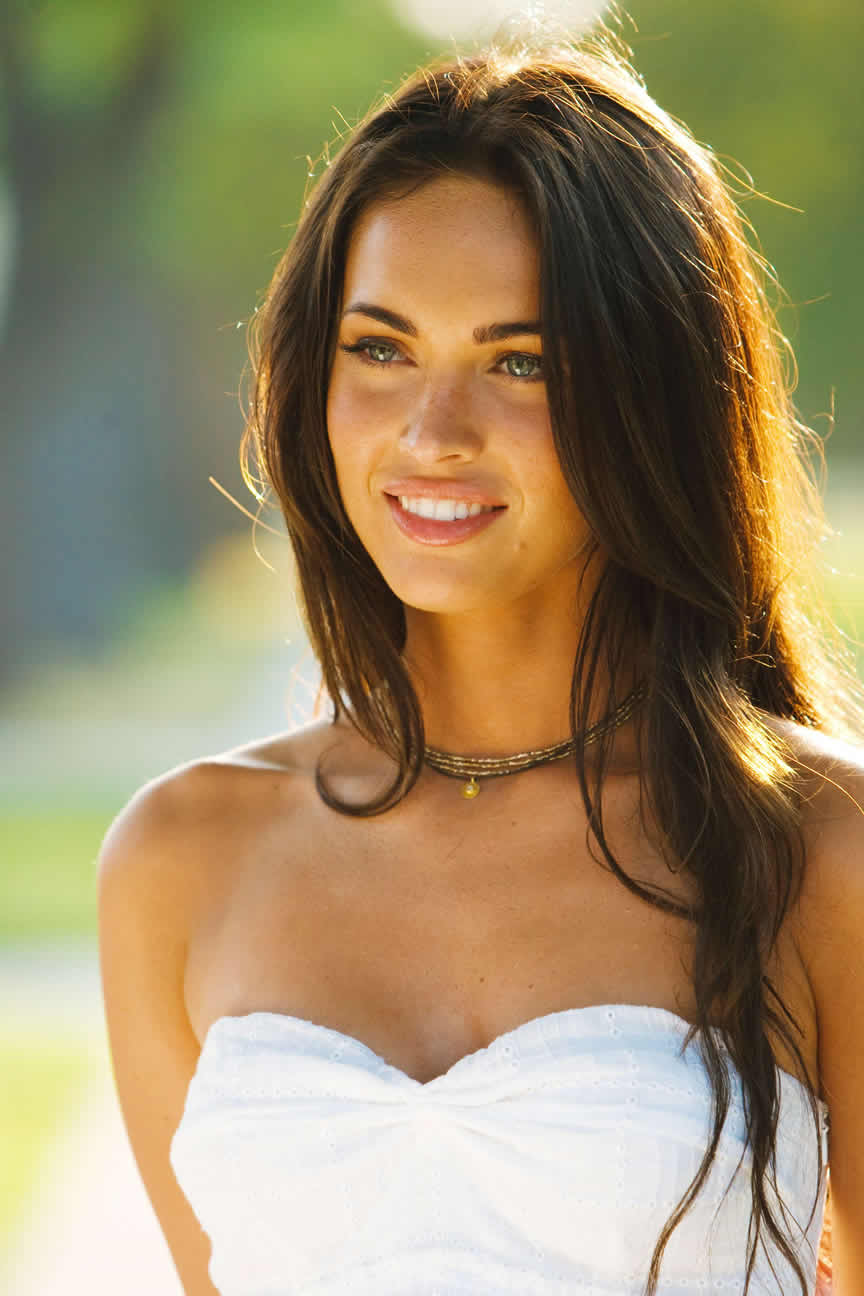 Megan Fox, who apparently will be replaced by British model Rosie Huntington-Whiteley as Shia LaBeouf’s love interest in Transformers 3, had a falling out with Michael Bay because she looked too “pale” and “underweight” for the director, Jeff Sneider reports in TheWrap.

Stories about Fox’s skin color and weight being a contentious issue had already been circulating online. And as it has been reported before, Fox and others associated with the Transformers 3 production assert that she was the one who walked off the set after Bay expressed his unhappiness with her looks. And that’s when Paramount decided not to renew Fox’s contract.

According to Sneider, “while it’s technically true that Paramount declined to pick up Fox’s option, it was because the actress had already decided to walk away.” Sneider adds that Fox’s character, Mikaela Banes, was “reportedly” found in Ehren Kruger’s screenplay as recently as May 17, when production began on Transformers 3.

Rosie Huntington-Whiteley, 23, has no acting experience. Not that much will be needed. 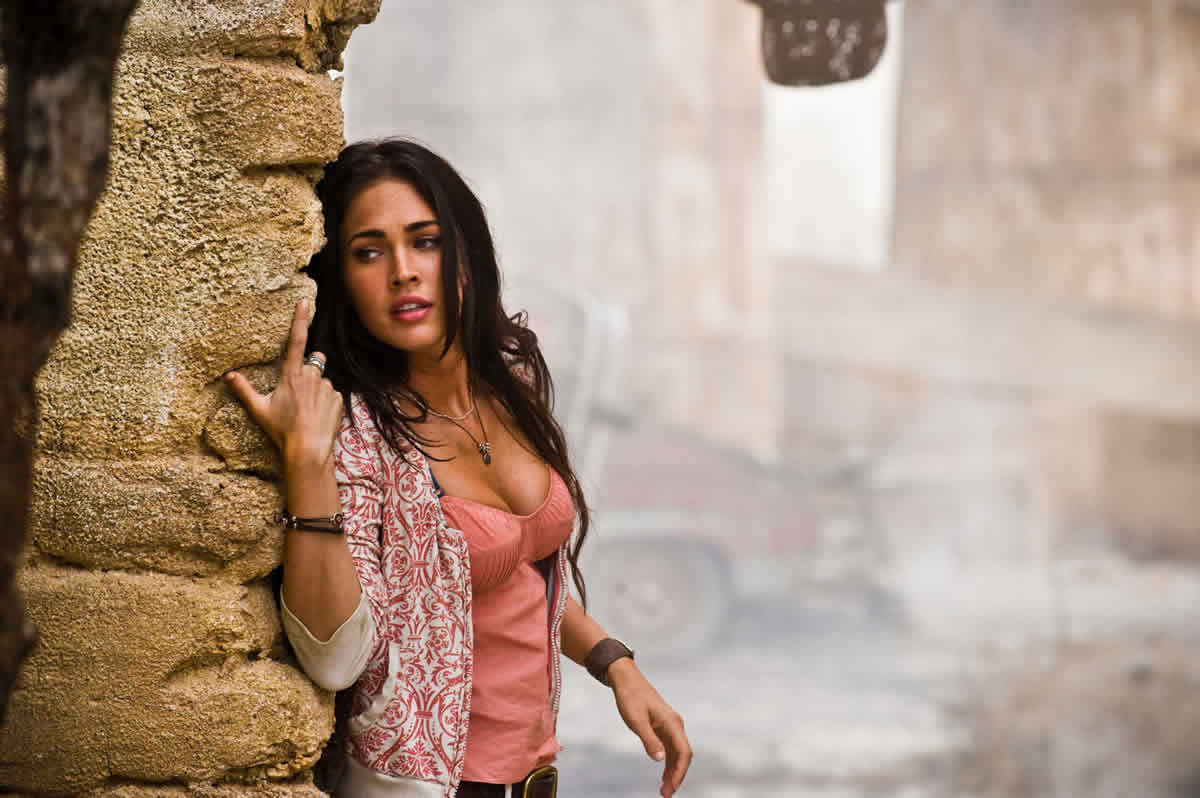 Did Paramount dump Megan Fox or did Megan Fox dump Transformers 3, Michael Bay, and Paramount? It’s kind of like a lovers’ quarrel.

At Deadline.com, Nikki Finke broke the Paramount vs. Megan Fox story, asserting that Fox was dumped by the studio. Both Transformers and Transformers: Revenge of the Fallen were huge hits, immune to across-the-board critical pans for their sheer idiocy. Why wouldn’t Megan Fox want to star in Transformers 3?

Now, comes Jeff Sneider in TheWrap, stating that Fox may indeed have been the one to get the hell out of Transformers 3 because director Michael Bay was “verbally abusive” toward her. The source for this version of the story is “an individual close to the actress.”

Last week, however, the studio insisted: “Paramount had the unilateral right to exercise an option for Megan Fox to appear in Transformers 3. Paramount at its sole election allowed the option to lapse.”

As per Sneider’s piece, Fox’s publicist would only repeat a statement released to People.com last week, explaining that the actress “left the project on her own and wishes the franchise well.”

Fox, who has compared Bay to both Hitler and Napoleon, recently said she was afraid she might get skin cancer because of Bay’s insistence on her looking tanned in his films.

“Given that the story broke Wednesday on Deadline,” Sneider adds, “it’s highly plausible that Paramount studio chairman Brad Grey’s well-known relationship with editor-in-chief Nikki Finke played a part in how the story was initially spun.”

(That TheWrap and Deadline.com would have divergent stories about the same subject is nothing new. What’s weird is: Why would Paramount go out of its way to make Megan Fox look bad? The studio could just as easily have said that contractual negotiations fell through and that was that.)

In his piece, Sneider also says that “an individual close to [another] actress,” Kate Beckinsale, said that Michael Bay “wasn’t very nice” to her on the set of the expensive flop Pearl Harbor. And that Isabel Lucas declined to join her Transformers: Revenge of the Fallen co-stars on a publicity tour for the film because of she didn’t want to be around Bay. (Though Lucas did at least to go to the Transformers 2 Tokyo premiere.)

Gemma Arterton, recently seen in Clash of the Titans, has been rumored to be Megan Fox’s replacement in Transformers 3. Now, will Arterton be around to do that film’s promotional tour?

Instead of Lutz and Greene, Megan Fox, 24, turned out to be the one dumped from a popular movie franchise. That’s Transformers, directed by Michael Bay and distributed by Paramount. According to reports, Fox had had a falling out with director Bay – actually, more than one, comparing Bay to Hitler at one point and recently blaming the director for her overly tanned skin color.

But then again, it may not have been Paramount that booted Fox, but Fox who booted Paramount and Transformers. Representatives for the actress have told People that “it was her decision not to return. She wishes the franchise the best.” At Deadline.com, Nikki Finke affirms that Paramount booted Fox at Bay’s insistence.

In October 2009, Michael Bay announced on his blog that Transformers 3 would indeed get made, adding:

“P.S. Megan Fox, welcome back. I promise no alien robots will harm you in any way during the production of this motion picture. Please consult your Physician when working under my direction because some side effects can occur, such as mild dizziness, intense nausea, suicidal tendencies, depression, minor chest hair growth, random internal hemorrhaging and inability to sleep. As some directors may be hazardous to your health, please consult your Doctor to determine if this is right for you.”

Both Transformers and Transformers: Revenge of the Fallen are considered by many to be two of the worst movies ever made. But who cares? Paramount certainly doesn’t. The two movies combined grossed a worldwide total of more than $1.5 billion.

In the Transformers movies, Fox played Shia LaBeouf’s paramour. That means LaBeouf will now have to find himself a new love interest. Not that the people who pay to watch something like Transformers would notice if LaBeouf’s character ended up falling in love with a shape-shifting soda can. That is, as long as there are enough deafening explosions to ensure no one will have the mental capability to think about minor details such as character and plot.

Transformers 3 is scheduled to go into production this month. Its release date has been set for July 1, 2011.

Megan Fox, whose Jennifer’s Body was a major critical and box office flop, will next be seen opposite Josh Brolin and John Malkovich in Jimmy Hayward’s supernatural Western Jonah Hex, to come out on June 18.

Most of the First World suffers from Glass House Syndrome. If people continually get penalized for using the H word as an analogy, I guess illusions of grandeur always has its evil twin - delusions of same. The real H word in recent memory is - hubris. . ..

megan fox is still hot that should still be her part.it would be weird with someone else.but other then that i think the movie will be badass i love the first two.

IA with Billy B… I wouldn’t worry about her career. Transformers blockbuster franchise has run its course

Both films were lousy, particularly the second, and I am bewildered by their box office success, but if the absence of this woman with no visable talent will put an end to this series, then bravo to this decision.

Well she just lost an easy $6 million and change. Jonah Hex is going to flop. Red Sonja is going to flop too if they ever make it. Her 15 minutes are up. She better start calling Lindsey Lohan so she can have a club buddy.

She should have kept her mouth shut. Now she is out of next summer’s biggest, or one of the biggest, blockbusters.

There’s always Dancing with the Stars, Celebrity Fit Club in a few years, and Celebrity Apprentice. I think she and the Donald could have some good blowups. Someone should have told her that it’s not too hard to be replaced when all you do is stand around in skimpy outfits and deliver nauseatingly bad acted lines. There are about a million more that could do the job. Too bad that Ashley Greene already signed on for Breaking Dawn, this role would have been right down her alley and Kellan Lutz could have played one of the army guys.