Alessandro Moretti 12 years ago
Meredith Baxter. Family and Family Ties actress Meredith Baxter (a.k.a. Meredith Baxter Birney) has come out as a lesbian after learning that tabloids were about to out her. The three-time Primetime Emmy nominee has been featured in only a handful of movies, most notably in a couple of 1976 releases: Alan J. Pakula’s Oscar-nominated All the President’s Men, in which she has a small but memorable bit, and David Miller’s Bittersweet Love, a little-seen effort notable because of its theme (incest) and the presence of a quartet of old-timers: Lana Turner (as Baxter’s mother), Celeste Holm, Robert Alda, and Robert Lansing (as Baxter’s biological father).
Contents hide
1. Three-time Primetime Emmy-nominated actress Meredith Baxter comes out as gay
1.1. Beating the tabloids
1.2. Meredith Baxter movies
1.3. Television
1.4. ‘Family’ & ‘Family Ties’
1.5. Third Primetime Emmy nomination
1.6. Mother Whitney Blake & aunt (?) Anne Baxter
1.7. Meredith Baxter husbands & wife

On the day the New York senate decided that gays should not have the right to marry, Meredith Baxter, best known for two television series with the word “family” in the title – Family in the 1970s and Family Ties in the 1980s – stated publicly that she is a lesbian.

The 62-year-old Baxter (born on June 21, 1947, in South Pasadena, Los Angeles County), who has been married three times and has five children, is currently in a relationship with building contractor Nancy Locke. The couple have been together for four years. Baxter says she began dating women seven years ago.

She decided to open up now because supermarket and online tabloids recently got hold of a story about her – accompanied by a female friend – taking part in a lesbian cruise. (As reported in the Chicago Sun-Times, openly gay actress Kelly McGillis – of Reuben Reuben, Top Gun, and The Accused fame – had previously been on that lesbian-geared cruise as well.)

“I didn’t want some tabloid to take the story and make it up,” Baxter said during an interview with Matt Lauer for the Today show. “I wanted it to be in my own words.”

Among Meredith Baxter’s handful of big-screen credits are the following:

More recently, Baxter was featured in Lorraine Senna’s Paradise, Texas (2005), a little-seen indie in which she plays the neglected wife of has-been actor Timothy Bottoms (The Last Picture Show, Texasville).

That same year, she was excellent in a supporting role in George Bamber’s gay-themed comedy The Mostly Unfabulous Social Life of Ethan Green, playing the no-nonsense mother of the titular social misfit (brought to life by Daniel Letterle).

On television, Meredith Baxter – oftentimes billed as Meredith Baxter Birney (sometimes with a hyphen) – has made countless guest appearances in multiple series (The Love Boat, 7th Heaven, Brothers & Sisters), and has starred in a number of television films and miniseries, including:

Notably, Meredith Baxter played a lesbian mother raising a young son in the 1993 CBS Schoolbreak Special episode “Other Mothers,” for which she received a Daytime Emmy Best Actress nomination. 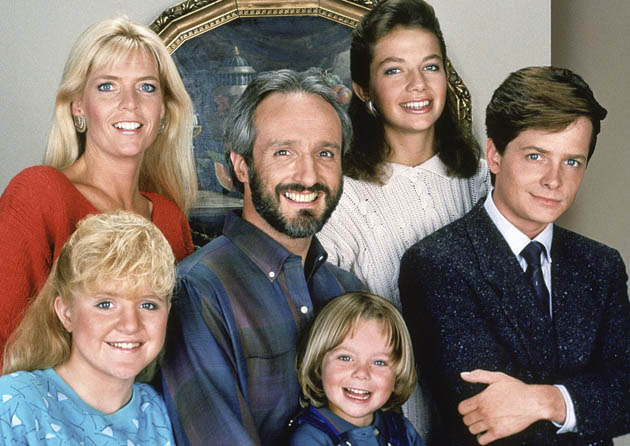 Meredith Baxter in Family Ties family picture with Michael Gross, Michael J. Fox, Justine Bateman, Tina Yothers, and Brian Bonsall. In addition to his three Primetime Emmy wins, at the 1989 Golden Globes ceremony Michael J. Fox shared the award for Best Actor in a Television Series – Comedy or Musical with Judd Hirsch for Dear John and Richard Mulligan for Empty Nest. As for the NBC sitcom itself, Family Ties was shortlisted for three Golden Globes (1985–1987). Meredith Baxter, for her part, was never singled out for either the Golden Globes or the Emmys for her performance as the sitcom’s youthful, liberal-minded wife and mother.

In her other family hit series, Gary David Goldberg’s NBC sitcom Family Ties (1982–1989), Baxter was cast as the liberal-minded Elyse Keaton – the wife of Michael Gross; and the mother of Michael J. Fox, Justine Bateman, Tina Yothers, and Brian Bonsall.

Family Ties was nominated for four Primetime Emmys in the Outstanding Comedy Series category (1984–1987), but the only two cast members to be singled out were Michael J. Fox, nominated a total of five times* (1985–1989), including three wins as Best Actor in a Comedy Series (1986–1988), and two-time Best Supporting Actress in a Comedy Series nominee Justine Bateman (1986, 1987).

* Michael J. Fox’s first nomination, in 1985, had him listed in the Best Supporting Actor in a Comedy Series category.

Meredith Baxter’s third Primetime Emmy nod would come in 1992, for her performance as real-life murderess Betty Broderick in the first part of a two-part TV movie (aired months apart) directed by Dick Lowry: A Woman Scorned: The Betty Broderick Story – a sort of Fatal Attraction in reverse, with Baxter as the spurned, vengeful, and eventually murderous all-American, Southern California suburban housewife whose husband (Baxter’s All the President’s Men husband Stephen Collins) had left her for a younger woman (Michelle Johnson).

She lost the Emmy to Gena Rowlands for Face of a Stranger.

Part II of the story, Her Final Fury: Betty Broderick, the Last Chapter, a depiction of Broderick’s days in court, was aired that same year.

Meredith Baxter’s father was radio announcer Tom Baxter; her mother was TV multitasker Whitney Blake, probably best known for her role as Dorothy Baxter in the hit TV series Hazel (1961–1965), starring Shirley Booth, and as one of the creators of another hit series, One Day at a Time (1975–1984), starring Valerie Bertinelli and Bonnie Franklin.

Married in 1944, Tom Baxter and Whitney Blake were divorced in 1955. One Day at a Time was reportedly inspired by Blake’s own experiences as a divorcée with children.

However, that information is in all likelihood false. Meredith Baxter mentions Anne Baxter in her 2010 autobiography Untied: A Memoir of Family, Fame, and Floundering, saying that, in an effort to be popular at school, she claimed that the All About Eve and The Ten Commandments actress was her mother: “No one recognized the name Whitney Blake. Anne Baxter sounded like she actually could be my mother. And she’d won an Academy Award.” (Italics in the original.)

Besides David Birney, with whom she was featured in the flop 1972 TV series Bridget Loves Bernie, Meredith Baxter had two other husbands: actor and sometime screenwriter Michael Blodgett (as an actor: Beyond the Valley of the Dolls, The Carey Treatment), who died at age 68 in November 2007, and actor/costumer/wardrobe supervisor Robert Lewis Bush (as an actor, Village of the Damned; as a costumer, They Live – both films directed by John Carpenter).

Two years earlier, Baxter claimed that she had been emotionally and physically abused by then husband David Birney – who denied the accusations, calling the charges “an appalling abuse of the truth.”