James Cameron’s Avatar, Guy Ritchie’s Sherlock Holmes, Chris Weitz’s The Twilight Saga: New Moon, and Roland Emmerich’s 2012 may be the movies currently at the top of most box office charts the world over. But one place where Sam Worthington, Kristen Stewart, Robert Pattinson, Taylor Lautner, John Cusack, and Robert Downey Jr. don’t stand a chance is the capital of the Philippines, which is currently hosting the 2009/2010 Metro Manila Film Festival.

In the next couple of weeks – more specifically, from Dec. 25 to Jan. 8 – only the seven movies in competition at the festival, all Philippine productions with (relatively speaking) sizable budgets and popular appeal, are being screened at movie houses in Manila’s metropolitan area.

A remake of star/director Fernando Poe Jr.’s 1980 Philippine cinema classic – itself based on Carlos J. Caparas’ decades-old comics – Ang Panday features plenty of visual effects à la most Hollywood movies (albeit more modestly conceived, under the supervision of Rico Gutierrez), flying monsters à la the Harry Potter movies, medieval fortresses à la The Lord of the Ring movies, and a magic sword à la the one found in John Boorman’s Excalibur and Walt Disney’s The Sword in the Stone.

Besides its Best Picture win, Ang Panday earned Ramon Revilla Jr. the Best Actor award, while veteran Phillip Salvador, who had played the Blacksmith in the 2005 TV series Panday, was named Best Supporting Actor for his portrayal of the evil wizard Lizardo.

Of note: since a movie’s box office represent about 50 percent of its award-worthiness, it should be no surprise that Ang Panday was chosen Best Film. With revenues estimated at more than P20 million (approx. $430,000)*, Revilla Jr.’s star vehicle led the Metro Manila Film Festival’s box office in its first three days.

In this entry, Cuneta plays a rags-to-billions, half-Chinese, half-Filipino widow who is intent on retrieving the affection of estranged daughter Evangelista.

I Love You, Goodbye with Kim Chiu, Derek Ramsey, Angelica Panganiban, and Gabby Concepcion. Featuring heartbreak, death, and lots of attitude, Laurice Guillen’s romantic drama I Love You, Goodbye chronicles the emotional travails of an awful pretty young woman, Lizelle (Angelica Panganiban), who becomes involved with a wealthy surgeon (Gabby Concepcion) whose daughter (Kim Chiu) hates her. If that weren’t all, the obnoxious youngster is having an affair with her would-be stepmother’s former lover (Derek Ramsey). I Love You, Goodbye is one of the seven movies being screened at this year’s Metro Manila Film Festival.

For the record, the Metro Manila Film Festival’s box office runners-up (up to Jan. 2) are the following:

Of the festival’s seven films, the one box office disaster has been boxer Manny Pacquiao’s fantasy flick Wapakman, which has grossed a paltry P2 million ($43,000).

Even though the actors and titles showcased at the Metro Manila Film Festival may be familiar to Filipino audiences, not everyone is impressed with the festival’s selections.

Jorge adds that the popular Shake, Rattle & Roll film series is on its 11th installment since its launch in 1984, Mano Po: A Mother’s Tale is on its sixth since 2002, while the current remake of Ang Panday “is no less than the ninth since its first showing in 1981 [Dec. 1980, as per the IMDb].”

There’s more: the Metro Manila festival “is organized and adjudged by the Metropolitan Manila Development Authority (MMDA) – a government agency tasked with engineering infrastructure with no artistic credentials.”

As found in the Philippine Daily Inquirer, the Metro Manila Film Festival’s criteria for the Best Picture award are the following: 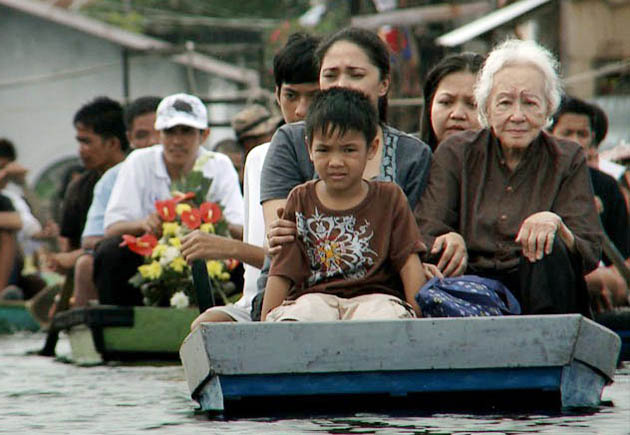 Lola with Anita Linda. Brillante Mendoza’s drama Grandmother / Lola – set universes apart from Ang Panday, Ang Darling Kong Aswang, and other Metro Manila Film Festival fare – was the Dubai Film Festival’s Best Picture Award winner in the Asia-Africa section. Veterans Anita Linda and Rustica Carpio star as two elderly women whose grandsons have one thing in common: death – one is a murderer, the other one is his victim. In a career spanning more than six decades, Anita Linda has worked with top Filipino talent, such as Gerardo de Leon (Sisa, 1951), Eddie Romero (Buhay alamang, 1952), and Lino Brocka (Mother Dear, 1982).

The winners at the 2009 edition of the Dubai Film Festival, which ran Dec. 9–16, were split into two sections: Arab and Asia-Africa cinema. The top narrative feature in each section was, respectively, Michel Khleifi’s Zindeeq and Brillante Mendoza’s Grandmother / Lola.

A Palestinian / British / United Arab Emirates co-production, Zindeeq (an approximate translation would be “Muslim hypocrite”) tells the story of a Palestinian filmmaker and European resident, “M” (Mohammad Bakri), who returns to Ramallah to film witness accounts of the 1948 expulsion of ethnic Arabs from what eventually became Israel and the Occupied Territories.

Going back and forth in time and inside/outside M’s head, Zindeeq also traces the one-letter-named filmmaker’s involvement in today’s issues, as his nephew has killed a man in Nazareth.

A French-Philippine co-production, Lola depicts the relationship between two elderly women (“lola” means “grandmother” in Tagalog) and their respective grandsons: one a murderer, the other his victim.

Anita Linda, a veteran with more than 300 film credits since the 1940s, and Rustica Carpio, another veteran whose film career dates back to the mid-1970s, play the two lolas.

The Dubai Film Festival’s Special Jury Prize went to Mai Iskander’s Garbage Dreams, about two teenagers earning a living in the trash trade in the largest garbage “village” in the world, located in the outskirts of Cairo.

In the Arab section, the Best Actor was Said Bey for The Man Who Sold the World, while Nisreen Faour was chosen Best Actress for her performance as a Palestinian immigrant in the United States in Cherien Dabis’ Amreeka.

In the Asia-Africa section, the Best Actor was Iran’s Hasan Pourshirazi for Mohammad Rasoulof’s dramatic fantasy The White Meadows, while South Africa’s Denise Newman was Best Actress for Shirley Adams, in which she plays an unemployed mother whose son (Keenan Arrison) has become paralyzed after being shot.

No, it’s not just that. Due to less availability of Avatar on theaters, aLOT of filipinos instead are just gonna buy CAM COPIES of the movie from stands and unless you know what was Avatar and how it was made, you will very much less appreciate it to watch on TV in a very bad quality material. In short, it’s just like throwing Mr. James Cameron’s epic work on a garbage.

I’m disappointed myself. With my line of work, we don’t get a lot of long days off except during the Holiday Season. We have planned to watch Avatar with my wife but this film fest has ruined it. I also like to support the Filipino movies but I always find foreign movies to be better. Unlike my childhood, I no longer laugh at Filipino jokes in movies, they no longer make sense or appeal to me. I just hope they get these “forced films to watch” out of the cinemas before we resume work on January 4.

Dudes dont worry, the MMFF is just for one week! After that they’re going to return Avatar and those other movies you’re desperate souls are looking for.

This is so disappointing because they took away Avatar, New Moon, 2012, Sherlock Holmes and all those amazing Hollywood blockbusters with these crappy movies.

Avatar is so goddamn amazing and is a must-watch film from James Cameron, after 14 years of developing it. But was only screened for just a week and alot of people are gonna miss it, they are just going to watch it on TV with a pirated DVD obviously, and it’s going to ruin the hard work of the film. As a result, the movie cant be appreciated with a cam copy of the movie.

I was kind of disappointed that they took Avatar out for this. We went all around the Metro and most of the theaters were dead, as in maybe 20-30 people in line. I hope they get back to the regular blockbusters soon!
Cheers!