Michael Jackson Kids & Family + Mansion Images + This Is It Rehearsal 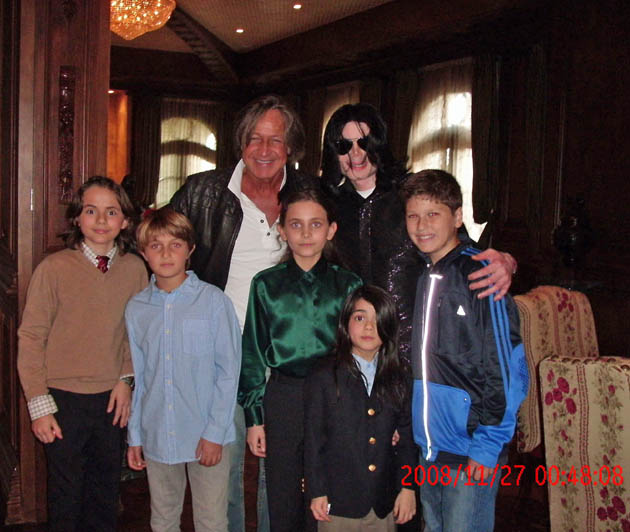 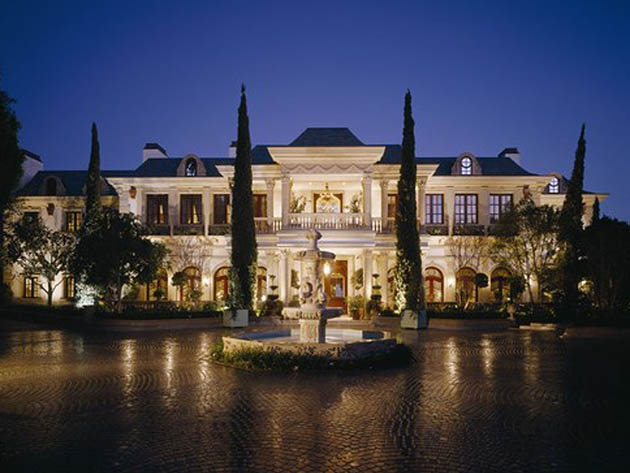 Built by Hadid from a design by Richard Landry, the 22,000 square foot, seven-bedroom mansion pictured above is located on Holmby Hills’ Carolwood Drive. At the time of his death, Michael Jackson was renting it for $100,000 a month.

His most famous residence, however, was the Neverland Valley Ranch on Figueroa Mountain Road in Los Olivos, Santa Barbara County – about 90 minutes northwest of Los Angeles. 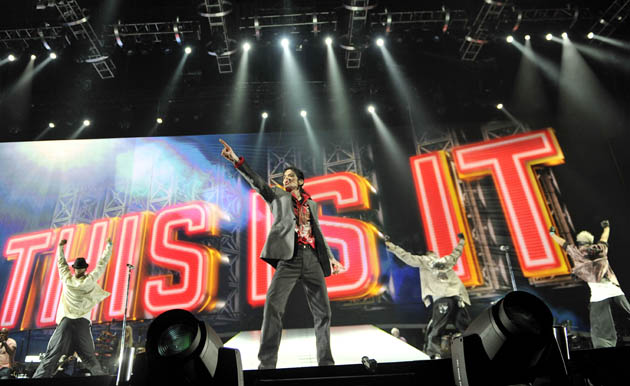 Michael Jackson ‘This Is It’ movie at Los Angeles’ Staples Center.

‘This Is It’ final rehearsal

Pictured above is Michael Jackson at his last This Is It movie rehearsal on June 23, ’09, at the Staples Center in downtown Los Angeles.

British concert promoter AEG Live has announced that full refunds will be available to fans who purchased tickets through authorized agents for any of Jackson’s 50 “This Is It” concerts that were to take place at The O2 Arena in London.

Michael Jackson ‘This Is It’ movie concert.

‘This Is It’ movie box office

Update: Released by Sony Pictures on Oct. 28, ’09, in North America, according to figures found at Box Office Mojo the Kenny Ortega-directed Michael Jackson concert documentary This Is It ultimately grossed $72.09 million in the U.S. and Canada, in addition to $189.09 million internationally, for a grand total of $261.18 million.

Adjusted for inflation, This Is It is the third highest-grossing documentary of any genre at the domestic box office,* trailing only Michael Moore’s anti-George W. Bush/anti-Iraq War political doc Fahrenheit 9/11 (2004) and Luc Jacquet’s nature-oriented March of the Penguins (2000).

Somewhat surprisingly, Michael Jackson had only one single actual role in a feature film: The Scarecrow in Sidney Lumet’s The Wiz, the critically and commercially disappointing all-black version of The Wizard of Oz.

The Wiz‘s other key cast members were Diana Ross as Dorothy, Nipsey Russell as the Tinman, Ted Ross as the (Cowardly) Lion, Lena Horne as Glinda the Good Witch, and Richard Pryor as the Wiz.

Directed by Victor Fleming (with several scenes shot by King Vidor), the 1939 Metro-Goldwyn-Mayer The Wizard of Oz remains the most popular movie version of L. Frank Baum’s novel. The cast featured – following the order found in the preceding paragraph – Judy Garland, Jack Haley, Bert Lahr, Billie Burke, and Frank Morgan as The Wizard.

The Scarecrow was played by Ray Bolger, while Margaret Hamilton brought to life the Wicked Witch of the West.

Besides The Wiz, Michael Jackson was seen in a cameo in Barry Sonnenfeld’s Men in Black II (2002), starring Tommy Lee Jones, Will Smith, Rip Torn, and Lara Flynn Boyle.

Directed by Francis Ford Coppola from a screenplay by Coppola, George Lucas, and Rusty Lemorande, Walt Disney Attractions’ 17-minute short Captain EO (1986) was a relatively early (latter-day) cinematic live-action 3D experiment – decades after Bwana Devil, Kiss Me Kate, and House of Wax, but long before The Final Destination, Journey to the Center of the Earth, and Avatar. (And certainly much more widely buzzed than The Man Who Wasn’t There or Jaws 3-D, to name two other 1980s 3D flicks.)

Nice picture last night I actually saw This Is It.I’m so mad that michael jackson died.My birthday is in August just like Michael Jackson’s

My heart is you MICHAEL. I LOVE YOU FOREVER.

I do like the styl of michel jackson,the songs and the things he did is so much entatainment to me as well as the wholly familly.

micheal jackson died on june 25 2009……. which was my nineth birthday so that sucks

I will love you always, Michael.
You were the most kind, gracious, talented, and beautiful soul. Anyone who saw you or knew of you, recognized that. God focused his light on you,and you blast that light onto to us. Some were jealous of your influence on the world, some did not understand it, but they recognized that you were special in some way. That is why they targeted you. But, now they can’t hurt you anymore, and many of those haters have been converted into MJ fans.

I dont know if i will ever get over the fact that Michael has passed,he is the best soul i have ever known…the fact that throughout all the good that he had done some people still has not learnt to appreciate the goodness of his heart is sad,my heart goes out to his family,even though i have never met him in person i feel like we grew up together.I will always love him,not one day goes by when i dont think about him. love Michael!

The michal jackson is the one of most popular dancer in the whole world…………and i like very much…………….

I will always love Michael and his music. I miss him so much! May the Lord take care of his children! They were so precious to him and his number one priority! Michael, I know the Lord has you in his arms! You will always be in my heart! xo

Michael Jackson would always be the best popstar ever. i love all his songs and his live concerts.
*

michael jackson a simple person with simple heart .thankyou for all kindness you given to us michael .

I was just driving home after teaching two students guitar and was listening to one of the 6 brand new CDs that I, like thousands world wide had just run out and brought, i guess out of a sense of duty for the mans life work. You know to do my bit, to do Michael and his kids a favor!!!
I was about fourteen when thriller came out so nothing could top that album. That time, that era to me was Michael Jackson at his best.
But as i play Invinsable and i sat in the warmth of my out dated bomb, i was asked, as I sit counting my blessing to think of all the lost children…….
I Had to pull over as i sobbed like a child. You see, now that i am 38, i realised i’ve lived 14 years since thriller, I have a faith, i have challenges that i must face as every man. But what brought me to my knees in life was when a “friends” son (8) told me he was being beaten by his father (my now ex “friend”) After a heart breaking 5 years to help the child back to school, trying to build the childs self esteem, and helping to feed and cloth him, not to mention therapy and medication for myself after the child was over power by the father to stay away from me and those that could help him. At this point in my life after all the stuff thrown at MJ, I realise somthing.
Where this child (16 now) is how he is doing, what he is doing to himself i dont know, but the only man on this earth that had words that reached my heart and brought me to tears of ……. I dont know , tears that someone else had real feelings for caring for a child in need and that thats o.k to feel that, was Michael Jackson. Every other man in my life was a wimp, they all tried to keep me away from it. How could i turn away from this beautiful beautiful child telling me these things. I found strength of God to help this child that i had never felt before. I would not trade the experience however painful, for the world. I think i began to understand Michael a little. Michael was no man child, he was A MAN for children.

I Love You Michael J.

Michael Jackson: A Rose By Any Other Name…
The world is plagued by many troubling events; nonetheless, the world chooses to focus on Michael Jackson. That in itself should convince us of just how important Michael Jackson was/is to humanity. It can only serve as a tribute of the highest magnitude. The world knew Michael as a “gentle soul.” However, in predatory circles (in a Darwinian sense), those two words are a signpost of weakness and an open invitation to exploitation. By stark contrast, a global consensus believes that nothing could be further from the truth. Michael’s strength of character came from his personal convictions; he believed in the humane mechanisms that which caused our world to turn, social justice, diversity and peace. Michael was a true Chomskyite! Nobody knew that. [NOTE: A Chomskyite - named after MIT icon and globally renowned intellectual Noam Avram Chomsky - is an individual who brings balance to the human condition.] Michael’s songs were filled with messages of hope and balance, utilizing powerful lyrics and harrowing images. Case in point: “Earth Song.” Watch it. Listen to it. Then, watch it again. One begins to understand what Michael was about. Michael Jackson’s “Earth Song,” “Man In The Mirror” and “We Are The World” are on point. Let the world continue to celebrate what Michael was and let it never endorse any momentary lapses of reason by entertaining America’s new climate of fear, where unfounded allegations, urban mythologies and phantasmagorical notions prey upon our collective or individual conscience. Allow “we the people” to commit to Michael Jackson’s memory/legacy by NOT falling into the counterproductive abyss of facts don’t matter; perception is reality. Let the world pedestalize Michael Jackson as the icon he really was; his lifelong commitment to people and performance excellence warrants nothing less from us. In Michael’s passing, the world remains plagued by troubling events. Those too should come to pass. However, let us not rely on time as the remedy or solution; instead, relying upon “we the people” to make a difference. Michael Jackson made a difference, now it’s your turn.