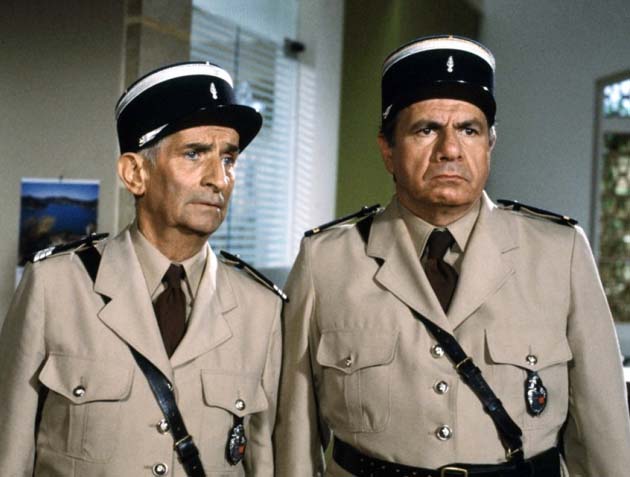 Michel Galabru, best known internationally for his role as a rabidly reactionary politician in the comedy blockbuster La Cage aux Folles, died in his sleep today, Jan. 4, ’16, in Paris. The Moroccan-born Galabru (Oct. 27, 1922, in Safi) was 93.

Throughout his nearly seven-decade career, Galabru was seen in more than 200 films – or, in his own words, “182 days,” as he was frequently cast in minor roles that required only a couple of days of work. He also appeared on stage, acting at the Comédie Française and studying under film and stage veteran Louis Jouvet (Bizarre Bizarre, Quai des Orfèvres), and he was featured in more than 70 television productions.

As found on the IMDb, Michel Galabru’s film debut took place in Maurice de Canonge’s La bataille du feu (“The Battle of Fire,” 1949). He would be seen on the big screen only sporadically in the 1950s, but became a French film fixture from the early ’60s onwards.

In France, he was perhaps best known for his role as the Adjudant Jérôme Gerber in the lowbrow Gendarme comedy franchise directed by Jean Girault and starring Louis de Funès. A sort of French Police Academy, the series began with Le gendarme de Saint-Tropez / The Troops of St. Tropez (1964) and, five films later, came to a close with Le gendarme et les gendarmettes / The Troops & Troop-ettes (1982) – also the last film in de Funès’ extensive career. (He died of a heart attack in Jan. 1983.)

As an ambitious, right-wing provincial judge, Philippe Noiret believes that having the sergeant arrested and guillotined will help his political career. For that, however, he must ensure that the assassin is not deemed insane by the French justice system.

In 2008, Michel Galabru was featured in a small role in Dany Boon’s Welcome to the Sticks / Bienvenue chez les Ch’tis, which became the biggest box office hit (ticket sales) in French cinema history. Initially, he declined to work for only one day, but Boon called back, doubling his offer.

According to the IMDb, in late 2015 Galabru had three films in the can – L’origine de la violence, Ouvert la nuit, and the animated Louis la Chance – in addition to another in production, L’étrange monsieur Trip. 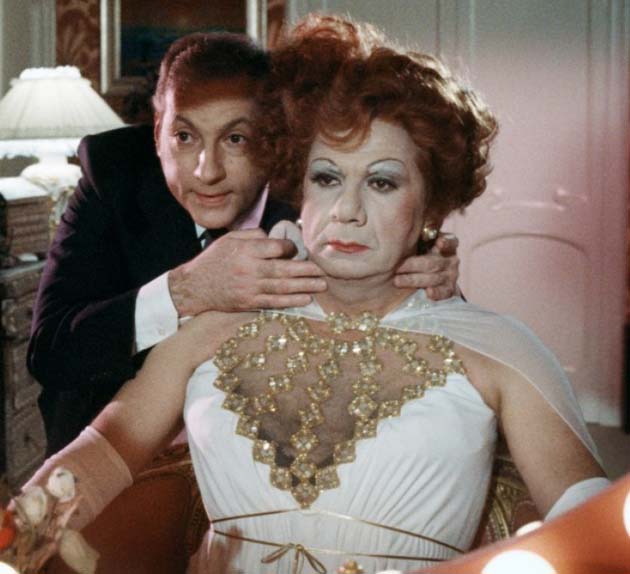 Based on a play by Jean Poiret, Edouard Molinaro’s 1978 international box office hit La Cage aux Folles features Michel Galabru as parliamentarian Simon Charrier, Secretary General of France’s Union for Moral Order and father of a young woman (Luisa Maneri) who unexpectedly announces that she is going to marry her boyfriend (Rémy Laurent).

Initially a source of concern, the marriage becomes the possible salvation of Charrier’s political career after the leader of the Union for Moral Order dies while having sex with, as the desolate Secretary General tells his equally far-right Christian wife (Carmen Scarpitta), “a prostitute … A minor, no less … A minor … and black!”

A “white wedding,” the wife ardently believes, preferably with “the pope’s blessing,” will be the perfect solution for this pesky image problem. The couple and their daughter immediately set out for the French Riviera to meet the groom’s parents.

Dinner at their prospective in-laws – Renato Baldi (Ugo Tognazzi) and wife (Michel Serrault in drag) – is somewhat uncomfortable, but that’s nothing compared to the sheer horror the Charrier couple feel after learning that Renato is the gay owner of the drag nightclub La Cage aux Folles, while his wife is actually Renato’s companion of 20 years, Albin, La Cage aux Folles’ top star.

The film offers a happy ending for the young couple, but poor M. Charrier must dress up in drag in an (ultimately botched) attempt to escape from journalists on his trail.

As Charrier, Michel Galabru is simply outstanding; in my view, his is one of the most remarkable comic performances in film history. Whether in a dark suit and tie or donning a redhead wig and slinky white dress (“White makes me look fat. I wanted black!”), he steals every scene in which he appears, even outacting Michel Serrault’s outlandish Albin.[1] 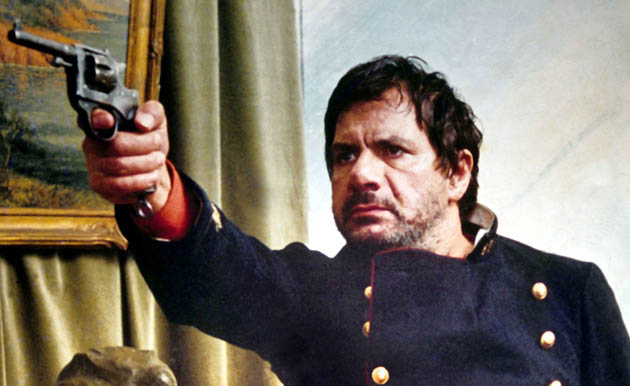 Michel Galabru in ‘The Judge and the Assassin / Le Juge et l’assassin’: Best Actor César winner for playing a former military man who also happens to be a serial killer and rapist.

The hard life of an actor

In Oct. 2015, Michel Galabru was interviewed for Le Figaro to discuss Genndy Tartakovsky’s Hotel Transylvania 2, in which he voiced Vlad (Mel Brooks in the original).

Galabru told interviewer Hugo-Pierre Gausserand that he received a pension of only 2,400 euros, adding that acting “is perhaps the profession where there’s more unemployment than any other. Even the stars experienced these issues. Martine Carol became successful and then one day she no longer worked because Bardot had arrived. She killed herself…”

Yet in early 2015, at age 92, Galabru was anything but unemployed, starring at Paris’ Théâtre Montmartre in the one-man show Le cancre (“The dunce”), co-written by himself and Eric Reynaud-Fourton.

No ‘affection’ for his movies

When asked by Gausserand whether he felt any “affection” for his movies, Galabru replied, “Neither affection nor anything, I don’t give a damn! The films were what they were. I worked on them because I needed to. I appear in whatever is offered me.”

And finally, on his thoughts about being considered a “monument of French cinema,” Galabru snapped: “These are words. ‘Words, words,’ like someone used to say. Let’s talk Gabin, let’s talk De Funès, Michel Simon. But not me. I’m a theater worker … And that in itself isn’t bad.”

Elsewhere, Galabru stated that life was no longer the same following the death of his brother in 2014 and, a year later, that of his wife. “For me, life is hardly worth living,” he confessed. “During the day, I get by because there’s movement, but at night, when I’m all by myself, there are these horrible moments. That’s why, if God is good, I’d like him to show it.”

Notwithstanding his problems with the acting profession, Michel Galabru founded the acting school Cours Galabru, where Jean Galabru is a teacher.

[1] Directed by Mike Nichols from a screenplay by Elaine May, and starring Robin Williams, Nathan Lane, Gene Hackman (in the old Michel Galabru role), Dianne Wiest, and Hank Azaria, in addition to Calista Flockhart and Dan Futterman as the young couple in love, the 1996 Hollywood remake of La Cage aux Folles, The Birdcage, is mostly a pretty sad affair.

Although Gene Hackman manages to elicit a few chuckles, his performance mostly serves to bring back fond memories of Galabru’s superlative work.