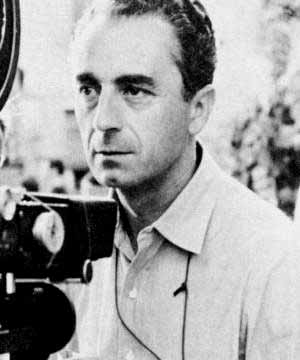 Michelangelo Antonioni, the film master of modern alienation, despair, and ennui, was the third important personage of world cinema to die in the last three days – Ingmar Bergman and Michel Serrault were the other two. Antonioni, who had suffered a debilitating stroke in 1985, died on Monday, July 30, in Rome. Antonioni was 94.

Italian President Giorgio Napolitano said Tuesday that Italy had “lost one of cinema’s greatest protagonists and one of the greatest explorers of expression in the 20th century.”

Purple prose aside, Antonioni was one of the most influential film artists of the past century. During his 61-year film career – from the short Gente del Po / People of the Po Valley in 1943 to a segment in Eros in 2004 – Antonioni directed more than 30 films and wrote about as many. Half a dozen or so of those – often starring the director’s muse, Monica Vitti – are considered some of the most profound cinematic explorations of the human mind.

Il Grido / The Cry (1957), L’Avventura (1960), La Notte  (1961), L’Eclisse (1962), Il Deserto rosso / Red Desert (1964), and Blow-Up (1966) all deal in one way or another with the vapidity – or rather, the insignificance – of human life in the industrialized world, a realm in which people are unable to either communicate or empathize with one another, and one where reality and illusion more than co-exist – they intersect continuously.

“I don’t know how to put this: He’s just a maestro, and everybody loved him,” Jack Nicholson, who starred in Antonioni’s 1975 drama Professione: reporter / The Passenger, told the Los Angeles Times. “… He was a man of joy and impeccable taste. His whole life was dedicated to modestly being a brilliant artist.”

“I owe my courage to Michelangelo’s attention,” says Monica Vitti. “I owe my strength to his confidence.”

As for Antonioni’s views on his role as a filmmaker, in October 1960 the director himself wrote in Cahiers du Cinéma, “The principle behind the cinema, like that behind all the arts, rests on a choice. It is, in [Albert] Camus’ words, ‘the revolt of the artist against the real.’ If one holds to this principle, what difference can it make by what means reality is revealed?”

“The two of them – along with the other masters whose work had defined, from the mid-’50s through the late ’60s, a golden age of high-brow movie love – were pillars in the pantheon, canonical figures toward whom the only acceptable posture was one of veneration. They were discussed in seminar rooms, dissected in honors theses and ritualistically projected in darkened dining halls by the more serious of the campus film societies.

“This was truer of Mr. Bergman than of Mr. Antonioni, some of whose later works still carried a frisson of countercultural daring and disrepute: the desert orgy at the end of Zabriskie Point; the rock ‘n’ roll in Blow-Up; Jack Nicholson in The Passenger. But with both directors, the impulse that brought you to their movies was less likely to be aesthetic ardor than a sense of cultural duty or historical curiosity. This was true even though both continued to make films. Your appreciation of Fanny and Alexander or Identification of a Woman rested on the understanding that these were late works and that their authors belonged definitively to an earlier era.”

One thing that I found interesting about Scott’s article – and about most discussions regarding Ingmar Bergman and/or Michelangelo Antonioni – is that essayists seem to ignore the fact that the real early work of either director was actually quite accessible and remarkably different from their mid-career output. Bergman’s first film wasn’t The Seventh Seal. Antonioni’s wasn’t L’Avventura, or even Il Grido.

Check out It Rains on Our Love or Night Is My Future and you’ll get a very different Ingmar Bergman than the one responsible for Wild Strawberries, The Virgin Spring, or Persona. Antonioni’s Le Amiche (aka The Girlfriends) is pure melodrama – highly effective and well-acted melodrama, mind you, but melodrama all the same, and universes away from the starkness of La Notte or the coolness of Blow-Up.

As an aside: I wouldn’t label either Blow-Up or Zabriskie Point – both of which were actually made during the height of the counterculture movement in the mid-to-late ’60s – as two of Michelangelo Antonioni’s “later works.” After all, even though his output became more sporadic from the early ’70s on, Antonioni kept on working all the way to 2004.

And really, if there’s a “counterculture” element to be found in The Passenger, that wouldn’t be by then four-time Academy Award-nominated Hollywood star Jack Nicholson, but the epoch-making-ly controversial Last Tango in Paris’ Maria Schneider.

Martin Scorsese on Michelangelo Antonioni in “The Man Who Set Film Free” in the New York Times:

Nineteen sixty-one … a long time ago. Almost 50 years. But the sensation of seeing L’Avventura for the first time is still with me, as if it had been yesterday.

Where did I see it? Was it at the Art Theater on Eighth Street? Or was it the Beekman? I don’t remember, but I do remember the charge that ran through me the first time I heard that opening musical theme – ominous, staccato, plucked out on strings, so simple, so stark, like the horns that announce the next tercio during a bullfight. And then, the movie. A Mediterranean cruise, bright sunshine, in black and white widescreen images unlike anything I’d ever seen – so precisely composed, accentuating and expressing … what? A very strange type of discomfort. The characters were rich, beautiful in one way but, you might say, spiritually ugly. Who were they to me? Who would I be to them?