Michelle Williams poses backstage after winning the Golden Globe as Best Actress in a Motion Picture Comedy or Musical for her work in Simon Curtis’ My Week With Marilyn. In the above photo, Williams is seen holding her trophy in the press room at the 69th Annual Golden Globe Awards at the Beverly Hilton hotel in Beverly Hills, on Sunday, Jan. 15.

For the record, Michelle Williams’ competition in the Best Actress in a Motion Picture Comedy or Musical category consisted of:

Michelle Williams has been nominated for two Academy Awards and, prior to My Week with Marilyn, two Golden Globes, for the following:

Weisz and Portman won both the Oscar and the Golden Globe in their respective categories.

A critics’ favorite, Williams is expected to receive her third Oscar nomination this year.

Michelle Williams has been featured in about 30 films in the past two decades. Her movie debut took place in Daniel Petrie’s Lassie in 1994. Besides the aforementioned titles, notable films include Kelly Reichardt’s Meek’s Cutoff, with Bruce Greenwood, and Wendy and Lucy, with Will Oldham; Martin Scorsese’s Shutter Island, with Leonardo DiCaprio and Mark Ruffalo; and Wim Wenders’ Land of Plenty, with John Diehl. 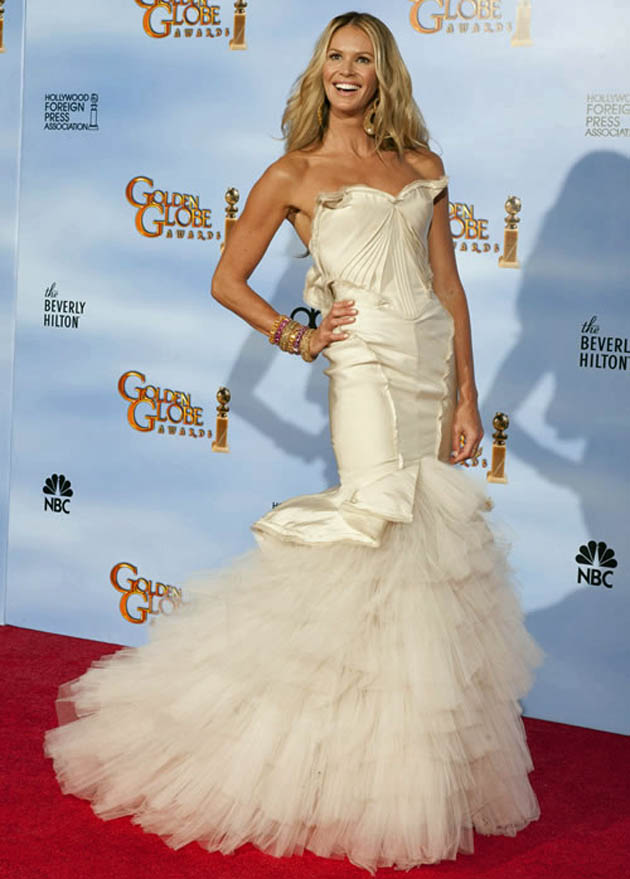 Elle Macpherson poses backstage in the press room at the 69th Annual Golden Globe Awards. Macpherson was one of the many presenters at the ceremony held at the Beverly Hilton hotel. 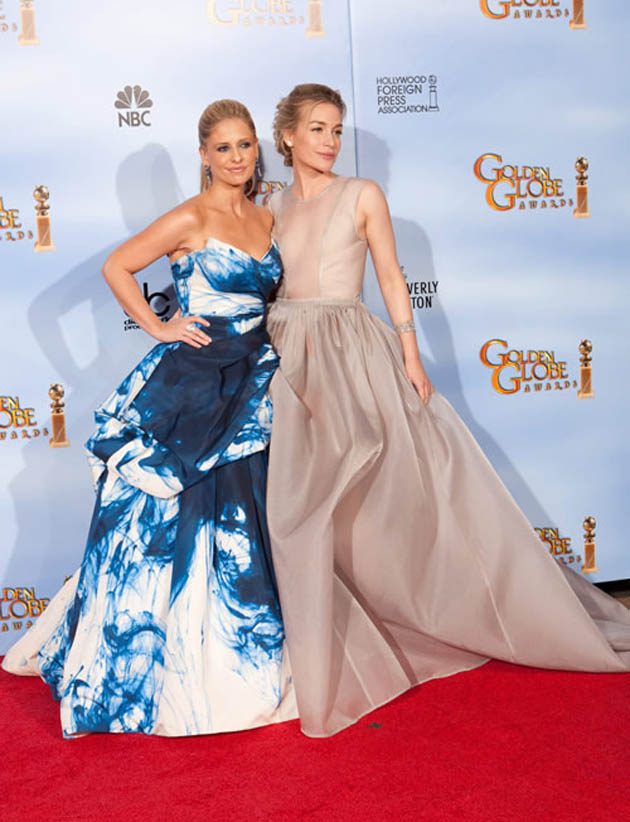 The star of the television series Buffy the Vampire Slayer, Sarah Michelle Gellar has also appeared in about two dozen feature films. Among these are Jim Gillespie’s I Know What You Did Last Summer; Roger Kumble’s Cruel Intentions, with Reese Witherspoon and Ryan Phillippe; and Raja Gosnell’s Scooby-Doo, with Freddie Prinze Jr. 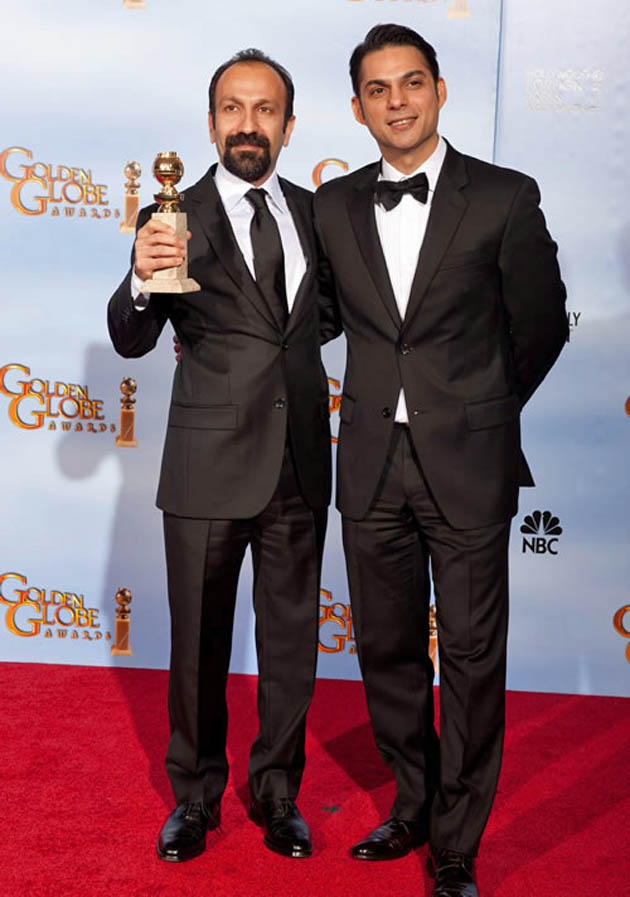 The 2012 Golden Globe winner for Best Foreign Language Film was A Separation (Iran), produced by Jodaeiye Nader az Simin and distributed by Sony Pictures Classics in the United States. Accepting the award were director Asghar Farhadi and one of the film’s stars, Peyman Moaadi. In the above photo, Farhadi and Moaadi are seen backstage in the Golden Globes’ press room at The Beverly Hilton.

Jan. 18 update: The Academy of Motion Picture Arts and Sciences has announced that A Separation is one of the nine semi-finalists for the 2012 Best Foreign Language Film Oscar. Among the other films still in the running are Wim Wenders’ Pina, Joseph Cedar’s Footnote, and Roschdy Zem’s Omar Killed Me. 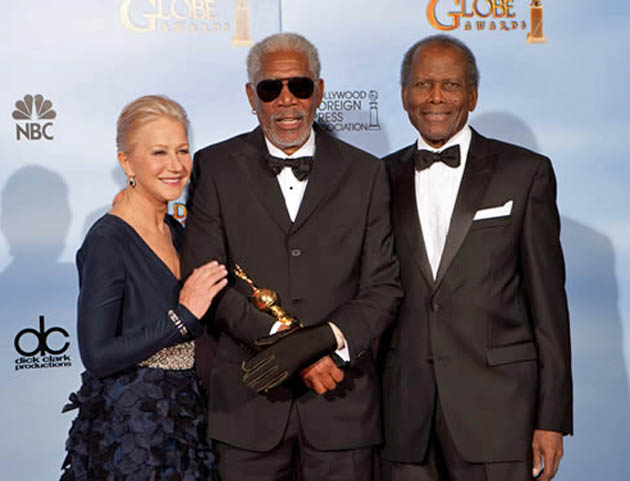 Having received the Cecil B. DeMille Award for his “contribution to the entertainment field,” Morgan Freeman poses with presenters Helen Mirren and Sidney Poitier backstage in the Golden Globes’ press room.

Back at the 1990 ceremony, Morgan Freeman won the Best Actor – Drama Golden Globe for his performance as the one who does the driving in Bruce Beresford’s Driving Miss Daisy (1989), co-starring Jessica Tandy and Dan Aykroyd.

Helen Mirren, for her part, won the Best Actress Oscar for Stephen Frears’ The Queen (2006), while at the 1964 ceremony Sidney Poitier became the first male black actor to win an Oscar: for Ralph Nelson’s sentimental drama Lilies of the Field (1963).

Previous recipients of the Hollywood Foreign Press Association’s Cecil B. DeMille Award include the following: 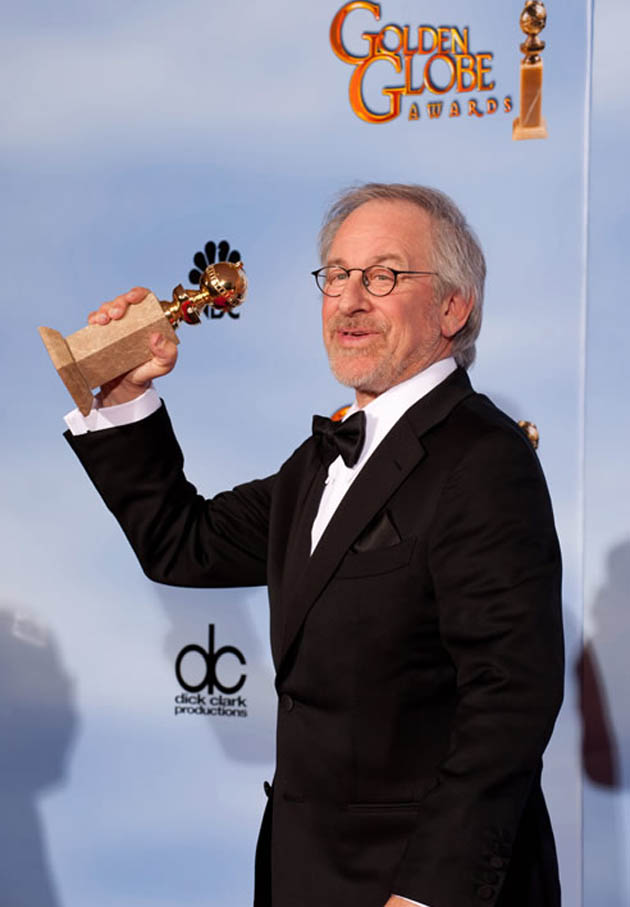 Steven Spielberg won the Best Animated Feature Film Golden Globe for for The Adventures of Tintin, directed by Spielberg, and produced by Spielberg, Kathleen Kennedy, and Peter Jackson. The film’s distributors were Paramount and Columbia (depending on the territory). In the above photo, Spielberg is seen backstage in the Golden Globes’ press room at the Beverly Hilton hotel.

This year, Spielberg’s War Horse was in the running for the Best Picture – Drama Golden Globe, but it lost to Alexander Payne’s The Descendants, a family drama-comedy featuring George Clooney, Shailene Woodley, Judy Greer, and Beau Bridges. Despite his film’s nomination, Spielberg failed to be shortlisted in the Best Director category.

Besides Elle Macpherson, the extensive list of Golden Globes presenters at this year’s ceremony included: