John Schlesinger’s 1969 socio-psychological drama Midnight Cowboy, one of the better best picture Oscar winners, will be screened as part of the Academy of Motion Picture Arts and Sciences’ “Monday Nights with Oscar” series on Monday, March 16, at 7:30 p.m. at the Directors Guild of America Theatre in New York City.

Adapted by Waldo Salt from James Leo Herlihy’s novel, Midnight Cowboy stars Dustin Hoffman and Jon Voight (delivering what may well be the best performance of his career and one of the best performances of the 1960s) as two social outcasts – one lame, the other lame-brained – who become partners in the business of seducing rich dowagers so as to realize their own version of the American Dream.

Since Midnight Cowboy was made in the late 1960s – the beginning of a brief period when American studios had the guts (and the intelligence) to tackle complex material in an mature, honest manner – the film offers no final redemption, no moral punishment, and no rose-colored finale. Instead, from the moment Jon Voight’s hopeful cowboy arrives in Manhattan to the last scene showing the two pals aboard a bus in sunny Florida, Midnight Cowboy never flinches away from its merciless portrayal of those for whom The Dream remains just that. 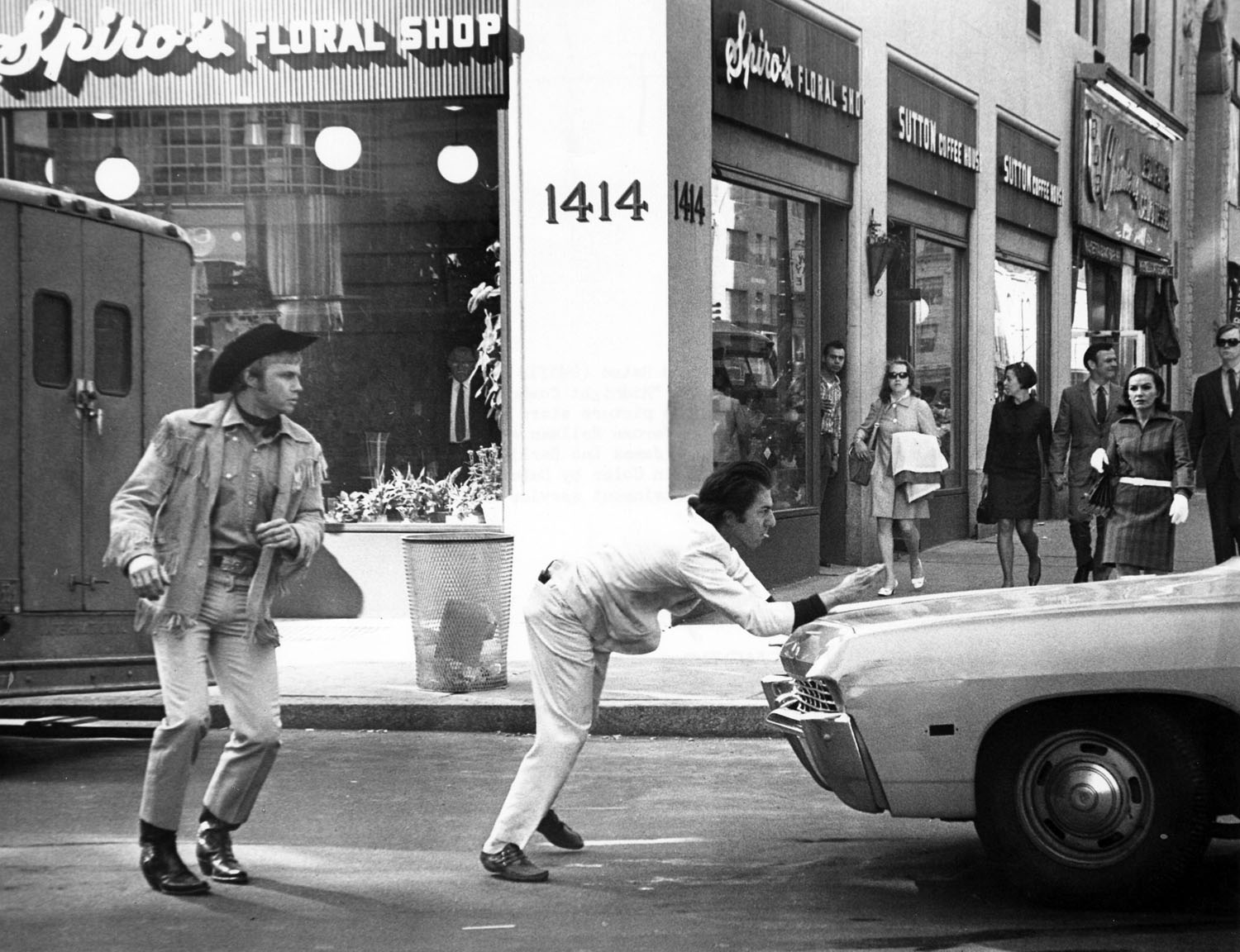 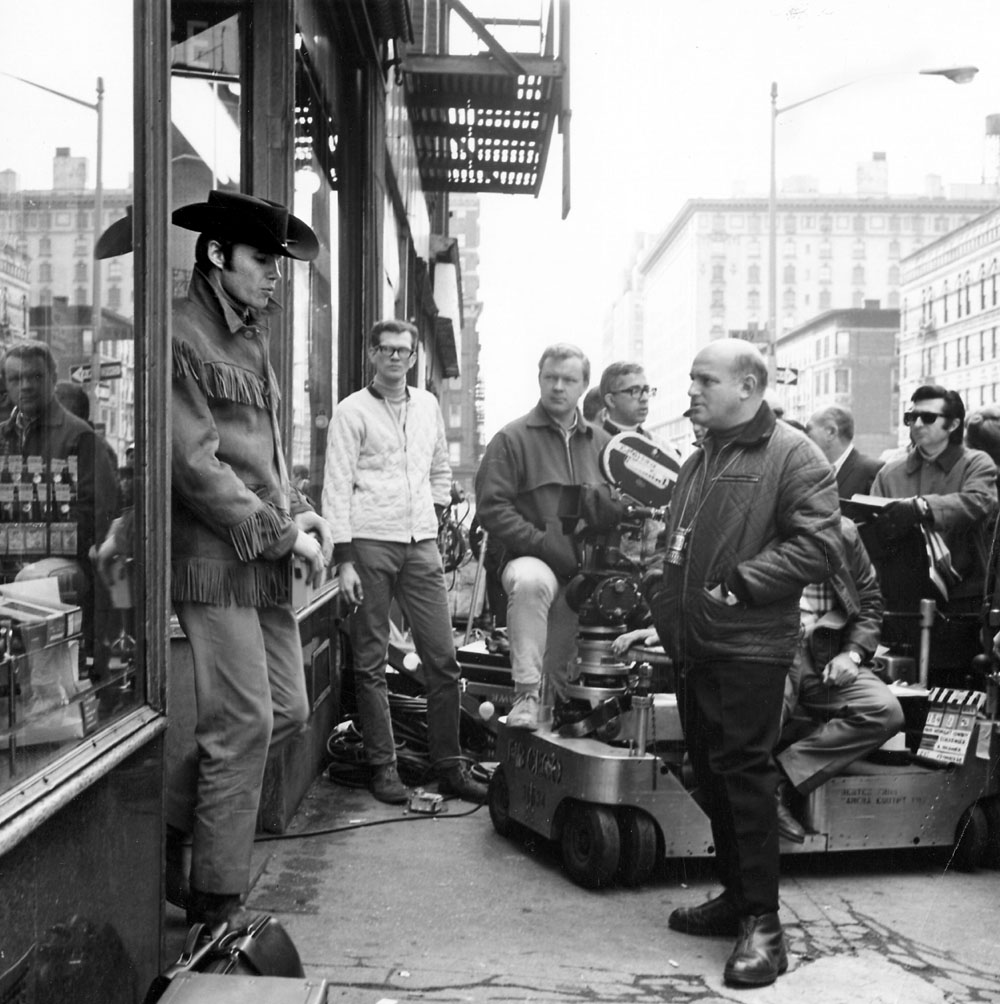 Midnight Cowboy earned seven Oscar nominations: Best Picture (Hellman, producer), Actor (Hoffman, Voight), Actress in a Supporting Role (Miles), Directing (Schlesinger), Film Editing (Hugh A. Robertson), and Writing – Screenplay based on material from another medium (Salt). It went on to win in the Best Picture, Directing and Writing categories. Voight (and Hoffman, for that matter) absurdly lost the best actor Oscar to John Wayne in True Grit – one of the Academy’s most pathetic injustices. 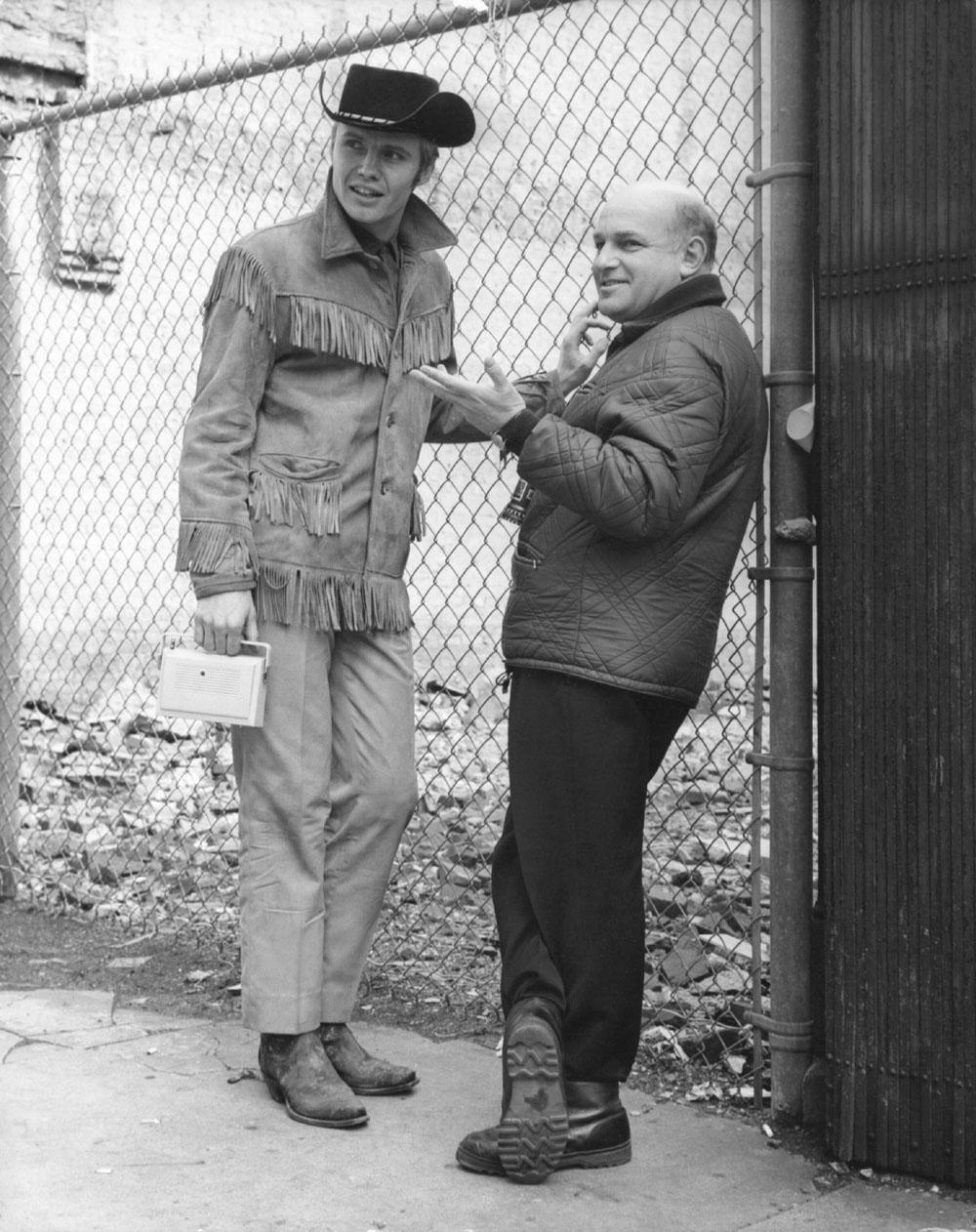 “My performance in that movie created the X rating for that film,” Balaban later told The Advocate, “and the rating was downgraded to an R when it won the Best Picture Academy Award [the downgrade came about in 1971, the year after the Oscar win]. There was a picture of me in Playboy when they did an issue about sex in the ’70s. Isn’t it funny that in 2002 I can play a gay part [in Gosford Park] and nobody even cares, yet in 1969 I played a gay part which almost stopped the movie getting released?

“I came from New York theater, and when you come from theater you tend to ask whether it was an interesting part or whether it was well-written. It never occurred to me that it would cause such a stir, and I was hardly nervous about whether my image could afford it, I was still in college and so excited about getting a film.”

In any case, thanks to its male-on-male mouth-on-penis scene, Midnight Cowboy holds the distinction – and that is a distinction – of being the only X-rated motion picture to win the Best Picture Oscar.

Tickets for Midnight Cowboy are $5 for the general public and $3 for Academy members and students with a valid ID. Tickets may be purchased online at www.oscars.org or by mail (a printable order form is available in the Events & Exhibitions section of the website (see Venues & Ticket Information). Tickets may also be purchased at the box office on the night of the event (subject to availability). The box office opens at 5:30 p.m. Doors open at 6:30 p.m. All seating is unreserved. For more information, call (212) 821-9251.

The DGA Theatre is located at 110 West 57th Street in New York City. 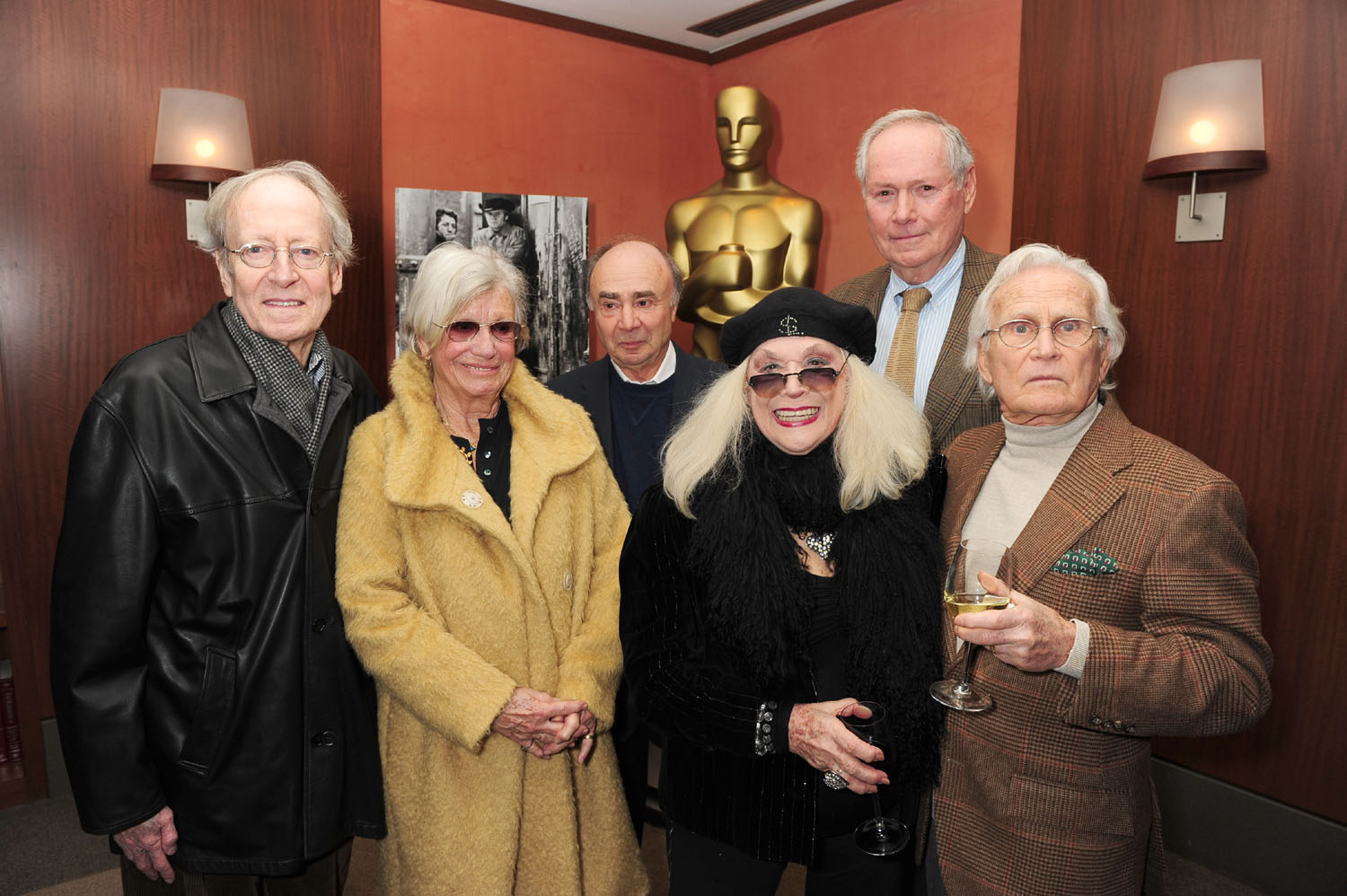 Update: The Academy of Motion Picture Arts and Sciences presented the 1969 Best Picture winner Midnight Cowboy as part of the “Monday Nights with Oscar” series on Monday, March 16, at 7:30 p.m. at the Directors Guild of America Theatre in New York City. 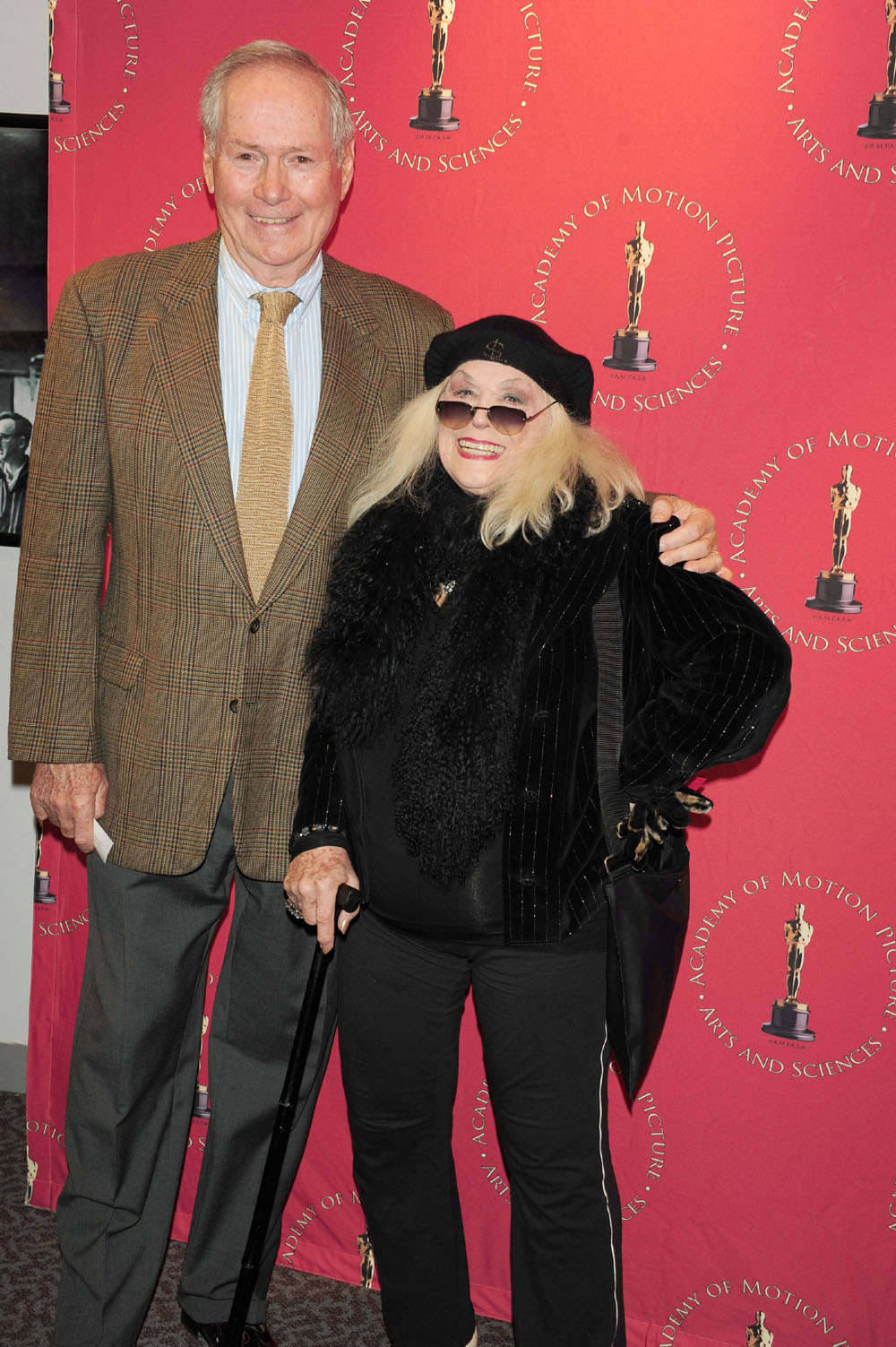 You Don’t Mess with the Zohan Box Office: Adam Sandler (Not Gay)...