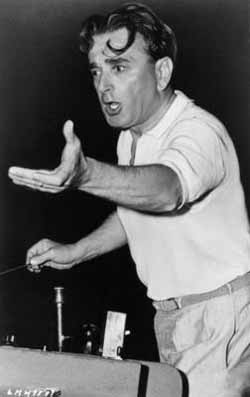 The Academy of Motion Picture Arts and Sciences will be presenting a weekend-long centennial salute to 17-time Oscar-nominated Hungarian composer Miklós Rózsa beginning on Friday, Aug. 17, at 7:30 p.m. at the Samuel Goldwyn Theater in Beverly Hills.

The opening evening will be hosted by music critic and historian Jon Burlingame, and will feature an overview of Rózsa’s film career, including clips Jungle Book (1942), Spellbound (1945), The Naked City (1948) and Ben-Hur (1959). (Rózsa’s score is one of the few positive elements in William Wyler’s bloated Oscar-winning epic.)

The complete schedule is as follows:

Rózsa won Academy Awards for his original scores for Spellbound, A Double Life (1947) and Ben-Hur, and was a three-time double nominee (in 1941, 1944, 1961) as well as a triple nominee in 1945. (Until 1945, dozens of films could be nominated in the music categories.) Rózsa received Oscar nominations for his original scores for The Thief of Bagdad; Lydia and Sundown in 1941; Jungle Book; Double Indemnity and Woman of the Town in 1944; The Lost Weekend, and A Song to Remember (with Morris Stoloff) in 1945; The Killers; Quo Vadis in 1951; Ivanhoe; Julius Caesar in 1953; and El Cid. Rózsa received one nomination for Original Song for “Love Theme From El Cid” (“The Falcon and The Dove”) (Music by Rózsa; Lyrics by Paul Francis Webster).

Tickets to each evening of “An Academy Centennial Salute to Miklós Rózsa” are $5 for the general public and $3 for Academy members. They will be available beginning August 1 by mail or at the Academy box office during regular business hours. Tickets also may be purchased online at www.oscars.org/events. There are no minimum order requirements and no transaction or processing fees. Tickets may be purchased online until noon PDT on the day of the event.