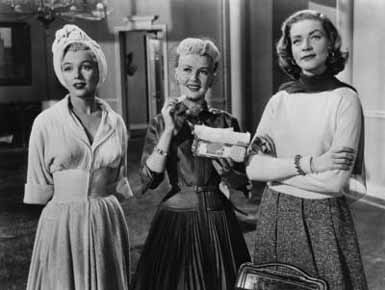 Millionaire match made in heaven – or rather, New York City. Marilyn Monroe, Betty Grable, and Lauren Bacall try to calculate the number of diamonds, cookies, and hunky young men they’ll be able to buy once they land millionaire husbands. Image: © A.M.P.A.S.

One of the earliest examples of CinemaScope, How to Marry a Millionaire is an enjoyable romp starring three of Hollywood’s brightest stars of the 1950s: Betty Grable, Marilyn Monroe, and Lauren Bacall.

The film will be screened as part of the “Monday Nights with Oscar” series in New York City on Sept. 11. See “Press Release” below.

How to Marry a Millionaire follows an old Fox formula (inspired by the stage play The Greeks Had a Word for Them) that was recycled every few years – three cute women look for rich husbands – in films such as Three Blind Mice (1938), Moon Over Miami (1941), and Three Little Girls in Blue (1946).

How to Marry a Millionaire was a respectable box office success, and it marked the change of the guard at Fox: Betty Grable, the studio’s top star of the 1940s, was about to pass the Queen of the Lot title to the younger Marilyn Monroe. Though still highly popular, Grable was to retire from films a mere two years later.

Note: The Greeks Had a Word for Them was filmed in 1932. It was produced by Samuel Goldwyn, and released by United Artists. Joan Blondell, Ina Claire, and Madge Evans played the three golddiggers.

The three girls in Three Blind Mice were Loretta Young, Marjorie Weaver, and Pauline Moore. In Moon Over Miami they were Betty Grable, Carole Landis, and Charlotte Greenwood (though hardly a girl by then, but still plugging along); and in Three Little Girls in Blue, June Haver, Vivian Blaine, and Vera-Ellen.

New York, NY –  Oscar®-nominated actress Lauren Bacall will be the special guest at the “Monday Nights with Oscar” screening of How to Marry a Millionaire, on Monday, September 11, at 7:30 p.m. at the Academy Theater at Lighthouse International in New York City.

Bacall will participate in a post-screening discussion moderated by Robert Osborne, The Hollywood Reporter columnist, host of Turner Classic Movies and official biographer of the Academy Awards®.

How to Marry a Millionaire, starring Bacall, Marilyn Monroe and Betty Grable, tells the story of three couturier models who lease a posh Sutton Place apartment in New York City in their search for eligible millionaires. Along the way, they discover love, and perhaps their real fortunes, in the most unlikely fellows.

Directed by Academy Award nominee Jean Negulesco (Johnny Belinda), the 1953 film is based on the plays The Greeks Had a Word for It (1930) by Zoe Akins and Loco (1946) by Dale Eunson and Katherine Albert. It was adapted for the screen and produced by Nunnally Johnson.

How to Marry a Millionaire earned an Academy Award nomination for Color Costume Design for 20th Century Fox wardrobe director Charles LeMaire, a 16-time Academy Award nominee and winner for All about Eve, The Robe and Love Is a Many-Splendored Thing, and Travilla (William “Bill” Travilla), a four-time Oscar nominee and winner for The Adventures of Don Juan. Travilla was also known for designing Monroe’s costumes.

The print for this screening, recently restored by 20th Century Fox and added to the Academy Film Archive collection, begins with a six-minute sequence of composer Alfred Newman conducting the 20th Century Fox Symphony Orchestra as it plays part of the score he wrote for Street Scene, the 1931 United Artists release.

Tickets may be reserved by calling 1-888-778-7575. Depending on availability, tickets may be purchased the night of the screening. Doors open at 7 p.m. For more information, visit www.oscars.org/events.