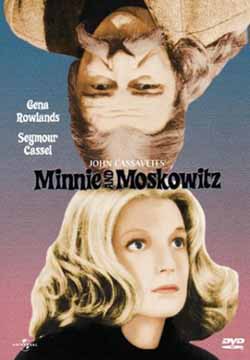 All choice entails risk. Thus, John Cassavetes’ artistic choice to structure his films based mostly on improvisation rather than hard scripted dialogue is a decision that can result in great films, like Faces, ok films like Shadows, and bad films like Minnie and Moskowitz (1971), an awkwardly written and poorly acted comedy. Admittedly, the film offers a few brilliant moments that reveal Cassavetes at his filmmaking best, but it also shows far too much sloppy editing, amateurish overacting, and a really forced love story between two characters that have nothing in common and are not given any reason to bridge that gap.

Seymour Moskowitz (Seymour Cassel) is a professional car parker (a.k.a. valet) whose mother finances his move from New York to Los Angeles. He is, as his mother admits, a bum, a wacko, a long-haired aging hippy, with a handlebar mustache, and who clearly has mental – or, at least, emotional – problems. Cassel portrays him as a hyperactive, immature, loudmouthed, foolish stoner type from the first through the last shot.

One day, while at work, he rescues Minnie Moore (Gena Rowlands), a docent at an arts museum, from a date from hell with Zelmo Swift (Val Avery). She had been set up on a blind date with Zelmo after her married lover (Cassavetes) dumped her because his wife found out about the affair and tried to commit suicide. Zelmo is a balding, fat man with a propensity to shout, and one of the funniest scenes in the film takes place when he is telling Minnie all about his life, and embarrasses her by shouting all sorts of intimacies across the restaurant. When she can take no more and tries to leave, he gets violent with her. That’s where Moskowitz steps in. He ends up beating Zelmo up, losing his job, and driving away with Minnie. He then hits on her, and then they go for a hot dog. That’s when she realizes Moskowitz is as crazy as Zelmo.

The next day he shows up professing undying love for Minnie. We are led to believe that Minnie is a smart woman, but why she doesn’t immediately call the cops on Moskowitz is a gaping hole in the plot. That she then goes out repeatedly with Moskowitz only adds to the mystery, for he is every bit as rude and obnoxious as Zelmo was, and much more insistent.

Moskowitz, as crazy as he is, is a bit more understandable a character than Minnie. Earlier in the film, he too had a run in with a loudmouth, even wackier, character at a restaurant; a guy called Morgan Morgan (Timothy Carey). This, too, was a brilliant scene that reeked of naturalness.

Another great scene comes near the film’s end, when, just four days after meeting each other, Moskowitz proposes and Minnie accepts. This is following a scene where Minnie has hurt Moskowitz’s feelings in front of his clients. He drives away and leaves her high and dry. One of the clients drives her home, only to be confronted by a psychotic Moskowitz. The man thrashes Moskowitz, who – in fighting back – hits Minnie. After helping each other recover, they end up engaged.

The next day Minnie’s mother (played by Lady Rowlands, Gena’s mother) and Moskowitz’s mother (played by Katharine Cassavetes, John’s mother) meet them at a restaurant. It’s another funny scene where Sheba first feels up Minnie’s breasts and puts down her son, “Albert Einstein he’s not. Pretty he’s not. Look at that face. A future he doesn’t have; he parks cars for a living….Look at my son. He’s a bum.” But it is poorly shot and framed. One can even see the actors trying to refrain from laughing, and what power and humor the scene has wanes with what looks like outtakes.

Then, we’re at the wedding, which ends in mid-sentence. That is another of the many scenes in Minnie and Moskowitz ruined by poor editing. (Two other glaring examples occur when Seymour is at Sheba’s apartment, and when he’s on an airplane to LA.) Then there is a backyard party and the film ends.

The scoring is virtually nonexistent and the camera work is appalling, as is Cassel’s acting. Considering the stellar work on Faces, including Cassel’s own acting, one would hardly believe the same team was responsible for this mess. Faces had great realistic scenes, and the humor that flowed from it was never forced. Minnie and Moskowitz never relents with Moskowitz’s stupidity, and why Minnie is drawn to him is never laid bare nor is it in the least bit believable. Yes, she’s hurt by her lover. So? Only Rowlands’ acting shows any professionalism.

Cassavetes’ boosters always say that his films are about truth. Well, putting aside the manifest fallacy that any art can be “truth,” even were one to accept that premise, Minnie and Moskowitz is a testament for the need of a little judicious fibbing to up the art quotient. Certainly, the realism of several humorous scenes is way above the typical Hollywood screwball domestic comedies of earlier times, but Cassavetes ruins their power by never letting his two leads share a mature or subtle dramatic moment.

Since Moskowitz displays no vulnerability or moderation, he comes across as a dislikable – if not despicable – person, and one that, in a truly ‘truthful’ film, someone like Minnie Moore would not waste a minute of her life on. In fact, you just know that the marriage of these two characters will last no longer than the film they’re in, but Cassavetes accepts it and wants you to do the same. Fine, but acceptance is not caring, and without a character to care for or empathize with, few films can succeed.

Even though the clothes and some of the dialogue are passé, that is not the reason Minnie and Moskowitz has not aged well. When it was made, all independent films were thought to have that rough, shoestring-budget quality, and that seemed a virtue of sorts. Things, however, have changed.

Indy filmmakers like John Sayles and David Gordon Green have shown that a low budget does not automatically mean low production values. Minnie and Moskowitz, for its part, looks cheap, silly, dated, and amateurish in all technical aspects, but especially so in the writing where loose ends hang all over the place.

When it was over, my wife told me that she felt like she was waiting for a punchline that never came, and it’s true. Minnie and Moskowitz is not really a single film, but more like a series of brilliant and horrible vignettes, or blackout sketches that never quite connect up into a coherent whole. Had the film recapitulated that feeling into the romance, it might have been something wonderful. As it is, Minnie and Moskowitz is merely a noble but head-scratching failure.

A Woman Under the Influence (1974): John Cassavetes’ Indie Is Major Letdown

Bette Davis Young & Older: From Jezebel to The Nanny + Centennial...

Couldn’t disagree more, absolutely love this film, why should it be a bad film just because it doesn’t follow along the guidelines of a “good” film? Good films come in many different forms and styles.