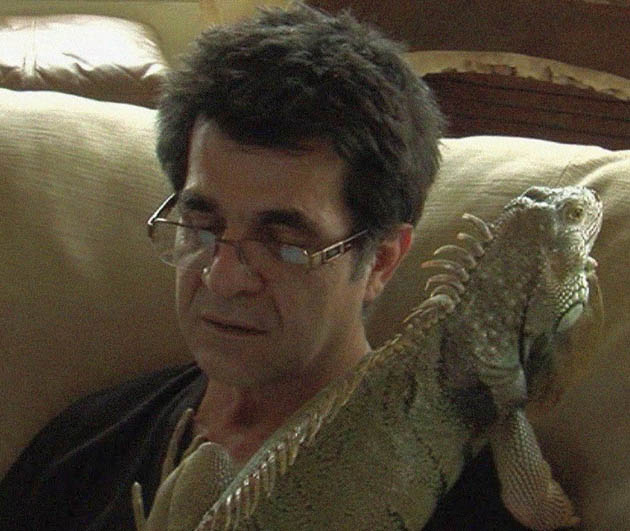 This Is Not a Film with Jafar Panahi and the iguana Igi. Under house arrest[1] following accusations of spreading “propaganda against the Islamic Republic” of Iran, filmmaker Jafar Panahi (Cannes Caméra d’Or winner, The White Balloon; Venice Golden Lion winner, The Circle) got documentarian Mojtaba Mirtahmasb (Lady of Roses) to record his day-to-day activities and a reading of a screenplay for a planned movie project. The result is This Is Not a Film, which, James Bond-style, had to be smuggled out of Iran, and, Cinderella-style, may end up receiving a Best Documentary Feature Oscar nomination – though the category has been deemed a “miserable failure”. This Is Not a Film is one of 15 semi-finalists in that category.
Contents hide
1. Best Documentary Oscar semi-finalists: ‘Miserable failure’?
1.1. Iranian movie at the Oscars?
1.2. ‘The House I Live In’ & ‘5 Broken Cameras’
1.3. 2013 Best Documentary Feature Oscar semi-finalists
1.4. Have Michael Moore’s Documentary Branch rule changes been effective?
1.5. Bypassed documentaries
1.6. ‘Miserable failure’
1.7. Jafar Panahi gets six years in prison

Co-directed by Jafar Panahi, currently serving a six-year jail sentence for “propaganda” against the theocratic Iranian government, and Mojtaba Mirtahmasb, This Is Not a Film is one of 15 semi-finalists for the 2013 Best Documentary Feature Academy Award. According to the Academy of Motion Picture Arts and Sciences’ press release, 126 documentaries had initially qualified in that category.

A day in the life of Jafar Panahi, This Is Not a Film was shot while the filmmaker, appealing his jail sentence, was under house arrest. Saved onto a USB drive, the film was placed inside a cake and smuggled out of Iran.

Eventually screened at the 2011 Cannes Film Festival, This Is Not a Film currently boasts a 100 percent approval rating and 9.1/10 average among Rotten Tomatoes‘ top critics.

Iranian movie at the Oscars?

A couple of months ago the Iranian government withdrew its submission for the Best Foreign Language Film Oscar “in protest” against the anti-Muslim “film” Innocence of Muslims.

Ironically, thanks to This Is Not a Film an Iranian movie may end up in the Oscar 2013 race after all. Adding insult to irony, one not chosen by the Iranian authorities.

That should serve as a lesson not only to Iranian theocrats but also to the Academy: Countries don’t make movies; filmmakers do.

Among the other Best Documentary Feature Oscar 2013 semi-finalists are the following:

The 15 contenders for a nomination in the 2013 Oscars’ Best Documentary Feature category are listed below in alphabetical order:

At the beginning of the year, Academy Governor Michael Moore announced several changes in the voting rules in the Best Documentary Feature category.

Eligible movies must now be screened at least one week in either New York City or Los Angeles, and must have earned a published review in either the Los Angeles Times or the New York Times. Instead of separate voting committees for individual batches of eligible films, every Documentary Branch member can now nominate any eligible entry.

These changes were supposed to prevent made-for-television documentaries from entering the race while increasing the quality of potential Oscar 2013 contenders – according to this logic, if a documentary was screened commercially in either of the U.S.’ top two urban markets, it must have been better than those that didn’t find distribution. By the same token, the rules were to have made it easier for the more popular documentaries to make the cut.

So, is that how it all worked out?

Of course, out of this year’s 126 eligible films there was room for only 15 on the list of Best Documentary Feature Oscar semi-finalists. Missing from the roster were the following high-profile releases:

Also nowhere to be found on the list was the year’s most successful documentary at the U.S. box office, John Sullivan and Dinesh D’Souza’s widely derided 2016 Obama’s America.

Weeks before the list of Oscar 2013 semi-finalists was announced, Michael Moore himself referred to his plan (or at least part of it) as a “miserable failure.” One doesn’t have to be a soothsayer to predict more Documentary Branch rule changes in the near future.

According to the Academy’s press release, the members of the Documentary Branch “viewed the eligible documentaries for the preliminary round of voting.” Now, how many members actually watched all eligible 126 documentaries – or even just half of them – will remain a mystery for all eternity.

Documentary Branch members will next choose five nominees out of the 15 titles on the shortlist. After that, the entire Academy membership will be allowed to select the winner.

The 2013 Academy Award nominations will be announced on Jan. 10. The Oscar ceremony will be held on Feb. 24 at the Dolby Theatre in Hollywood.

[1] Jafar Panahi was sentenced to six years in prison, in addition to a two-decade ban on making movies, writing screenplays, or giving interviews. He has also been forbidden from leaving the country, except in case of a medical emergency or if he decides to undertake the Hajj pilgrimage.

Mojtaba Mirtahmasb, for his part, had also gotten in trouble with the law in fall 2011, when he and five other filmmakers were arrested after taking part in a BBC documentary about Ali Khamenei, known as the Supreme Leader of Iran.

Jafar Panahi This Is Not a Film image: Wide Management.