Actress Misty Upham, gone missing since Oct. 6, was found dead on Thursday, Oct. 16, in a wooded area along the White River in suburban Seattle. The cause and time of death remain unclear. Best known for her roles in Frozen River, which earned her an Independent Spirit Award nomination, and August: Osage County, Upham was 32.

According to a statement her father, Charles Upham, sent to media outlets, Misty Upham was last seen on Oct. 5, walking from her sister’s apartment in Muckleshoot, Washington. He added that she suffered from bipolar disorder and had bouts of depression and anxiety – she had gone missing in the past – but said he didn’t believe she was suicidal.

“The truth is Misty is not stressed over money or career. Her career is going great,” he wrote last Sunday, Oct. 12. “As her father I do not fear she committed suicide. I feel that she has been hurt by accident or someone has put her in harm’s way.”

Since Upham’s body was found, there have been conflicting reports as to the cause of her death, whether it was suicide or an accident. But according to Upham’s friend Tracy Rector, speaking on behalf of the actress’ family, one thing seemed to be clear:

The main thing her family wants people to know is that the Auburn Police Department would not cooperate in looking for Misty. There’s a long history of police harassment and friction between the police and the Muckleshoot community here, and her family feels they dropped the ball and Misty perhaps would have been found if the police had taken it seriously.

In the last few hours, August: Osage County actress Juliette Lewis has used social media to assert that Upham feared for her life, tweeting “#RIPMistyUpham I am in shock and greif [sic]. I pray the police do a murder investigation. They’re saying not “foul play” when ofcourse [sic] it is.”

Misty Upham survived many things that many don’t early on in life. She fought for the voiceless feircely [sic]. She understood suffering and the deepest pain. She had a presence everyone saw and felt. It is this presence that will continue. Out of the dark space in which her light got dimmed. I will remember her as tuff. Wise. Funny. Spiritual. And hopeful. 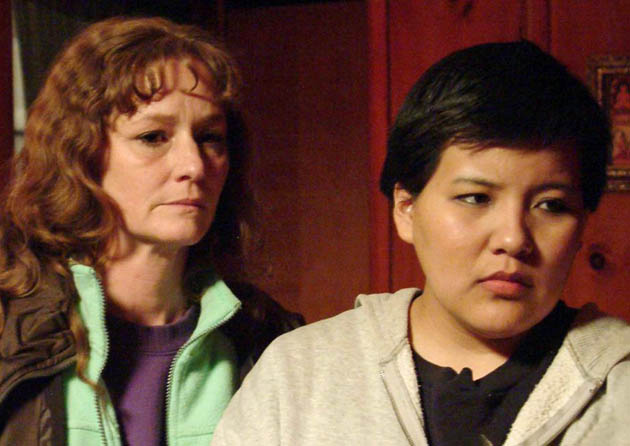 A Blackfoot Native American, Misty Upham was born on July 6, 1982, in Kalispell, Montana. She was raised in Auburn, Washington, south of Seattle.

Misty Upham’s most notable film role, however, was that of a financially strapped Mohawk bingo parlor employee in Courtney Hunt’s 2008 drama Frozen River. In the movie, Upham’s character joins forces with a discount store clerk (Melissa Leo) to smuggle immigrants from Canada into the United States by way of the frozen St. Lawrence River. As to be expected, tragedy ensues.

Upham was shortlisted for a Best Supporting Actress Independent Spirit Award, but lost to Penélope Cruz for Woody Allen’s Vicky Cristina Barcelona. Upham was bypassed for the Academy Awards, even though fellow player Melissa Leo managed to land a Best Actress Oscar nomination.

The August: Osage County cast, including Upham, was eventually nominated for a SAG Award,* but only Meryl Streep and Julia Roberts went on to be shortlisted for the Oscars.

As per the IMDb, Upham was currently shooting Phil Claydon’s thriller Crawlspace, featuring Michael Vartan, and had another project in the works, A Yellow Raft in Blue Water.

On television, Misty Upham had small roles in HBO’s Big Love, starring Bill Paxton, and in several TV movies, among them Skinwalkers (2002), starring Adam Beach and Wes Studi, and Dreamkeeper (2003), with August Schellenberg and Eddie Spears. Both movies centered on Native American characters.

CNN.com was a key source for this article on the death of actress Misty Upham.