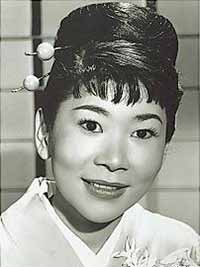 Miyoshi Umeki, the first East Asian performer to win an Academy Award, died on Aug. 28 in Licking, Missouri. She was 78.

Umeki won a Best Supporting Actress Oscar for her beautifully nuanced performance as an innocent Japanese maiden in love with American serviceman Red Buttons in the 1957 melodrama Sayonara.

Born on May 8, 1929, in Otaru, on the northern Japanese island of Hokkaido, Umeki began her show business career singing with American G.I. bands at nightclubs in Japan. As per the IMDb, she also had a role in the 1953 film Youthful Jazz Daughter.

After making a couple of records for RCA Japan – as Nancy Umeki – a talent scout persuaded her to move to New York City in 1955. In less than a year, she had a contract with Mercury Records and was appearing regularly on the television variety show Arthur Godfrey and His Friends. That, in turn, led to her role in Sayonara.

In Joshua Logan’s bloated adaptation of James Michener’s novel, Umeki played the naive Katsumi, whose forbidden romance with Red Buttons’ American serviceman leads to tragedy. Starring Marlon Brando, the film became one of the biggest hits of the late 1950s, though some critics have complained that it feels too stilted.

Academy members apparently felt otherwise, as Sayonara received a total of ten Oscar nominations – including best film, best director, and best actor (Brando) – winning four of those. Both Umeki and Buttons came out victorious in the supporting categories.

“I really don’t know what to say,” Umeki remarked upon receiving her statuette. “I wish somebody would help me right now. I have nothing in my mind. Thank all American people.”

In 1958, Umeki starred on the Broadway stage, playing an innocent Chinese mail-order bride who comes to San Francisco to marry one man but ends up falling in love with another in Richard Rodgers and Oscar Hammerstein II’s Flower Drum Song. The following year, she received a Tony nomination for best actress in a musical, and in 1961 reprised the role in Henry Koster’s overblown but financially successful film adaptation.

Though some have complained that a Japanese actress had no right to play a Chinese mail-order bride, Miyoshi Umeki happens to be the film’s saving grace. Her innocence is fully believable, and never does her performance come across as calculated – a major feat for someone who had played the same role hundreds of times on the stage. (The show had run for 600 performances.)

Despite her success in Flower Drum Song, from then on Umeki’s few subsequent film roles were relatively minor ones. She supported Glenn Ford and Donald O’Connor in George Marshall’s Cry for Happy (1961); Jim Hutton and Paula Prentiss in Richard Thorpe’s The Horizontal Lieutenant (1962); and Laurence Harvey and France Nuyen in John Sturges’ A Girl Named Tamiko (1963).

After that, Umeki turned to television. She had guest roles in several series, among them The Donna Reed Show, Dr. Kildare, The Virginian, Rawhide, and Mister Ed, and from 1969 to 1972 she played the housekeeper in the sitcom The Courtship of Eddie’s Father, starring Bill Bixby as the widower whose son is addicted to the role of matchmaker.

After the series came to an end, Umeki retired from show business, setting up a Los Angeles-based editing machine business with her second husband, documentary producer-director Randall Hood. (Her first marriage, to TV executive Frederick W. Opie, had ended in divorce; Hood, whom she married in 1968, died in 1976.) She lived for some time in Hawaii, and moved from the Los Angeles suburb of North Hollywood to Missouri about four years ago.

According to her son, Miyoshi Umeki didn’t like discussing her career, opting to live as a wife and mother.