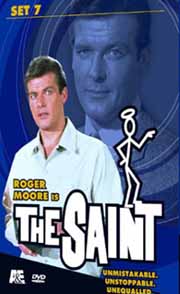 British cinematographer, director, and film and television producer Monty Berman, whose television series The Saint became an international hit, died in London last June 14. His obit was reported in The [London] Independent on Aug. 4.

Born in London in 1912, at the age of 17 Berman became a camera assistant at Twickenham Studios. In 1935, he developed into a full-fledged cinematographer, working with Michael Powell on the Margaret Lockwood vehicle Some Day.

Berman’s career was curtailed by World War II, during which he served with the Eighth Army Film Unit. Once hostilities were over, Berman worked as a camera operator in films such as Hue and Cry (1946), Daughter of Darkness (1947), and The End of the River (1947).

Around that time, Berman and Robert S. Baker – both had been sergeants with the film unit – co-founded Tempean Films, which went on to produce about 30 B movies, mostly thrillers. Usually, Berman acted as both producer and cinematographer, with Baker at times directing. Since they couldn’t afford sets, Berman and Baker resorted to the then unusual (in Britain) practice of shooting their films on location.

Among their best-known productions were the thriller The Quiet Woman (1951), starring Jane Hylton and Dora Bryan (replacing a recalcitrant Diana Dors); the more upscale The Voice of Merrill / Murder Will Out (1952), directed and written by Tempean’s top director, John Gilling, and starring Valerie Hobson, Edward Underdown, and James Robertson Justice; The Lost Hours (1952), starring Jean Kent and Mark Stevens; Blind Spot (1958), with a young Michael Caine as a small-time crook; and The Siege of Sidney Street (1960), co-directed by Berman and Baker, and with Donald Sinden and Nicole Berger as the leads.

With the demise of the B-movie factory line because of television, Berman and Baker eventually opted to join the enemy. Their TV series The Saint, starring Roger Moore, became an enormous international success. It ran in the United Kingdom from 1962 to 1969.

Other TV series in which Berman was involved include The Baron, starring Steve Forrest as an undercover agent, and The Champions, also about spies.

Margaretta Scott: Things to Come + All Creatures Great and...