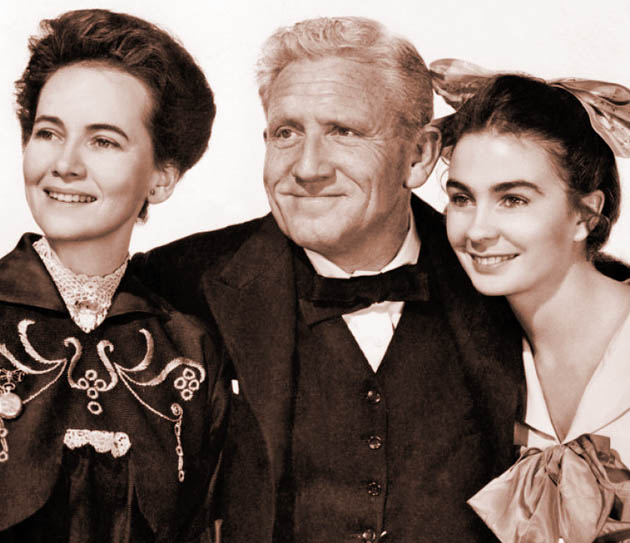 Teresa Wright in the 1950s: From Marlon Brando leading lady to spinsters and mother roles in less than five years

(See preceding post: “Teresa Wright vs. Samuel Goldwyn: Nasty Falling Out.”) “I’d rather have luck than brains!” Teresa Wright was quoted as saying in the early 1950s. That’s understandable, considering her post-Samuel Goldwyn choice of movie roles, some of which may have seemed promising on paper.[1]

Wright was Marlon Brando’s first Hollywood leading lady, but that didn’t help her to bounce back following the very public spat with her former boss. After all, The Men was released before Elia Kazan’s film version of A Streetcar Named Desire turned Brando into a major international star.

Chances are that good film offers were scarce. After Wright’s brief 1950 comeback, for the third time in less than a decade she would be gone from the big screen for more than a year.

Perhaps to compensate for her absence, in 1952 she was seen in three releases. Two of these, however, were minor fare:

Teresa Wright, Ray Milland and Joan Fontaine in ‘Something to Live For.’

‘Something to Live For’: ‘The Lost Weekend’ redux

Teresa Wright’s third 1952 movie – and her third and final pairing with Ray Milland – was an A production for Paramount: George Stevens’ melodrama Something to Live For, in which she has a minor role as the faithful wife of a recovering alcoholic (Milland) who develops a more-than-charitable interest in a dipsomaniac actress (Joan Fontaine).

“Advance reports on Something to Live For which have leaked out of the very hush-hush projection rooms in Hollywood,” claimed Famous Stars, “say that Teresa’s performance in her role of Milland’s wife is her most convincing portrayal to date, and is an odds-on favorite to bring [her] another Academy Award nomination.”

But despite the high pedigree of all involved and Dwight Taylor’s serious-minded screenplay, Wright’s poor luck in her choice of material held out.[2]

With shades of Billy Wilder’s The Lost Weekend, the heavy-handed Something to Live For turned out to be a weak follow-up to Stevens’ acclaimed A Place in the Sun the year before. There would be no Academy Award nominations for any of the talent involved.

Things were equally unsatisfying on the personal front. Also in 1952, Teresa Wright and Niven Busch’s decade-long marriage came to an end. At the time, she accused him of making her feel useless “by refusing to allow me the right to have anything to say in the care and raising of my children and the running of our house.”

Niven Busch, who by then had moved to a Northern California ranch to devote his time to writing novels, would die at age 88 in August 1991.[3]

Mother and spinster roles at 35

Throughout the 1950s, Teresa Wright – looking quite matronly in her mid-30s – continued to work in movies, but almost invariably in supporting roles.

Teresa Wright’s last actual lead in a feature film was in Noel Langley’s low-budget Paramount release The Search for Bridey Murphy (1956), adapted from a (widely disputed) book by doctor and hypnotist Morey Bernstein. She played a woman – based on real-life Colorado housewife Virginia Tighe – who, after being induced into a trance by Bernstein (Louis Hayward), realizes she is the reincarnation of a 19th-century Irishwoman.

Instead of original choice Dorothy McGuire, Wright was top billed for the last time in Helmut Käutner’s The Restless Years (1958), portraying the emotionally unstable single mother of teenager (and up-and-coming star) Sandra Dee, a victim of her “illegitimate” birth and the film’s de facto star. John Saxon was the adolescent who falls for Dee – only so the young couple can have their lives nearly destroyed by lies, rumors, and prejudice in this surprisingly effective soap opera based on Patricia Joudry’s play Teach Me How to Cry and adapted for the screen by the well-regarded Edward Anhalt (Panic in the Streets, The Member of the Wedding).

In spite of its qualities, The Restless Years turned out to be the poor cousin of two other similarly themed releases of the late ’50s: Mark Robson’s Best Picture Oscar nominee Peyton Place (1957) and Delmer Daves’ blockbuster A Summer Place (1959), also starring Sandra Dee – this time around playing opposite Dorothy McGuire and Troy Donahue.

Now entering middle age, following The Restless Years 40-year-old Teresa Wright would remain away from the big screen for more than a decade. 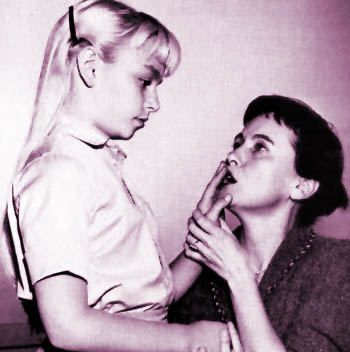 Teresa Wright as Anne Sullivan in ‘The Miracle Worker,’ with Patty McCormack as Helen Keller.

The fact that Teresa Wright’s film career went downhill rather rapidly in the ’50s was probably a good reason why, beginning early in the decade, she kept herself busy on television.

During that period, Wright would be featured in about 30 episodes of various TV shows and anthology series, most notably:

The same year “The Miracle Worker” was aired, Teresa Wright would make a triumphant return to the Broadway stage.

[1] Teresa Wright quote via Famous Stars, which is also the source for the – in all likelihood PR-engendered – buzz regarding Wright’s performance in Something to Live For.

Also worth noting, the reviewer for the trade journal Harrison’s Reports praised The Men as “compelling drama,” remarking that it starred Teresa Wright and “Mario Brando.”

He was also the son of legendary stage actress Laurette Taylor (her trio of movies in the ’20s: Peg o’ My Heart, Happines, and One Night in Rome), who had been a hardcore alcoholic, and playwright-theatrical producer Charles A. Taylor (who, in the 1910s, also wrote a handful of screenplays, e.g., Blue Jeans, Crime and Punishment).

Released in 1951, A Place in the Sun earned George Stevens the Best Director Academy Award. This version of Theodore Dreiser’s An American Tragedy starred Montgomery Clift, Elizabeth Taylor (no connection to Dwight Taylor), and Shelley Winters. 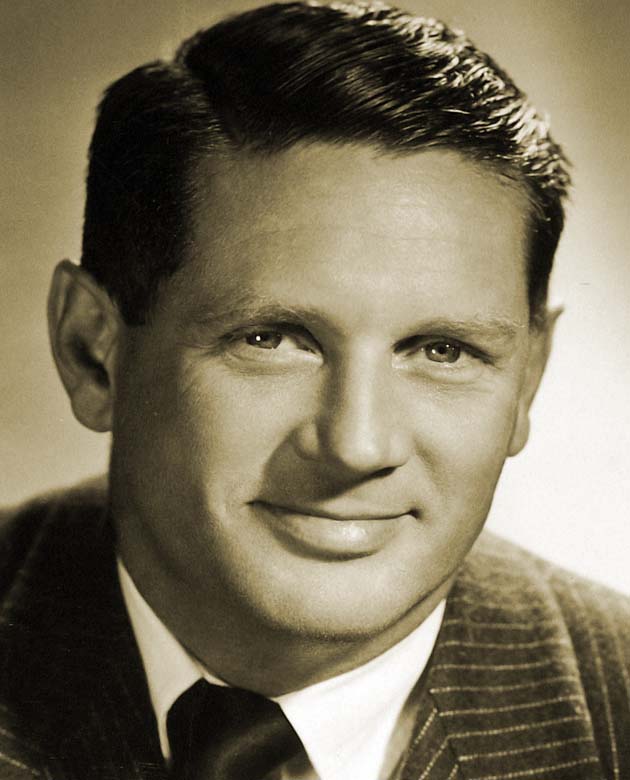 Regarding his marriage to Wright, Niven Busch was once quoted as saying, “Our philosophy of life is very simple; Teresa washes and I dry.”

He would remarry twice after their divorce.

His Freudian Western novel The Furies was made into a movie in 1950. Barbara Stanwyck and Wendell Corey starred for director Anthony Mann.

In 1951, Busch moved to a ranch in Hollister, Northern California, where he could write novels, among them Californian Street: A Novel (1959) and The San Franciscans (1962).

Also of note is his fictionalized account of Richard Nixon’s life, The Gentleman from California (1965) – “…or The Faking of the President – 1972,” opined Kirkus Reviews. “The subtitle is ours, but it fits[.] Actually, as an Advise & Consent reminder that the road to the White House is sometimes pretty dirty, the novel almost succeeds.”

The year before his last novel came out, the 87-year-old writer made his acting debut in a small role in Philip Kaufman’s The Unbearable Lightness of Being (1988). He is the Old Man seen on screen when Sabina (Lena Olin) receives a letter informing her of the deaths of Tomas (Daniel Day-Lewis) and Tereza (Juliette Binoche).

Busch, who had been named a Regent’s Professor at University of California, died of heart failure on August 25, 1991, at his San Francisco home.

Information on Niven Busch via the author’s page in the novel The Carrington Incident.

[4] Sign of the times: If Escapade in Japan is at all remembered these days, it’s not because of Teresa Wright, its post-World War II-Japan setting, or the fact that it was one of the last RKO productions (ultimately released by Universal).

Instead, it’s because gun-toting Dirty Harry and The Gauntlet star Clint Eastwood – a.k.a. the Gran Torino star-director and the Letters from Iwo Jima and American Sniper filmmaker – has a bit role in the movie. Eastwood was an Arthur Lubin discovery.

[5] Unsurprisingly, “The Louella Parsons Story” boasted an all-star cast, with the following making cameo appearances as themselves:

Additionally, Louella Parsons had a cameo as herself. William Lundigan hosted that particular episode.

Image of Teresa Wright as Anne Sullivan and Patty McCormack as Helen Keller in ‘The Miracle Worker’: CBS.

Don Mankiewicz Movies: I Want to Live! + The Chapman Report