Andre Soares 4 years ago
Valentino with Rudolf Nureyev and Michelle Phillips. Ken Russell’s 1977 Rudolph Valentino biopic Valentino is based on the dubious 1966 bio (“Was he a great lover – or a sham?”) penned by Chaw Mank and Brad Steiger. A coal miner’s son and self-proclaimed psychic, Mank was one of the most influential – and surely the busiest – movie buff of them all, for decades founding and/or attempting to found fan clubs dedicated to promoting an eclectic array of stars, ranging from Marilyn Monroe and Elvis Presley to John Boles and Johnny Downs. Chaw Mank has a chapter dedicated to himself in Anthony Slide’s movie buff history Magnificent Obsession.
Contents hide
1. Movie buff passion explored in ‘Magnificent Obsession’: Q&A with film historian & author Anthony Slide
1.1. From screenwriters & gay porn stars to J.D. Salinger
1.2. More on Anthony Slide
1.3. The Curse of the Movie Buff
1.4. Movie buff history book ‘Magnificent Obsession’: Q&A with author Anthony Slide
1.5. What’s a movie buff?
1.6. Movie buff vs. movie fan
1.7. Movie buff vs. film scholar
1.8. Movie buff evolution

Largely ignored and/or dismissed by scholars, historians, academicians, and film people themselves, the movie buff has been around for – almost – as long as the movies themselves. Perhaps as early as the dawn of the 20th century, when the first fans of the new invention/art began collecting reels of Georges Méliès or Alice Guy shorts or compiling lists of the flickers they had watched at the local nickelodeon.

This particular brand of movie fan is the chief topic of the latest book by veteran author and film scholar (and closeted movie buff?) Anthony Slide: Magnificent Obsession: The Outrageous History of Film Buffs, Collectors, Scholars, and Fanatics (University Press of Mississippi, 2018).

According to the University Press of Mississippi’s Magnificent Obsession press release, Tony Slide used his “more than fifty years in the field” to offer “his personal, up-front knowledge” of the sometimes humorous, sometimes tragic, and always intriguing movie buff world.

Among the eclectic movie buff types of various eras, backgrounds, and interests found in Magnificent Obsession are the following: 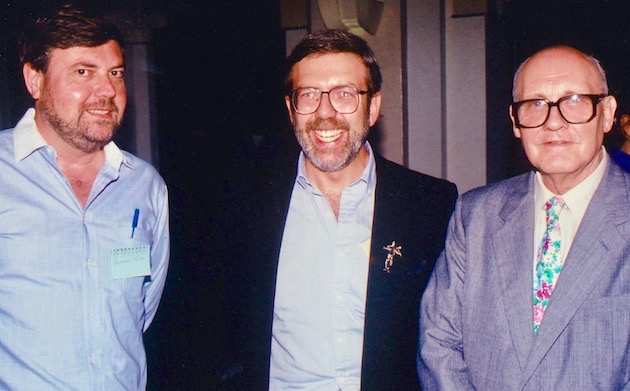 Back in the 1960s in his native Britain, Birmingham-born Anthony Slide co-founded and co-published The Silent Picture, in his own words, “the first serious quarterly devoted to the art and history of the silent film.”

Since then, he has authored dozens of film books, among them Early American Cinema, The Big V: A History of the Vitagraph Company, The Silent Feminists, and Silent Players. Two of them – The American Film Industry: A Historical Dictionary (1986) and The Encyclopedia of Vaudeville (1994) – were named Outstanding Reference Source of the Year by the American Library Association.

More recently, It’s the Pictures That Got Small: Charles Brackett on Billy Wilder and Hollywood’s Golden Age was on The Guardian‘s list of Best Books of 2016.

Slide, whom Lillian Gish once called “our preeminent historian of the silent film,” has also directed several documentaries, including Portrait of Blanche Sweet, about the popular D.W. Griffith discovery, and Vi: Portrait of a Silent Star, about top Metro Pictures actress Viola Dana.

If that weren’t all, he has taken part in quite a few Q&As for Alt Film Guide that should be of interest to the movie buff, the film scholar, and everything in between. Here are links to nine of them:

The Curse of the Movie Buff

Shortly before its publication, the Magnificent Obsession Q&A (done via email) was inexplicably lost in both mine and Anthony Slide’s computers. Call it The Curse of the Movie Buff.

But just like in movie buff/screenwriter DeWitt Bodeen’s The Curse of the Cat People, there’s a happy ending: Tony Slide generously agreed to do the Q&A all over again, and that’s why you can find it immediately below.

For more information on Magnificent Obsession: The Outrageous History of Film Buffs, Collectors, Scholars, and Fanatics, check out the University Press of Mississippi website. 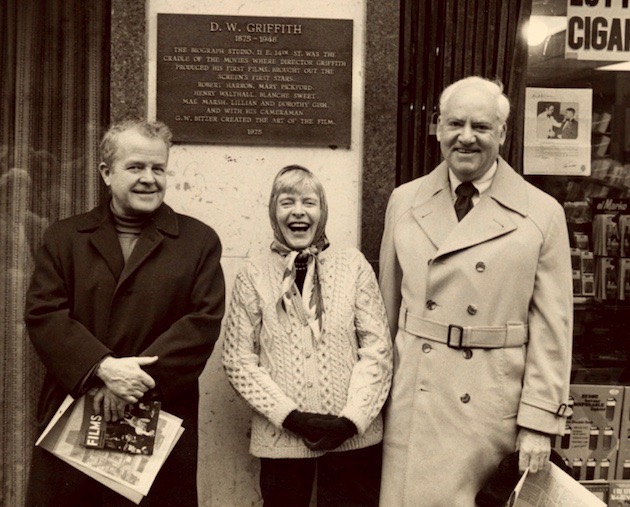 Blanche Sweet with Films in Review editor Charles Phillips Riley and National Board of Review President Robert Giroux at the 1975 unveiling of a plaque marking the site of the old American Biograph Company at 11 East Fourteenth Street in New York City. That’s where D.W. Griffith, “The Father of American Cinema,” made his directorial debut back in 1908. Griffith discovery Blanche Sweet (Judith of Bethulia, Home Sweet Home) herself paid for the plaque, with dedicatory text by Magnificent Obsession author Anthony Slide. Weeks after its unveiling, the plaque was stolen – never to be recovered.

Why not? I like to believe that all my books are original in that they deal with subjects that no other historians or scholars have tackled previously. It was in many ways a challenge to write about film buffs and their history in that not much of that history is recorded. To a certain extent, part of the book is a memoir, with my own reminiscences of film buffs that I have met, known and, quite often, liked.

I also wanted to document as much as possible the world of the film buff. So I write about the earliest film buffs; the autograph collectors and their world; the most important film buff publication, Films in Review, which managed to be both scholarly and buffish at the same time; the Silent Movie Theatre [in West Hollywood/Los Angeles]; Chaw Mank, who made a career out of running fan clubs; Joe Franklin, who similarly made a career as a radio and television personality out of his film buff background; celebrity stalking; and much more.

I even manage to titillate my audience by discussing sex and the film buff. And don’t worry, André, you didn’t make it into that chapter.

That is difficult to explain. I know one when I meet one. There is a certain similarity to be found among film buffs. Most of them are male, most of them are gay, and a large number tend to live with their mothers. Apart from that, they are often rather weird — and sometimes wonderful.

I do try and explain that the film buffs of the past, those from the 20th century, were generally decent, kind, and helpful human beings — always willing to share their knowledge and their collections (be they of paper or actual 16mm film prints) with others.

The film buffs of the 21st century are very different, defined by their use of social media, their assurance that whatever they say or think is correct, their rudeness (on the most part), and their lack of willingness to share anything unless there is money to be made.

That is really a difficult question to answer.

I do explain in the book that many fans cannot fairly be defined as buffs. Also, a lot of fans tend to grow out of their fan worship.

It is something with which they are obsessed as teenagers. Once they discover girls, boys, sex, and become adults, they tend to take on other interests in life. 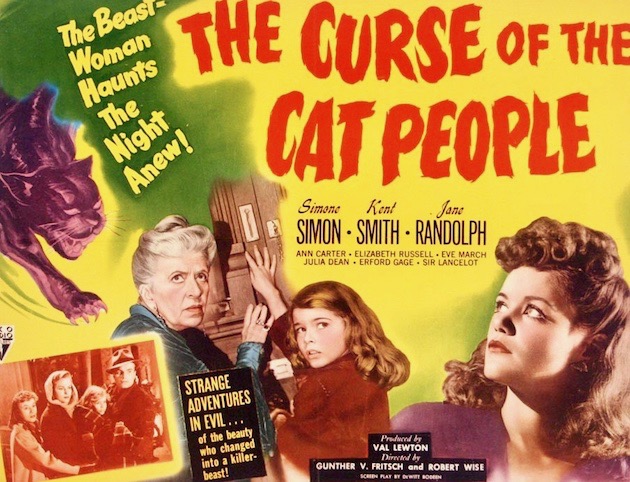 The Curse of the Cat People (1944) was written by “movie buff” and future Films in Review contributor DeWitt Bodeen, whose credits, solo or in collaboration, also include Jacques Tourneur’s original Cat People (1942); John Cromwell’s The Enchanted Cottage (1945), starring Robert Young and Dorothy McGuire; and George Stevens’ I Remember Mama (1948), toplining Irene Dunne and Barbara Bel Geddes. Simone Simon, Kent Smith, and Jane Randolph were featured in both Cat People movies; child actress Ann Carter has a key role in the sequel. If you look closely at the lobby card above, you’ll find DeWitt Bodeen’s name – in minuscule print – at the very bottom.

I don’t truly think that film scholars would regard themselves as information databases. Many would argue that they are not obsessed with facts, like the typical film buff, but rather approach film from a critical, historical, and aesthetic perspective.

I do point out that too many film academics lack the passion of a film buff. They don’t love film the way you and I love film. In the book, at least one academic, Gary Rhodes, proudly identifies himself as a film buff. And since the book has been published, another, Tony Williams, is also anxious to be identified as a film buff.

In fact, as an aside, I have been attacked by many readers because I did not include them in the text and did not identify them as film buffs. By the way, Tony Williams has an excellent and very entertaining review of the book at the Film International site. There is also a review in Sight & Sound by an academic, which, while not a negative review, typifies in my opinion how academics approach any film text outside of their range of knowledge and expertise.

The chapter “Film Buff Meets Film Scholar” is about Films in Review, praising that wonderful, and largely forgotten publication for the manner in which it could address both audiences. Brilliant career articles by the likes of DeWitt Bodeen and others. Shameful that nobody today remembers DeWitt and his pioneering work. Also, Films in Review boasted an extraordinary, eccentric editor, Henry Hart, and I am glad to record his life and career in Magnificent Obsession.

I certainly do not like to be described as a film buff. I suppose I might have been labeled one when I first became seriously interested in film.

I don’t think you can “become” a film historian just like that. It requires you to prove yourself through your writings, lectures, or whatever. Of course, William K. Everson once wrote or said that it takes thirty years for a film buff to become a film historian. But that is not what I think or believe.

The Curse of the Cat People image: RKO Pictures.

George Baker: Tiberius in I Claudius + Inspector Wexford in The Ruth...