Holywood Unknowns: A history of movie extras and bit players

In Hollywood Unknowns (University Press of Mississippi), film historian Anthony Slide delves into a rarely discussed side of Hollywood moviemaking: the aspirations and travails of those invariably nameless, usually voiceless, and oftentimes faceless contributors to the art and success of motion pictures everywhere – the movie extras and bit players (in addition to “side” chapters on stand-ins and stunt doubles). (Image: Anthony Slide’s Hollywood Unknowns: A History of Extras, Bit Players and Stand-Ins cover, with possibly MGM’s short filmmaker Pete Smith next to the dog looking for extra work.)

Hollywood Unknowns covers the history of the Hollywood extras from the early days of filmmaking – when, say, Florence Lawrence could be the star of one film and mere “atmosphere” in another – to the current crop of movie extras.

Among the topics found in Slide’s book are the history of Central Casting, which was officially created to help the extras get work (though unofficially it also worked as a studio tool); union battles involving the Screen Actors Guild, the Screen Extras Guild, and splinter groups; and a look at former silent film stars, among them Clara Kimball Young, King Baggot, and William Farnum, who ended their professional days as Hollywood extras.

So, next time you watch Michel Hazanavicius’ Oscar-winning The Artist, bear in mind that Jean Dujardin’s George Valentin was lucky he could tap dance. Many top silent film performers, especially those from the 1910s, weren’t nearly as fortunate.

Author Anthony Slide has kindly agreed to answer a few questions (via e-mail) about Hollywood Unknowns. See below.

And for more information on Hollywood Unknowns, visit the University Press of Mississippi website.

Movie extras on the set of John Cromwell’s The Prisoner of Zenda. Photo taken by former extra David Niven.

First of all, what made you decide to write a book about the history of Hollywood extras – in addition to chapters on stand-ins and stunt doubles?

I had some interest in the work of extras as a result of being hired some years ago by the Screen Actors Guild to conduct interviews with its earliest surviving members in connection with SAG’s 50th anniversary. Among these were Paul Bradley (who had been stand-in for Ronald Colman on Lost Horizon), Lila Finn (Dorothy Lamour’s stand-in in The Hurricane) and Santa Puailoa (a Polynesian who worked as an extra, sometimes performing a knife dance, in a lot of Hawaiian-set movies). I had also known well Bess Flowers, who was always described as Hollywood’s Best Dressed Extra because of the considerable quantity and quality of her wardrobe.

What served ultimately as a catalyst, I suppose, was a meeting with a 98-year-old former extra named Pauline Wagner. She’s still alive at 102. And she was so intelligent, so well-spoken and had so many fascinating stories that I was almost compelled to document her work and the work of many other extras. And by extras, I also mean to include their peers: stand-ins, doubles and “bit” players.

While reading Hollywood Unknowns, I kept wondering: How did those thousands and thousands of extras make ends meet when their daily (and yearly) wages were for decades so unbelievably low even when taking inflation into account? Why bother with what seemed like arduous, haphazard, poorly compensated work?

Most extras did not make ends meet. They had to take on other jobs between studio assignments that were often few and far between. Most of them I sincerely believe enjoyed the work and considered it a vocation. They enjoyed the camaraderie. I don’t honestly believe that many wanted to become stars or featured players. They were happy with their lot, while perhaps hoping that they might make a little more money.

Anthony Slide’s Hollywood Unknowns: A History of Extras, Bit Players and Stand-Ins, movie extras on the set of John Cromwell’s The Prisoner of Zenda images: Courtesy of Anthony Slide. 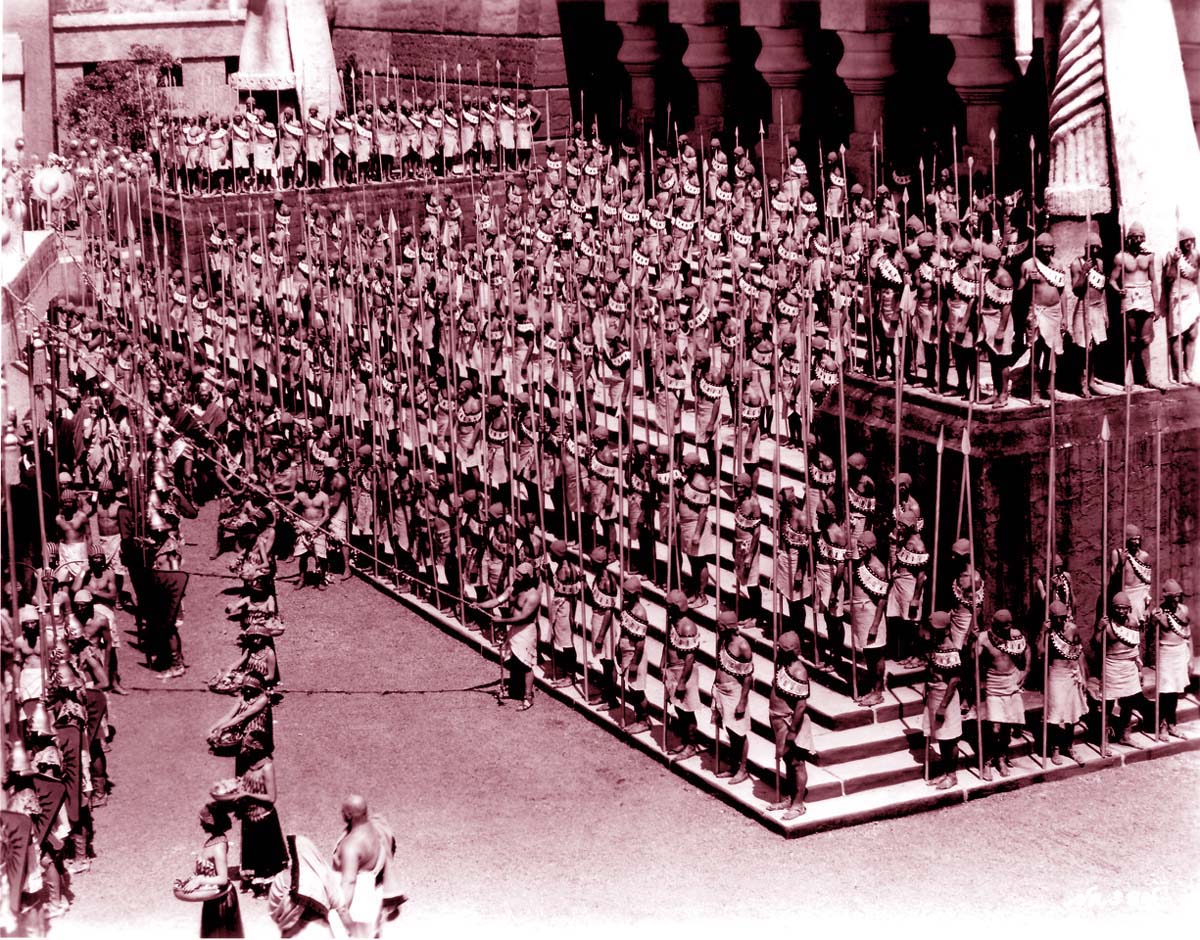 ‘Hollywood Unknowns’ makes it clear that there were several organizations ready to help out young women who came to Los Angeles to become movie extras. But what about the men? It seems like the focus was all on the women – so they could retain their virginity and the like. Even leaving aside (male) sexual harassment, weren’t male extras abused by the system as well?

Yes, the emphasis was on helping female extras. And this, in part, may have been influenced by the knowledge that some had young children. And yes, I am sure male extras were abused. Just consider how they were treated by Michael Curtiz during the making of Noah’s Ark. Stripped naked, their bodies painted with a vile-smelling brown liquid, and then sent on to a set where four million gallons of water were poured down on them without warning.

It is interesting in fact that there is never any reference to female extras being forced to work in the nude or near-nude, and yet this is relatively commonplace for male extras, who did at one point in the 1910s actually protest at this. Many male extras would live three to four to a room, even sharing their clothes. When one got a part, another would loan him a decent pair of trousers or a clean shirt. Incredibly, those who had loaned out their clothes would sit around all day waiting the return of their colleagues. And just as female extras were subjected to sexual abuse, we can be sure that some male extras faced that same problem from assistant directors or directors.

Was Central Casting truly helpful to movie extras? Or was it merely a convenient casting tool for the Hollywood studios?

Yes, Central Casting was a genuine help to extras in that they could be registered here. It meant that there was only one source necessary to check for work, and they did not have to register with and pay multiple casting agencies. At the same time, it was convenient for the studios, and, as I point out in Hollywood Unknowns, Central Casting might well be considered a company union, setting a standard wage for all extras.

Silent extras who graduated to stardom or at least to being featured players did so in large part thanks to luck. Occasionally, they got help from an assistant director or happened to be spotted by a director. It was only after they had moved on to a higher position that they had to prove they had talent.

You mention Mae Clarke in ‘Hollywood Unknowns.’ She was featured in dozens of movies of the ’30s, including ‘Frankenstein’ (as Dr. Frankenstein’s bride), ‘Waterloo Bridge’ (in the Vivien Leigh role), and ‘The Public Enemy’ (getting a grapefruit smashed on her face). How come she became an extra / bit player a mere twenty years after those movies were released, especially at a time when many oldtimers were making comebacks on television?

Throughout her career Mae Clarke suffered from mental illness. I knew her in later years and, believe me, she could be difficult. But that was because of an illness over which she had little or no control. I believe she took regular doses of lithium. That mental illness hurt her career as a leading lady and meant she suffered a slow decline to the ranks of the extras.

By the way, don’t forget she was not quite as famous as one might imagine. Everyone remembers the grapefruit in the face that James Cagney gives her in The Public Enemy, but how many are aware that her name does not appear in the on-screen credits for the film, so minor was she considered by Warner Bros.

In your book, you also discuss a number of silent film stars who became movie extras following the Wall Street Crash and the coming of sound. That’s kind of having someone like Paul Rudd or Kate Beckinsale or Will Ferrell reduced to the status of extras in 2022. Why couldn’t those silent era veterans find work at the very least as supporting players?

Being in silent films meant that you were regarded as a silent star. It didn’t matter that you could speak well or might have had some earlier stage experience. For most, once a silent player always a silent player. And Paul Rudd and Kate Beckinsale will never have to work as extras because they have substantial, guaranteed SAG retirement benefits, based on their current earnings, and those benefits were not available to silent players in pre-SAG days.

Besides Mae Clarke, what about stars or top featured players in talking pictures who ended up as movie extras?

There were many silent stars who ended up as extras – I have a chapter on them in my book. There were very few leading players from the later era, like Mae Clarke, who became extras.

What was it like for the ‘has-beens’ to go from leading roles to working as extras and/or bit players?

It must have been demeaning, but the money was there. And, luckily, at least two studios, MGM and Warner Bros., had a policy of putting former silent players under contract as extras because the studios knew they would be reliable and know how to handle themselves on a set.

Any oldtimers working as movie extras in new today’s movies? Is that sort of downward mobility less common in modern Hollywood?

I am not aware of any oldtimers working as extras today. Times have changed. People are more careful with money and saving it. And there are more benefits available.

Why was James Cagney (and others like him) so intent on keeping movie extras under the thumb of the Screen Actors Guild when, according to ‘Hollywood Unknowns,’ SAG itself was drastically cutting down on the number of extras within its ranks?

SAG and James Cagney wanted extras as members to swell their ranks and add to the power of the Guild. They just didn’t want extras voting and overwhelming those whom they perceived as “real” actors and actresses.

In your book’s last chapter, you write: ‘The truth is that the extras of more recent vintage are not very interesting…’ What has changed?

I don’t think the extras today have the same romantic appeal. The stories are not there. You are not going to see a Mae Marsh [The Birth of a Nation, Intolerance] or a Mae Clarke in their ranks. They are just ordinary people who probably don’t really need the money, but think it is a lark to be an extra. Not to mention getting at least one free meal. I know that is somewhat of an oversimplification, but there is some truth to it.

And finally, though not directly pertinent to ‘Hollywood Unknowns,’ what’s your view on stunt workers asking for Academy Award recognition?

I had not thought about this. But I don’t think that stunt workers should have Academy Award recognition. I am not convinced they contribute enough to an individual film. Also, with so many stunts actually being created digitally rather than performed by a stunt man or woman, could Academy members be trusted to understand what was a real, man-made stunt and what was something created by the visual-effects department?

Lauren Bacall Movies: To Have and Have Not + The Big Sleep