‘Movies’: Is That an ‘Abhorrent’ Word That Denigrates the Art Form? 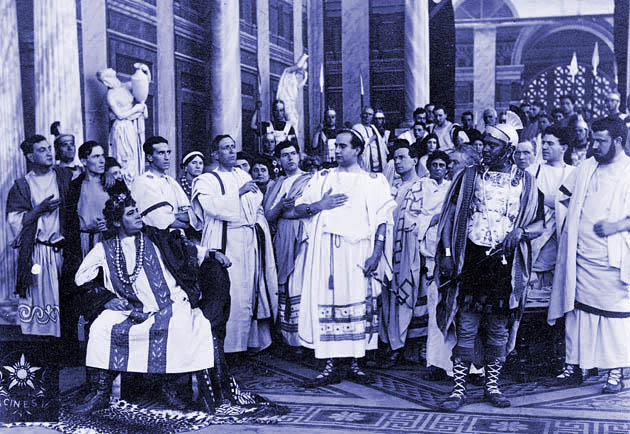 “Movies” or…? Quo Vadis: One of the first feature films ever made, Enrico Guazzoni’s Italian epic came out in 1913, going on to become a global sensation. Should American “moving picture” fans of the early 1910s have referred to it as a “photoplay” or a “movie”?
Contents hide
1. Silent bites: The birth of ‘the movies’
1.1. Film industry thumbs its nose at ‘the movies’
1.2. ‘Horrible word’
1.3. ‘Mutual Movies Make Time Fly’
1.4. Iris Barry & the ‘photoplay’

Silent bites: The birth of ‘the movies’

In 1926, in her native England, Iris Barry published what is generally considered the first serious historical study of the motion picture as an art form. Utilizing the British slang term, she chose to title it Let’s Go to the Pictures. Later that same year, when the book was published in the United States, the title was changed to Let’s Go to the Movies, in recognition of what had become the most familiar form by which the motion picture was known – and would continue to be known.[1]

The history of the term “movies” is a fascinating one, dating back to the early years of the 20th century. Today, its usage is common place, and yet it was once abhorred by the industry itself as undignified and vulgar.

“Movies,” obviously an abbreviation of “moving pictures,” probably has its origin in the language of New York’s Bowery circa 1906 or 1907; social workers were the first to use the term in a formal manner in written reports. Even if the audience member was seeing only one film, he or she would refer to it as “the movies” and only seldom as “a movie” – the plural form was used to refer to a singular object.

Film industry thumbs its nose at ‘the movies’

Rather than embrace “the movies,” the film industry rejected the expression. “There are scenes in the picture theatre that move you to laughter or tears, and there is the man-who-eats-onions who moves you to another seat. You move, perhaps, but you and the theatre should not be classed as ‘movies.’ ‘Movies’ is a misnomer for the Moving Picture Theatre,” fulminated a writer in the Sept. 7, 1912, issue of Motion Picture News.

Criminals would use the motion picture as an excuse for their actions, and would refer to it as the “movies.” An unhinged individual in Cleveland who set fire to a school building in August 1912 claimed that he was driven to it after viewing a motion picture of Dante’s Inferno – but he called it not a motion picture, but a “movie.”

“Alas the poor movie! It seems to be its unhappy fate to be blamed for all the untoward events that happen,” commented Motion Picture News that same month.

“The word is pointless, and stupid, and has the effect, we believe, on many minds of derogating the motion picture, which is a beautiful scientific and artistic product. … They say if you give a dog a bad name he will hang himself, and so with the picture. ‘Movies,’ ‘flickers’ and all those thoughtless words do not help the business. We would like to see the disuse of the horrible word ‘movies,’ before it harms the business.”

Industry outrage continued into 1913. Critic Epes Winthrop Sargent wrote an editorial aimed at exhibitors in the Nov. 29, 1913, issue of The Moving Picture World, pointing out that:

“Like most current slang, [the use of the word ‘movies’] has been widely accepted, but it is not in any sense a word that will advance the cause of [the] photoplay.[2] It is all right to argue that a nickname helps to popularize, but it should be the right sort of nickname and to take the coining of the streets and the children’s playground is not going to give emphasis to the fact that the photoplay is not the cheap and nasty thing it was. Educate your clients to use the more dignified ‘Photoplay.’ … The popular expression is a curse to the pictures and confirms the fanatic in his belief that the motion pictures are still the cheap rot that he saw back in ’98.”

“Movies” or “Film” or “Photoplay” or “Moving Picture”? Mae Marsh looks unsure, but by the time D.W. Griffith’s The Birth of a Nation came out in 1915 the word “movies” had become the widely accepted – colloquial – label for the late 19th century invention. The words “film,” “cinema,” and “motion picture” would remain in use, but generally within the more rarefied realms relating to the art form – e.g., “The films of Michelangelo Antonioni and Ingmar Bergman,” “A study of African cinema,” and the Academy of Motion Picture Arts and Sciences.

But the industry itself became conflicted, not least because the Mutual Film Corporation, founded in 1912 as a major distributor, selected as its slogan, “Mutual Movies Make Time Fly.” It was a good advertising catchphrase, and the folks at Mutual knew it.

By 1915, the fight was over. In April of that year, Motion Picture Magazine pointed out that while “movies” did not well represent the value and educational importance of the motion picture, it was firmly rooted in the hearts and minds not only of the moviegoing public but also the nation’s newspapers:

“What endearing term is suggested to supplant the word ‘movies’? Until a better word comes along, the newspapers of this country and the lovers of the screen will continue to use the ‘movie’ expression.”

Through the years, the motion picture has been defined by other sobriquets – “flickers,” “flicks,” “pix” – but ultimately it is and remains the movies.[3]

[1] The British edition was published by Chatto & Windus; the American edition by Payson & Clarke. Both editions were printed in the U.K.

Iris Barry (1895–1969) was a colorful character, who early in life had affairs with Ezra Pound and Wyndham Lewis. In 1935, she founded the film department of New York City’s Museum of Modern Art.

[2] The word “photoplay” – to describe the motion picture – was first used by the Essanay Company in the fall of 1910.

The following year, Photoplay became the title one of the first American film magazines, which was to remain in circulation until 1980.

[3] There have also been slang terms for specific types of films, all easily identifiable, such as “cliff-hanger,” “weepie,” “indie,” “nudie,” and “epic.”