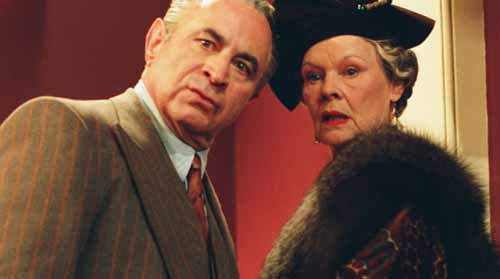 Directed by Stephen Frears from a screenplay by Martin Sherman, Mrs Henderson Presents is an unabashedly old-fashioned star vehicle for Judi Dench, even if in a role made to order for Maggie Smith. Once one gets past the fact that it’s Dame Judi instead of Dame Maggie up on screen, Mrs Henderson Presents actually becomes – at least moderately – enjoyable in a fluffy, fluttery kind of way.

As the Mrs. of the title, Dench is an eccentric, self-centered rich widow who decides she wants to renovate London’s decrepit Windmill Theatre, turning it into an art nude revue during World War II. Bob Hoskins plays the theater’s director and Mrs. Henderson’s ambivalent antagonist. Although Dench and Hoskins don’t have quite the same chemistry as, say, Katharine Hepburn and Humphrey Bogart in The African Queen, the two play off of each other with ease.

True enough, Mrs Henderson Presents is no masterpiece and its charms feel more than a little coy at times, but overall the film is a pleasant bit of risqué nostalgia.

It’s also infinitely more diverting than the dreary 1945 Rita Hayworth-Janet Blair vehicle Tonight and Every Night, which is set in a fictional – and more prudish – version of the Windmill.

And a few wobbly bits!