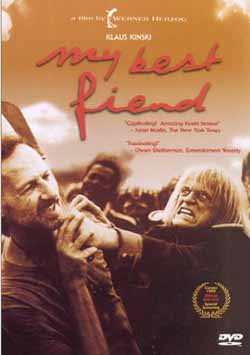 Werner Herzog’s documentary, Klaus Kinski: My Best Fiend / Mein liebster Feind - Klaus Kinski (1999), is yet another in the dazzling array of Herzog documentary – or documentary-like – films. This one follows the director’s turbulent friendship and creative partnership with the legendary German actor Klaus Kinski, with Herzog also acting as narrator (in German with English subtitles, or dubbed into English). In the 1970s and 1980s, the pair collaborated on five great films: Aguirre, der Zorn Gottes / Aguirre: The Wrath of God(1972), Nosferatu: Phantom der Nacht / Nosferatu: Phantom of the Night (1979), Woyzeck (1979), Fitzcarraldo (1982), and Cobra Verde (1987).

In a sense, Klaus Kinski: My Best Fiend is pure hagiography, only in wink-and-a-nod reverse, as Herzog proudly cements Kinski’s reputation as the madman of twentieth-century film. In the hands of any other director, that’s all this film would be, but in Herzog’s capable hands My Best Fiend is turned into a memorable experience.

It opens with riveting scenes of Kinski performing as Jesus Christ in a one-man show. The actor verbally abuses his audience – who boo and hiss – telling the crowd of Christians to shut the fuck up while explaining that Christ wasn’t tolerant but rather would whip them in their ugly faces. This is hardly serious art. Instead, it feels like professional wrestling, or like the audience-abusing raps that Andy Kaufman used to hurl at his viewers.

From then on, Herzog retraces his steps to places around the world where his Kinski films were shot. The director provides many insights and anecdotes, including the infamous claim that through the end of Aguirre he directed Kinski at the end of a shotgun. Herzog also claims that local tribal leaders offered to kill Kinski for him, for they feared the director’s silence more than they feared Kinski’s rages. Herzog claims he said, “I needed Kinski for a few more shots, so I turned them down. I have always regretted that I lost that opportunity.” Of course, this is pure bunkum, but it gets people talking and it sells tickets – and Herzog knows it.

In another anecdote, Herzog muses on getting ripped in Kinski’s autobiography. He says it was all pure theater, adding that he helped Kinski think of some of the epithets for the actor to call his director. This is no shock, as anything less than pure adulation was taken as an insult. When a critic described his performance in a local theater as “excellent,” Kinski sneered: “I was not excellent! I was not extraordinary! I was monumental! I was epochal!” This behavior was known to Herzog early on, for when he was thirteen he lived in the same boardinghouse as Kinski, who acted like an unappreciative prima donna even then.

Yet, Kinski also had a lighter, more humane side. We see that in some rare footage of the actor alongside Herzog at the Telluride Film Festival in the early 1990s. The film even ends with an amazing sequence of Kinski, during the shooting of Fitzcarraldo, holding court with a Monarch butterfly that seems to be obsessed with him. Also, former female co-stars Eva Mattes (Woyzeck) and Claudia Cardinale (Fitzcarraldo) only have good things to say of Kinski and his treatment of them.

Herzog wisely mines the insipid – and downright silly – notion of artists going mad. The swinish public, whom Kinski calls “scum,” needs to believe bad things about celebrities. Of course, Herzog feeds into this, spinning tales of dubious things Kinski did: attacking extras, cursing at small-time production assistants, etc. Yet, one senses from the beginning that Herzog is merely embellishing his and Kinski’s legends for the purposes of art, and intentionally blurring reality as he does in many of his other “documentaries” such as Lessons of Darkness and Fata Morgana.

Herzog and Kinski learned that one must eviscerate stereotypes by using them until they turn into dust. Among Herzog’s embellishments of Kinski’s persona is his description of a story about an Indian who, after being bitten by a snake while filming Aguirre chainsawed off his foot to prevent death by poison. This supposed attempt to deflect attention from Kinski and his “genius” reputedly caused the actor to rage against the snake-bitten man. Again, pure bunkum, for the loss of blood from a sawn-off foot would more quickly kill a man than any snakebite.

Additionally, My Best Fiend offers other unexpected moments of pleasure, including bizarre outtakes from an alleged earlier version of Fitzcarraldo, starring Jason Robards in the title role, and a goofy Mick Jagger as his even odder sidekick. Whether or not this is true footage, or if it was merely done as a gag, is left to the viewer’s imagination. (It’s hard to imagine that Herzog would have ever wanted to make such a film.)

Kinski, at the age of sixty-five, died in Marin County, Calif., in 1991, just four years after his last collaboration with Herzog on Cobra Verde. For better or for worse, Herzog seems to have never gotten over it. The whole film, despite its mockery and offbeat tone, is a most loving tribute from one artist to another – even as Herzog claims, “Every gray hair on my head I call Kinski.”

The two artists seemed to bring out the best in each other. Kinski’s career long predated Herzog’s, and included small roles in epics like Doctor Zhivago, but hardly anyone today recalls a single role of Kinski’s outside the Herzog milieu. That alone sums up why this documentary is a must see for Herzog fans, and for fans of cinema.