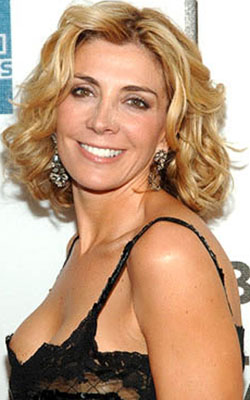 Tony-winning actress Natasha Richardson, Liam Neeson’s wife and daughter of Vanessa Redgrave and the late Tony Richardson, was taken off life support earlier today after being declared brain dead following a head injury while skiing at the luxury resort of Mont Tremblant in Canada two days ago. She was 45.

Natasha Richardson was born in London on May 11, 1963, into a prestigious show business family.

Mother Vanessa Redgrave was a stage performer who would find film stardom three years later with two back-to-back hits, Michelangelo Antonioni’s Blow-Up and Karel Reisz’s Morgan, for which she received her first of six Academy Award nominations (including one win in the supporting category for Julia in 1977). Father Tony Richardson had his biggest screen hit, Tom Jones, the year Natasha was born. The period romp starring Albert Finney and Susannah York went on to win 4 Oscars, including best picture and best director. (Richardson died of AIDS in 1991. Natasha Richardson would later serve on the American Foundation of AIDS Research [amfAR] board of trustees.)

Natasha’s grandparents on her mother’s side were actors Rachel Kempson, a stage performer who had a minor (but long-lasting) film career, and Michael Redgrave, renowned both onstage and on-screen – he received an Oscar nomination for the 1947 adaptation of Eugene O’Neill’s Mourning Becomes Electra – and who is probably best remembered for Alfred Hitchcock’s The Lady Vanishes (1938) and for playing the mad ventriloquist in the classic horror drama Dead of Night (1945).

Her great-grandfather was Roy Redgrave, who appeared on the British stage and in several silent films in the 1910s.

Natasha’s aunt Lynn Redgrave received Oscar nominations for Georgy Girl (1966) and Gods and Monsters (1998), while uncle Corin Redgrave is a stage star who has also appeared in more than 60 film and television productions. Younger sister Joely Richardson, best known for the TV series Nip/Tuck, has acted in about 30 films, including Sister My Sister (1994) and 101 Dalmatians (1996).

Despite her more than thirty film appearances – among them leads in Paul Schrader’s Patty Hearst (1988) and The Comfort of Strangers (1990), Volker Schlöndorff’s The Handmaid’s Tale (1990), and the Disney comedy The Parent Trap (1998) – Natasha Richardson found her biggest successes onstage. As Charles McNulty writes in an appreciation the Los Angeles Times, having been born in what is one of the most prestigious acting families in the world didn’t prevent the actress from going after unexpected acting challenges.

“She was forever tackling roles that made you second-guess your typecasting of her,” McNulty remarks. “’Oh, come on, you can’t do that,’ were words that I often found myself silently repeating after hearing reports of her upcoming stage plans, and time and again she proved me stupendously wrong.”

Among those are the title role in the Anna Christie, Blanche DuBois in A Streetcar Named Desire, and Sally Bowles in a 1998 Cabaret revival directed by Sam Mendes, for which she received a Tony for best actress in a musical.

Curiously, I’m unfamiliar with Richardson’s screen work. I’ve only seen one of her films: Widow’s Peak (1994), a minor but likable mystery thriller directed by John Irvin, and in which she co-starred with Mia Farrow and Joan Plowright. For her performance as a mysterious woman who arrives at small Irish town Richardson was voted best actress at the Karlovy Vary Film Festival.

Among her more recent screen appearances are those in Ethan Hawke’s Chelsea Walls (2001); Wayne Wang’s Maid in Manhattan (above, 2002), opposite Ralph Fiennes and Jennifer Lopez; and Asylum (2005), in which she plays a woman who falls for a dangerous mental patient (Marton Csokas), a role that earned her British Independent Film and Evening Standard British Film best actress awards.

“One of the reasons I related to [her Asylum character] Stella, and why I think a lot of women relate to her,” she said in a 2006 interview with London’s Evening Standard, “is that we’ve all had moments in life when you look at the edge of the abyss and think, ‘Am I going to throw caution to the wind?’ Most of us decide to pull in the reins. Stella doesn’t.”

In 1994, Richardson married Liam Neeson, with whom she had starred in Anna Christie the year before. The couple had two sons. She had been previously married to producer Robert Fox (1990-1993), brother of actors James Fox and Edward Fox, and among whose credits include The Hours (2002) and Notes on a Scandal (2006).

According to the Los Angeles Times obit, just before the skiing accident Richardson was considering to appear in a Broadway revival of Stephen Sondheim’s A Little Night Music with her mother.

The Thief and the Cobbler: Academy Premiere of Animated Modern Classic Original Version