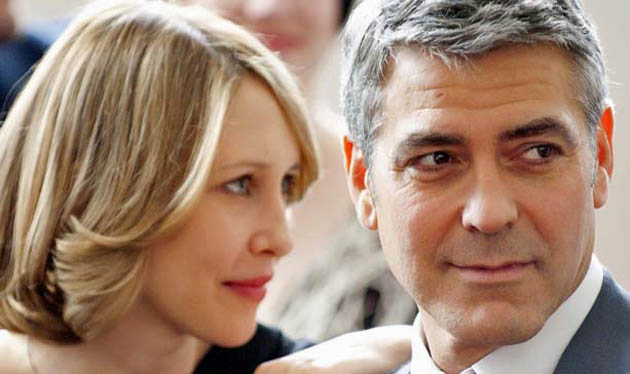 Up in the Air with George Clooney and Vera Farmiga. As the United States remains mired in one of its worst economic crises ever, the National Board of Review (NBR) has selected Jason Reitman’s Up in the Air – the story of a frequent-flying, company-downsizing expert – as the year’s Best Picture. Also: Best Actor for George Clooney (tied with Morgan Freeman in Invictus), Best Supporting Actress for Twilight and New Moon actress Anna Kendrick, and Best Adapted Screenplay (Reitman & Sheldon Turner). As Clooney’s fellow frequent flyer, Vera Farmiga didn’t win anything, but she’s a likely Best Supporting Actress Oscar contender.
Contents hide
1. NBR winners: ‘Up in the Air’ soars to the top while ‘Precious’ goes mostly unappreciated
1.1. ‘Invictus’: NBR once again honors fave Clint Eastwood
1.2. Recent Clint Eastwood wins
1.3. More National Board of Review winners: ‘A Prophet’ & Carey Mulligan
1.4. Meryl Streep not so snubbed
1.5. Out of the NBR
1.6. NBR Awards vs. the Oscars
1.7. 2009 National Board of Review Awards
1.8. Carey Mulligan & ‘Up in the Air’ & George Clooney back on top: Washington D.C. Film Critics
1.9. Notable Gabourey Sidibe win & ‘Sin Nombre’ surprise
1.10. Washington D.C. Film Critics: Winners and nominations

NBR winners: ‘Up in the Air’ soars to the top while ‘Precious’ goes mostly unappreciated

The fact that on Dec. 3 Jason Reitman’s audience-friendly, socially conscious comedy-drama Up in the Air was named Best Picture of 2009 by the National Board of Review (NBR) should come as no surprise.

On the other hand, the fact that Lee Daniels’ socially conscious drama Precious earned only one mention – Breakthrough Performance by an Actress for Gabourey Sidibe, who plays the film’s abused, pregnant, illiterate teenager – was a major upset.

One of the best-received movies of the year, Precious was nowhere to be found among either the year’s Top Ten Best Films (or rather, Best Runner-Up Films) or Top Ten Best Independent Films. And instead of Mo’Nique, the NBR picked Up in the Air performer Anna Kendrick as Best Supporting Actress.

Indeed, Up in the Air turned out to be the NBR’s top winner: in addition to its Best Picture and Anna Kendrick victories, Jason Reitman’s film earned mentions for Best Actor George Clooney (tied with Morgan Freeman for Invictus) and Best Adapted Screenplay (Reitman & Sheldon Turner).

In addition to Morgan Freeman’s co-win for his portrayal of Nelson Mandela, NBR favorite Clint Eastwood (see further below) was named Best Director while the film itself received an NBR Freedom of Expression mention – along with two highly political documentaries: Anders Østergaard’s Burma VJ: Reporting from a Closed Country, and Judith Ehrlich and Rick Goldsmith’s The Most Dangerous Man in America: Daniel Ellsberg and the Pentagon Papers.

Now, why exactly Invictus merited a Freedom of Expression award is a puzzling question. Here’s wondering whether NBR voting members can answer it in logical fashion.

As for Clint Eastwood, although this is the first time he has won the NBR’s Best Director award, he and his films have been frequently honored in the recent past.

Mystic River (2003) and Letters from Iwo Jima (2006) were named Best Picture, while Eastwood himself was chosen Best Actor last year for his own Gran Torino (which also earned Nick Schenck the Best Original Screenplay award). And back in 2004, Eastwood took home a Special Achievement Award for producing, directing, acting in, and composing the score of Million Dollar Baby.

All this after he was given a Career Achievement Award in 1999.

Curiously, Eastwood’s Oscar-winning 1992 Western Unforgiven – not exactly a socially conscious movie – didn’t win any NBR awards. The closest it got to that was being listed as one of the year’s Top Ten films.

More National Board of Review winners: ‘A Prophet’ & Carey Mulligan

Among the other NBR 2009 winners was Best Foreign Language Film A Prophet / Un Prophète, Jacques Audiard’s tough prison drama starring Tahar Rahim, and a likely Oscar candidate in that category.

Louie Psihoyos’ The Cove, about the abuse of dolphins and their vicious slaughter at a Japanese fishing village, was named Best Documentary, while Pete Docter’s blockbuster Up was the Best Animated Feature.

The NBR’s Best Actress winner was Carey Mulligan, who plays a 1960s London teenager about to lose her virginity with the help of a man more than twice her age (Peter Sarsgaard) in Lone Scherfig’s An Education. Mulligan will probably both win a bunch of critics’ prizes in the coming weeks, and land Golden Globe and Oscar nominations when the times comes. 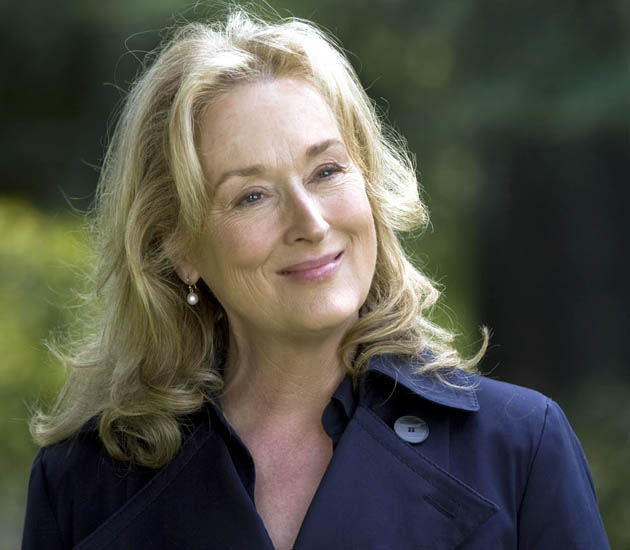 It’s Complicated with Meryl Streep. The National Board of Review (NBR) has all but ignored Meryl Streep and her Nora Ephron-directed (co-)star vehicle Julie & Julia (with Amy Adams as the first half of the title). Yet Streep is, albeit without being singled out, an NBR winner, as she’s at the very center of Nancy Meyers’ adult-oriented ensemble comedy It’s Complicated, the NBR’s Best Ensemble pick. At the box office, it has been a banner year for the two-time Academy Award winner (Best Supporting Actress for Kramer vs. Kramer, 1979; Best Actress for Sophie’s Choice, 1982) and shoo-in 2010 Best Actress Oscar contender (for Julie & Julia).

Meryl Streep not so snubbed

Woody Harrelson topping the Best Supporting Actor category for Oren Moverman’s The Messenger is less likely to lead to an Oscar nod – unless critics’ groups help raise his profile by sending him lots of love in the next few weeks. But then again, the supporting actor field is hardly what one would call crowded. So perhaps Harrelson has a good chance after all.

Kathryn Bigelow’s Gotham Award winner The Hurt Locker was mentioned twice: it was named one of the year’s Top Ten Films and Jeremy Renner was the Breakthrough Performance by an Actor honoree.

Out of the NBR

Among the high-profile films totally ignored by the National Board of Review were the following:

Also, curiously (500) Days of Summer, The Hurt Locker, and The Messenger were included on the NBR’s Top Ten (runner-up films) list, but not on the Top Ten Independent Films list. Apparently NBR voters wanted to name as many movies as possible.

NBR Awards vs. the Oscars

In the last decade, nine of the NBR’s Best Picture winners have gone on to receive an Academy Award nomination in that category; of these, three won Oscars: Sam Mendes’ American Beauty (1999), Joel and Ethan Coen’s No Country for Old Men (2007), and Danny Boyle’s Slumdog Millionaire (2008).

The one NBR Best Picture winner that failed to land an equivalent Oscar nomination was Philip Kaufman’s Quills back in 2000.

Cruz was the only one who ended up taking home the Oscar, whereas Clint Eastwood’s rifle-toting, soft-at-heart Gran Torino would-be bigot turned out to be the lone NBR winner bypassed by the Academy’s Actors Branch. (In truth, Eastwood surely got tons of votes, but not enough – or not enough in the first and second slots – to land a nomination).

According to its website, the NBR voting membership consists of “a selective group of knowledgeable film enthusiasts, academics, film professionals, and students.”

2009 National Board of Review Awards

Best Film: Up in the Air.

Ten Best Films (in alphabetical order):
An Education.
(500) Days of Summer.
The Hurt Locker.
Inglourious Basterds.
Invictus.
The Messenger.
A Serious Man.
Star Trek.
Up.
Where the Wild Things Are.

Best Supporting Actress: Anna Kendrick, Up in the Air.

Breakthrough Performance by an Actor: Jeremy Renner, The Hurt Locker.

NBR Freedom of Expression:
Burma VJ: Reporting from a Closed Country.
Invictus.
The Most Dangerous Man in America: Daniel Ellsberg and the Pentagon Papers.

Carey Mulligan in An Education: Following her three back-to-back Best Actress wins – courtesy of the British Independent Film Awards, the National Board of Review (NBR), and the Washington D.C. Film Critics – the 24-year-old Westminster-born Carey Mulligan is already a front-runner for a) more year-end movie awards in the U.S. and the U.K. b) the 2010 Academy Awards and BAFTAs. In Lone Scherfig’s early 1960s-set British drama An Education, Mulligan plays an adolescent who begins an “educational” relationship with a man (Peter Sarsgaard) about twice her age. About a Boy author Nick Hornby wrote the screenplay, based on Lynn Barber’s memoirs.

Carey Mulligan & ‘Up in the Air’ & George Clooney back on top: Washington D.C. Film Critics

An Education lead Carey Mulligan has won her third Best Actress mention this awards season, this time courtesy of the Washington DC Area Film Critics Association. Mulligan has been previously singled out by the British Independent Film Awards and, as seen above, the National Board of Review. (See further below the full list of Washington DC Film Critics winners and nominations.)

For the record, besides Carey Mulligan and Peter Sarsgaard as her romantic/sexual interest, An Education also features the following:

Jason Reitman’s Up in the Air, about a tin-hearted, corporate-downsizing expert who rediscovers his humanity, was voted Best Film of 2009; star George Clooney was the Best Actor. Both had already won in their respective categories at the National Board of Review Awards. (Clooney tying with Morgan Freeman for Invictus.)

But Kathryn Bigelow – not Jason Reitman – was the Best Director for The Hurt Locker, which recently received Best Picture and Best Ensemble honors at the Gotham Awards.

All but one of the Washington DC Film Critics’ picks were expected – or at least not unexpected. The one big surprise was the Best Foreign Language Film winner, Cary Fukunaga’s feature film debut Sin Nombre (lit. “Without a Name”), a Spanish-language Mexico-U.S. co-production about Mexican gangs and Honduran would-be immigrants.

Curiously, the Washington DC Film Critics give out an award for Best Art Direction – this year’s winner was Nine – but not for, say, Best Cinematography or Best Film Editing, two categories more frequently listed by award-giving critics groups.

Best Film
The Hurt Locker.
Inglourious Basterds.
Precious.
Up.
* Up in the Air.

Best Ensemble
* The Hurt Locker.
Nine.
Precious.
Star Trek.
Up in the Air.

Best Adapted Screenplay
The Blind Side.
An Education.
Precious.
The Road.
* Up in the Air.