Tom Cruise tells Anthony Edwards: “I feel the need … The need for speed.” High five. Whether you find that hip and cool, or if you feel the need to roll your eyes in disgust, thus begins the 2D trailer for the IMAX 3D rerelease of Tony Scott’s Top Gun, the bombastic 1986 action flick that solidified Cruise’s superstardom; enhanced Scott’s reputation as a master of slick and shallow filmmaking; and inspired loads of male teenagers with personality issues to join the air force of their respective countries so they could fulfill their need for aping Tom Cruise. (Please scroll down to check out the Top Gun 3D IMAX trailer.) The North American Top Gun 3D rerelease will last only six days, Feb. 8-13.

Written by Jim Cash and Jack Epps Jr., Top Gun features Tom Cruise as trainee pilot Maverick, a cocky, obnoxious jerk who can neither sing nor act, but who becomes a hero once he learns to Follow the Rules. Needless to say, Maverick also gets to win the girl, played by the talented Kelly McGillis, whose once-promising film career went downhill in the ’90s. McGillis has mostly stayed away from the limelight in the last couple of decades, though she resurfaced a couple of years ago, when she publicly came out as a lesbian. (Regarding Tom Cruise’s acting, let me add that Cruise has become an infinitely more effective performer in recent years.)

Back in the mid-’80s, Top Gun grossed $353.8 million worldwide (about $750 million today). In late 2010, there were talks of a Top Gun sequel possibly to be directed by Tony Scott and in which Tom Cruise would have a cameo as a middle-aged Maverick. Scott, who reportedly supervised (at least some of) Top Gun‘s conversion to 3D, killed himself in August 2012.

According to reports, Top Gun co-producer Jerry Bruckheimer “still has hopes” that a sequel will get made. Just don’t hold your breath.

Top Gun will be available in a new 3D/2D Blu-ray set on February 19. Once again, check out Tom Cruise and lots of fighter jets in the Top Gun 3D IMAX trailer below.

The Hobbit movie adaptation (see clip below) is one of the most anticipated releases of 2012 (as The Hobbit: An Unexpected Journey) – and 2013 (as The Hobbit: The Desolation of Smaug) and 2014 (as The Hobbit: There and Back Again), and who knows, maybe 2015 and 2016 and 2017 as well, in case Peter Jackson and Warner Bros. decide to expand J.R.R. Tolkien’s The Lord of the Rings prequel a little (or a lot) further, or do a little rebooting here and there. In fact, we (or at least some of us) could theoretically be watching The Hobbit movies all the way to 2,065 or whereabouts. (Image: Ian McKellen Gandalf The Hobbit movies.)

Anyhow, The Hobbit: An Unexpected Journey gets philosophical in the clip below, as Ian McKellen’s Gandalf hands a sword to a somewhat reluctant Martin Freeman’s Bilbo Baggins. “The blade is of elvish make,” Gandalf explains, “which means it’ll glow blue when orks or goblins are nearby.” Gandalf then lectures: “True courage is about knowing not when to take a life, but when to spare one.”

Whether that line will give you goosebumps or make you sick to the stomach depends on what you consider great and profound vs. sappy and phony writing. (Commander of the Order of the British Empire and Knight Ian McKellen courageously delivers that line as if he believes every word.) I should point out that Academy members (and most movie critics) tend to find such lines all but unbearably moving and of a depth to make Nietzsche and Kant look like amateurs. My point: Barring a total critical and box office misfire, expect The Hobbit: An Unexpected Journey to get tons of Oscar nominations, including Best Picture.

I should add that the sword given to Bilbo also plays an important role in the Lord of the Rings trilogy. And, I’m pretty sure, it’ll play an important role in The Hobbit merchandising as well, as according to reports Warner Bros.’ Consumer Products division and US-based toy company The Bridge Direct will be launching a toy line featuring The Hobbit weapons for kids. It’s unclear whether or not those will also glow blue when bullies and other human fiends are nearby. 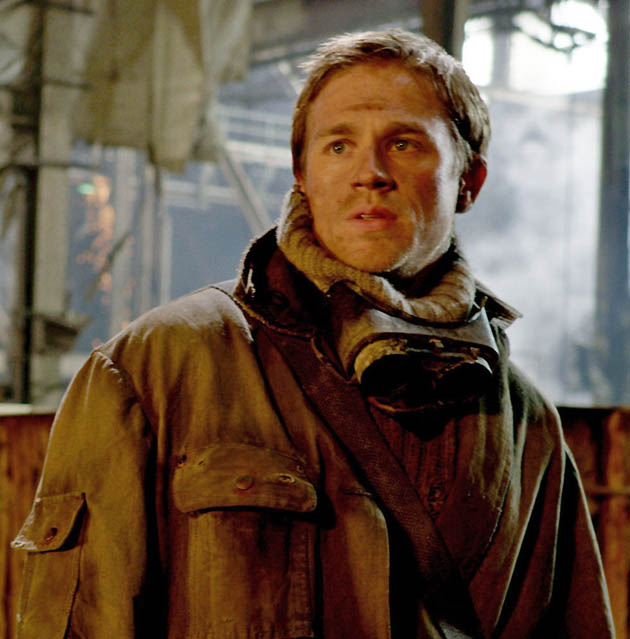 Pacific Rim, the upcoming Transformers meets Mothra movie Guillermo del Toro will be bringing to you – in 3D – next July 12 (if you live in the United States or Canada), has had a recent test screening (Feb. 2013). Reactions to the special-effects-laden tale about the Great Battle between aliens vs. (human-piloted) robots, have been “overwhelmingly positive” – or so I’ve read.

Well, yes, if “overwhelming” means a handful of enthusiastic tweets including one by Looper director Rian Johnson, this year’s DGA Award winner for the television series Breaking Bad. Johnson (not so subtly) warned his followers not to forget their diapers before they go check out Guillermo del Toro’s latest:

Go into Pacific Rim prepared to be transmogrified into a 12 year old. And then to pee your pants with joy. I love it so much.

Written by Guillermo del Toro and Clash of the Titans’ Travis Beacham, Pacific Rim stars Charlie Hunnam in the type of role that would have gone to Tom Cruise two decades ago.

According to the IMDb, Pacific Rim opens in a couple of dozen countries on July 11-12, ’13. These include the aforementioned U.S. and Canada, in addition to Argentina, Australia, Russia, Spain, the U.K., Chile, and New Zealand.

Later in July, Guillermo del Toro’s action/horror flick will open in The Netherlands, France, Germany, and several other European territories.

Curiously,it opens in Brazil only on Aug. 9, while Japan has an unspecified July release. 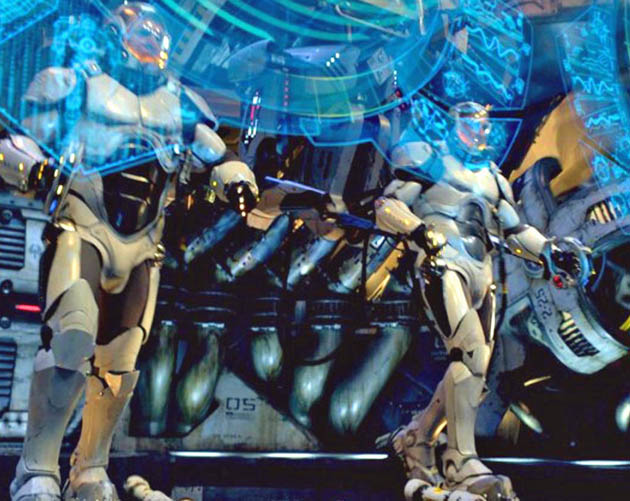 An Iron Man 3 trailer was shown during the Super Bowl (needless to say, U.S. only – or perhaps Canada, too) on Sunday, Feb. 3. Let me rephrase that: the Iron Man 3 trailer wasn’t really a trailer, but a TV spot. Anyhow, whatever you call it, the whole thing goes by in the blink of an eye, keeping you in tremendous suspense as to: Will Tony Stark / Iron Man ever utter an exclamation stronger than “Oh, boy”? (Please scroll down to check out the Iron Man 3 Super Bowl TV spot.)

Now, will Iron Man 3 be superior to Iron Man 2, considered a major letdown by numerous North American critics? Who the hell knows? But one thing seems clear: If Iron Man can (officially) save only four people stranded (quite literally) in mid-air, you can bet your panties that when push comes to shove he’ll be able to rescue four million air-floating humans if need be.

So, “does the man make the suit or does the suit make the man?” Who cares about philosophical issues, as long as the Iron Man 3 visual and sound effects tickle the fancy of moviegoers? That’s all that matters.

Iron Man 3 opens in late April in a couple of dozen countries, including Australia, Mexico, Japan, The Netherlands, Brazil, Spain, Sweden, and the UK. In early May, the latest Iron Man movie will open in another batch of countries, including France, Argentina, Germany, South Africa, and the United States (May 3).

In other words, Inside Llewyn Davis has absolutely nothing to do with either Peter Pan or J.M. Barrie. For the record, the family that inspired Barrie – and that was portrayed (in outrageously fictional form) in Marc Forster’s Finding Neverland – was called Llewelyn Davies.

There isn’t much to be said about the Inside Llewyn Davis trailer, except that fans of Joel and Ethan Coen’s work will be excited, while non-fans will likely take a wait-and-see attitude. (If they bother to check it out at all.) In fact, several of the Coen brothers’ trademarks are to be found in the trailer. Examples range from the presence of John Goodman (featured in Raising Arizona, Barton Fink, The Big Lebowski, O Brother, Where Art Thou?) to the unnatural-sounding dialogue, from Bruno Delbonnel’s low-key but striking cinematography to the awkward, deadpan humor. (The Carey Mulligan dialogue bit about the safety of double condoms is both unnatural-sounding and deadpan; it’s also very funny.)

Loosely based on Dave Van Ronk’s posthumously published book of memoirs, The Mayor of MacDougal Street, Inside Llewyn Davis was adapted by the Coens themselves. Besides John Goodman and Drive players Oscar Isaac and Carey Mulligan, the Inside Llewyn Davis cast includes The Social Network‘s Justin Timberlake; Garrett Hedlund, who did some folk singing in Country Strong and who was recently seen opposite Sam Riley and Kristen Stewart in Walter Salles’ On the Road; and Academy Award winner F. Murray Abraham, who made life hell for Tom Hulce in Milos Forman’s Amadeus. Also in the Inside Llewyn Davis cast: Adam Driver, Alex Karpovsky, Max Casella, Ethan Phillips, Stark Sands, and Jake Ryan.

Modern Times: Charles Chaplin Behind the Scenes + The Lord of the...