Nelson Mandela, the former South African president who spent 27 years in jail and who played a fundamental role in the demise of that country’s apartheid system, died of a lung infection yesterday, Dec. 5. Mandela was 95.

One of the best-known political figures of the late 20th century, the South African leader inevitably became a “prestige” subject for filmmakers.

Below are several Nelson Mandela movie titles – curiously, most of them directed by and starring talent not from South Africa, but from Britain and/or the United States.

With perfect timing, Mandela: Long Walk to Freedom opened this past weekend in the United States. On its first three days out, Nov. 29–Dec. 1, the Weinstein Company release took in $84,283 from four theaters, averaging an okay $21,071 per venue.

For comparison’s sake, in late November 2010 Tom Hooper’s The King’s Speech – another Weinstein Company “inspirational” release about an English-speaking political leader – collected $355,450 at four locations, averaging an outstanding $88,862 per venue.

So, what could be the problem with Mandela: Long Walk to Freedom?

One possibility is that in spite of Idris Elba’s generally solid notices, Justin Chadwick’s film has a mediocre 58 percent approval rating and 5.7/10 average among Rotten Tomatoes‘ top critics.

On the positive side, the Chadwick-Elba collaboration has, relatively speaking, fared better in South Africa. According to distributor Videovision Entertainment (through United International Pictures South Africa), the biopic topped the local box office on opening day last Thursday, Nov. 28, grossing approximately US$74,000 and averaging about $860 per theater.

Ironically, Nobel Peace Prize winner Nelson Mandela (more on the Swedish Academy’s honor further below), whose at times violent political activism is only marginally depicted in Mandela: Long Walk to Freedom, was on the U.S. terrorist watch list until 2008.

“Can we abandon a country that has stood by us in every war we have ever fought, a country that is strategically essential to the Free World in its production of minerals that we all must have?”

Adapted by August and Greg Latter, Goodbye Bafana is based on Gregory’s autobiography, Goodbye Bafana: Nelson Mandela, My Prisoner, My Friend, which was dismissed as a fictitious account by Mandela’s friend Anthony Sampson.

The film itself has been criticized for compounding the fabricated elements found in Gregory’s tale – e.g., having the warden call the prisoner “Madiba,” which is supposed to be a Xhosa name implying respect, whereas throughout his book Gregory refers to Mandela in a less reverential manner, calling him simply “Nelson.”

In his own book, Long Walk to Freedom, Mandela reportedly mentions Gregory only twice. At one point, he makes it clear that, despite their cordial relationship, political debates were off-limits during his time behind bars.

“Warrant Officer James Gregory was there at the house, and I embraced him warmly. In the years that he had looked after me from Pollsmoor [Prison] through Victor Verster [Prison], we had never discussed politics, but our bond was an unspoken one and I would miss his soothing presence.”

James Gregory died of cancer in 2003. 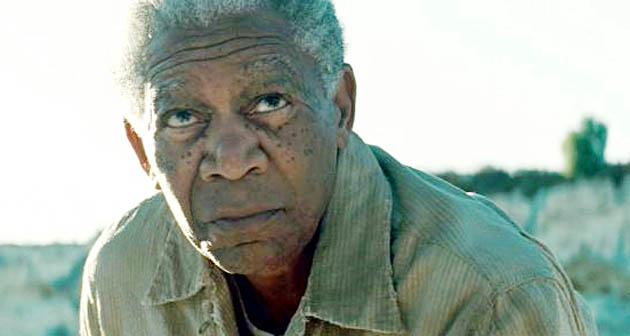 Invictus with Morgan Freeman as Nelson Mandela. Millions of delusional moviegoers love happy endings even when none such existed in real life (e.g., My Left Foot, A Beautiful Mind); that helps to explain the approach taken by Invictus director Clint Eastwood and adapter Anthony Peckham. Starring Morgan Freeman as a visionary and politically savvy Nelson Mandela and Matt Damon as Francois Pienaar, captain of South Africa’s all-white World Cup rugby team, Invictus shows how competitive sports can unite a nation – as long as the local team comes out on top and the story ends right then and there.

Adapted by Anthony Peckham from John Carlin’s book Playing the Enemy: Nelson Mandela and the Game That Made a Nation, Invictus (“unconquered,” “undefeated”) portrays Mandela as a visionary, inspirational, and pragmatic leader who, with the assistance of the country’s official (all-white) rugby team, uses the masses’ passion for competitive sports to unite post-apartheid South Africa in the mid-1990s.

Left unanswered is the question, What could have happened to South Africa at that difficult sociopolitical juncture had Mandela’s Rugby World Cup gambit not paid off?

Following his death, bits from Nelson Mandela’s pop political wisdom – or just plain political platitudes, depending on your take – have been popping up everywhere you look. The one below is from a 2000 speech at Monaco’s Sporting Club Monte Carlo:

“Sport can create hope, where once there was only despair. It is more powerful than governments in breaking down racial barriers. It laughs in the face of all types of discrimination.”

Considering the intrinsically tribal nature of competitive sports, that’s a curious – rather than inspirational – remark. And needless to say, history has proven itself to be quite a bit more complex than what is shown in Clint Eastwood and Anthony Peckham’s feel-good Hollywood movie.

Here are a handful of other big-screen narrative features in which Nelson Mandela is seen[2]:

Also worth noting, as Peter Bradshaw has just recently reported in The Guardian, British filmmaker Peter Kosminsky (White Oleander, Wuthering Heights) “got into hot water a couple of years ago by proposing a film called Young Mandela, when Mandela was a fiery ANC soldier who very much did not believe in non-violence. The film has not yet been made.”

South African TV and film actor Tumisho Masha (Drum, Catch a Fire) was cast as Mandela. Curiously, a couple of months prior to the film’s release at the Joburg Film Festival, Masha was arrested after allegedly assaulting his estranged wife. 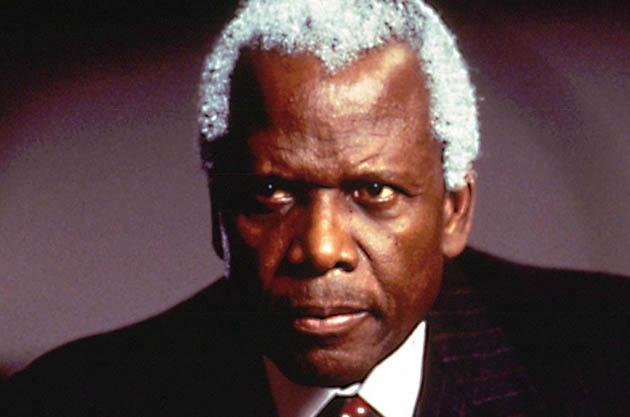 In 1993, the (by then ex-)prisoner and – more controversially – the president shared a Nobel Peace Prize “for their work for the peaceful termination of the apartheid regime, and for laying the foundations for a new democratic South Africa.”

When it comes to winning trophies, Sidney Poitier and Michael Caine were less lucky during the 1997–1998 awards season, though Caine was shortlisted for a Golden Globe, Poitier for a SAG Award, and both Poitier and Caine for the Emmys.

Ten years before Mandela and de Klerk – while Nelson Mandela was still languishing behind bars – American actor and eventual Emmy nominee Danny Glover played the South African political prisoner in another TV movie, concisely titled Mandela. London-born Philip Saville directed from a script by the Cape Town-born, London-based, Oscar-winning screenwriter Ronald Harwood (The Pianist, 2002; also nominated for The Dresser, 1983, and The Diving Bell and the Butterfly, 2007).

And finally, as an actor himself, Nelson Mandela was featured in a small role as a Soweto teacher who, sounding just like a well-rehearsed politician, provides a lecture on human rights in Spike Lee’s biopic Malcolm X (1992), featuring Denzel Washington as the American political activist.

Mandela was also seen as himself in Jo Menell and Angus Gibson’s Academy Award-nominated documentary feature Mandela, a.k.a. Mandela: Son of Africa, Father of a Nation.

See also: Colonialism in Africa & Its Legacy: ‘Something of Value’ & ‘District 9’.

[1] Ronald Reagan’s pro-apartheid South Africa quote via Media Matters, in an article contrasting how U.S. right-wingers saw South Africa’s racist political system back in the day and how they reacted to Nelson Mandela’s recent death.