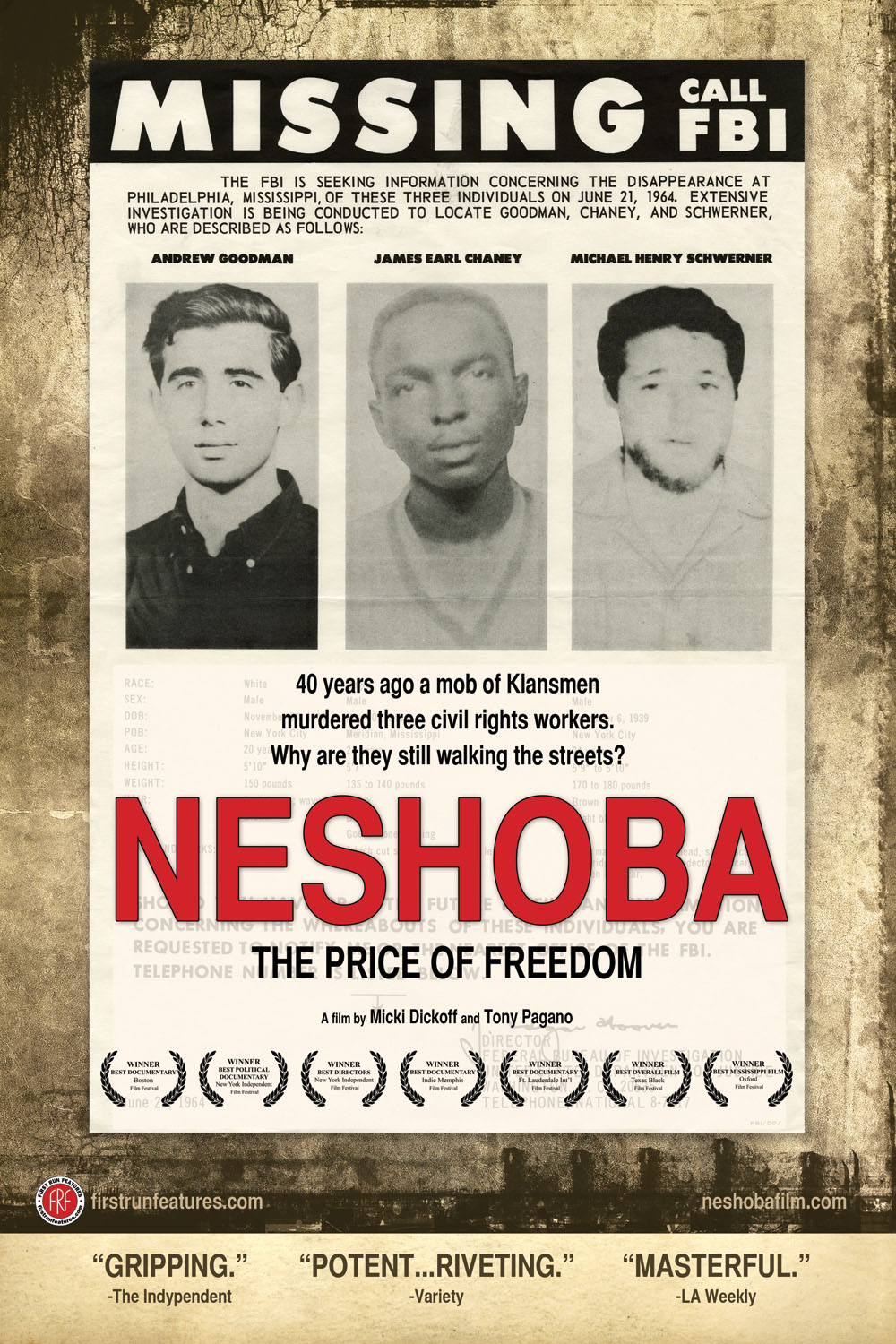 Directed, produced, and edited by Micki Dickoff and Tony Pagano, Neshoba: The Price of Freedom offers a unique peek into the mind of an unrepentant racist, Edgar Ray Killen.

Killen, a Baptist preacher and the leader of a group of Klansmen accused of brutally murdering civil rights workers James Chaney, Andrew Goodman and Michael Schwerner in Neshoba County, Miss., in June 1964, is the only person ever convicted of the heinous crime known as the “Mississippi Burning” murders.

“The tools used to tell the tale (particularly old newsreels, family photos and seldom-seen crime scene and autopsy photos) are masterfully employed,” says Ernest Hardy in the LA Weekly. “Within the first 15 minutes, Dickoff and Pagano milk tear ducts (iconic newsreel footage of a young Ben Chaney weeping as he sings ‘We Shall Overcome’ at his brother’s funeral has lost none of its power to devastate), and then use that emotion to fuel the rest of the film.”

At Cinematical, Christopher Campbell adds that Neshoba features the “boldly forthright Killen and other stunning statements from Klu Klux Klan members who ironically believe they’re victims of prejudice and are granted no rights in this country, [which] make the film a must-see for anyone concerned with the state of tolerance in the U.S.”

Both Dickoff (who also wrote Neshoba) and Pagano have kindly agreed to answer a few questions (via e-mail) about their documentary, the unexpected opportunity to delve into Killen’s inner workings, and their own views on whether justice has been done for Chaney, Goodman, and Schwerner, and others like them.

Neshoba: The Price of Freedom, voted the best documentary at, among others, the Boston and Ft. Lauderdale film festivals, opens in New York City today at the Cinema Village.

Neshoba opens in the Los Angeles area at the Laemmle Music Hall in Beverly Hills and at the Laemmle Playhouse Pasadena on September 10. (More playdates here.)

What was it like to get Edgar Ray Killen to discuss the “Mississippi Burning” murders?

Dickoff: Filmmakers, news reporters and journalists have been trying to interview Killen since 1964 without much success. (Killen tells a story about how Connie Chung used to camp outside his house trying to get an interview, but never did.)

Tony and I were in the right place at the right time. We were in Neshoba County, Mississippi, making a film about long-delayed justice in the “Mississippi Burning” case when Killen was indicted 10 months after we started shooting. The indictment opened a small window of opportunity, and Killen granted us one interview which turned into five months of interviews. We told Killen we wanted to tell his story, his truth, in his words, and we meant it. His huge ego and his belief system did all the rest.

It was important to get inside Killen’s head to understand how these murders could have happened and gone unpunished for 40 years. The hardest part for me during all those months was not debating him on some things he said. It was his truth we were trying to get at, not ours. I’m not sure I could have controlled myself 20 years ago.

Pagano: Surreal was the experience. We had gained a lot of his trust having spent so much time with him. He was more than willing to express his views with us.

It was professionally extremely gratifying to know that an independent documentary team had scooped the world media looking to ask those very same questions.

How difficult (or easy) was it to get locals to talk about traumatic events that took place more than four decades ago?

Dickoff: We began shooting the film in 2004 at the 40th anniversary of the murders. We were following the Philadelphia Coalition, a multi-racial group of 30 Neshoba County citizens, who called for justice in this case for the first time in 40 years. We focused on five members of the Coalition who cooperated with us fully.

In order to paint an accurate picture of Neshoba County, we talked to other black and white citizens with diverse points of view. There were some who didn’t want to talk with us at all. For the most part, folks in the black community wanted justice, but there were still many folks in the white community who wanted to “let sleeping dogs lie.” And a small, but vocal part of the white community still think the murders were justified.

Pagano: Most locals on both sides of the issue were willing to discuss their views about the events that took place more than four decades ago.

Would you say most people in Mississippi (and in Neshoba County) believe that justice has been served, or…? Is there a “color line” (or perhaps a “political line”?) dividing people in the way they see the outcome of the Killen trial?

Dickoff: Many Neshoba Countyans, blacks and whites, are relieved and proud that some measure of justice was meted out in this case. However, some white citizens believe the trial of an 80-year-old man was a waste of time and money and another stain on Mississippi. Ben Chaney sums it up best: “It may take another 50 years before all these people die out” for real change to happen.

Race relations have gotten better in Mississippi in 40 years, but like in most places in this country, there’s a long way to go. That proverbial railroad track still divides the black and white community in terms of housing in Philadelphia, Mississippi. Today, discrimination is evidenced by the lack of economic and educational opportunity for many black citizens.

Pagano: The division of views over the outcome of the Killen trial were determined by age, race, political views, and economics.

In your view, quoting from the press release, does “the prosecution of one unrepentant Klansman constitutes justice” and are “healing and reconciliation … possible without telling the unvarnished truth”?

Dickoff: I do not believe that the prosecution of one unrepentant Klansman constitutes justice. Killen enjoyed his life, spouted his hate and thought of himself as a hero for 40 years. James, Andy and Mickey were in their early twenties when they were brutally murdered.

Also, Killen did not act alone. There were 21 men directly involved in the conspiracy, and dozens of others who knew about it but remained silent. Killen and the others were encouraged and protected by governors, senators, and other “upstanding” white racists who believed in any means necessary to preserve segregation and their way of life.

I believe the only way to achieve justice and healing 46 years after the murders of three young heroes is to tell the “unvarnished” truth. I hope the film helps provoke honest dialogue about race in America.

Pagano: Mississippi, in my opinion, went after the obvious and most outspoken villain. In many ways Killen is a political scapegoat. Justice will only be served when all those living involved in the murders and charged in the 1967 trial are prosecuted.

In case you don’t see Killen’s conviction as “justice,” then why hasn’t justice been done? Where/who are the other Klansmen responsible for those murders?

Dickoff: The conviction of Killen is symbolic justice. He lived to be 80 years old. He did not act alone, yet no one else was held accountable. There is no balancing the scales for the murders of 3 innocent young men 40 years ago. Justice can only come now by using truth to lay the groundwork for justice, healing and reconciliation.

The identity of the men involved in the murders has never been a secret. They bragged openly in 1964. In 2005, eight of the perpetrators were still alive. In 2010, there are only four. When the State waits more than 40 years to try a case, witnesses are dead and evidence lost. The State of Mississippi should have done the right thing a long time ago.

I say too little, too late, but better than nothing. The trial of Killen brought the issue to a head and compelled Mississippi and the nation to talk honestly about racial healing and discrimination.

I believe justice also comes through groups like the Philadelphia Coalition, ordinary citizens standing up for what they believe, trying to heal painful wounds. I hope the film encourages people in other communities to get together and make a difference.

It’s also important to keep in mind that the only reason the “Mississippi Burning” case achieved such importance is because two of the kids were white. Hundreds of Blacks (and a few whites) were murdered in the south during the civil rights struggle. We need to remember and bring justice for these cold cases too, if not in criminal convictions, then in other ways. The price of freedom was very high and these heroes who paid with their lives must not be forgotten.

My son and I were one of 9 people who paid
to see Neshoba at Cinema Village, 22 East 12th
Street in NYC.

We both found the documentary to be powerful,
exposing the still strong feelings, on both
sides in that community.

I am glad this documentary was made. Justice for those murdered because they stood against racism and bigotry must be achieved. Even if it is 40 years later, the truth is still the truth and those who are guilty must pay for what they did.