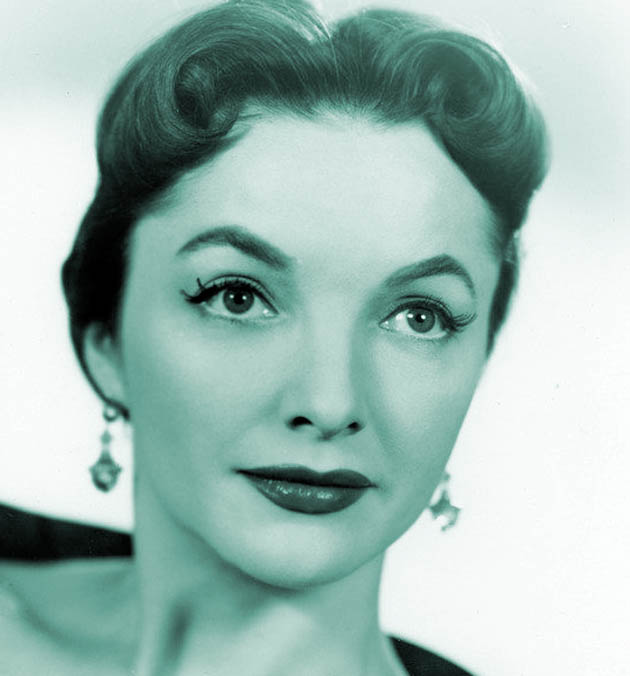 Neva Patterson, best known for playing Cary Grant’s fiancée in Leo McCarey’s 1957 romantic comedy classic An Affair to Remember, died of complications from a broken hip on Tuesday, Dec. 14, at her home in the Los Angeles suburb of Brentwood. She was 90.

In a career spanning more than four decades, Patterson (born on a farm near the town of Nevada, Iowa, on Feb. 22, 1920) was featured in dozens of television productions and, as a supporting player, in 15 movies.

Additionally, she originated the role of Helen Sherman – will husband Tom Ewell cheat on her with foxy neighbor Vanessa Brown? – in the Broadway production of George Axelrod’s comedy of mores The Seven Year Itch (1952–1955).

In Billy Wilder’s 1955 movie version, however, Evelyn Keyes was cast as Helen, playing opposite Ewell and Marilyn Monroe. That’s not exactly surprising, as Patterson’s movie career would, however briefly, only take off the following year.

Neva Patterson made her film debut in Gregory Ratoff’s 20th Century Fox B drama Taxi (1953), starring Dan Dailey and Constance Smith. Another three years would pass before she landed her second movie role.

In later years, Neva Patterson would have small roles in a handful of movies, among them Alan J. Pakula’s All the President’s Men (1976); Steve Rash’s The Buddy Holly Story (1978), as the singer’s mother, Ella Holly; and, in her final big screen appearance, Carl Reiner’s “possession” comedy All of Me (1984).

Yet Patterson is best remembered for one particular role, in which she gets the chance to stoically lose Cary Grant to Deborah Kerr. 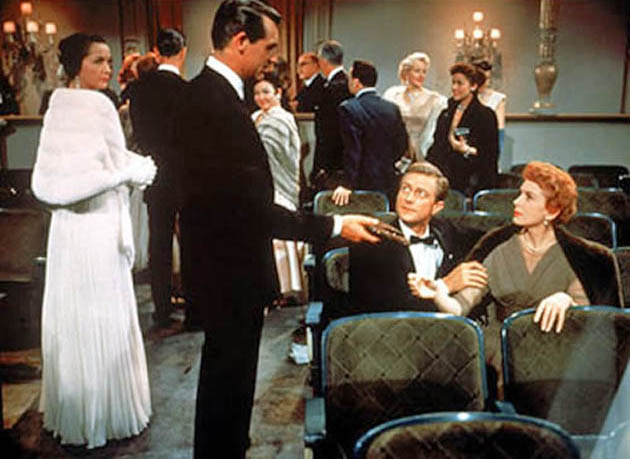 Neva Patterson in An Affair to Remember with ex-fiancé Cary Grant, his soulmate Deborah Kerr, and her ex-fiancé Richard Denning. Leo McCarey’s popular 1957 remake of his own romantically entangled Love Affair (1939) remains one of the best-known Hollywood movies of the decade and, by far, Neva Patterson’s best-remembered film appearance.

‘An Affair to Remember’: Cultural landmark

An Affair to Remember, a remake of Leo McCarey’s own Love Affair (1939), is one of the romantic Hollywood classics. Even at the movies themselves.

Here are a couple of examples:

Besides, there would be a second Love Affair / An Affair to Remember remake the year after the highly successful Sleepless in Seattle came out: Glenn Gordon Caron’s poorly received flop Love Affair, starring Warren Beatty and Annette Bening as the will-they-won’t-they couple.[1]

Based on a “story” (frequently that means either a treatment or the first draft of a screenplay) by Leo McCarey and Mildred Cram, Donald Ogden Stewart and Delmer Daves’ script for the 1939 Love Affair revolves around the unexpected romance that blossoms between two strangers on board an ocean liner[2]: French painter Charles Boyer and American singer Irene Dunne, both of whom already have other commitments (Astrid Allwyn is Boyer’s fiancée; Lee Bowman is Dunne’s).

With a few adaptations to accommodate the talents of Cary Grant and Deborah Kerr, An Affair to Remember follows the same plotline. So much so that McCarey and Cram once again received credit for the “story,” while McCarey and Delmer Daves were credited for the shooting screenplay. (Donald Ogden Stewart’s name was removed because he had been blacklisted at the time.)

Although purists find the remake inferior to the 1939 original, An Affair to Remember was the version that caught on. In addition to the two highly popular leads, the film benefited from Milton Krasner’s dreamy color cinematography, Hugo Friedhofer’s melodious score, and all the production values that 20th Century Fox’s money could buy.

As the society woman previously engaged to Cary Grant’s aging playboy, an immaculately dressed and bejeweled Neva Patterson (nothing “rural Iowa” about her) valiantly continues her friendship with her ex-fiancé even though she knows he is deeply in love with the woman who – due to a twist of fate – stood him up at their planned meeting atop the Empire State Building.

Now, unlike the Making Love characters, Neva Patterson may not have been able to remember every bit of dialogue found in An Affair to Remember, but she did have fond memories of making the film.

“She just loved the fact that she kissed Cary Grant the first day on the set,” her daughter told the Los Angeles Times. “She really loved Cary Grant.” 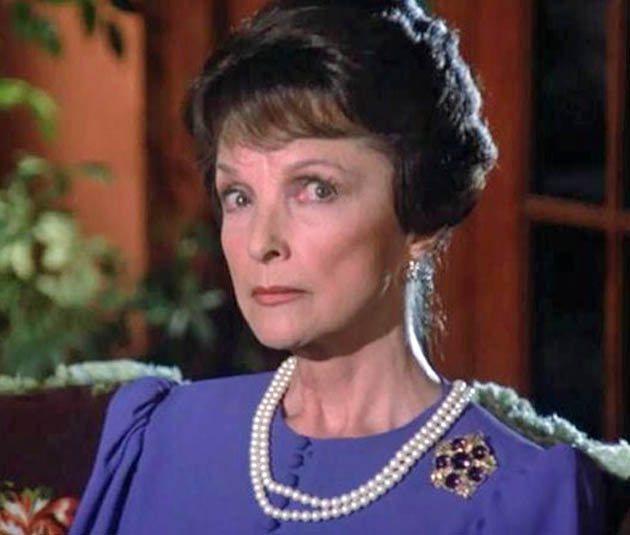 V miniseries with Neva Patterson as Eleanor Dupres. In the cult 1983 sci-fi TV miniseries V, Neva Patterson, by then a veteran with a nearly four-decade acting career, plays the hero’s fashion-conscious mother – who also happens to be a collaborator with a group of humanoid reptilians determined to seize control of Planet Earth and its inhabitants.

Neva Patterson began her television career in 1949, a couple of years after her start on the Broadway stage. As found on the IMDb, nearly 100 TV appearances would follow, among them guest roles in a variety of anthologies and series, from Danger, Studio One in Hollywood, and Playhouse 90 to Charlie’s Angels, The Waltons, and Remington Steele.

Notable among her TV credits were the series The Governor & J.J. (1969–1970), in which she had a recurring role as the secretary of her Taxi leading man Dan Dailey (as the Governor), and the short-lived James Garner Western series Nichols (1971–1972), with Patterson as the matriarch of a powerful clan in an ethically challenged Arizona desert town.

Neva Patterson played Eleanor Dupres, the mother of journalist Mike Donovan (Marc Singer), who discovers that alien visitors are less friendly – and less human – than they look. Too bad Mom is collaborating with the dangerous outer-space intruders.

Her final appearance in front the camera was in a 1992 episode of the cop series In the Heat of the Night.

While acting in The Seven Year Itch on Broadway, Neva Patterson, by then – according to her Los Angeles Times obit – twice-divorced, met prop department worker James Lee. They were married in 1957.

Later a screen and television writer, Lee would become best known for collaborating on the epoch-making, multiple Emmy-winning 1977 miniseries Roots, for which he received (for Part V) an Emmy nomination in the Outstanding Writing in a Drama Series category.

Other notable James Lee credits include:

James Lee also co-wrote with Joel Oliansky the screenplay for Ralph Nelson’s World War II thriller Counterpoint (1967), based on a novel by Alan Sillitoe. Charlton Heston and Maximilian Schell starred, while Neva Patterson was featured in a small role.

‘Love Affair’ & ‘An Affair to Remember’ predecessor: ‘One Way Passage’

[1] For the record, Neva Patterson’s An Affair to Remember role was played by Kate Capshaw in 1994.

[2] Love Affair has nothing in common with Columbia Pictures’ 1932 programmer of the same name, which starred Dorothy Mackaill and Humphrey Bogart.

Love Affair does, however, have quite a bit in common with another 1932 release: Warner Bros.’ One Way Passage, directed by Tay Garnett, and starring William Powell and Kay Francis as two people who meet on board an ocean liner. Both of them already have other commitments: he with the gallows; she with a terminal illness.

Wilson Mizner and Joseph Jackson were credited for the One Way Passage screenplay; Robert Lord for the Academy Award-winning “original story.”