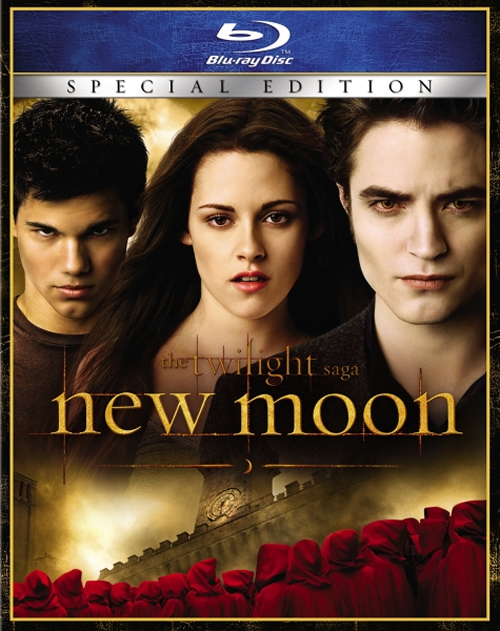 Say what you will about the box office performances of Remember Me or The Runaways, but Robert Pattinson and Kristen Stewart surely have their millions of enthusiastic fans.

According to the Los Angeles Times, those figures include only discs sold directly to consumers – not rentals, digital downloads or video-on-demand.

In theaters, New Moon outgrossed Twilight by more than $100 million. In fact, the vampire-human-werewolf romantic saga (or soap, if you will) is still adding some change at more than 100 North American screens.

But if the 200,000 DVD difference doesn’t sound all that impressive, then consider that Summit will in all likelihood be releasing a “special” edition with more and better features in the not-too-distant future. (Much like what 20th Century Fox is doing with James Cameron’s Avatar.) Many twihards may be waiting for that future release. (But then again, if you’re a real twihard, you’d buy both DVD editions.)

And don’t forget that DVD sales in the United States fell 13 percent last year. In other words, a 200,000-unit increase is nothing to be sniffed at.

Last year, Twilight topped DVD charts, with 9.2 million units sold. We’ll see if New Moon will be able to go above that.

At some stores like Target, Borders, Best Buy, Barnes and Noble, and Walmart, you’ll be able to find a couple of deleted scenes or perhaps a Twilight Saga: Eclipse preview on the Blu-Ray edition. It all depends on where you buy the disc.

And don’t forget that The Twilight Saga: New Moon is still playing at 145 screens in North America after being out for 124 days.

Below are a snippets from a few reviews of the New Moon DVD:

“We’ve seen: One at Wal-mart with about an hour of extra stuff and a clip from Eclipse. At Target you get two discs that include some outtakes that aren’t in this edition and some kind of film cell. At Barnes and Noble, there is an edition that is packaged with an Indian “dreamcatcher” and at Borders you can get more bonus features and a medallion thingie. Best Buy has a fancy edition in a steel case.” Lynn Barker at Teen Hollywood.

“Most Twihards will already be watching this release by now, which is a testament to Twilight’s popularity and appeal. It is difficult to review this film as a critic, as it’s really not that great of a movie. But it is completely faithful to the book, and the books are definitely not the best written books in the world. New Moon makes no apologies that it is for the fans. If you’re not already a fan, stay away.” Jenny Rushing at Inside Pulse.

“In Ed’s absence moping Bella hooks up with Jake (Taylor Lautner), who happens to be a werewolf and seems incapable of keeping his shirt on; not that any, you know, SEX happens here. No[,] this adaptation of Stephanie Meyer’s bestseller is like an episode of Dawson’s Creek, only more chaste and with any hint of humour sucked out. A creepy opening sequence, but a dire sequel.” Ben Walsh in The Independent.

Robert Pattinson, Kristen Stewart, and Taylor Lautner are the stars of The Twilight Saga: New Moon, which sold four million copies on its first two days out. Last year, Twilight went on to sell more than nine million units.

Below are a few more reviews and commentaries about the Twilight Saga: New Moon DVD release, which comes in different versions – depending on where you buy it.

“The non-ending, calculated to make young female fans gasp, plays more like a season-capping TV episode than a movie; it’s a shameless cliffhanger for the third film … The second disc is a burn; the six self-congratulatory vignettes – really just infocommercials for the cast and crew’s awesomeness – could have fit on one disc.” The New Jersey Star-Ledger.

“Because the Twilight books and movies are a full-fledged phenomenon, no review is going to prevent the home video releases from becoming bestsellers, but you shouldn’t feel bad if you don’t understand what the fuss is about. You’re not alone.” Forrest Hartman in the Reno Gazette Journal. 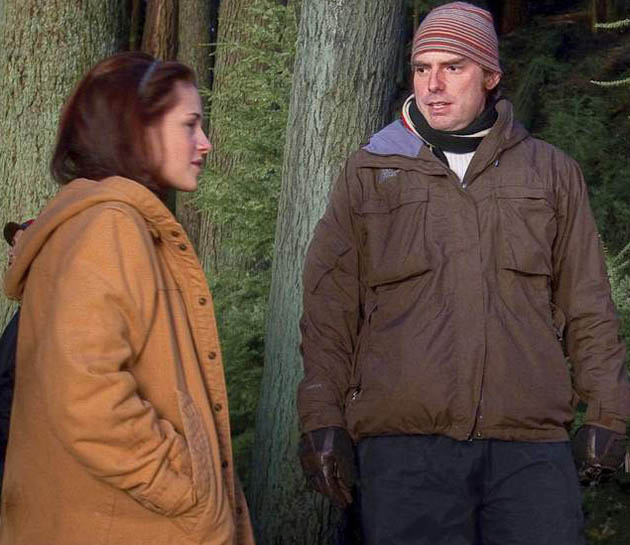 Chris Weitz on ‘New Moon’ set, with Kristen Stewart as Bella Swan about to be abandoned by Edward Cullen (Robert Pattinson).

As an aside, Chris Weitz discusses the making of The Twilight Saga: New Moon and working with Robert Pattinson and Kristen Stewart in an interview found at Movieweb.

Weitz adds that he was never meant to continue with the Twilight series, whether on Eclipse or Breaking Dawn, explaining, “I think the continuity is supplied by the actor and the series of books.”

About David Slade, who is supposed to be bringing a darker vision to Eclipse, Weitz says:

Just as New Moon looked different from Twilight, I’m sure Eclipse will look different from New Moon. That is good. I don’t want to make anybody follow any type of particular aesthetic. The reason he was brought on was to make every movie different. I think Eclipse is much more action-intensive. For instance, I am pretty terrible at shooting action. He is much better in that regard.

In the interview, Chris Weitz also discusses the New Moon promotional tour, negative critical reaction to the film (“We still live in a state where pop culture is dominated by male desires”).

Eclipse, the third installment in the Twilight Saga franchise, will hit North American theaters on June 30.

Box Office Down: Why Are Fewer Americans Going to the Movies?