Next Door movie: Going where Alfred Hitchcock feared to tread

Screened at Los Angeles’ AFI FEST 2005, the Norwegian psychological horror-thriller Next Door / Naboer offers a portrayal of a desperate man (Kristoffer Joner) who finds himself in some very strange places – both literally and figuratively – following a nasty confrontation with his former girlfriend (Anna Bache-Wiig).

Besides director-screenwriter Pål Sletaune’s solid grip on the disturbing, at times sexually charged, proceedings – Sletaune goes where Alfred Hitchcock never dared to venture – Next Door boasts several outstanding performances, including those of Cecilie A. Mosli and Julia Schacht as two peculiar sisters.

But most notable of all is Kristoffer Joner as the sisters’ emotionally distraught neighbor. In fact, Joner’s superb antihero, at turns creepy and pitiable – sometimes both – is by far the best male performance I’ve seen so far this year.

As a plus, Next Door boasts a first-rate Psycho-inspired score by Simon Boswell.

One of my two favorite films at AFI FEST 2005 took me completely by surprise. Eighty-two-year-old Seijun Suzuki’s remarkable musical Princess Raccoon / Operetta tanuki goten consists of an eclectic mix of highly stylized and naturalistic sets, catchy tunes ranging from mild rap to hot salsa, myriad plot twists and turns, and special effects that are purposefully – and beautifully – simple. (One such brings back from the dead veteran actress Hibari Misora.)

All that, plus dialogue in a variety of languages, from Japanese to Portuguese. The result is a whimsical – if at times challenging and a bit overlong – mélange perfectly appropriate for the wacky fairy tale played out on screen.

Crouching Tiger Hidden Dragon actress Zhang Ziyi is charming as the Princess Raccoon of the (English-language) title – a “demon,” or spirit, who falls in love with a handsome mortal (Jo Odagiri). But it is Saori Yuki, as a cunning, rap-singing prophetess, who runs away with the film.

‘Fuck’ documentary : Freedom of speech (or lack thereof) in the United States

Directed by Steve Anderson, Fuck is a curious documentary that pretends to be about one of the most offensive (and most convenient and widely used) words in the English language, but that is actually a generally perceptive – if somewhat narrow in scope – examination of freedom of speech in the United States.

Ranging from recently deceased author Hunter S. Thompson, to whom the film is dedicated, to adult film star Tera Patrick, numerous talking heads debate the history, the myriad meanings and grammatical forms, and the symbolic value of that multi-faceted word. 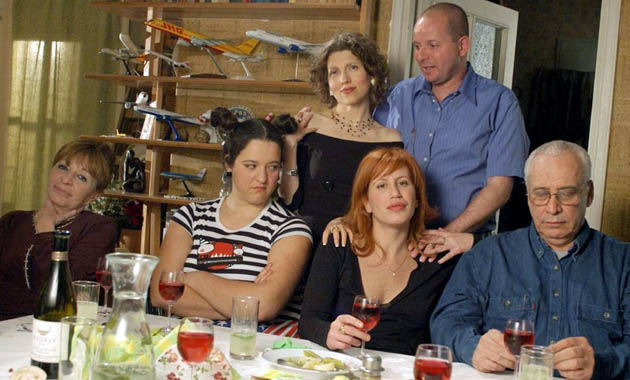 Directed by Julie Shles (of the 1999 comedy Afula Express), the quirky Israeli comedy-drama Joy / Muchrachim Lehiyot Same’ach is a modern fairy tale in which magic wands and pumpkin carriages are replaced by the more humanistic magic of empathy and forgiveness.

Set in Tel Aviv around the time of Yom Kippur, Joy chronicles the struggles of an overweight, homely girl (Sigalit Fuchs) who wants her lonely parents’ former friends – Dad was a major womanizer who alienated a lot of people – to attend a televised friends & family reunion. Along the way, she discovers both self-respect and (an unusual) Prince Charming.

Although Shles’ direction and Omer Tadmor’s screenplay meander aimlessly every now and then, they should be commended for placing a strong focus on their characters’ quirky traits while avoiding the trap of cheap sentimentality.

As a plus, Joy is well worth watching thanks to several remarkable performances, especially those of newcomer Sigalit Fuchs* as the (English-language) title character and Rivka Michaeli as the young woman’s bossy mother – both of whom won, respectively, Best Actress and Best Supporting Actress Ophir Awards (Israeli Film Academy Awards) earlier this year.

* According to the IMDb, Fuchs’ sole previous big-screen credit was a small role in the multiple Israeli Film Academy Award-winning comedy-drama Nina’s Tragedies. 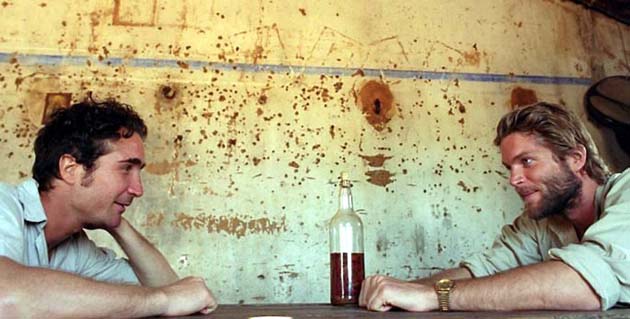 Set in 1942 and featuring an itinerant “cinema city” of sorts, Cinema, Aspirin and Vultures is a touching dramatic comedy about the grudging friendship that develops between a German World War II refugee (Peter Ketnath) and a Brazilian migrant peasant (João Miguel) in Brazil’s arid, impoverished Northeast.

The tale of a young Indian-American woman who, while visiting her adoptive family in Delhi, discovers the shocking – and politically charged – truth behind her adoption, Shonali Bose’s Amu is the sort of well-intentioned movie one wants to like. Unfortunately, that is not quite the same thing as actually liking it.

Yet, despite flaws in storytelling, direction, and acting – one crucial shortcoming is young leading lady Konkona Sen Sharma’s inability to convey the complexity of the titular heroine’s growing pains – Amu is definitely worth a look because of its politics.

Generally, political films fail to make their point clear, diluting it in melodramatic personal stories. Amu works the other way around; the personal stories are less interesting than the film’s political setting. Indeed, Amu‘s dramatic highlights are the scenes depicting the horrors of the bloody Delhi riots in the aftermath of Prime Minister Indira Gandhi’s 1984 assassination.

Now, the real highlight of Amu‘s AFI FEST 2005 screening took place after the final credits. That’s when impassioned filmmaker Shonali Bose appeared onstage for a Q&A session, during which she lambasted the many Indian governments of the last 20 years that have willfully failed to prosecute the orchestrators of the Delhi riots – some of whom were state and local government leaders. 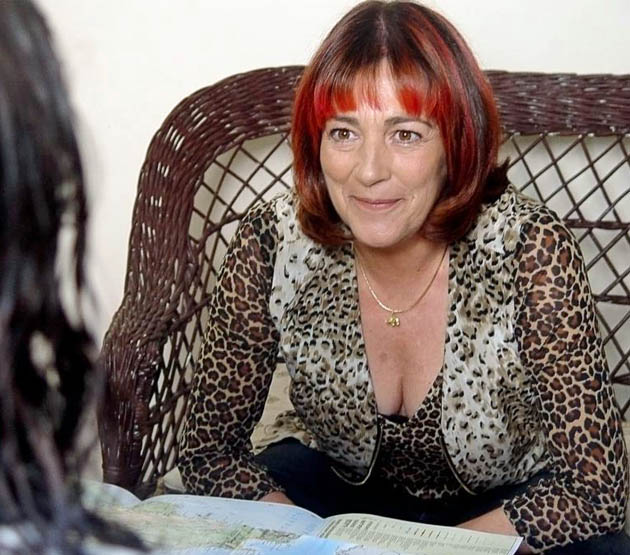 Carmen Maura in ‘To the Other Side / Al otro lado’: Leader of teen prostitution ring.

‘To the Other Side’: Sentimental immigration drama

Gustavo Loza’s Mexican drama To the Other Side / Al otro lado tells the interspersed stories of three children – one Mexican, one Cuban, one Moroccan – whose fathers have crossed to the other side. No, not the Great Beyond, but somewhere almost as mysterious and alien: the wealthy lands north of the Rio Grande and the Mediterranean Sea.

However well-intentioned, Loza’s handling of the three episodes is uneven, and the film would have worked better had it focused on a particular story, preferably the Moroccan tale. That segment, which has a little girl (Nuria Badih) traveling on her own from Morocco to Spain in search of her emigrant father, is the least sentimental and most well-rounded of the three. Unsurprisingly, it happens to be the most touching as well.

Also in the Moroccan-Spanish segment, former Pedro Almodóvar muse Carmen Maura makes a brief but effective appearance as the leader of a teen-prostitution ring.

To the Oscar side?

Although Gustavo Loza’s sentimental approach failed to win me over, it may well be the right ingredient to get To the Other Side a Best Foreign Language Film nomination for the 2006 Academy Awards.

Fuck, Princess Raccoon, Next Door, Joy film, Cinema, Aspirin and Vultures, Amu, and To the Other Side reviewed at AFI FEST 2005.