The Nick Nolte movie that earned him a Best Supporting Actor Oscar nomination this year was Gavin O’Connor’s Warrior. In the photo, Nolte, among whose movies are The Deep, 48 Hrs., Hotel Rwanda, and Arthur, is seen at the Academy of Motion Picture Arts and Sciences’ Oscar Nominees Luncheon in Beverly Hills, California, on Monday, February 6, 2012. Meryl Streep can be seen applauding him in the – upper left – background. Nolte, by the way, turns 71 on Feb. 8. (Image: Greg Harbaugh / © A.M.P.A.S.)

In 1991, Nolte lost to Anthony Hopkins for his performance as a mad murderer in The Silence of Lambs. In 1998, he lost to Roberto Benigni for his performance as a devoted father in Benigni’s own La vita è bella / Life Is Beautiful, a Holocaust comedy-drama. Nolte’s Best Supporting Actor competition this year consists of Max von Sydow for Stephen Daldry’s Extremely Loud and Incredibly Close, Christopher Plummer for Mike Mills’ Beginners, Jonah Hill for Bennett Miller’s Moneyball, and Kenneth Branagh (as Laurence Olivier) for Simon Curtis’ My Week with Marilyn.

The 2012 Academy Awards will be presented on Sunday, Feb. 26, at the Kodak Theatre at Hollywood & Highland Center. In the United States, the Oscarcast will be televised live by ABC. 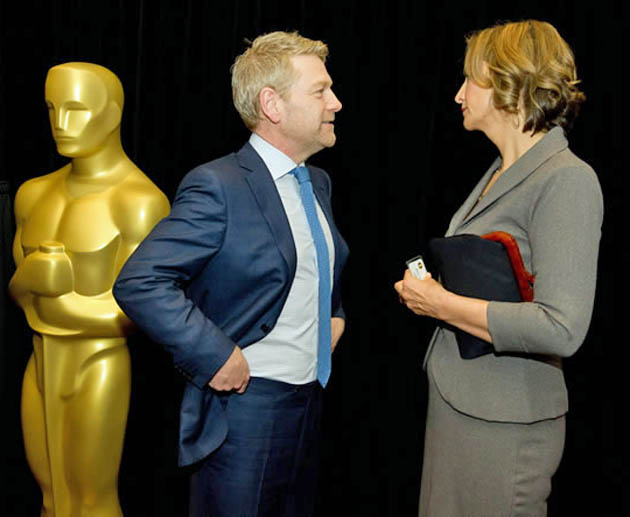 Kenneth Branagh and Janet McTeer have a little chat while at the Oscar Nominees Luncheon held in Beverly Hills on Monday, Feb. 6, ’12.

Branagh is a Best Supporting Actor contender for Simon Curtis’ My Week with Marilyn, in which he plays Laurence Olivier directing/co-starring with Marilyn Monroe (Michelle Williams) in The Prince and the Showgirl. McTeer is a contender for her performance as a woman masquerading as a man in Rodrigo García’s Albert Nobbs, opposite fellow masquerader Glenn Close.

Kenneth Branagh is back

Kenneth Branagh was previously nominated for Oscars for the following:

Perhaps not coincidentally, Laurence Olivier was a Best Actor nominee for Henry V (1946) and a Best Actor winner for Best Picture winner Hamlet (1948), both of which Olivier also directed. (He received a Best Director Academy Award nomination only for the latter.)

Back to 2012 … Kenneth Branagh’s Best Supporting Actor competitors are: 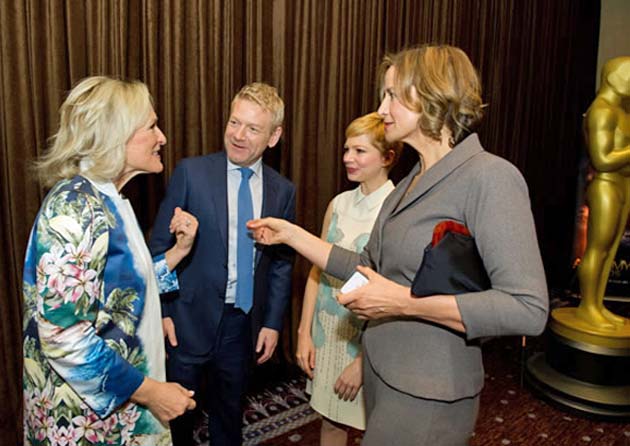 Glenn Close, Kenneth Branagh, Michelle Williams, and Janet McTeer are pictured above while at the Oscar Nominees Luncheon. As to why Glenn Close looks so excited, your guess is as good as ours.

And that means Close and Williams are competing for the same Academy Award. Maybe the former looks so fired up because she is predicting a tie.

But what about Meryl Streep as Margaret Thatcher in another (sort of) period movie, The Iron Lady?

Albert Nobbs is Glenn Close’s sixth Oscar nomination. She was shortlisted five times in the ’80s, then all but disappeared from Oscar view. Close’s nominations were for the following:

Oldman was also shortlisted for the BAFTA Awards, but lost to fellow Oscar competitor Jean Dujardin for Michel Hazanavicius’ The Artist.

My Week with Marilyn Best Actress nominee Michelle Williams, for her part, has been nominated for two previous Academy Awards.

As for Gore Verbinski, he directed Best Animated Feature nominee Rango, whose chief voice actor is Johnny Depp – the star of Verbinski’s franchise-launching blockbuster Pirates of the Caribbean: The Curse of the Black Pearl.

The 2012 Academy Awards will be presented on Sunday, Feb. 26, at the Kodak Theatre at Hollywood & Highland Center. In the U.S., the Oscarcast will be broadcast live by ABC. 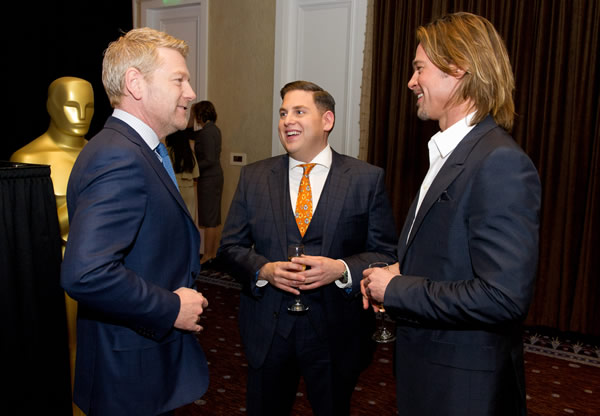 Kenneth Branagh was previously nominated for Henry V (1989) as Best Actor and Best Director, for the live-action short film Swan Song (1992), and for the adapted screenplay of Hamlet (1995), which he also directed/starred in, along with Julie Christie and Kate Winslet. Perhaps not so coincidentally, Laurence Olivier was a Best Actor nominee for Henry V (1946) and Hamlet (1948), both of which Olivier also directed. Hamlet was the year’s Best Picture winner, while Olivier took home the Best Actor Oscar.

The 2012 Academy Awards will be presented on Sunday, Feb. 26, at the Kodak Theatre at Hollywood & Highland Center. In the United States, the Oscarcast will be broadcast live by the ABC Television Network.

Dozens of nominees for the 2012 Academy Awards pose for a (very, very, very large) group photo at the Academy of Motion Picture Arts and Sciences’ Oscar Nominees Luncheon, held in Beverly Hills on Monday, Feb. 6, ’12. (Click on the image to enlarge it.)

This year’s Best Picture nominees are:

The 2012 Academy Awards will be presented on Sunday, Feb. 26, at the Kodak Theatre at Hollywood & Highland Center. In the U.S., the Oscar show will be broadcast live on ABC.

Nolte has been my favorite actor since his TV debut on “Rich Man Poor Man”. I only hope that he is taking care of his health so his fans get to see him win that Oscar soon. He makes every movie he is in outstanding. He is one of the best actors of our time..from the the 60’s to 2011. Please do it again, Nick…I want you to win one finally. A Nolte fan, Nancy King