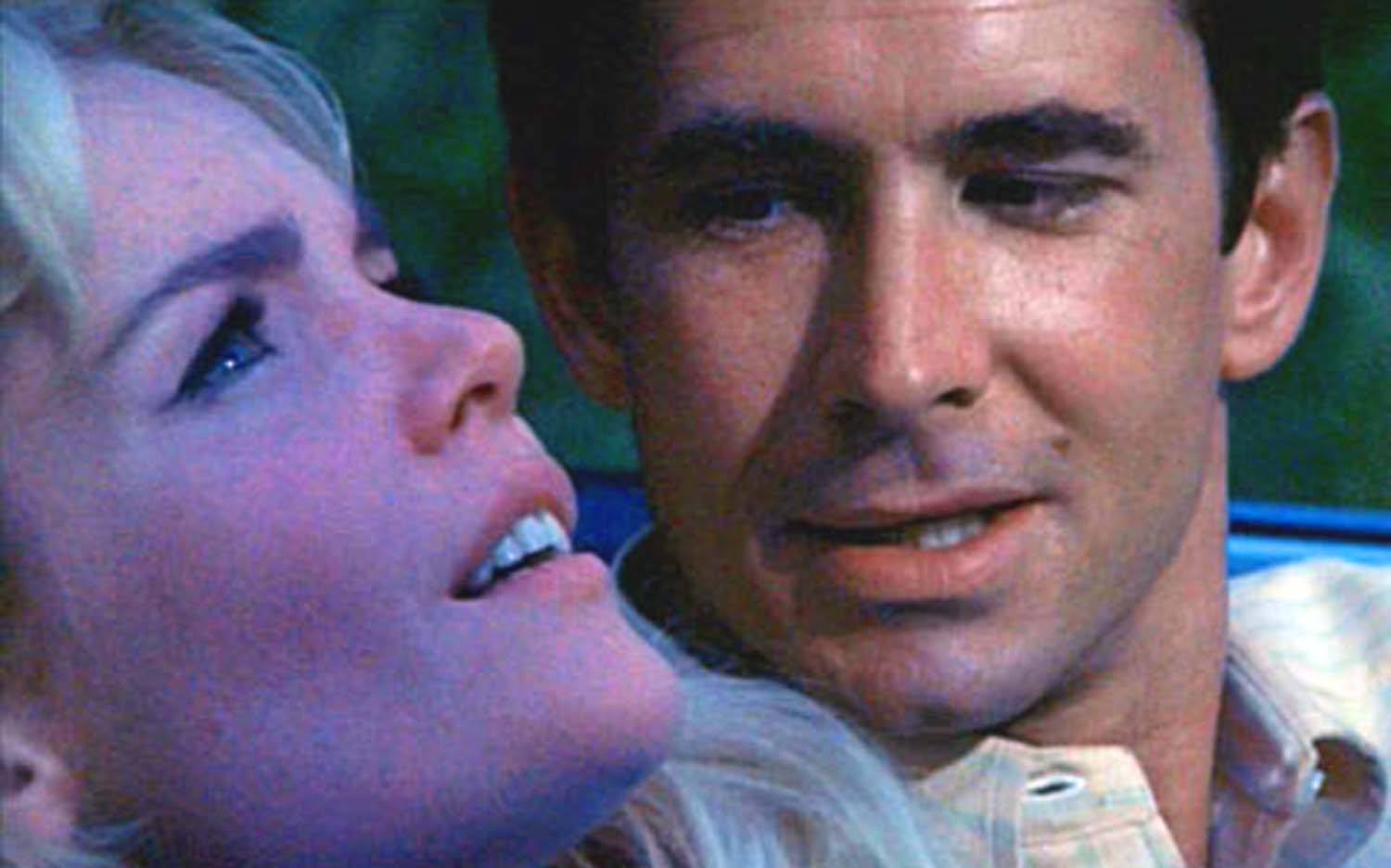 Prior to Pretty Poison, Noel Black earned praise for the 18-minute short film Skaterdater (1965), the tale of a boy skateboarder who falls for a girl bike rider. Shot on the beaches of Los Angeles County, the dialogue-less Skaterdater went on to win the Palme d’Or for Best Short Film and tied with Orson Welles’ Falstaff – Chimes at Midnight for the Technical Grand Prize at the 1966 Cannes Film Festival. Besides, Skaterdater received an Academy Award nomination in the Best Short Subject, Live Action category. (The Oscar winner that year was Claude Berri’s Le Poulet.)

Pretty Poison was 26-year-old UCLA film school graduate Noel Black’s first feature. Based on Stephen Geller’s novel She Let Him Continue, the psychological crime comedy-drama was adapted by 1960s Batman television series creator Lorenzo Semple Jr., and starred Anthony Perkins, in his first important Hollywood movie since Alfred Hitchcock’s Psycho (1960), and Tuesday Weld, better known up to that time as a spicier version of Sandra Dee, and as a mostly decorative leading lady for the likes of Elvis Presley (Wild in the Country), Frankie Avalon (I’ll Take Sweden), and Steve McQueen (Soldier in the Rain, The Cincinatti Kid).

Shot in Great Barrington, Massachusetts, Pretty Poison tells the story of a paroled felon and recovering arsonist (Anthony Perkins) who becomes involved with a much younger woman: a small-town blonde teenager (Tuesday Weld) who also happens to be awful pretty, sexually alluring, and a totally psychopathic all-American majorette. Their liaison leads to romance, adventure, and matricide, among other goodies.

Filming of Pretty Poison was a difficult task for first-time director Noel Black, who fell afoul of his New York-based crew, leading lady Tuesday Weld, and distributor 20th Century Fox, which felt the filmmaker was taking too long to get his film in the can. As found in Charles Winecoff’s Split Image: The Life of Anthony Perkins, cast member John Randolph recalled: “Noel knew how to set up shots, but he knew nothing about acting. Tuesday Weld was neurotic as hell. She would break down and cry. She hated the director, and she permitted that hatred to color everything she did.”

Anthony Perkins is supposed to have stepped in to assist the director, at one point providing guidance to Beverly Garland (Weld’s mother in the film), who gets shot dead at point-blank range. Garland, whose credits included B horror/sci-fi flicks such as Not of This Earth and It Conquered the World, would later remember, “I loved the part. I felt it was one of the best things I’d done.”

Anthony Perkins apparently was less thrilled with the final product. According to photographer Stephen Paley, who attended with Perkins a 1990 UCLA screening of Pretty Poison, the actor “only pretended to like the movie at the screening, but in the privacy of the car, driving home, he said, ‘That really was a piece of shit, so slow moving!'”

That’s too bad, as Perkins is quite convincing as Pretty Poison‘s Norman Bates-ish antihero – even though it’s 25-year-old Tuesday Weld who is the film’s big revelation and inveterate scene-stealer. In fact, Pretty Poison remains one of the few movies to have allowed the Sex Kittens Go to College actress to display her considerable talent.

Poorly distributed by 20th Century Fox and released the year after Arthur Penn’s epoch-making Bonnie and Clyde, Pretty Poison was thoroughly eclipsed by the Warren Beatty-Faye Dunaway blockbuster. (Ironically, Tuesday Weld had turned down the role of Bonnie Parker.) Yet, this Noel Black-Lorenzo Semple Jr. collaboration is in no way a second-rank Bonnie and Clyde copycat.

Instead, Pretty Poison – which earned Semple Jr the New York Film Critics Circle’s Best Screenplay Award – could be seen as a precursor to Terrence Malick’s Badlands (1973), starring Martin Sheen and Sissy Spacek as the murderously unstable lovers, and to the likes of John Hough’s Dirty Mary Crazy Larry (1974), with Peter Fonda and Susan George, and Steven Spielberg’s The Sugarland Express (1974), with Goldie Hawn and William Atherton. A more recent example of the genre is Oliver Stone’s Natural Born Killers (1994), with Woody Harrelson and Juliette Lewis. In these films, the young Menaces to Society aren’t gangsters or professional criminals, but “average” American youths committing murder and/or mayhem because, well, there’s always a good – if a wee bit warped – reason for doing so.

Without causing much of an impact, Pretty Poison was remade as a television movie in 1996. Directed by David Burton Morris, the TV version starred Grant Show, Wendy Benson-Landes, and Michelle Phillips in, respectively, the old Anthony Perkins, Tuesday Weld, and Beverly Garland roles.

Noel Black directed only a handful of movies for the big screen. Although a couple of those could, with quite a bit of good will, be considered “cult movie classics,” none of Black’s post-Pretty Poison films achieved anything resembling the prominence of his debut feature. Among these were:

Additionally, as per various online sources Noel Black shot the first half of 20th Century Fox’s 1980 marital farce A Change of Seasons. He was eventually replaced by Richard Lang, who received sole screen credit for the mediocre comedy starring Anthony Hopkins, Shirley MacLaine, Bo Derek, and Jennifer on My Mind‘s Michael Brandon. Another Jennifer on My Mind collaborator, Erich Segal, was one of A Change of Seasons’ credited screenwriters.

From the mid-’70s on, Noel Black’s career was basically restricted to television. Among his numerous efforts on that medium were the made-for-TV movies The Other Victim (1982), with William Devane as a man attempting to cope with his inner demons following the rape of his wife (Jennifer O’Neill); the family-reconciliation drama Promises to Keep (1985), starring veteran Robert Mitchum, son Christopher Mitchum, and grandson Bentley Mitchum, in addition to Tess Harper and Claire Bloom; and the “bisexual” psychological drama My Two Loves (1986), with Mariette Hartley as a woman torn between Lynn Redgrave and Barry Newman – but not allowed to make any really hard choices before the final fadeout.

Black also directed episodes from a number of TV series, including the crime dramas McCloud, Kojak, and Hawaii Five-O. Notably, he also directed a couple of episodes from the 1980s The Twilight Zone, in addition to Ron Howard and Amy Irving in the American Playhouse episode “The Hollow Boy” (1991). According to the IMDb, Noel Black’s final directing efforts were several episodes of the early ’90s series Swans Crossing, toplining Sarah Michelle Gellar.

Beverly Garland quote about her work in Pretty Poison via Tom Weaver’s Return of the B Science Fiction and Horror Heroes: The Mutant Melding of Two Volumes of Classic Interviews.