Besides Jennifer Lawrence, whose The Hunger Games: Catching Fire may turn out to be the biggest 2013 blockbuster in North America, The Dark Knight star Christian Bale, and Jack Huston (grandson of filmmaker John Huston), American Hustle features the following:

The Columbia-distributed American Hustle opens on Dec. 13 in limited release in the U.S.; it expands on Dec. 18. Moviegoers in most other countries will have to wait until early 2014, around the time of the announcement of the Oscar nominations.

Instead of David O. Russell, British filmmaker Steve McQueen was the NYFCC’s Best Director for the period drama 12 Years a Slave, based on real-life events about a black man (Chiwetel Ejiofor) who is kidnapped and sent to work in a slave plantation in the American South. Michael Fassbender, Brad Pitt, and Lupita Nyong’o are some of the film’s other players.

Four years ago, McQueen’s British-made Hunger, starring Fassbender, was the New York Film Critics’ Best First Film. This time around, McQueen himself became the first black filmmaker to be selected as the NYFCC’s Best Director.

As an aside, the first British filmmaker to top the NYFCC’s Best Director category was Alfred Hitchcock for The Lady Vanishes back in 1938 – in the awards’ fourth year. The first non-Caucasian Best Director was Ang Lee for Sense and Sensibility in 1995; Lee repeated the feat a decade later for Brokeback Mountain.

Note: Back in those days, there were only five Best Picture Oscar nominees per year.

In sum, American Hustle has a good chance of getting some Oscar love early next year. 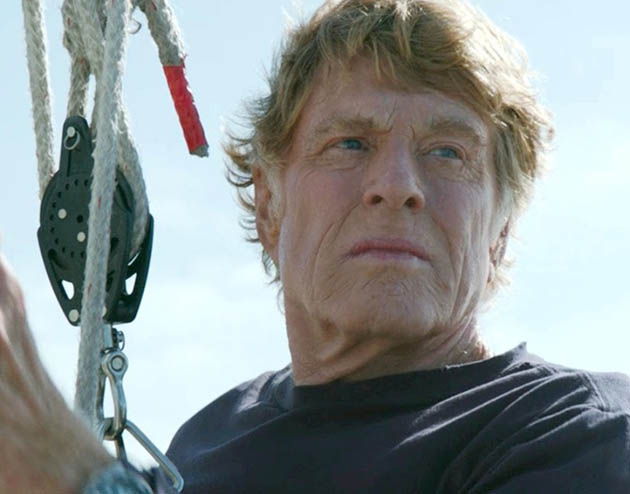 Robert Redford in All Is Lost. The NYFCC’s Best Actor winner was the star of J.C. Chandor’s one-man drama All Is Lost: Robert Redford, whose movie career dates back to Denis Sanders’ unusual 1962 war drama War Hunt (or, according to some sources, to an uncredited bit in Joshua Logan’s 1960 comedy Tall Story). Since then, Redford has been seen in a number of commercial and/or critical hits (The Sting, Out of Africa, Indecent Proposal), in addition to having directed several features, most notably Ordinary People and Quiz Show. Curiously, prior to All Is Lost Redford had never won an NYFCC award, though Quiz Show was the Best Picture in 1994.

After more than half a century as a film actor and more than three decades as a director, Robert Redford has won his first ever New York Film Critics Award – in the Best Actor category – for his performance in J.C. Chandor’s The Old Man and the Sea-ish adventure drama All Is Lost. In the film, Redford, adrift in the ocean, is seen all by himself on screen.

Back in 1969, Robert Redford landed in third place in the NYFCC’s Best Actor category for Michael Ritchie’s ski drama Downhill Racer (the winner was Jon Voight for Midnight Cowboy), while in 1980 he was once again third choice, this time in the Best Director category, for the family drama Ordinary People (the winner was Jonathan Demme for Melvin and Howard). Starring Donald Sutherland, Mary Tyler Moore, and Timothy Hutton, Ordinary People ultimately earned Redford an Academy Award.

Additionally, the Redford-directed Quiz Show was the NYFCC’s Best Film of 1994. However, that year’s Best Director was Quentin Tarantino for Pulp Fiction. (The Quiz Show win was reportedly a compromise between warring Pulp Fiction and Forrest Gump factions.)

Bear in mind that even at age 77, Robert Redford is not the oldest New York Film Critics Best Actor winner. Richard Farnsworth was 79 when he was named the NYFCC’s Best Actor for David Lynch’s The Straight Story in 1999.

And in case Redford does get shortlisted for the 2014 Academy Awards, that’ll be the second-longest gap ever between Oscar nominations in the acting categories. To date, Redford has received a single Oscar nod, for George Roy Hill’s blockbuster and eventual Best Picture winner The Sting, forty years ago.

Apparently, the Hollywood Foreign Press Association isn’t the only awards season group that enjoys honoring movie stars. Both in the lead and supporting categories, this year the New York Film Critics have selected only well-known Hollywood names: besides Robert Redford and Jennifer Lawrence, their other picks were Cate Blanchett and Jared Leto.

Cate Blanchett was the NYFCC’s Best Actress for Woody Allen’s comedy-drama Blue Jasmine, in which the Oscar 2014 favorite plays a character with several elements in common with Vivien Leigh’s Blanche DuBois in Elia Kazan’s A Streetcar Named Desire. Leigh was both the New York Film Critics’ and the Academy Awards’ Best Actress of 1951.

In case Cate Blanchett comes out on top at the Academy Awards, that’ll be her second Oscar statuette. At the 2005 ceremony, she was named Best Supporting Actress for her portrayal of multiple Best Actress Oscar winner Katharine Hepburn in Martin Scorsese’s Howard Hughes biopic The Aviator.

Despite all that Oscar love, Blue Jasmine marks Blanchett’s first NYFCC win. Of note, in 2007 she was the Best Supporting Actress runner-up for playing one of several Bob Dylan characters in Todd Haynes’ I’m Not There. (The winner that year was Amy Ryan for Ben Affleck’s mystery thriller Gone Baby Gone.)

The NYFCC’s fourth Best of 2013 movie star is Jared Leto, the Best Supporting Actor for his work in Jean-Marc Vallée’s Dallas Buyers Club, in which he plays an HIV-positive trans woman smuggling AIDS medication into the U.S. during Ronald Reagan’s presidency, a time when the Food and Drug Administration refused to make available potentially life-saving alternative treatments for the deadly disease.

Jared Leto is supposed to have lost 30 pounds for the role – the sort of physical transformation that not infrequently earns actors accolades and awards. His Dallas Buyers Club co-stars are Matthew McConaughey (the NYFCC’s 2012 Best Supporting Actor winner for Magic Mike and Bernie), Jennifer Garner, and Steve Zahn.

By the way, the New York Film Critics’ penchant for honoring Hollywood stars is hardly something new. In the last five years, the winners in the acting categories were the following:

Sally Hawkins and Christoph Waltz – though the latter cast in a major Hollywood box office hit (Inglourious Basterds) – and to a lesser extent Jessica Chastain (in 2011, when she was seen in about 2,000 films), are the only exceptions to the NYFCC’s Hollywood infatuation. (Mo’Nique may not be or have ever been a movie star, but she remains well known as a television actress/personality.) 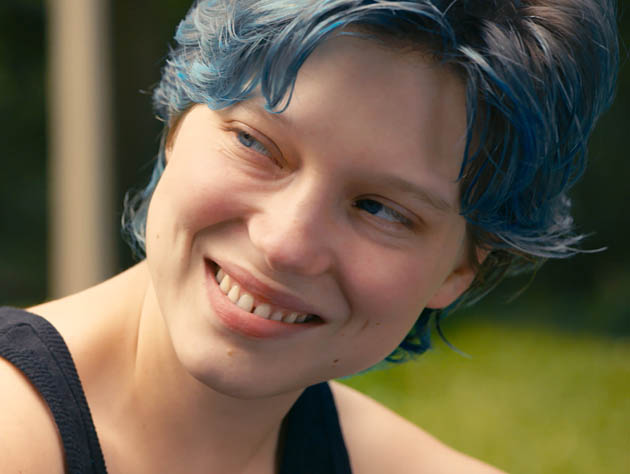 Starring Adèle Exarchopoulos and Léa Seydoux as, respectively, a blue-haired aspiring painter and a dark-haired teenager who become romantically and sexually involved, the French-made drama is ineligible for the 2014 Best Foreign Language Film Oscar as a result of Academy rules regarding release dates in the submitted films’ country of origin. (France has sent in instead Gilles Bourdo’s Renoir.)

On the bright side, Blue Is the Warmest Color can be shortlisted in other Oscar categories.

The NYFCC’s Best Non-Fiction Film was Sarah Polley’s Stories We Tell, in which actress-turned-documentarian offers an unusual (and widely praised) glimpse into her parent’s complex marriage. Along the way, she reveals that her actual father is Harry Gulkin, with whom her mother, actress and casting director Diane Polley (of the TV series Street Legal), had an extra-marital affair. Gulkin produced Jan Kadar’s Jewish family drama Lies My Father Told Me, nominated for the 1975 Best Original Screenplay Academy Award.

Although Stories We Tell premiered at the 2012 Venice Film Festival and opened in Canada later that year, the Roadside Attractions-distributed documentary is eligible for the 2014 Academy Awards, as it was released in the U.S. in May 2013. In fact, it’s one of 15 films still in contention for next year’s Best Documentary Feature Oscar.

Stories We Tell has already won Best Documentary honors from the Toronto Film Critics Association and the Directors Guild of Canada, in addition to taking home the Canadian Screen Award (formerly known as the Genie Award) in that category.

In 2007, Sarah Polley’s Away from Her, starring Julie Christie as an Alzheimer’s disease patient and Gordon Pinsent as her husband, was the New York Film Critics’ Best First Film. 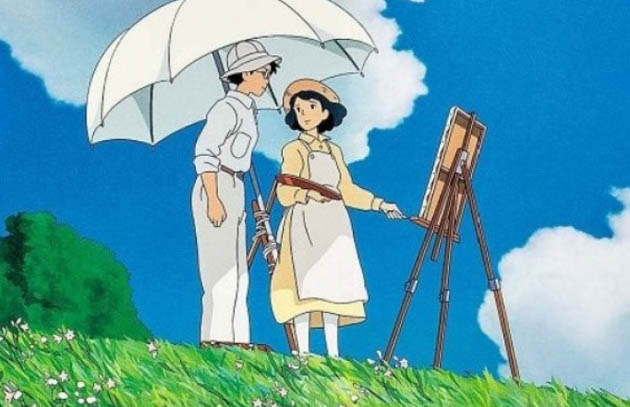 The Wind Rises. A fictionalized biopic of Jiro Horikoshi (1903–1982), the designer of fighter aircraft used by Japan during World War II, Hayao Miyazaki’s The Wind Rises was the New York Film Critics’ Best Animated Feature of 2013. The film was also the year’s biggest hit at the Japanese box office ($119.51 million) and a controversial topic of conversation, as its perceived antimilitaristic stance irked Japan’s right-wing nationalists. The Wind Rises is also supposed to be the last movie in Miyazaki’s career, as the filmmaker has recently announced his retirement.

Hayao Miyazaki’s swan song ‘The Wind Rises’ a year ahead?

Hayao Miyazaki’s The Wind Rises, a major blockbuster in Japan ($119.51 million according to Boxofficemojo.com) despite – or perhaps because of – a right-wing backlash against the film’s anti-war stance, was the New York Film Critics Circle’s Best Animated Feature of 2013. The Wind Rises beat better known U.S.-made fare such as Disney’s Frozen, currently in theaters.

Miyazaki has vowed that he has retired from filmmaking; if true, The Wind Rises will be his last film. Via its Touchstone Pictures banner, Walt Disney Studios will be releasing The Wind Rises next Feb. 21 in North America.

Now, how could a 2014 movie (in the U.S.) get a 2013 award from the NYFCC, better known for honoring movies a year (or more) after everybody else (e.g., Stevie, The Lives of Others) and, notably, a three-decade-old release (Army of Shadows)?

That’s simple: The Wind Rises had a one-week Oscar-qualifying run in Los Angeles and New York City back in November.

Chronicling the last day in the life of Oscar Grant (played by Michael B. Jordan), a black man shot dead by white San Francisco police officer Johannes Mehserle on New Year’s Day 2009, Fruitvale Station was the NYFCC’s choice for Best First Film of 2013.

Three-time Academy Award nominee Bruno Delbonnel (Amélie, 2001; A Very Long Engagement, 2004; Harry Potter and the Half-Blood Prince, 2009) has won his first NYFCC Best Cinematography award. Delbonnel was singled out for his work on Joel and Ethan Coen’s Inside Llewyn Davis.

And finally, the NYFCC’s Special Award went to veteran documentary filmmaker Frederick Wiseman, who’ll turn 84 next Jan. 1. Wiseman’s Titicut Follies (1967), a disturbing look at a Bridgewater, Massachusetts, Correctional Institution for the mentally ill, was banned in the United States until 1992.

The reason they didn’t change their releases date in France was financial. It was the best time of the year to open the movie in that country — where it’ll make the most money, undoubtedly.

Wild Bunch founder Vincent Maraval told Deadline.com: “There was never any question for us to modify in any way our release strategy to legitimize the stupidity of the Oscar rules. Should we risk our strategy for France for a Foreign Language Film Oscar which doesn’t add anything to a Palme d’Or?”

And it’d make no sense for them to believe that NOT getting a Best Foreign Language Film nod would somehow increase their film’s chances of getting nominations in other Oscar categories. All they needed to do was look at last year’s AMOUR. What he meant was that the other categories (Best Picture, Acting, etc.) are the ones that count (from a publicity/financial standpoint.)

I could be wrong, but double check that it is Academy rules about opening dates for Blue is the Warmest Color that is the issue here.  My understanding is that the producers and director had the opportunity to change their opening date to earlier in France and chose not to because they thought not doing so would give them a better chance at Oscar noms like Best Picture (assuming that France would have chosen the film for their entry, which they probably would have).