Spencer’s Best Supporting Actress competition consisted of Jessica Chastain for The Help, Janet McTeer for Rodrigo García’s Albert Nobbs, Bérénice Bejo for Michel Hazanavicius’ The Artist, and Melissa McCarthy for Paul Feig’s Bridesmaids. Of these, only McTeer had a previous Oscar nod: in the Best Actress category for Gavin O’Connor’s Tumbleweeds (1999).

Below is a partial transcript of the q&a with the media following Octavia Spencer’s Oscar win. (Courtesy of AMPAS.)

Q. Congratulations. Obviously you must be so thrilled with this win. I was looking at some of the deleted scenes from the film and there was one scene where your character was at the bus stop and she was obviously beat up.

Q. Are you disappointed that perhaps the film didn’t include that more tragic ending for your character, although it had some low points, it had some, you know, a little bit of a light-hearted feel at the end?

A. Well, I think that’s all in your perception. No, I’m not disappointed that that scene was deleted. I think that we wanted to make the movie that Kathryn Stockett had envisioned when she wrote the book.

I don’t think there’s anything light-hearted about the Civil Rights movement, but somehow it makes it palatable when you see that type of strife. So if you can have a laugh every other ten minutes while you watch the struggle then, you know, I have no problem with it. But no, I’m not disappointed with any aspect of the film.

Q. There’s something that stuck out to me in your acceptance speech and you thanked your Help cast for how they helped you to transform into your character.

A. I said that? I don’t even remember what I said. I’m sorry.

We just left our egos at the door and worked together as one beautiful unit from Emma, Viola, Bryce, Allison Janney. I mean, it was an award-winning cast. So to be a part of that and to just sort of dissolve into the world that we were representing is something that we’re supposed to do as actors but it was rare that we did it without judgment with each other.

Q. You originally spoke about overcoming fear in playing your role in The Help. What would you say to a young man or woman about to start in the Army and overcoming their fears?

A. Well, I haven’t really overcome mine. I’m scared to death right now. You know, I don’t take what men and women in uniform do lightly. You guys provide us with the freedoms and the protection that we as citizens sometimes take for granted, so I don’t know that I’m the person that can say because I’ve not served in that capacity. What I will say is I think I guess I’m reminded of Emerson: Do not go where the path may lead; go instead where there is no path and leave a trail. That’s what you guys do for us every day. 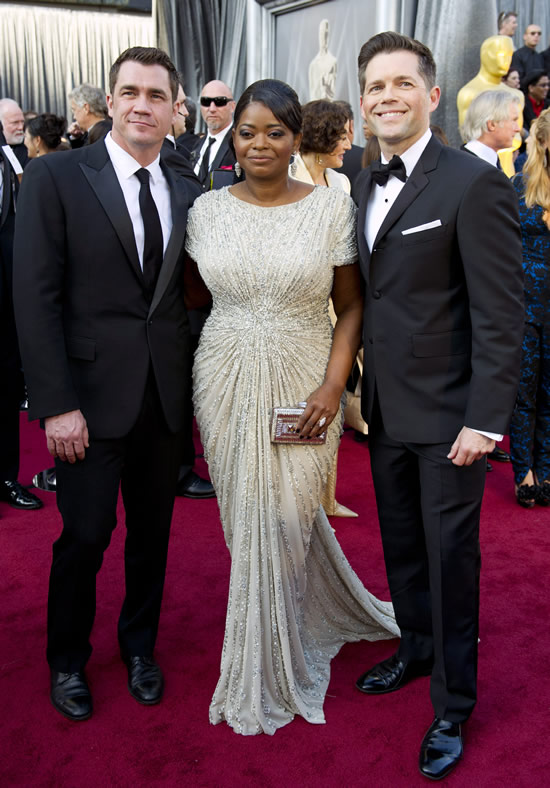 Q. Would you sum up this award season for us and tell us about the love affair you had with The Help?

A. Well, the word I want to use I can’t, it’s a word in the well, I want to say fan-effing-tastic. But we’ll just leave the effing out. Fantastic. It is – it is humbling. It is the love affair I’ve had with The Help. I am – I’m a benefactor of all of the riches that the real life Minnys, Aibileens, Constantines, Skeeters, Celias, that they basically repeated. And so I am – I’m very humble because I get to stand here and accept this award and I haven’t really done anything. So I don’t know. That’s a tough question to answer. Sorry.

Q. The L.A. Times recently put an article out that showed that after about six months of research that the Academy was mostly white men. Something like 94 percent white, 77 percent male and mostly over the age – of median age of 62. I was wondering what your thoughts were about that?

A. I don’t really have any thoughts about it. It’s not something that I’ve thought about. I wish I could be more eloquent, elegant in answering that question. But it’s just I don’t know.

Q. I was wondering … what your thoughts are if there’s a way for the Academy to more proactively work towards…

A. I can’t tell the Academy what to do, honey. They just gave me an Oscar. I just hope they continue to do what they do. I just am not the person to ask that question. I really don’t know. I have no wisdom there. I’m sorry.

Q. You said in your speech … that Steven Spielberg changed your life, and I just want to know if you can expound and expand on how he did that in your life?

Well, Steven Spielberg is a luminary, and as far as I can remember in filmmaking, he is – every decade of my life [he] has been creating brilliance. And he has this little studio called DreamWorks that could have put any zaftig actress with acting chops in my role, but he allowed my dear friend, Tate Taylor, to cast me pretty much unknown to most of you in that role when there were so many others that could have been chosen. And that’s the sign of a true filmmaker … to do what he does. So he and Stacey Snider changed my professional life, and getting the opportunity to play this role changed [my] life personally as well.

Q. Congratulations. Tate was your date, too, right?

A. Well, absolutely. But now I have a different date. 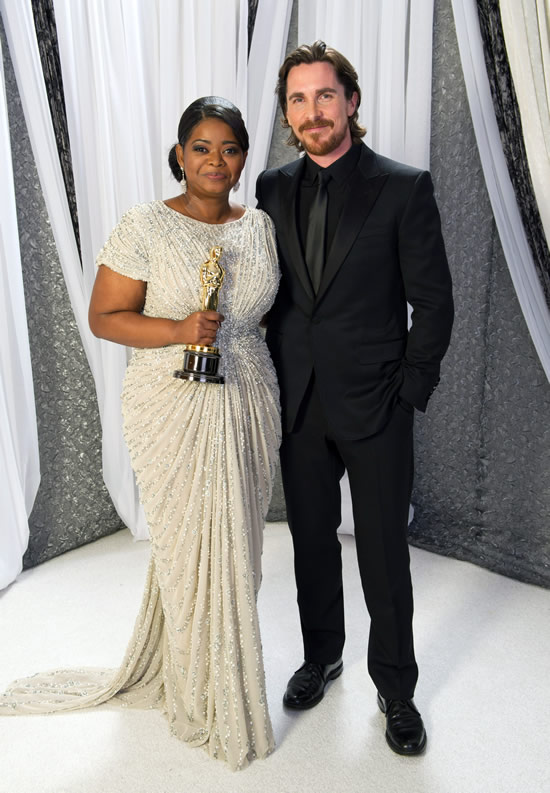 Q. My question to you is, is that when you were walking up those stairs and by the time you got up there, a heartfelt standing ovation was given to you and you went into strictly [?] emotions. What were you feeling at that moment and what would you say to any young girl who would aspire to be in your shoes tonight?

A. Well, get a great designer because you don’t know if you’re going to be on TV or not. And really and truly, I was just trying not to fall down because I had an incident where I fell at an awards show. This is one of those evenings in my life that I’ll never forget.

I hope it’s the hallmark of more for young aspiring actresses of color, and by color I don’t mean just African American. I mean Indian, Native American, Latin American, Asian American. I hope that in some way that I can be some sort of beacon of hope, especially because I am not the typical Hollywood beauty. You guys are supposed to go, oh, no, you are.

There’s crickets, guys, work with me here. Work with me.

No, I don’t know. I just think that you have to believe in yourself and you have to work very hard. You can’t ever think that you’re the best thing since sliced bread because I promise you, there are going to be Viola Davises and Jessica Chastains and Emma Stones who are the best thing since sliced bread. So take it seriously, but don’t take it too seriously.

Q. The outpouring of emotion tonight for you and for your movie has been overwhelming, especially considering that you’re a relative newcomer.

A. Well, it depends on who you ask. Fifteen years, I’m a newcomer. Okay, I’ll take it.

Q. Can you explain why you think that room responded the way that they did tonight to your name being called?

Q. This is going to open so many doors for you. In your wildest dreams what is the one role that you want to play?

A. I don’t have one role that I want to play. I guess you know what, I want to be a producer. I want to be an activist. I want to be proactive in bringing about work for men, women, boys, girls, everybody who is good at what they do and deserve a shot at it.

So I think my role – I want to have a presence both behind the scenes and in front of the camera. So I can’t say any one particular thing, so I’ll just name them all. I’ll be the jack of all trades and hopefully decent at one of them. 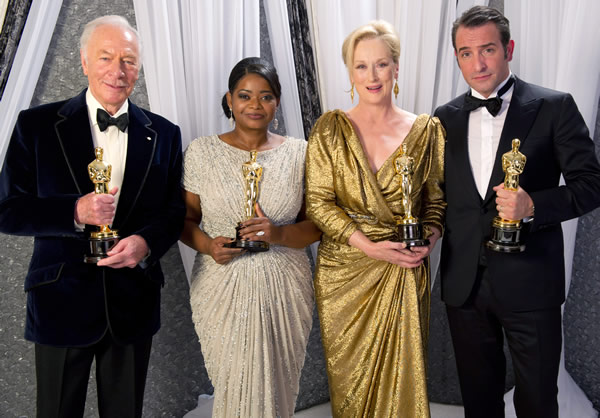 Meryl Streep has been nominated 17 times. Her competitors in the Best Actress category were two-time nominee Viola Davis for The Help, three-time nominee Michelle Williams (as Marilyn Monroe) for My Week with Marilyn, first-timer Rooney Mara for David Fincher’s The Girl with the Dragon Tattoo, and six-time nominee Glenn Close for Albert Nobbs.

Correction: We initially had Marion Cotillard winning an Oscar for Ma Vie en Rose. The typo resulted in the casting of Cotillard in a Franco-Belgian comedy-drama about tolerance – instead of the Edith Piaf biography that made her an international star.

Kenneth Branagh, Oscar-nominee for Performance by an Actor in a Supporting Role for Simon Curtis’ My Week with Marilyn – in which Branagh plays Laurence Olivier during the making of The Prince and the Showgirl with Marilyn Monroe – Lindsay Brunnock, Natalie Portman, and Benjamin Millepied at the 2012 Academy Awards held at the Hollywood and Highland Center on February 26. [The back of George Clooney’s head can be seen on the right; behind Natalie Portman are Antonio Banderas and Melanie Griffith’s hair.] (Image: Richard Harbaugh / © A.M.P.A.S.)

Kenneth Branagh was previously nominated for Oscars for Henry V (1989) as Best Actor and Best Director, for the live-action short film Swan Song (1992), and for the adapted screenplay of Hamlet (1995), which he also directed/starred in, alongside Julie Christie and Kate Winslet. Perhaps not coincidentally, Laurence Olivier was a Best Actor nominee for Henry V (1946) and won the Best Actor Oscar for Hamlet (1948), both of which Olivier also directed.

As in recent years, the ceremony will take place at the Hollywood & Highland Center in Hollywood. In the United States, the Oscarcast will be presented live by the ABC Television Network. Movie fans in more than 225 countries – did you know the world had that many nations? (the UN has 192 members) – will be able to watch the Oscars 2013 as well.

This year, there were nine Best Picture nominees. The Oscar 2012 contenders were the following:

The Artist was the year’s Best Picture winner, and so were director Michel Hazanavicius and actor Jean Dujardin. Meryl Streep was the Best Actress for her portrayal of Margaret Thatcher in Phyllida Lloyd’s The Iron Lady. Christopher Plummer was Best Supporting Actor for Mike Mills’ Beginners, while Octavia Spencer was Best Supporting Actress for Tate Taylor’s The Help. The Best Screenplay Oscars went to Woody Allen for Midnight in Paris (original) and Alexander Payne, Nat Faxon, and Jim Rash for The Descendants (adapted). Asghar Farhadi’s A Separation was the Best Foreign Language Film winner.