Olivia de Havilland is the subject of an interview published in the London Evening Standard about a week ago. The piece is a must-read. Discussed are de Havilland’s youth, her early years in Los Angeles, Errol Flynn, Gone with the Wind, the Academy Awards, and – tangentially – her relationship with sister Joan Fontaine.

“It is hard, very hard, to believe she is 93,” says interviewer Hermione Eyre. “Only the glorious vintage of her gossip gives it away. ‘I saw Norma Shearer dancing with [her Romeo and Juliet co-star] Leslie Howard and I thought, “I wonder what her husband [MGM former second-in-command Irving G. Thalberg] thinks about that…”‘ Sometimes she confides regret: ‘For two weeks after I lost out on that Oscar, I didn’t believe in God…’ and briefly, when I ask whether she might one day be reconciled with her sister, the actress Joan Fontaine, she shows the pain of an ongoing family feud. ‘Better not,’ she says, smiling through gritted teeth. ‘Better not.'”

Further down the piece, there’s the following paragraph referring to Joan Fontaine:

“The death of their mother in 1975 and the publication of Joan’s poisonous memoir in 1978 estranged them fully, which has proved the best option for Olivia. ‘I got that solution from reading a wonderful little agenda [diary]. Every page had a profound quotation from a saint or a philosopher, and one day I turned a page and it said: “Avoid destructive people.” I thought, “That’s marvellous, and moral, too. If you are faced with the source of an insoluble problem, one that is useless and painful and destructive, well, avoid it.” Avoidance is a non-destructive, benevolent solution.'”

The Oscar de Havilland lost that made God less godly for a couple of weeks was the Best Supporting Actress Academy Award that went to Hattie McDaniel for Gone with the Wind.

Two years later, she would lose another Oscar. Adding insult to injury, she lost the 1941 Best Actress Oscar to none other than Joan Fontaine in Suspicion. (De Havilland was in the running for Hold Back the Dawn.)

De Havilland would eventually receive two Best Actress Academy Awards: for To Each His Own (1946) and The Heiress (1949).

When Fontaine came to compliment de Havilland following her To Each His Own victory, de Havilland turned her back on her sister. “I don’t know why she does that when she knows how I feel,” de Havilland later told her press agent, Henry Rogers.

Variety reported that “Joan stood there looking after her with a bewildered expression and then shrugged her shoulders and walked off.”

The above quotes are found in Damien Bona and Mason Wiley’s Inside Oscar.

Louis Jourdan is Turner Classic Movies’ star of the evening, which has just kicked off with a showing of Vincente Minnelli’s 1958 multiple Oscar-winning musical Gigi, co-starring Leslie Caron and Maurice Chevalier.

But the highlight of the Louis Jourdan evening comes later, with the 7:15 p.m. (Pacific Time) TCM premiere of Max Ophüls’ haunting Letter from an Unknown Woman, a 1948 romantic drama that ranks among not only the greatest movie romances ever, but also among the greatest motion pictures ever made, period.

The only reason I don’t call Letter from an Unknown Woman Max Ophüls’ masterpiece is because Ophüls also directed the sublime Madame De (1952) and the revered Lola Montes (1957). An individual is only allowed one single masterpiece.

Starring Joan Fontaine as the “unknown woman” of the title, Letter from an Unknown Woman is a tale of unrequited love – or passion or madness or obsession or all four (and more) rolled into one. Jourdan doesn’t have all that much to do in the film, except look classy and aloof. He fits the part perfectly.

Now, if Ophüls’ camera work, Howard Koch’s screenplay adaptation of Stefan Zweig’s story, Franz Planer’s superb cinematography, and Daniele Amfitheatrof’s memorable score give the film its mood and ambiance, it’s Joan Fontaine who gives Letter from an Unknown Woman its soul. Fontaine’s performance as a woman gone mad with yearning and desire is nothing short of extraordinary.

Unfortunately, Letter from an Unknown Woman wasn’t a hit at the time of its release. Needless to say, the film wasn’t nominated for a single Academy Award. That’s the Academy’s loss. Don’t miss it tonight.

As an aside: Letter from an Unknown Woman has quite a bit in common in terms of plot, mood, lighting, and atmosphere with Jacques Feyder’s 1931 romantic drama Daybreak, itself based on a novel by Arthur Schnitzler. Turner Classic Movies shows it every now and then; though inferior to Ophüls’ drama, it’s well worth a look thanks to Feyder’s sensitive direction, Merritt B. Gerstad’s cinematography, and Ramon Novarro’s performance in a role akin to that of Louis Jourdan in the 1948 film.

There have also been other film versions of Stefan Zweig’s story. I’ve only seen one other: Only Yesterday, in which John Boles is the man who forgets and Margaret Sullavan the woman who doesn’t. Sullavan is excellent in the role, but this modernized, American-set version lacks the European atmosphere of the remake. Only Yesterday was directed by melodrama expert John M. Stahl in 1933. 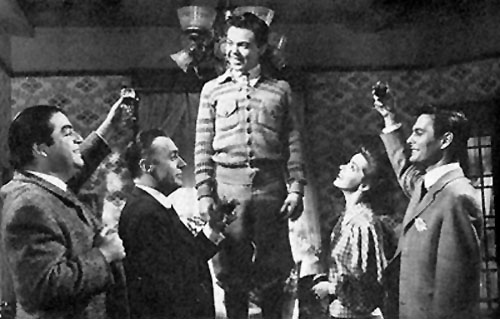 While I’m at it, make sure to catch Richard Fleischer’s nostalgic 1952 comedy-drama The Happy Time, which stars Louis Jourdan, Charles Boyer, Bobby Driscoll, and Marsha Hunt, right at the time her film career was ruined by the anti-Red hysteria of the 1950s.

Julie (1956), with Jourdan as a total psycho and Doris Day piloting a plane, is as entertaining as it sounds. (I guess that could go both ways.)

I haven’t watched Dangerous Exile, but considering its cast – Jourdan, Belinda Lee, Keith Michell – it should be worth a look.

Right after that there’s a non-Louis Jourdan movie: Cottage to Let, Anthony Asquith’s 1941 mystery-thriller starring Leslie Banks, John Mills, Alastair Sim, and a young Michael Wilding (later one of Elizabeth Taylor’s husbands). I’m no fan of Leslie Banks, whom I usually find way over the top, but Mills and especially Sim make Cottage to Let a must-see.

I think its sad and highly immature that these two legends who are both nearly 100, can’t call a truce and try to bring about a reconciliation. I bet they were great role models to their own children (sarcasm). How petty and sad. I myself am 72 years old and an only child, and I was always envious of my friends and cousins who had sisters and brothers. I myself am the proud father of 5, grandfather of 3, and great-grandfather of 3, and I have always stressed to my kids the importance of keeping family ties strong. I hope that’s a lesson that these ladies eventually heed before it’s too late.

Joan was not in Europe at the time of Lilian Fontaine’s death. She was in a play somewhere in the U.S. but unable (or unwilling) to get out of her play contract to attend the ceremonies. Olivia had come over from Europe and had decided not to postpone the services for Joan. A misunderstanding developed with Joan not being notified properly and caused increased bitterness between them.

These two sisters could never get along-but placing all the blame on Olivia is wrong. As Joan’s ex-husband William Dozier said of Joan’s book “No Bed of Roses,” it should have been called “No Shred of Truth.”

Joan always painted herself as the victimized sister in the shadow of the more popular Olivia. I’m on Olivia’s side in their feud. She has decided that the best advice she got recently was from a pamphlet that advised, “Avoid destructive people.” Therefore, she’s decided staying apart from Joan is best for both of them. Good thing there’s an ocean between de Havilland and Fontaine! No love lost. Obviously, there will never be a reconciliation.

Does Miss de Havilland believe that she gave a better performance than Hattie McDaniel’s in “GWTW”? I think not.

I have read quite a lot on the feud between these two sisters. I find it extremely sad that they cannot reconcile. After all, God commands forgiveness in scriptures. If we do not forgive another, God says He cannot forgive us. How can we say we love God, whom we haven’t seen, and not love those we have? I am not a judge, and I’m surmissing here, but I do see things in Joan’s favor. I read (and believe) that Olivia treated Joan horribly as a child. She was jealous because she had to give up attention to a younger sister that was born. She used to mock Joan in front of their stepfather, who went along with it and never corrected it. This was ongoing all of Joan’s young life. Can we then fault Joan for being so deeply hurt? After that, if Joan was willing to befriend her sister as an adult, why can Olivia not forgive the one she has injured? It would seem to me that Olivia has had no concept of the injury she caused and therefore isn’t repentant of it. Maybe that is what has created her blindness to it. By their quite elderly ages, it’s just a shame and may I say sin (which God really says) that Olivia can’t forgive. So who is the destructive one? I think it was Olivia initially, whom it seems initiated destructive in her sister’s life. I find it amazing that people can be so blind to their own wrongs but see all the wrongs in another. Very sad situation indeed because I believe the way we live here is how we will live beyond this life. We can’t take unforgiveness to Heaven. So where will Olivia end up? I pray that one day her eyes will be opened before it’s too late. What a sad life, to live all of these long years they’ve had and not love their own flesh and blood?

Lilian Fontaine resided with my aunt in the early 1960’s in Los Gatos, California. In was Joan who was sending monthly cheques to her mother. In late 1974, Mrs. Fontaine developed pancreatic cancer; she had retired to an assisted living place in Santa Barbara, where Brian Aherne visited her a week before she died. Brian said she was as yellow as a guinea. Miss de Havilland joined the executor (Mrs. Loftus) in the final arrangements as JF was in a play in the East (not Europe). I am afraid I stand with Joan who felt an autopsy was unnecessary when it was perfectly obvios what she had died of.

This article leaves it to ones imagination as to what the discourse of the two sisters “avoidance” was.
When their mother Lillian died in 1975 Joan was in Europe doing a play. And wanted Olivia to hold off on the memorial until she could get out of her contract and return. (show business) But Olivia refused and buried their mother before Joan could return. That was the important event that caused the irreparable damage in their relationship.

Though at one time I heard Joan say to a reporter that their relationship was not as bad had been reported in the press. She would not elaborate though.

As for a reconciliation I do think that the sisters are / have been victims of an overzealous “PRESS” in the past, making it more difficult for a public reunion. If there ever stood the chance of a recovery it’s probably long passed.

What a wonderful picture it would be to have them sitting side by, putting put the past behind them. It would be a lesson to us all and a blessing to these two dear ladies of the American Screen.

She deserved an Oscar, but not for Gone With the Wind. How did Rhett Butler die? it’s never been written until now! http://www.deathofrhett.blogspot.com