Olivia de Havilland on TCM: Your chance to watch The Adventures of Robin Hood for the 384th time

On the other hand, you’ll be able to catch for the 384th time a demure Olivia de Havilland being romanced by a dashing Errol Flynn in The Adventures of Robin Hood, as TCM shows this 1938 period adventure classic just about every month. But who’s complaining?

One the greatest period adventure movies ever

A $2 million (approx. $34 million today) production directed by Michael Curtiz and William Keighley – Curtiz reportedly took over after producer Hal B. Wallis decided Keighley’s direction lacked verve – The Adventures of Robin Hood is one of the very best period adventure movies ever made. Perhaps the very best, right up there with the Rouben Mamoulian-Tyrone Power version of The Mark of Zorro.

As a plus, The Adventures of Robin Hood boasts a magnificent score by Erich Wolfgang Korngold, gorgeous color cinematography by Sol Polito and Tony Gaudio (Polito was hired along with Curtiz), and flawless supporting performances by the likes of inveterate scene stealers Claude Rains, Una O’Connor, and Basil Rathbone (who also locked swords with Tyrone Power in The Mark of Zorro). 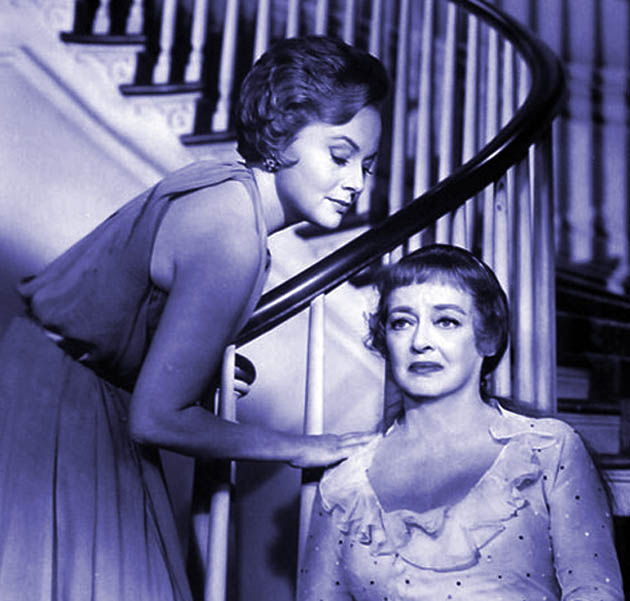 Back in the ’20s, ’30s, and ’40s you had screen teams John Gilbert and Greta Garbo, Ramon Novarro and Alice Terry, William Powell and Myrna Loy, Alan Ladd and Veronica Lake, Marie Dressler and Polly Moran, and Katharine Hepburn and either Cary Grant or Spencer Tracy.

In the ’60s, you got Sophia Loren and Marcello Mastroianni, Liv Ullmann and Max von Sydow, Elizabeth Taylor and Richard Burton, and, almost … Bette Davis and Joan Crawford.

Thematically speaking a spin-off of his 1962 sleeper hit What Ever Happened to Baby Jane? – plus some ripping off from Henri-Georges Clouzot’s Diabolique – Robert Aldrich’s 20th Century Fox release Hush Hush Sweet Charlotte (1964) was supposed to to have reunited Baby Jane stars Bette Davis and Joan Crawford. However, for reasons never fully explained, Crawford, claiming illness and delaying production, eventually had to be replaced.

In What Ever Happened to Robert Aldrich?: His Life and His Films, Aldrich biographer Alain Silver explains:[1]

Having ruled out or been turned down by Vivien Leigh, Loretta Young and Barbara Stanwyck, Aldrich flew to a remote resort in Switzerland and somehow cajoled Olivia de Havilland, the last acceptable actress, into taking over the part. ‘I spent four terribly difficult days with all the persuasion I could command … I don’t believe half of the things I said myself; but I knew there was no other place to go. If I came back without de Havilland, we wouldn’t have a picture, because we had gone through all the other people that Fox would live with.’

Enter a reluctant Olivia de Havilland, who had previously been featured opposite Bette Davis in three movies back in their Warner Bros. days: Archie Mayo’s It’s Love I’m After (1937), Michael Curtiz’s The Private Lives of Elizabeth and Essex (1939), and John Huston’s In This Our Life (1942) – all shown on TCM today.

This is what de Havilland had to say about Aldrich’s casting coup, as quoted in What Ever Happened to Robert Aldrich?:

I always thought it would be fun if [Bette Davis and I] could work together. Then, I was offered the chance to work with her on the film that became Hush Hush Sweet Charlotte when Joan Crawford withdrew. I knew Bette wanted badly to work, and [What Ever Happened to Baby] Jane had been such a success that Bette was quite anxious. They had to find the replacement, and Bette wanted me.

The problem was I wasn’t as anxious to work as she was. I didn’t need to. I wasn’t thrilled with the script, and I definitely didn’t like my part. I was reverse-typecast, being asked to be an unsympathetic villain. It wasn’t what people expected of me. It wasn’t really what I wanted to do.

Bette wanted it so much, so I did it. I can’t say I regretted it, because working with her was special, but I can’t say it was a picture I am proud to put on my resume. Given the choice, I wouldn’t have deprived Joan Crawford of the honor.

It’s really too bad that Crawford and Davis didn’t get to join forces – or lock horns – once again in Hush Hush Sweet Charlotte, but de Havilland delivers a compelling performance in this entertaining and efficacious Gothic thriller that would add luster to any performer’s resumé.

The Proud Rebel (1958) paired up Olivia de Havilland with Alan Ladd, Paramount’s top male star in the mid-to-late ’40s – but by the late ’50s fast on his way down. A handsome man in the previous decade, Ladd’s looks were all but gone by the time he reached 40 earlier in the ’50s (alcoholism was reportedly to blame). A more effective actor than most critics give him credit for, it’s unfortunate that he didn’t get to play the James Dean role in George Stevens’ Giant.

Guy Green’s Light in the Piazza (1962) is a good-looking, perfectly watchable, and utterly absurd drama about both mental and emotional handicaps. Olivia de Havilland plays the mother of Yvette Mimieux, a blonde beauty with the mind of a pre-adolescent, who catches the eye of Italian George Hamilton, whose father (no joke) is Rossano Brazzi. Hamilton, of course, is miscast as the young Italian, but in all fairness he doesn’t feel nearly as out of place as Warren Beatty in The Roman Spring of Mrs. Stone.

And finally … Watch Government Girl (1943) and you’ll understand why Olivia de Havilland took the Warner brothers’ asses to court. But it’s an RKO release! Yes, Warners loaned de Havilland to David O. Selznick who then loaned her to RKO to star in this infantile comedy co-starring Sonny Tufts. Sonny Tufts??

Believe it or not, Dudley Nichols, whose screenwriting credits include The Informer, Bringing Up Baby, and Scarlet Street, is the credited director.

[1] According to one article on the TCM website, Katharine Hepburn had been another possibility as a Joan Crawford replacement.

8:53 PM THE BOUNTY (1962). This silent promotional short presents footage of the HMS Bounty for the remake of Mutiny on the Bounty (1962), starring Marlon Brando and Trevor Howard. Color. 7 mins.

I saw this in the movies when quite young and really liked it. I just happened to watch it again the other night and it’s not really that good, though de Havilland gives a pretty good performance and a much better one than Davis who just acts up a storm! Hard to believe that Agnes Moorehead was nominated for an Oscar for this waaaay over the top scenery chewing performance, but I guess she is a least campy fun. Even harder for me to believe is that I was disappointed back then that she lost.