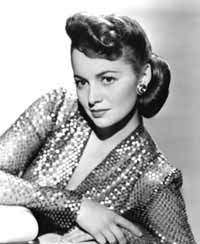 Tonight is the Academy Tribute to Olivia de Havilland (who will turn 90 on July 1). According to the Academy’s press release, the tribute “will feature film clips from many of her unforgettable performances and testimonials from several of her co-stars and long-time friends.”

The Academy will also screen several de Havilland films in the next few weeks, including The Adventures of Robin Hood, Hold Back the Dawn, and Gone with the Wind.

De Havilland will participate in a “conversation” this coming Sunday, June 18, at a screening of The Heiress – the tale of a sweet ugly duckling who grows into an embittered ugly duckling – and in my view, one of her two or three best films, and the best performance of her career. 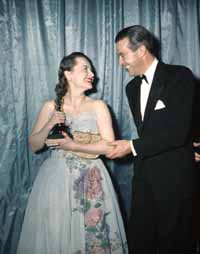 More on Olivia de Havilland: The actress will reportedly write her memoirs for HarperCollins. Editor Maureen O’Brien will work with her on the book.

Last night at the Samuel Goldwyn Theater, Turner Classic Movies (website) host Robert Osborne was on hand to chat with de Havilland, who received three standing ovations throughout the evening.

De Havilland, who at one point wanted to become a teacher, reminisced about a conversation she had with Errol Flynn while on the set of Captain Blood in 1935. Flynn asked her what she wanted to get from life, and her response was, “Respect for difficult work well done.”

The two-time Academy Award winner then added, “You here tonight … have made me feel that, perhaps after all, I have achieved that young dream.”

I finally came to the day in my life that I learned about the woman that I was named after.
Honored to be named after a beautiful awesome actress and singer.

I just recieved a copy of Captain Blood. Please write if you know of any webpages on Olivia de Havilland.